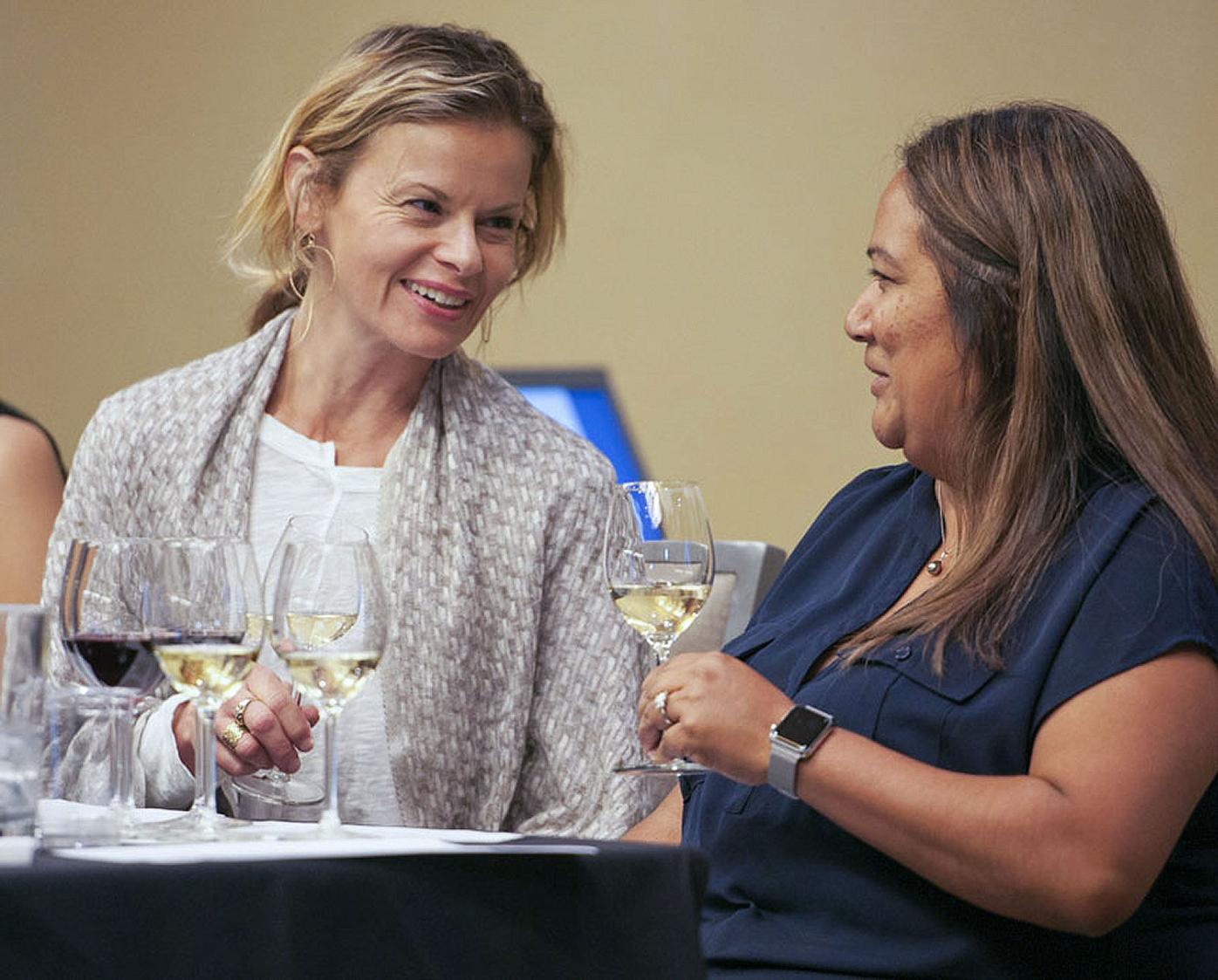 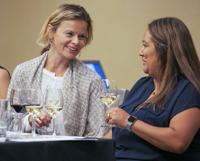 Sonja Magdevski and Tara Gomez talk before the event. 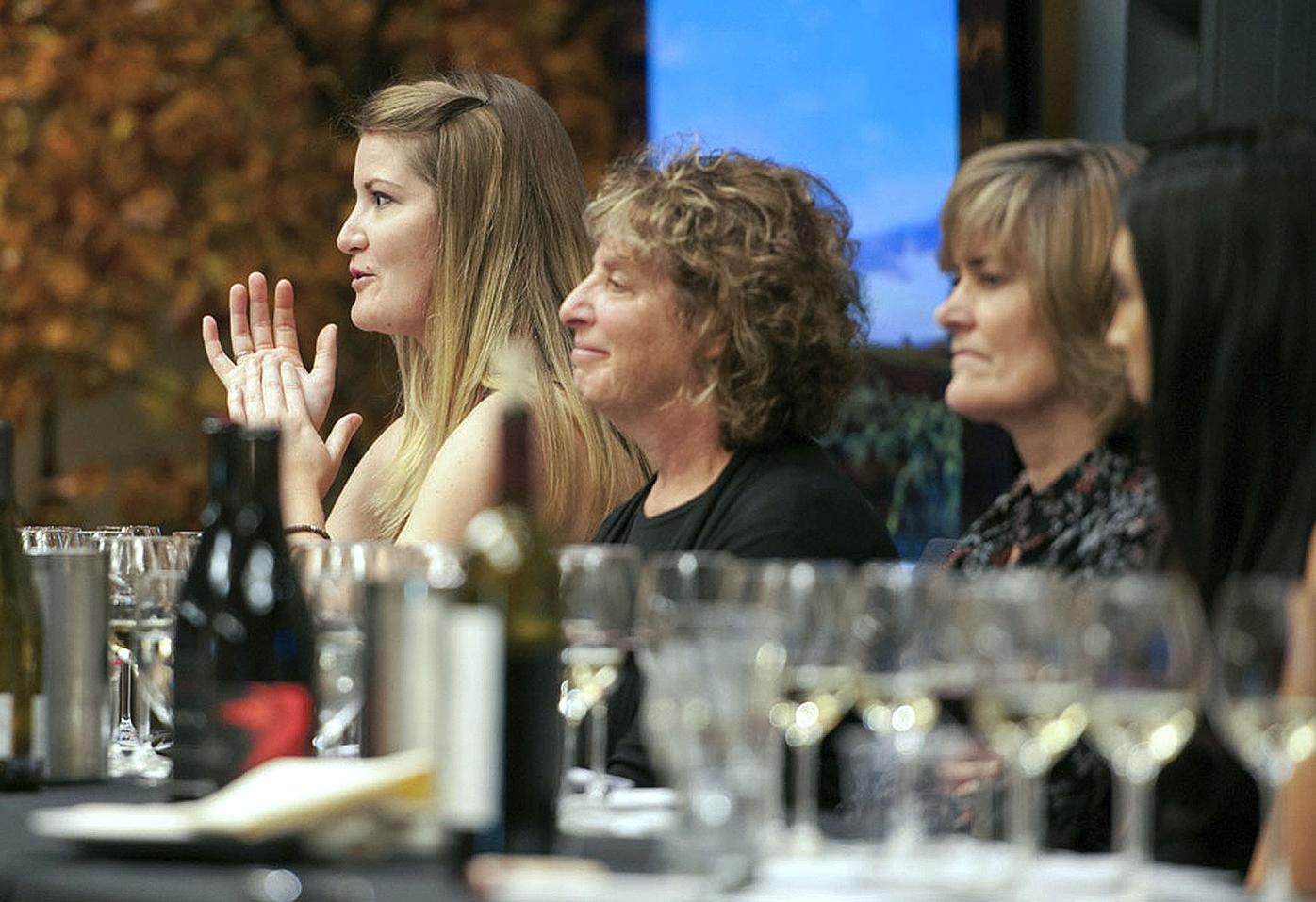 Laura Roach explained how she got started in winemaking. 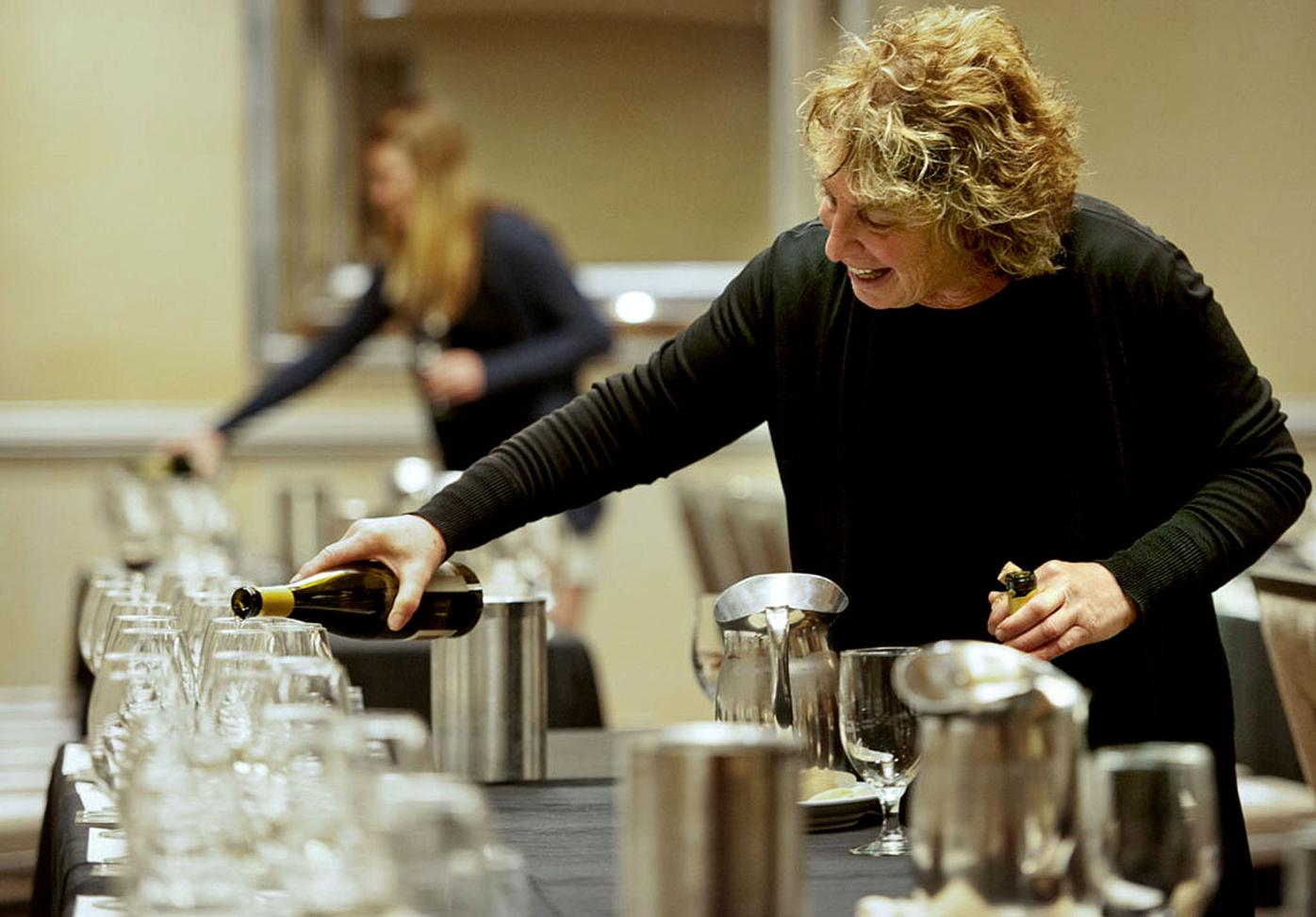 Kathy Joseph, of Fiddlehead Cellars, pours wine for the event. 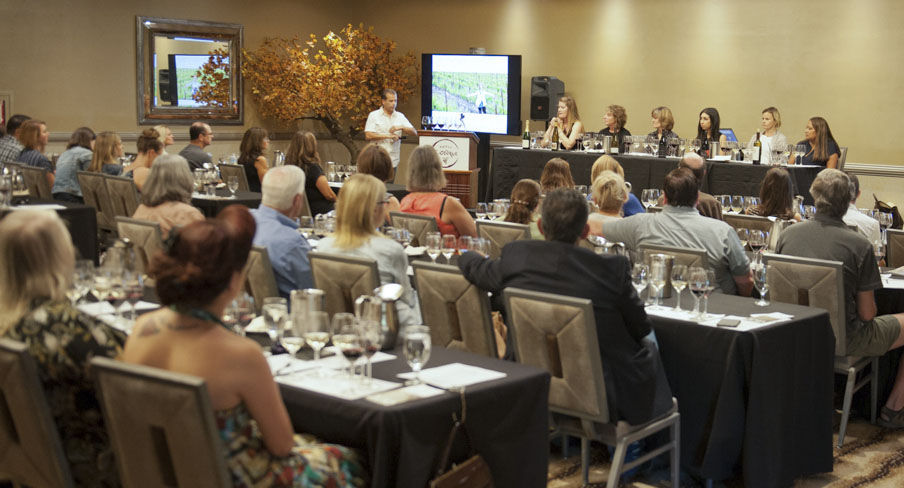 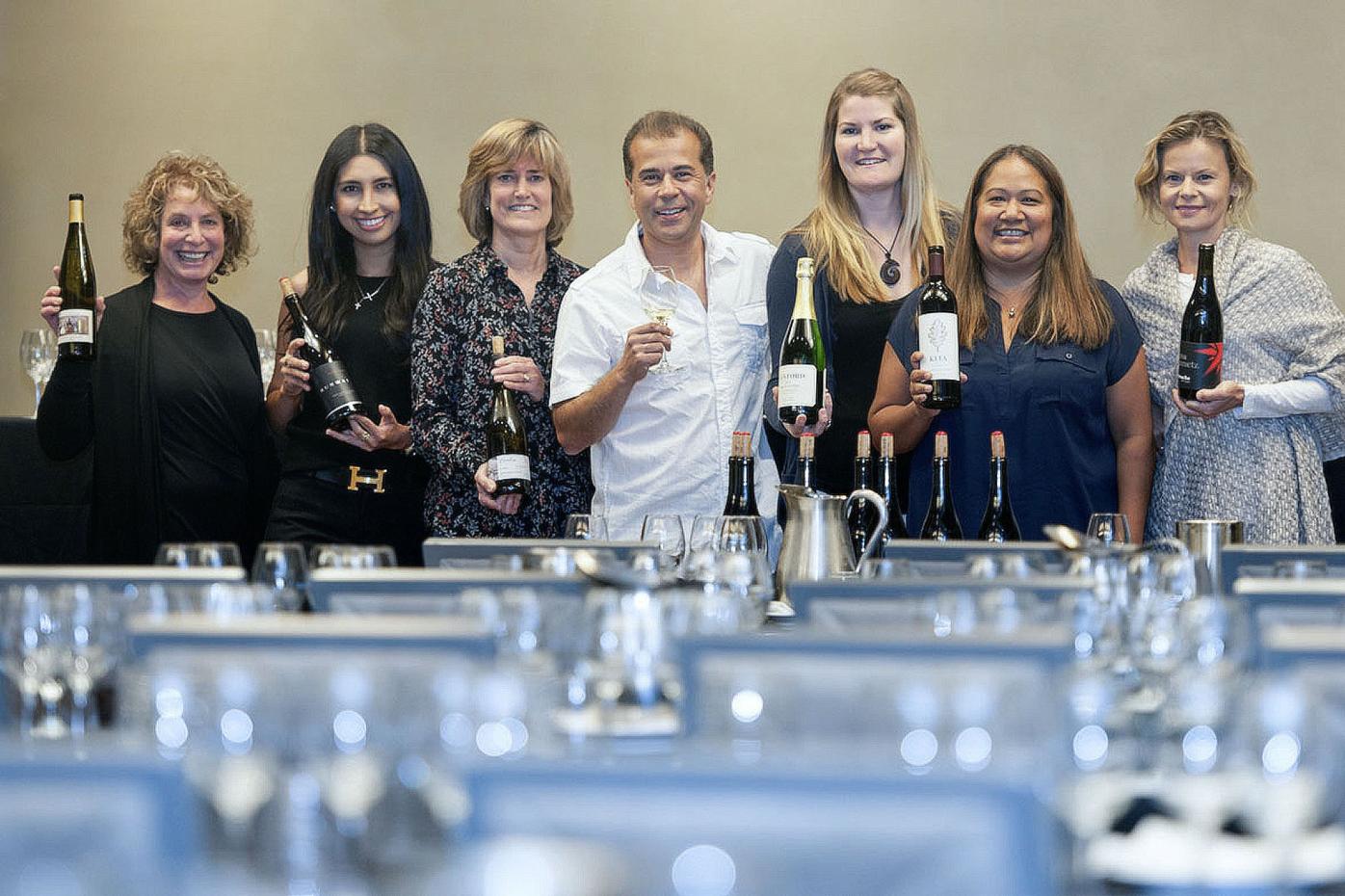 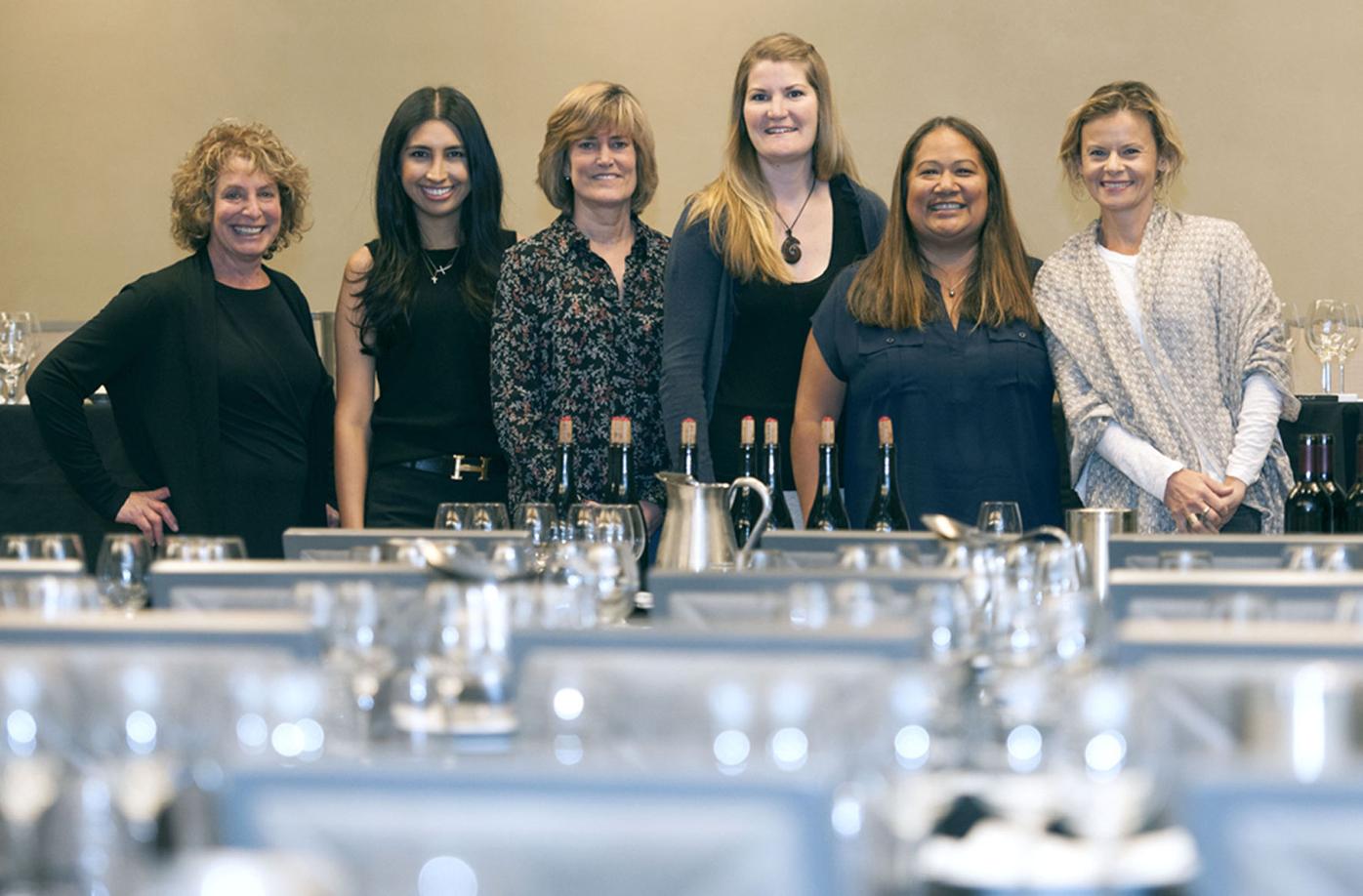 Sonja Magdevski and Tara Gomez talk before the event.

Laura Roach explained how she got started in winemaking.

Kathy Joseph, of Fiddlehead Cellars, pours wine for the event.

Presented by Santa Barbara Vintners and part of the annual Harvest Festival Weekend, it was moderated by national wine writer Gabe Saglie. The diverse panel was made up of veterans and newcomers; young and not-so-young; white, Latina, and Native American; owner/winemakers and corporate employees. They were all low key in terms of breaking the glass ceilings in their cellars. Their focus, instead, was to let their wines speak for them.

Denise Shurtleff has been the winemaker at Cambria since 1999. Cambria is owned by Jackson Family Wines, whose owner/chairman is Barbara Banke, a corporate lawyer who argued several cases before the U.S. Supreme Court. She founded the company with her late husband, wine icon Jess Jackson.

"We're a very female-oriented company," said Shurtleff, who added that she's been assisted by the collaborative winemaking community in Santa Barbara County. "There is still a pioneering spirit here, everybody helping everybody. There is competition, but to me it's a lot less than elsewhere."

Despite her success, Shurtleff acknowledged that winemaking is still very much a male-dominated business, which leads to certain preconceptions by the public. Her husband, she recounted, used to offer to help her pour at tasting events. It would be a fun way for two busy professionals to spend time together, they both thought.

"People would come up to the table and automatically start talking to him about the wine," she said. "He would explain that I was the winemaker, that he didn't work at the winery and was just helping out with the pouring. No matter what he'd say, these people would still directly question him. I would be answering and they'd be looking at him! After a few times," she laughed, "he said, 'I'm not doing that anymore'."

Laura Roach said she found her calling early on. She came to Sanford as the enologist in 2012 and was promoted to assistant winemaker in 2015.

"I know it might make for a better story, but I actually haven't found any resistance as a woman winemaker," she said.

Roach presented Sanford's 2013 sparkling wine to the panel audience. Putting to rest the idea that sparkling is exclusively a special occasion wine, she joked that "we can open a bottle at 10 o'clock in the morning. Really, it's just fine."

Like Roach, Erika Maldonado is only in her late 20s. She's the winemaker at her family-owned Runway Vineyards. Her dad is former California Lt. Gov. Abel Maldonado.

It was her idea to plant grapes on the property that adjoins the world-famous Bien Nacido Vineyards in the Santa Maria Valley. She was only 17 at the time.

"I knew it was a smart business decision to grow grapes," she said. "I thought maybe we could sell the grapes or maybe get someone to make wine. My father's friends loved wine. They'd sit around and discuss where it came from and who made it.  I loved that every wine had a story."

After graduating from Cal Poly and deciding to make wine her career, Maldonado interned with winemaker Paul Lato, who she called a "wonderful mentor," and received advice from local legend, Jim Clendenen, of Au Bon Climat.

Her philosophy, she explained, is to "let the vineyard speak" in all the wines she makes.

Sonja Magdevski, of Casa Dumetz Wines, is an example of the many boutique owner/operator wineries in the region. She bottles about 1,000 cases annually, which she produces from grapes she buys from vineyards owned by others. Her popular tasting room is in Los Alamos.

"There is a great independent spirit in Los Alamos that I love," she said. It carries into Magdevski's focus on grenache along with other Rhone varietals.

"Grenache is an exciting, difficult, challenging varietal," she said in explaining its appeal to her as a winemaker.

While Magdevski only has to answer to herself, Tara Gomez has 132 bosses. Her Kita Wines is owned by the Santa Ynez Band of Chumash Indians. The 1,400-acre Camp 4 property, which the tribe purchased from the late Fess Parker in 2010, included a 250-acre vineyard.

"It took a lot of convincing for the tribe to get into this project," she said. "The purchase of the 1,400 acres was solely for tribal housing. The vineyard was just a piece of it and wasn't why the tribe purchased the property."

Gomez had already been making wine for several years at that time, in Paso Robles and in Spain.

"You're always learning. If you stop learning, you're not a true winemaker anymore."

She makes her wine in Lompoc.

"I'm not only the winemaker but I also do the budget and have meetings with the CEO and other members of upper management."

Gomez has now convinced her bosses that Kita should have its own tasting rooms. She hopes to open one onsite in Lompoc and another offsite in the coming months.

The vivacious Kathy Joseph, owner/winemaker at Fiddlehead Cellars, is a local legend. Her status comes not just because she was one of the earliest women to take up the profession in Santa Barbara County, but because of the impact she had on bringing the Sta. Rita Hills and Happy Canyon American Viticultural Areas (AVA) into existence, and as one of the earliest proponents on pinot noir and sauvignon blanc wines from the region.

"It's exciting to see so many women coming into wine," she said as she glanced at her fellow panelists. Joseph started her winemaking career in Napa in 1981. Her first vintage in Santa Barbara County was 1989.

Her role as a local innovator is continuing, Joseph said, with her introduction of her 2014 gruner veltliner. It received one of its first public tastings at the panel event. The signature white wine of Austria, there are only a very few acres of gruner planted locally. Joseph made 350 cases of her inaugural gruner. It's an understatement to say she's enthusiastic about it.

"I'm really excited to share a new varietal," she said. I try to make wines that are very textural. I want all my wines to be elegant and supple and silky on the palate, and true to the varietal. That is the style of winemaking I try to impart."

She confessed that her sales manager is challenged by her cheerleading around the varietal. But it doesn't bother her in the least.

"If you don't have personality, if you don't have something that excites you that you can share the love with, then you are going to miss the boat," Joseph said. "It's not a female thing. Everybody thinks I'm insane doing this. And I'm just thinking, how much fun is this!"