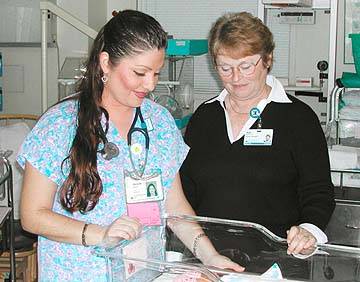 Ruth Malengo, the manager of the perinatal unit at Marian Medical Center, right, and Michelle Brown, a licensed vocational nurse, look in on a newborn baby in the hospital/s obstetrics ward. The proceeds from this year/s Butch Simas/Felix Fly M.D. Memorial Tournament will go toward improvements to the hospital/s perinatal facilities. 7 Elliott Stern/Staff 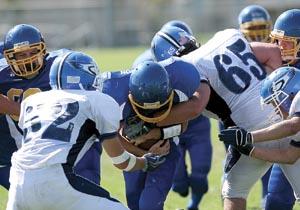 Ruth Malengo isn/t quite ready to hang up the Gone Fishin/ sign just yet.

She/s close but it won/t go up on her office door at Santa Maria/s Marian Medical Center until the end of the month.

"We deliver about 220 babies a month," Malengo said Thursday afternoon from her office in Marian/s Perinatal Unit. "I always like to says that it/s 11 kindergarten classes that we deliver every month."

For the past 8 years, Malengo has been the Perinatal Unit Manager at Marian. She/s been a nurse for 38 years, the last 31 of them at Marian.

Malengo oversees a staff of 100 people who work in the hospital/s Obstetrics, Newborn Nursery and Labor and Delivery units.

"Our mission really is caring for the mothers through the birthing process and preparing them to take home their babies," Malengo said.

That mission will get a boost on the golf course on Monday, March 29 7 just before Malengo/s official retirement at the end of the month 7 when the 15th annual Leland "Butch" Simas and Felix Fly, M.D. Memorial Golf Tournament will be played, once again, at the Santa Maria Country Club.

The tournament honors the memory of two special Santa Maria men, each known for their love of and devotion to the community.

It also brings together 144 golfers and more than 50 volunteers for a round of golf, a day of fun and a special cause.

The event is played as a four-person scramble with a shotgun start. Teams can compete for low gross or low net. There will also be prizes for golfers with shots closest to the pin or the longest drive.

The tournament raises between ,25,000 and ,30,000 every year 7 dollars that are earmarked for a different area of the hospital.

"I can easily spend that money," said Malengo with a laugh. "It will be used to upgrade our equipment and bring in new technology. That/s important so that we can give the best care to our patients."

"We have a full range of pre-natal education classes where we teach not only mothers and fathers but even have classes for siblings. We provide information and education after the baby is born as well to get them a good start in life," Malengo said.

While the tournament is still two-and-a-half weeks away, the field is already full.

"It/s a sell-out," said tournament co-chairman Dr. Chuck Merrill. "But we can always use more sponsors."

Those sponsorships are available by calling the Marian Foundation at 739-3595.

The foundation will also accept standby registration for golfers who can get into the field only if one of those already signed up can/t make it.

As for her plans for retirement, Malengo says, "My husband and I are going fishing. We love to fish in the ocean. He also scuba dives, so I/ll bring along a few good books to read while he/s under water."

Before the Gone Fishin/ sign goes up, however, Malengo is going golfing. While she won/t play, she will be one of the many volunteers at the Marian Tournament.

Power Rankings: See which area basketball teams hold down the No. 1 spots this week

At this point in the high school basketball season, just about all the teams have figured out their strengths and weaknesses and where they st…

Righetti needed two made free throws from Alex Paquet in the last three seconds to edge Nipomo 60-59 at Righetti Dec. 17. No such heroics were necessary for the Warriors this time.

A quick goal and an early red card.

Rob Golden wasn't around to coach the Righetti High School boys soccer team last season. And he can't say where he was. That's because Golden was deployed overseas as a member of the United States Air Force.

The Knights were led by juniors Jincho Rivera, Steven Vasquez and Sam Bazunga. Rivera, an agile wing player, scored an easy 20 points, rarely needing to dominate possession of the ball to get his buckets.

Ruth Malengo, the manager of the perinatal unit at Marian Medical Center, right, and Michelle Brown, a licensed vocational nurse, look in on a newborn baby in the hospital/s obstetrics ward. The proceeds from this year/s Butch Simas/Felix Fly M.D. Memorial Tournament will go toward improvements to the hospital/s perinatal facilities. 7 Elliott Stern/Staff