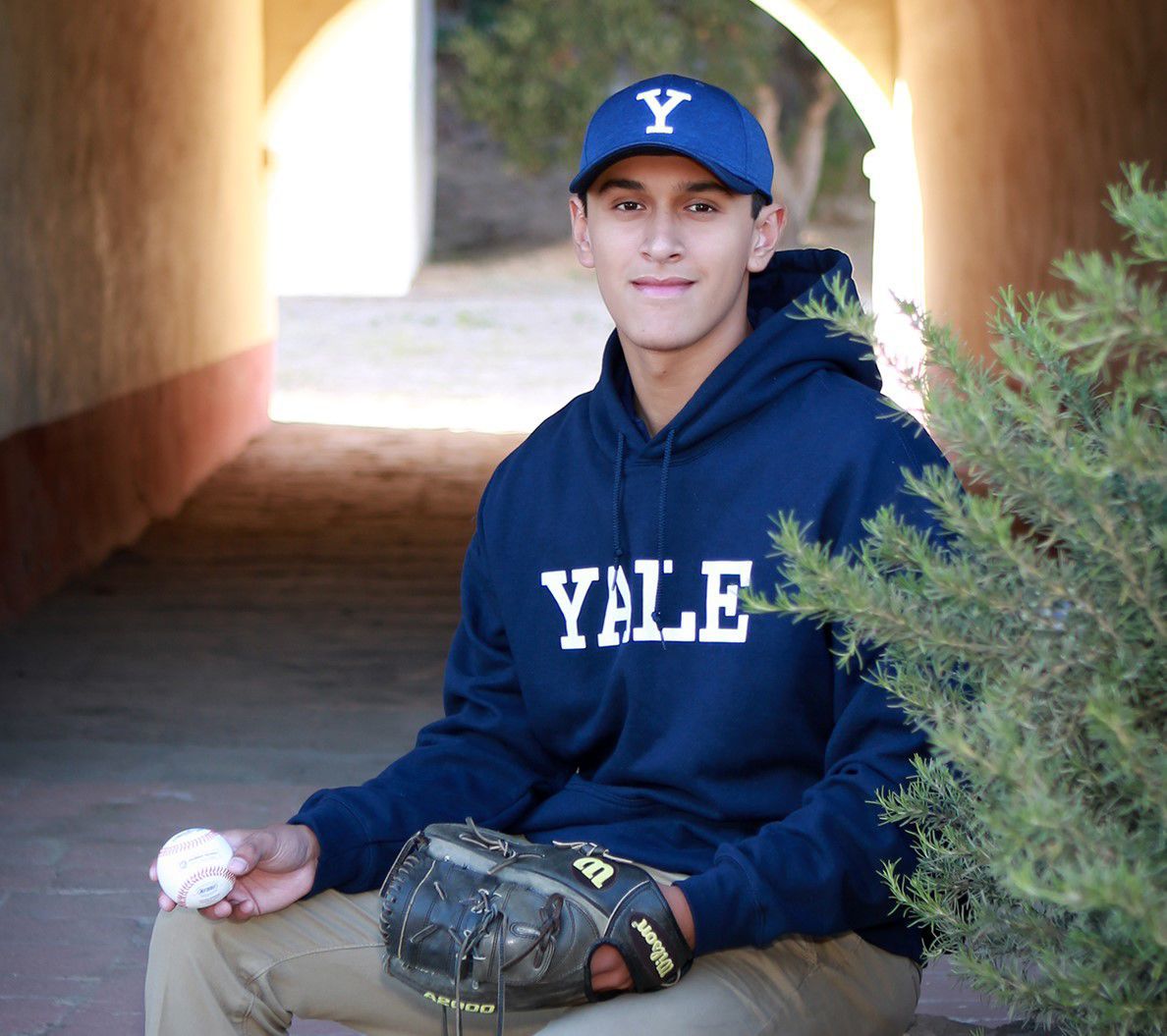 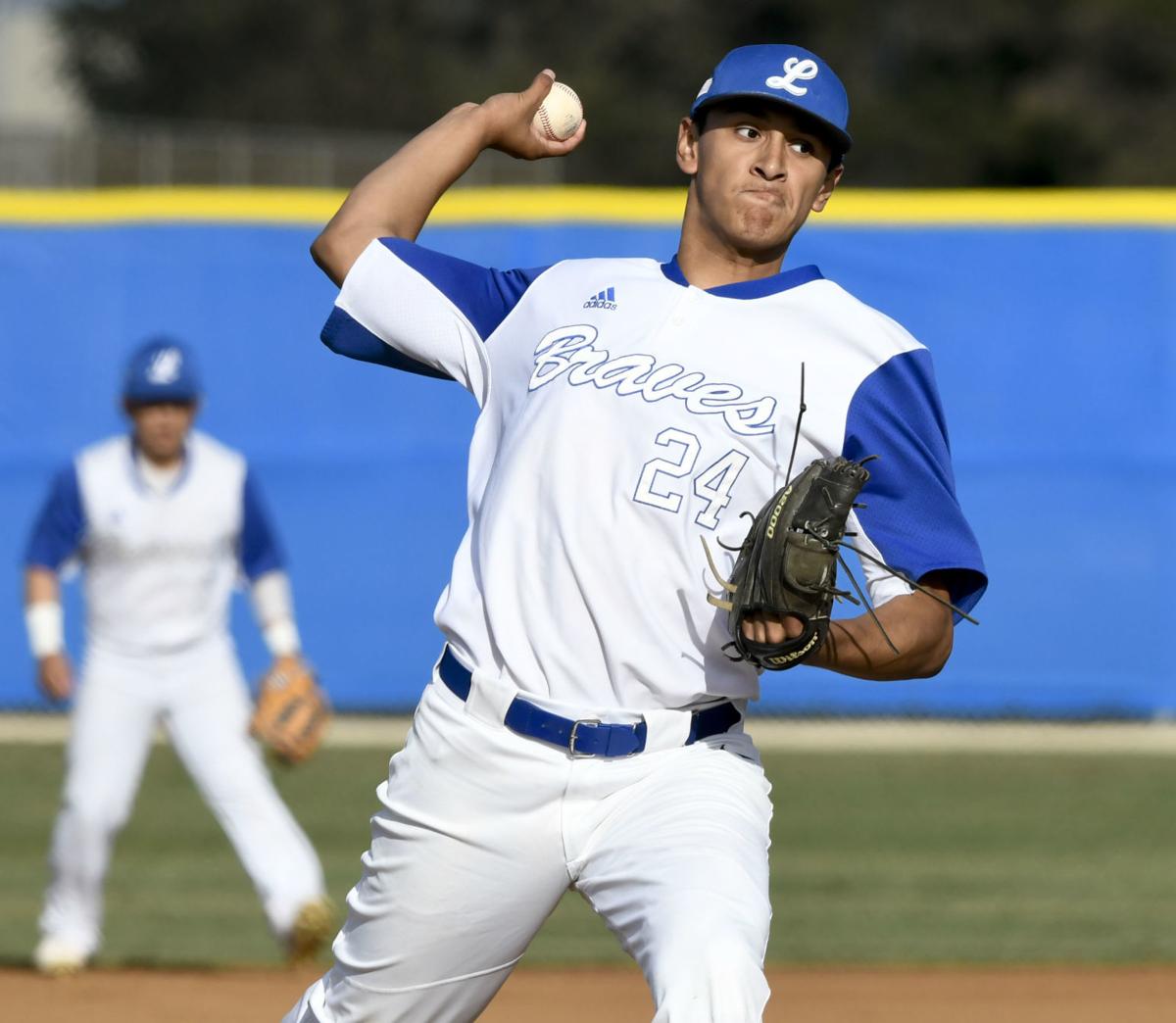 Lompoc's Oscar Rojas pitches against Cabrillo at Lompoc High School in March. It would be one of Rojas' final appearances for the Braves as their season was suspended and ultimately canceled soon thereafter. 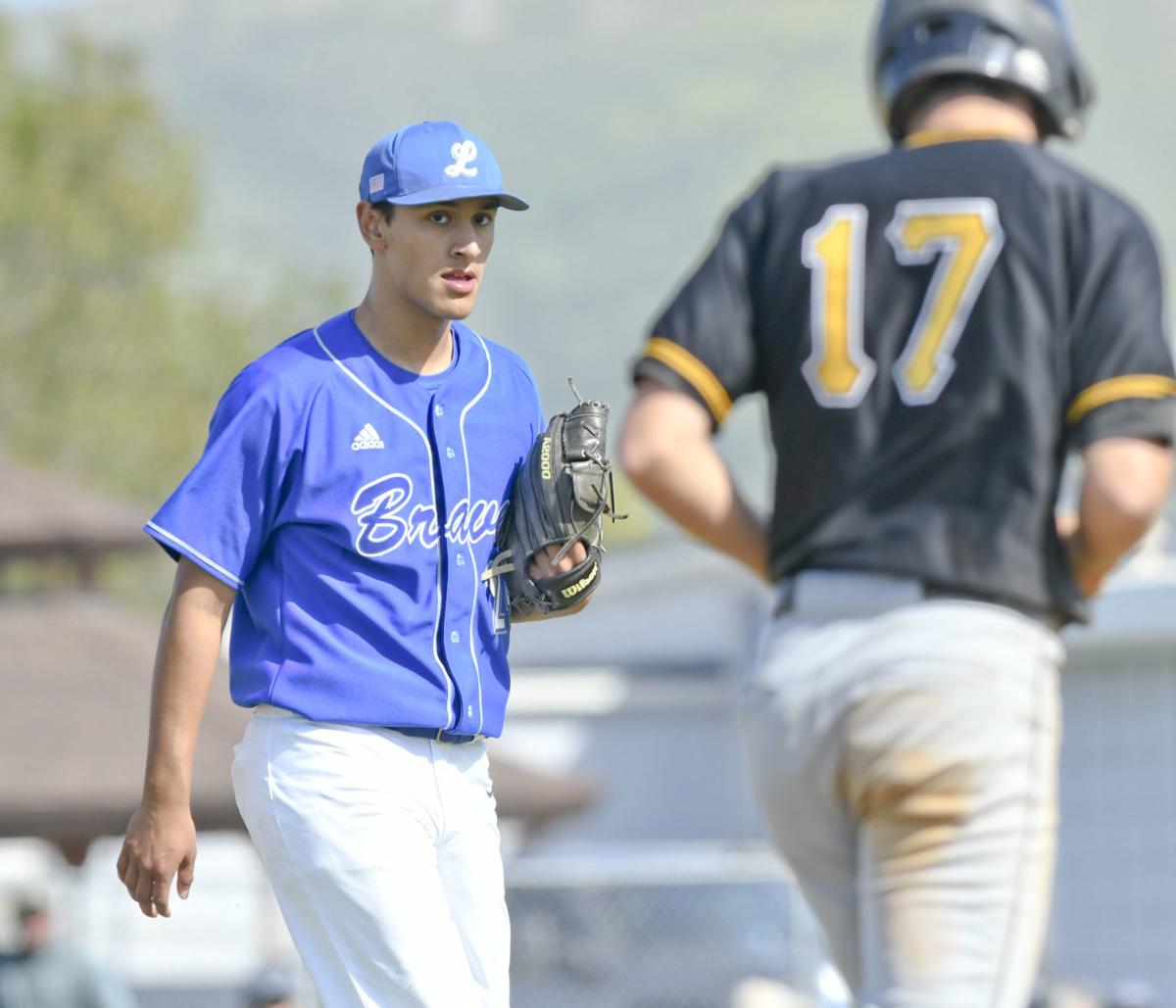 Lompoc's Oscar Rojas looks at a stranded Ventura runner after he struck out a Cougar hitter with the bases loaded for the third out during a playoff game last year. Rojas has committed to pitch for Yale.

As far as where to go to continue his education, Lompoc High School senior Oscar Rojas figured Yale had an unbeatable combination.

“Ever since I was young, I wanted to go to an Ivy League school,” said Rojas. “And Yale has a Division I baseball program.”

As for his pitching, the right-hander won 23 games at Lompoc from his freshman campaign to a truncated senior season.

The Braves’ 2020 season was done after seven games when schools across the state closed in March because of the coronavirus outbreak.

Rojas was the Lompoc nominee for the 2020 Male Scholar Athlete honor for the Northern Santa Barbara County Athletic Round Table.

The organization’s annual awards dinner, where honors are announced and scholarships are awarded, was cancelled because of COVID-19.

Rojas seemed confident that he will be able to report to the Yale campus as scheduled in August for the 2020 fall semester, despite the pandemic.

“Their campus is amazing. I feel like I’m at home there.”

He pitched a complete game in Lompoc’s last playoff win, a come-from-behind win against Ventura in a 2019 wild card game at Lompoc.

Rojas said he wants to be active in politics, as an attorney, when his baseball playing days are done. Rojas will study pre-law at Yale.

Rojas has been active in student government at Lompoc. He has been an ASB class president, vice president and representative.

“I would say I’m a moderate,” on the political spectrum, Rojas said.

“I find politics fascinating, and a very practical way of helping people,” Rojas said on his Round Table scholarship application.

He said he has not been able to throw on his own since spring sports statewide shut down in mid-March.

“I don’t think the NCAA allows that,” said Rojas.

He did say he continues to work out. “I have weights at my house, and I work out as much as possible to try to stay limber, try to stay in shape.”

Like everyone else, Rojas is working to adjust to the new normal he has been thrust into since schools closed in March.

“I prefer the classroom, with the interactions between students and teachers, but I’ve adjusted to online learning,” he said.

Our Senior Spotlight series highlights high school student-athletes who have had their senior years disrupted due to the coronavirus pandemic. Oscar Rojas is one of Lompoc High's top students, with a 4.50 GPA, and one of its top athletes. He will attend Yale in the fall.

Even with pandemic, Ashley Reynoso looks toward a promising future with Cal State Monterey Bay

A shoulder injury cut the sophomore's freshman collegiate basketball season short. She said the shoulder is healed now, and that is part of the reason why Reynoso's outlook is sunny.

Despite the circumstances, the mood was festive for Lompoc High School's celebration, which took place in the parking lot south of Huyck Stadium. Graduates waited in vehicles with their loved ones before exiting one at a time to cross either of two small makeshift stages on which graduates received their diploma covers and posed for photos.

Lompoc's Oscar Rojas pitches against Cabrillo at Lompoc High School in March. It would be one of Rojas' final appearances for the Braves as their season was suspended and ultimately canceled soon thereafter.

Lompoc's Oscar Rojas looks at a stranded Ventura runner after he struck out a Cougar hitter with the bases loaded for the third out during a playoff game last year. Rojas has committed to pitch for Yale.