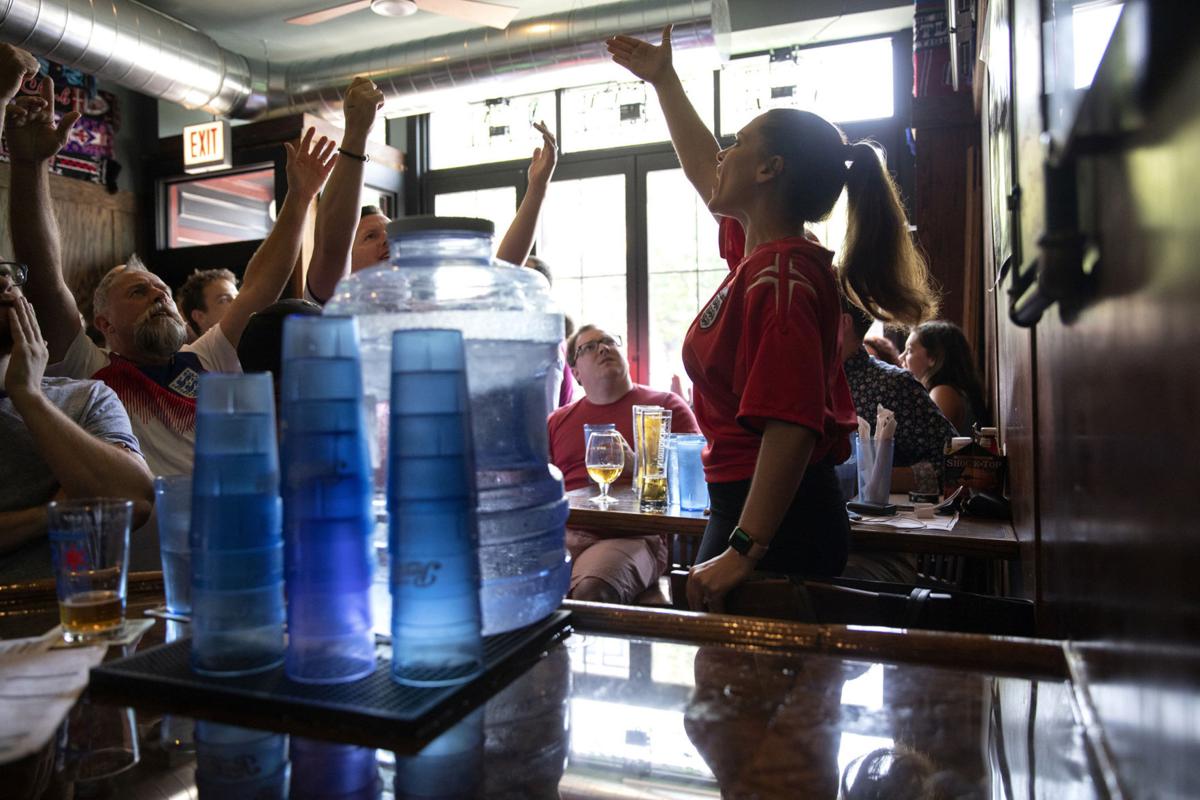 Rebecca Russell, of Surrey, England, shouts with other fans as they watch the World Cup semifinal game between Croatia and England on July 11, 2018 at The Globe Pub. (Erin Hooley/Chicago Tribune/TNS) 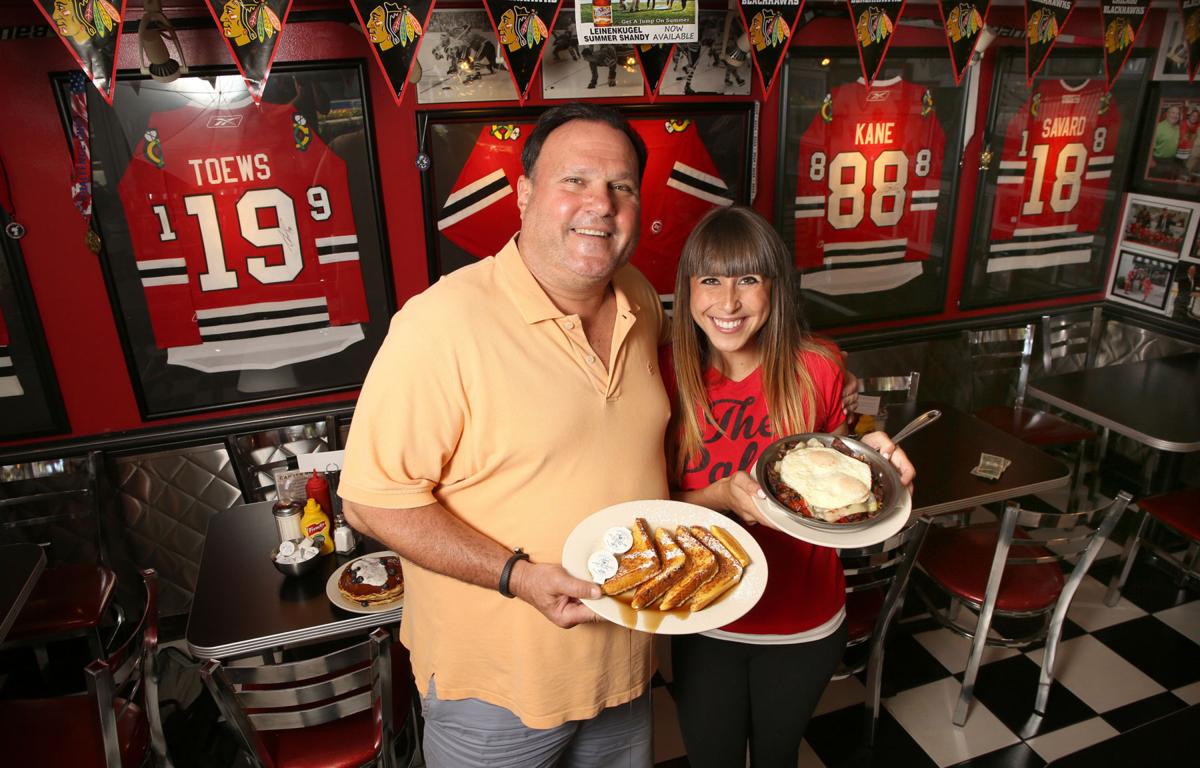 CHICAGO - A few weeks ago, when the coronavirus still lived somewhat in the backdrop of the national consciousness, Palace Grill owner George Lemperis worried that business at his Blackhawks-themed diner near the United Center would slide a bit because of the hockey team's fading playoff hopes.

Then, about a week and a half ago, he knew his bottom line would take a hit when the NHL and other leagues halted their seasons, just as U.S. coronavirus cases began to spike and the World Health Organization declared the COVID-19 outbreak a pandemic.

And on March 15, Lemperis was at a friend's birthday party when the worst-case scenario happened: Gov. J.B. Pritzker closed Illinois bars and restaurants to sit-down customers in an effort to stem the spread of the virus.

"I had to leave (the party). I was crying. I was sitting at his birthday party crying. 'What are they doing to us?' " Lemperis said he wondered at the time.

Will's Northwoods Inn general manager Kevin Kruse feels Lemperis' pain. Kruse had to postpone indefinitely the establishment's Packerpalooza, an annual meet-and-greet with Packers fans and players such as Davante Adams and Jake Kumerow that was scheduled for April.

"With this virus going on, it hurts," he said. "We would be selling a lot more stuff. People aren't coming in and buying merchandise right now."

Kruse and Lemperis echoed the concerns of several owners and general managers of Chicago's more than 7,500 bars and restaurants who wonder how long they can stay afloat under a shutdown, concerns that only heightened Saturday with Pritzker's "stay at home" order for residents through April 7.

"You take like a Moe's Cantina or Hubbard Inn or something like that, they do big (business) during March Madness, right? They were already losing sales before we went down on the shutdown of restaurants," said Sam Toia, president of the Illinois Restaurant Association, which represents the state's more than 25,000 bars and restaurants and their 588,000-plus employees. "Sales were off 40 percent to 70 percent before the governor informed us that he was going to shut bars and restaurants down."

Toia said that unlike businesses that sell goods, the food service-hospitality industry - the state's largest private sector employer - can't make up for time lost waiting out the coronavirus outbreak.

"What are you going to do, eat out seven times three or four months from now to make up for the lost sales?" he said. "2020 is shot for the restaurant-hospitality industry."

The National Restaurant Association warned of $225 billion in losses over the next three months, as well as the loss of between five million and seven million jobs, in a letter asking President Donald Trump and members of Congress for relief.

"I would imagine most restaurants have a month or so, and then they shutter forever," U.S. Rep. Mike Quigley said.

The Chicago Democrat is one of several House members working on a package for small-business relief.

The federal Small Business Administration is offering low-interest loans of up to $2 million for businesses with fewer than 500 employees, and in Chicago, Mayor Lori Lightfoot announced a $100 million loan-relief package.

But Quigley said more will be needed.

"We're going to have to find a way (for restaurants) that's - this isn't a loan, this is direct assistance, to keep the lights on - available through some easier process than applying for a loan," said Quigley, adding that the House Democratic caucus is trying to hammer out a package.

Senate Republicans separately worked on a $2 trillion relief plan, which includes help for small businesses, and the rescue package has been undergoing bipartisan negotiations.

"Obviously small businesses, and restaurants in particular, are an important part of this," said Quigley, a lifelong hockey fan who frequented the West Side's Palace Grill and for "years and years" played at Johnny's IceHouse across the street.

Until more federal and local aid comes through, Lemperis and other sports bar owners have had to get creative to stay afloat.

The Palace Grill, where dine-in customers are surrounded by Hawks jerseys and autographed pictures of players on the walls, had to start a food delivery service on the fly, something they had never done in 80 years.

"I'm lucky because I have people (in the neighborhood) that came out and supported me in droves," Lemperis said.

Still, he estimates business is down 65%, even with deliveries and keeping only a skeleton staff while asking employees to temporarily work for free.

With one exception - the mother of a young child - "there was not one person that turned me down," Lemperis said, adding he told them: " 'I will make it up to you, I promise.' I'm a man of my word and I will take care of them."

Sports bars and restaurants have been getting by through pickup and delivery of food and packaged liquor. The state has relaxed some rules to allow more businesses with liquor licenses to make deliveries and offer carryout privileges, and many already had that ability through city licenses.

Without those sales, Will's Northwoods Inn would be in dire straits, Kruse said.

"The business would probably have to shutter if it wasn't for that," he said.

Kruse said his bar, a haven for Packers and Wisconsin Badgers fans, has benefited from supportive neighbors in the bar's Lakeview neighborhood.

"They come in, they get their stuff, they're giving us giving us words of encouragement to keep it going - 'We'll see you when this is over' - just stuff like that."

The Globe Pub has seen a similar dynamic.

The North Center neighborhood bar is a hub for fierce Premier League rivals, but soccer fans of all stripes have banded together to help the pub, general manager Megan Daly said.

"People that are getting takeout food and drinks from us are very generously tipping as well," said Daly, who estimates business is down 82% from a year ago. "But I've had some other people reach out to me directly and say, 'Hey, what can we do? Is there somewhere we can send money for the staff?' "

Merkle's Bar and Grill also has relied on to-go orders, but it's not enough to put a dent into general manager Russell Bishop's biggest cost: rent.

"It's bigger than everything (else) combined," he said. "Rent is bigger than payroll. It's about rent right now.

The Wrigleyville bar is near and dear to Iowans, and one of its founders is a University of Iowa graduate.

"One day (16 years ago) we hung the flag and we became an Iowa bar," Bishop said. "We get everyone from Iowa. It's amazing how many (Iowa State) Cyclone fans we get here too. We just have an Iowa gravitational pull."

The NCAA canceled winter and spring sports, and with the unpredictability of the virus and its spread, fall football isn't a given. So college sports bars such as Merkle's share the same hardships and uncertainty as their pro counterparts.

Bishop has scoured his books for place to cut corners, such as cable - because who needs a Direct TV subscription when live sports aren't airing anyway?

"We're trying to work with like 60 or 70 vendors on getting a little bit of relief," he said. "It's funny. You would think we would have nothing to do as a bar owner when we close our bars for 14 days, but ... this is the busiest time of my life.

"I'm busier now than when we're open and not making any money. The irony there is hilarious."

There are no guarantees for when shelter-in-place order will lift, much less when sports will return. But all of the Chicago sports bar managers who spoke with the Tribune were optimistic that once doors reopen, fans will flock back to their watering holes to watch and debate sports.

Kruse recalled one of the last weekend days Will's Northwoods Inn was open to sit-down patrons.

"There (were) two guys that kind of started playing rock-paper-scissors," Kluse said. "It's just the most simple, stupid little activity. But in about five minutes, a crowd had gathered around and they were cheering these guys on and, like, it was weird. I guess (with) no sports on TV, this will happen. I totally expected ESPN to walk in the door and start covering it.

"People just want to cheer for something and have a winner."

Visit the Chicago Tribune at www.chicagotribune.com

Rebecca Russell, of Surrey, England, shouts with other fans as they watch the World Cup semifinal game between Croatia and England on July 11, 2018 at The Globe Pub. (Erin Hooley/Chicago Tribune/TNS)