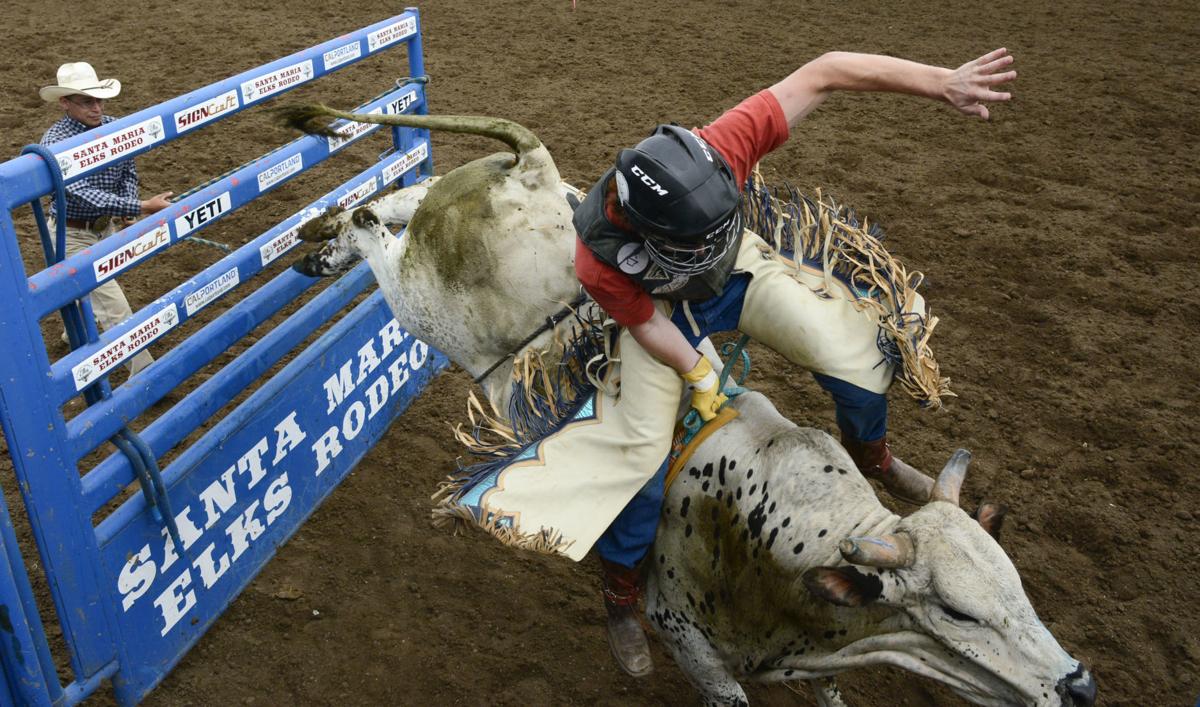 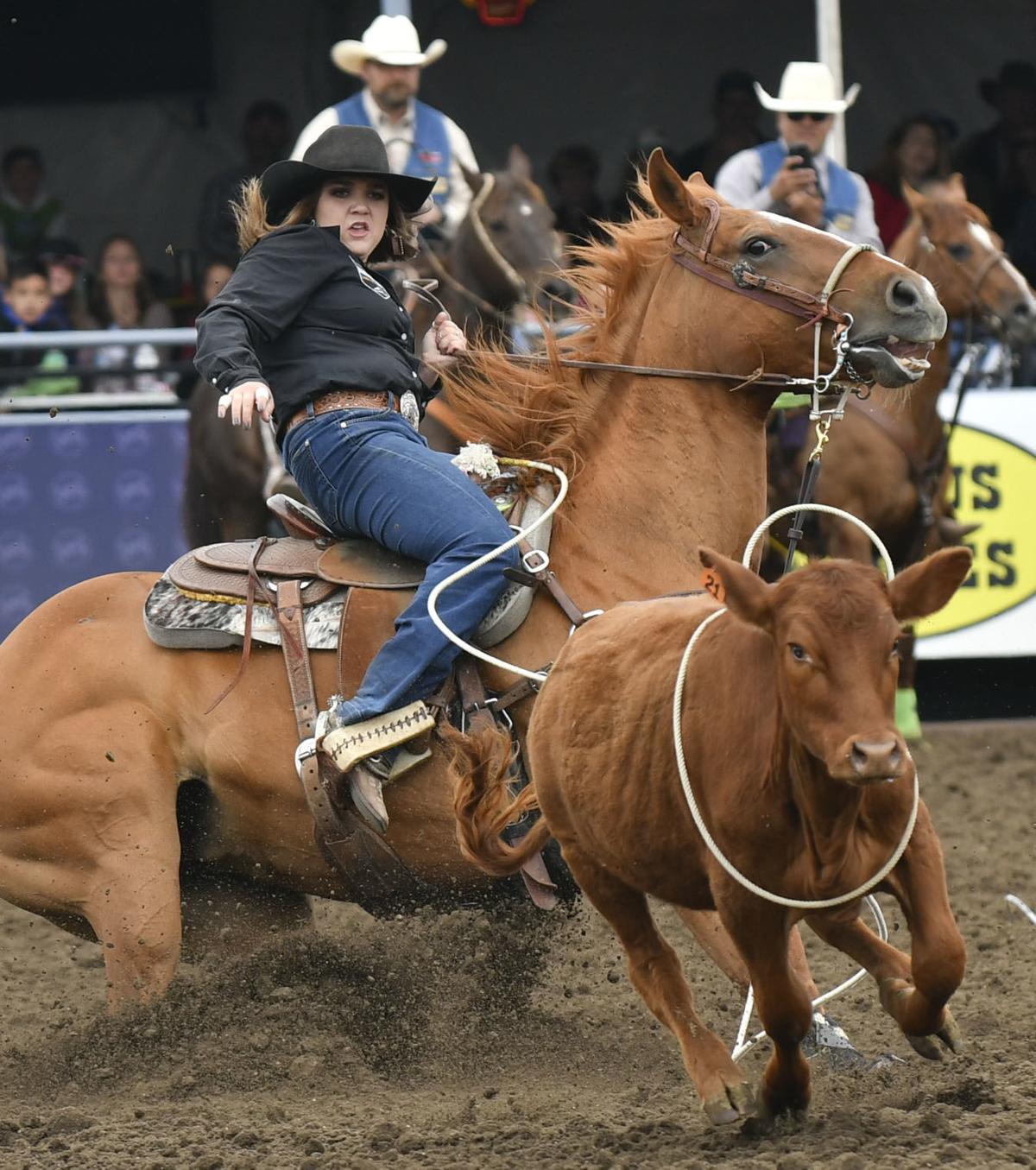 Regan Fowler, granddaughter of the late Clarence Minetti, gets a rope on a calf in the breakway roping at the Santa Maria Elks Minetti Mini Rodeo on Thursday morning. 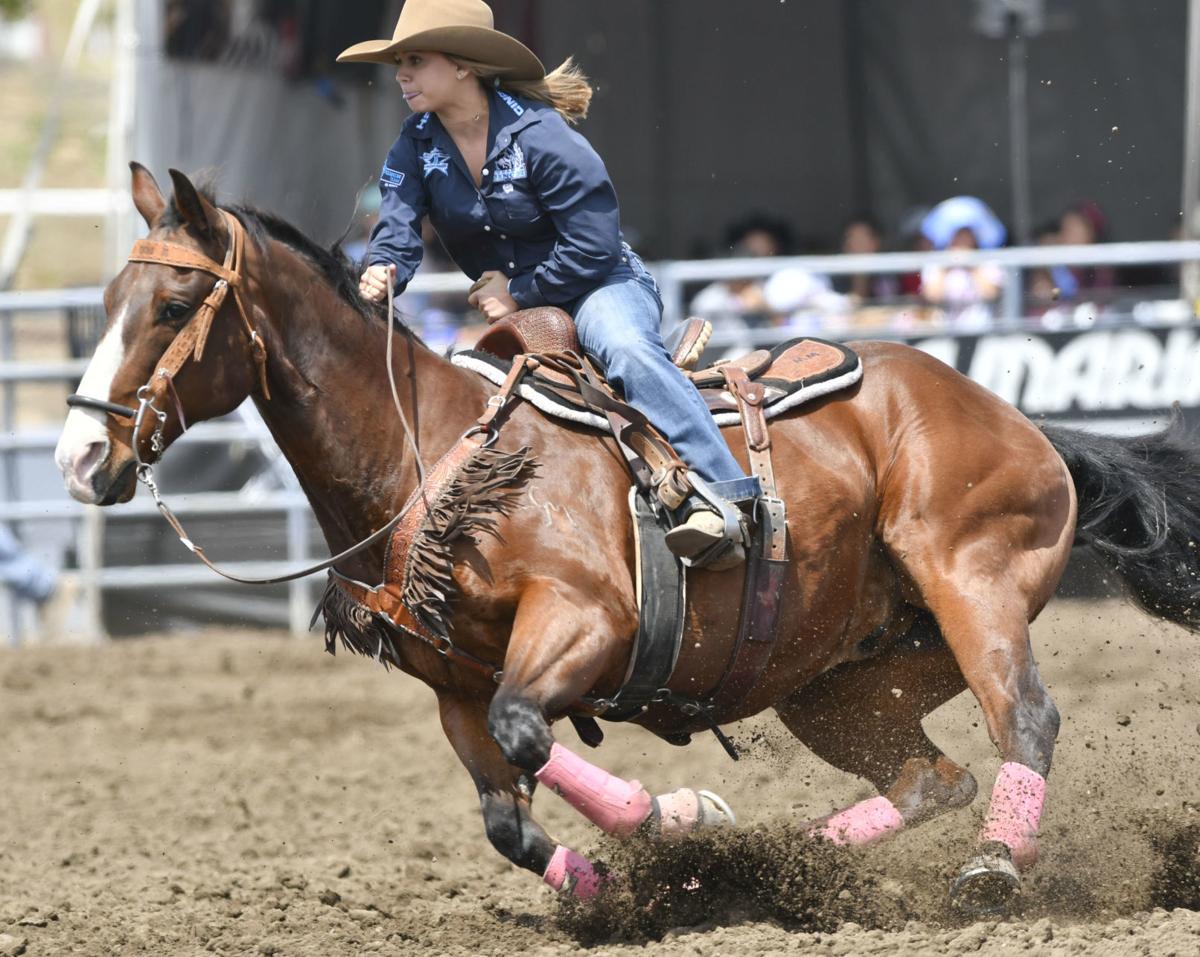 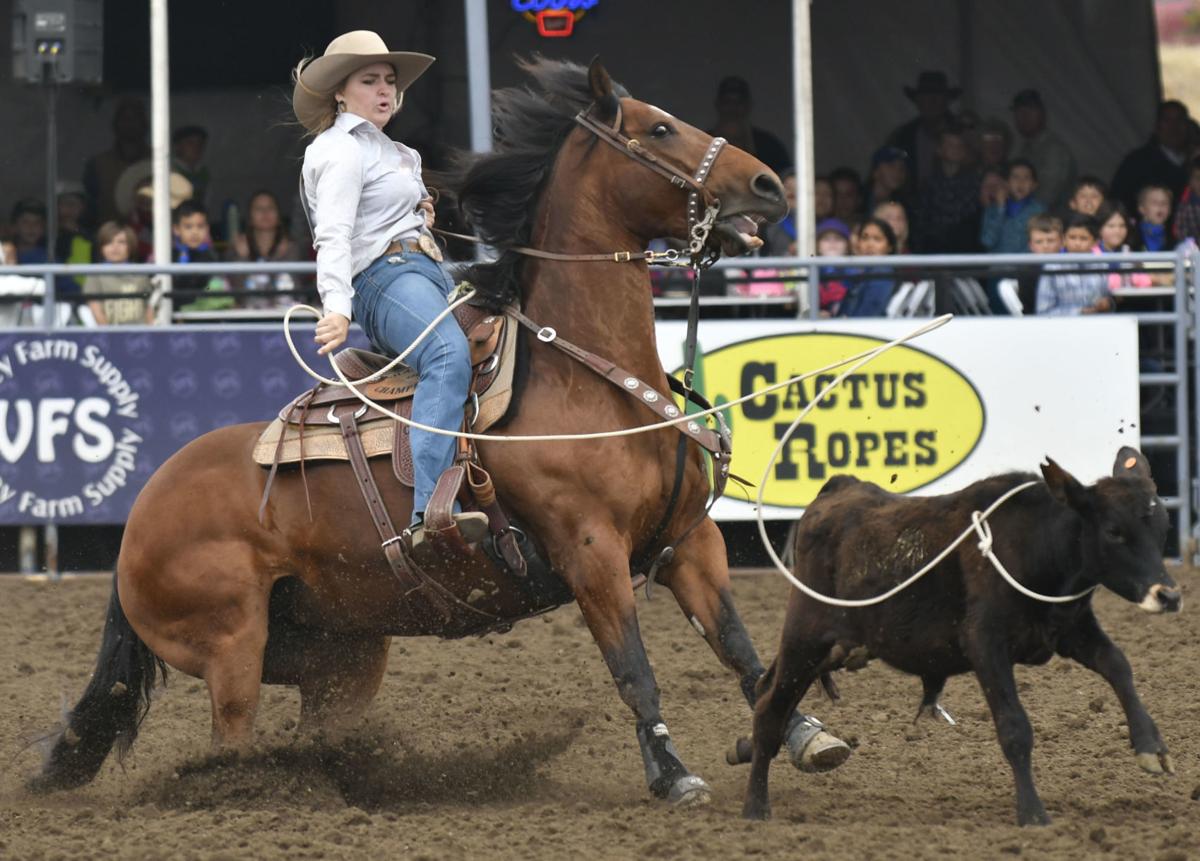 Sammy Massey of Templeton High School lassos her calf in the breakaway roping at the Santa Maria Elks Minetti Mini Rodeo on Thursday morning. She won the 13-17 age group.

A full house on hand for the annual Minetti Mini Rodeo.

This rodeo by the children, for the children, with junior rodeo cowgirls and cowboys competing for championship buckles in breakaway roping, team roping and barrel racing.

And Cal Poly rodeo was in the arena, putting on rough stock demonstrations in saddle bronc and bull riding.

The young competitors each earned their spots in the Minetti Mini Rodeo at the Mini Rodeo qualifier on Sunday, April 14.

The top five in each event were invited back Thursday for their championship runs.

First out the gates were the breakaway ropers.

The 13- to 17-year-old ropers took the first shot in the spotlight.

Sammy Massey, from Templeton High School, was second after qualifying but her 4.54-second run vaulted her to the championship.

Junior team roping was next into the arena with five of the eight finalists hailing from Templeton High.

Usher was a regular at the Minetti Mini Rodeo but the 2018 Mini was the last time he was eligible for Minetti championships.

Now a freshman on the Cal Poly team, it was his first chance to ride a bucking bronco before a live crowd.

“I’ve mainly been a steer wrestler so this is my first time riding a bucking bronc in a rodeo,” said Usher “It’s always great to be out here at the Elks Rodeo.”

Poly’s bull riders didn’t fare any better — they showed just how rough rough-stock riding can be.

Paul Vos, Jake Fellom and Arroyo Grande’s Cole Tart were each introduced to Silva’s masterpiece just seconds into their rides.

The one bull rider who brought the crowd to its feet was Kipton Oliveira.

And Oliveira is just 9 years old.

He rides mini-bulls and has already qualified for the World Bull Riding Finals in Abilene, Texas, and the IMBA Finals in Las Vegas.

Then it was back to the Minetti competition with barrel racing in the arena for the final go-round.

“It feels good to win,” said Gamble. “I was scared because I was going so fast but it was still a lot of fun.”

Gamble will be back for the Elks team roping where he’ll team up with his grandfather, Poppa John Rivas.

“In the breakaway, I just ran up there and caught my calf,” said Grant. “I just went as fast as I could in the barrel race. It feels good to win and I had a lot of fun.”

Makenna Machado had an adventure in her championship ride in 14-17 barrels.

Machado hit the second barrel, tipping it up in the air. It balanced on one edge, seemingly forever, before falling back into place which meant Machado’s 17.12-second run was good for the title.

“I knew I hit it and it was still standing when I got by,” said Machado. “I snuck a look back at the barrel and saw it stayed up. I was happy about that. I get to go back to school next week as a Minetti Mini Rodeo champion.”

A local cowboy competition is just one of the many things that makes the Santa Maria Elks Rodeo unique. Mixed in with all the professionals, the Elks hold their own team roping to determine which twosome wins bragging rights for the next 12 months. On Saturday evening, during the third performance of the 76th annual Santa Maria Elks Rodeo at the Elks Unocal Event Center — the third straight sold out house — the father-son team of Daryl and Billy Vinnedge, from Arroyo Grande, had a 9.0-second run, posting the night’s best time. 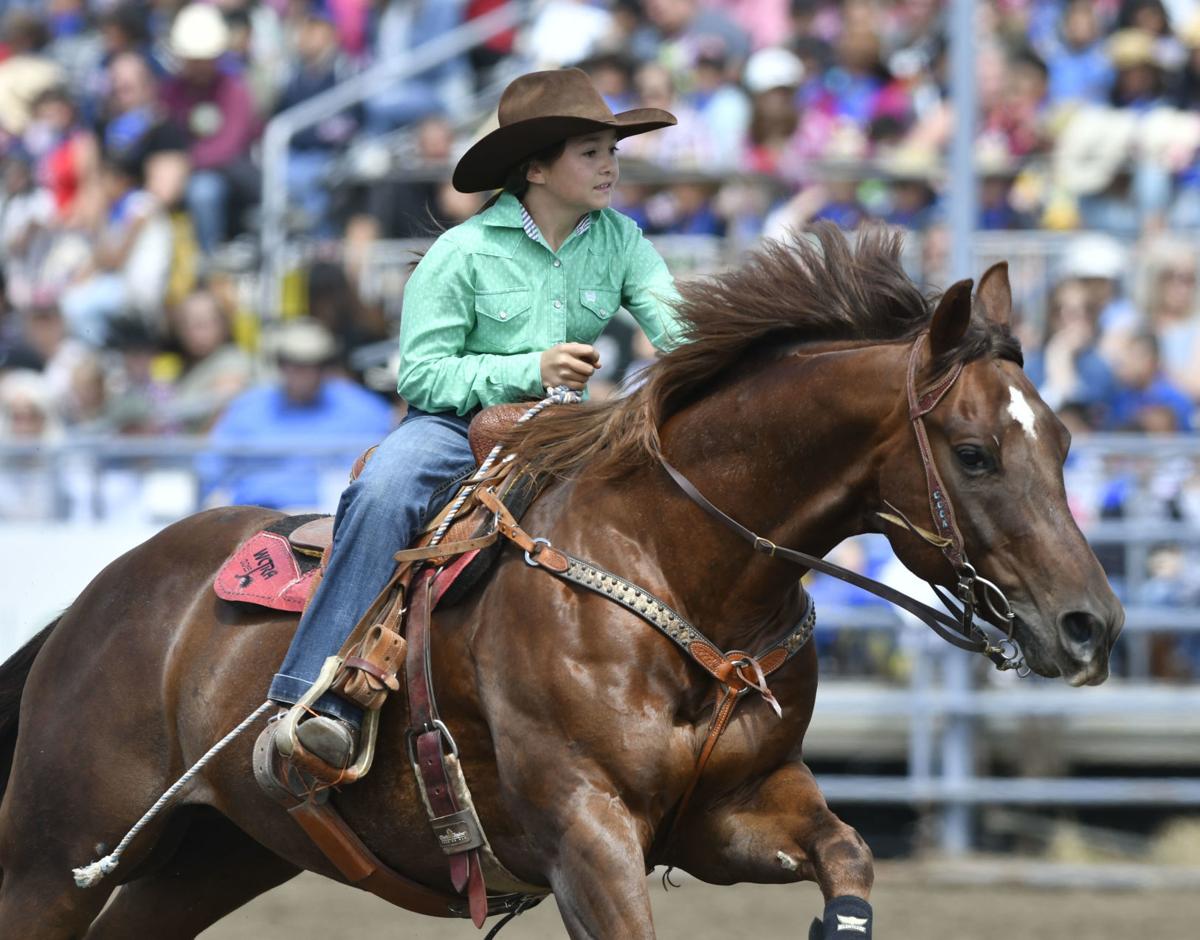 Regan Fowler, granddaughter of the late Clarence Minetti, gets a rope on a calf in the breakway roping at the Santa Maria Elks Minetti Mini Rodeo on Thursday morning.

Sammy Massey of Templeton High School lassos her calf in the breakaway roping at the Santa Maria Elks Minetti Mini Rodeo on Thursday morning. She won the 13-17 age group. 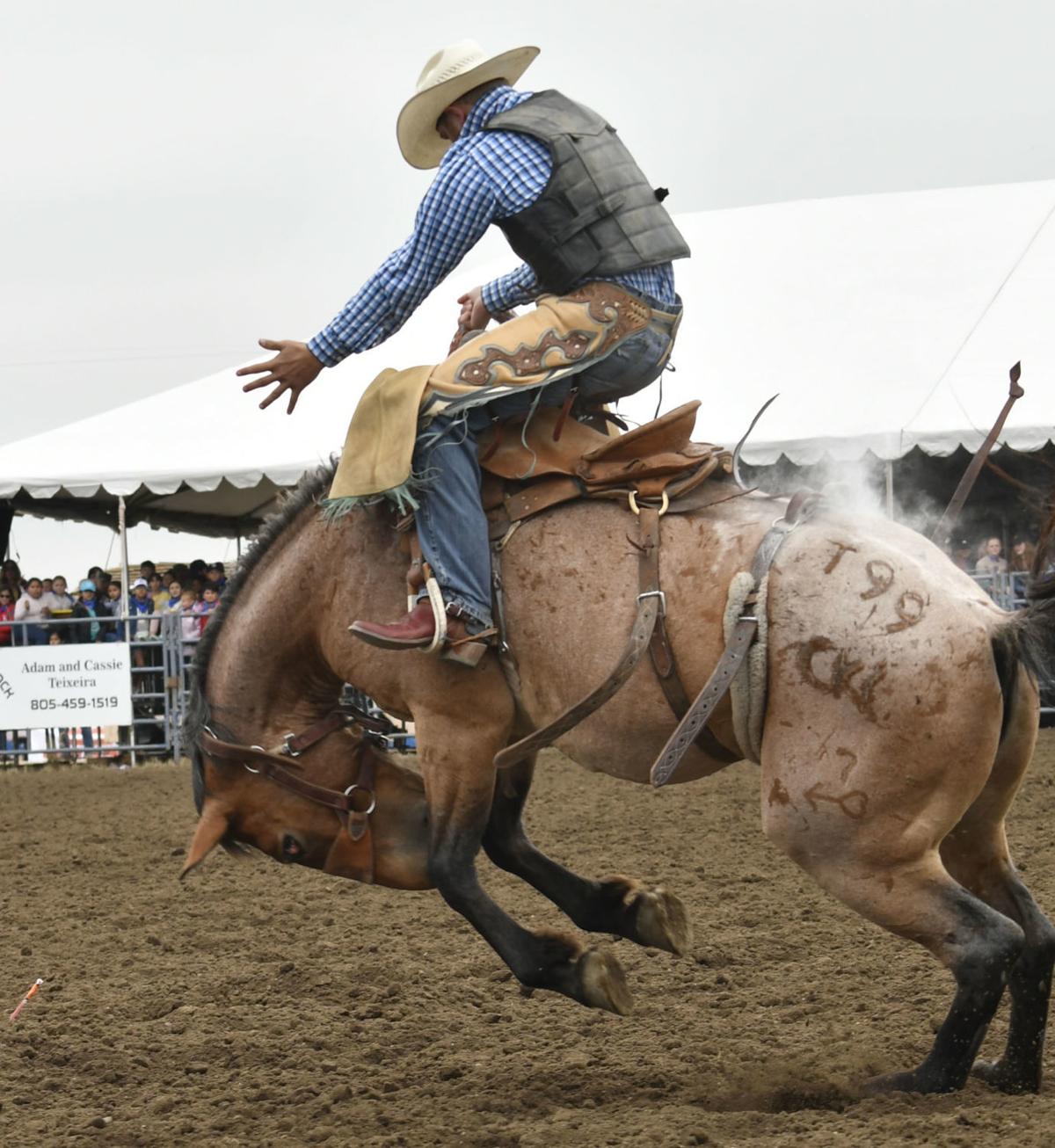 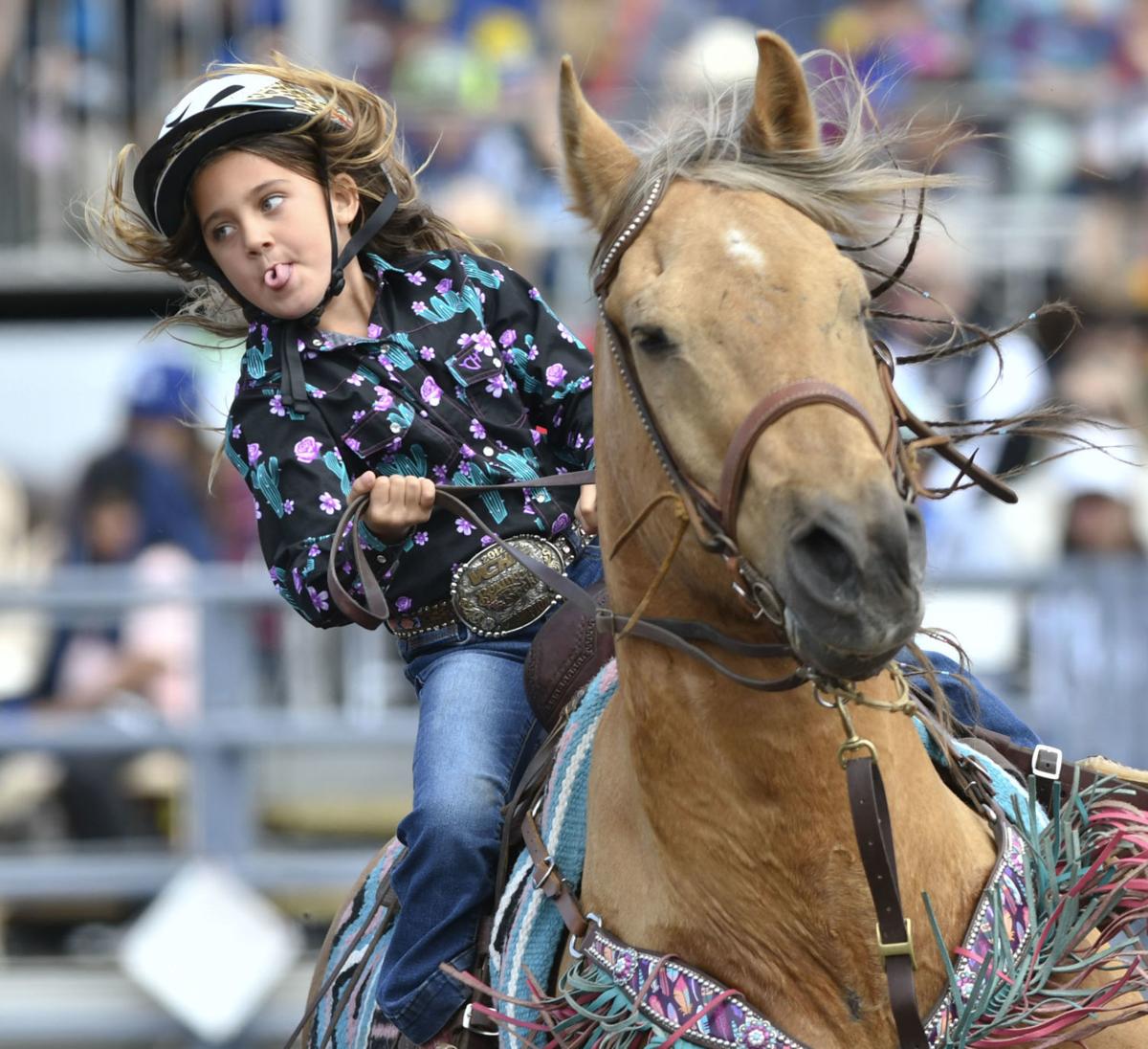