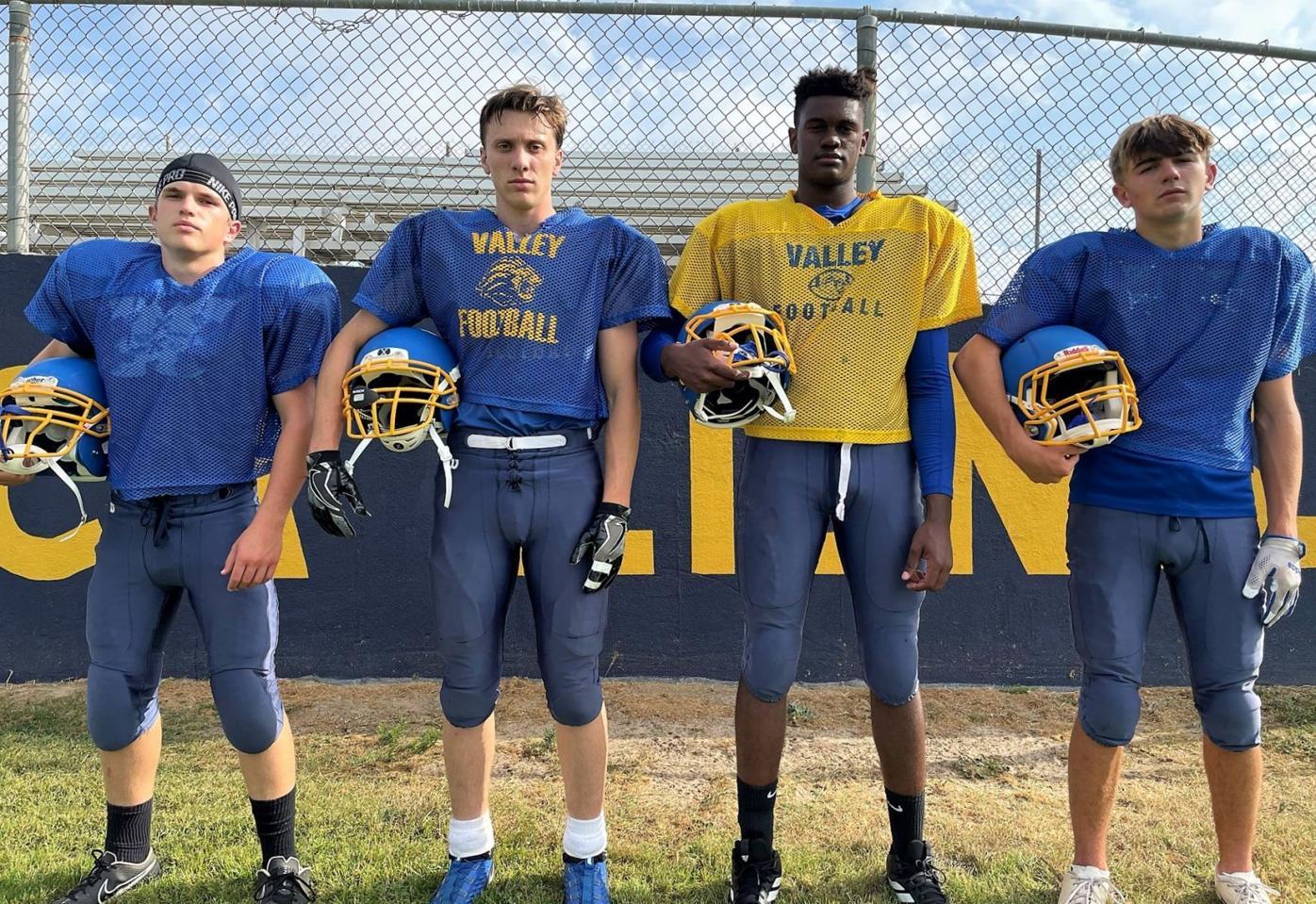 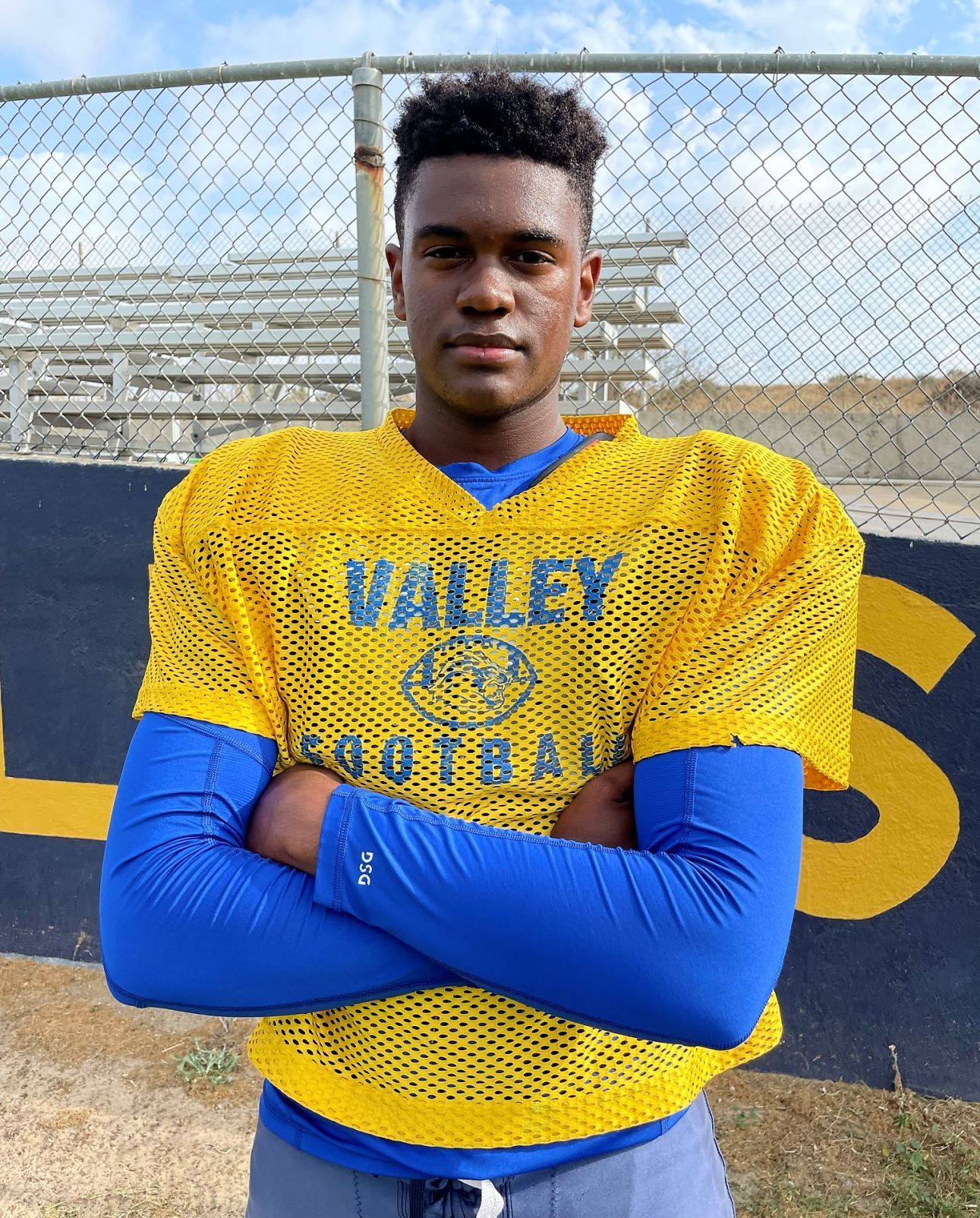 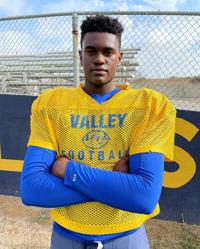 Sean Swain, a 6-foot-3 junior, is the Lions' starting quarterback this fall. He threw four touchdowns on Saturday. 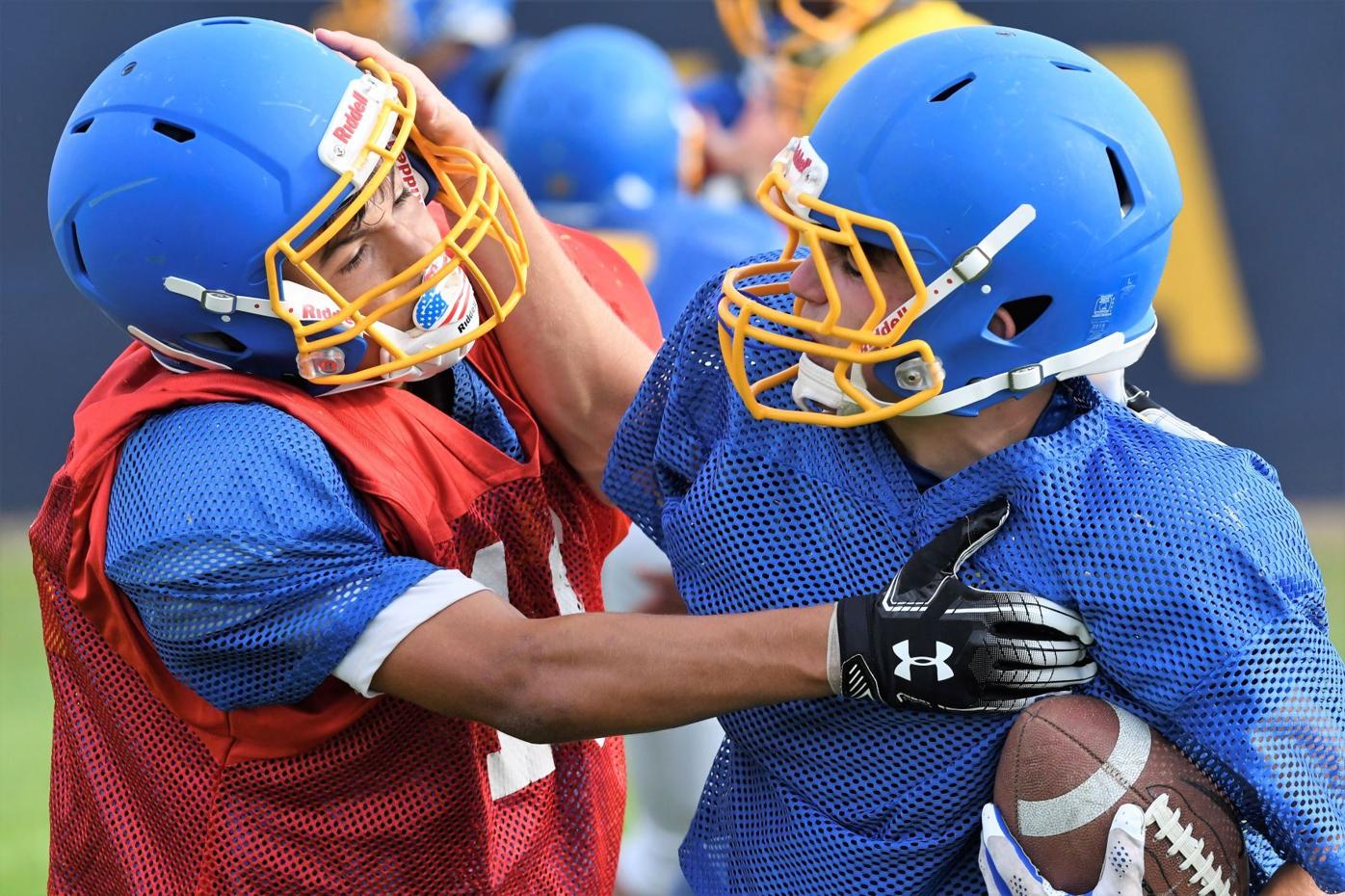 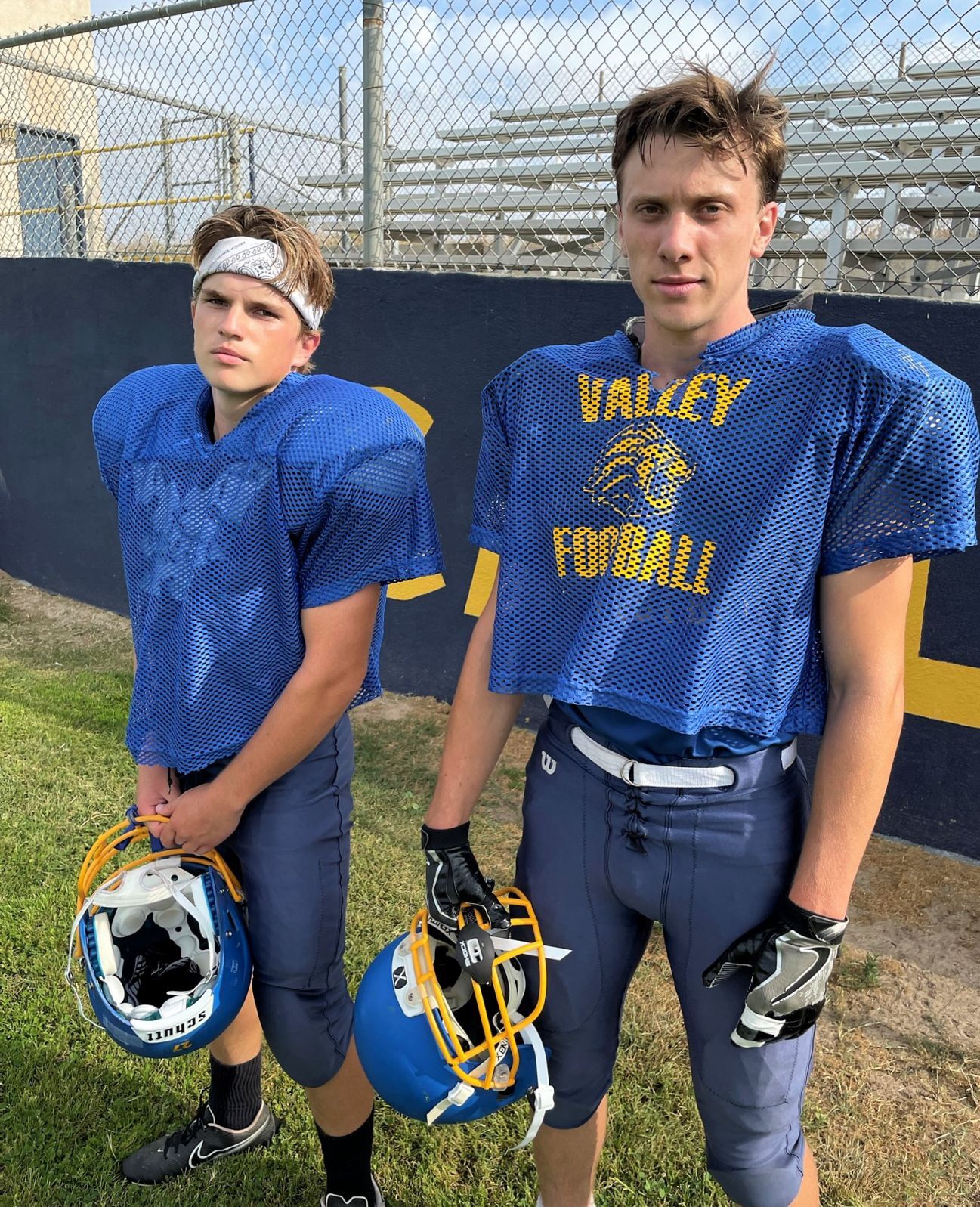 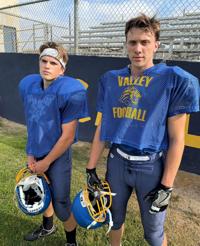 Jack Adam, left, and Josiah Heller will be opening up running lanes at offense, with Adam playing guard for VCA and Heller helming the fullback position. 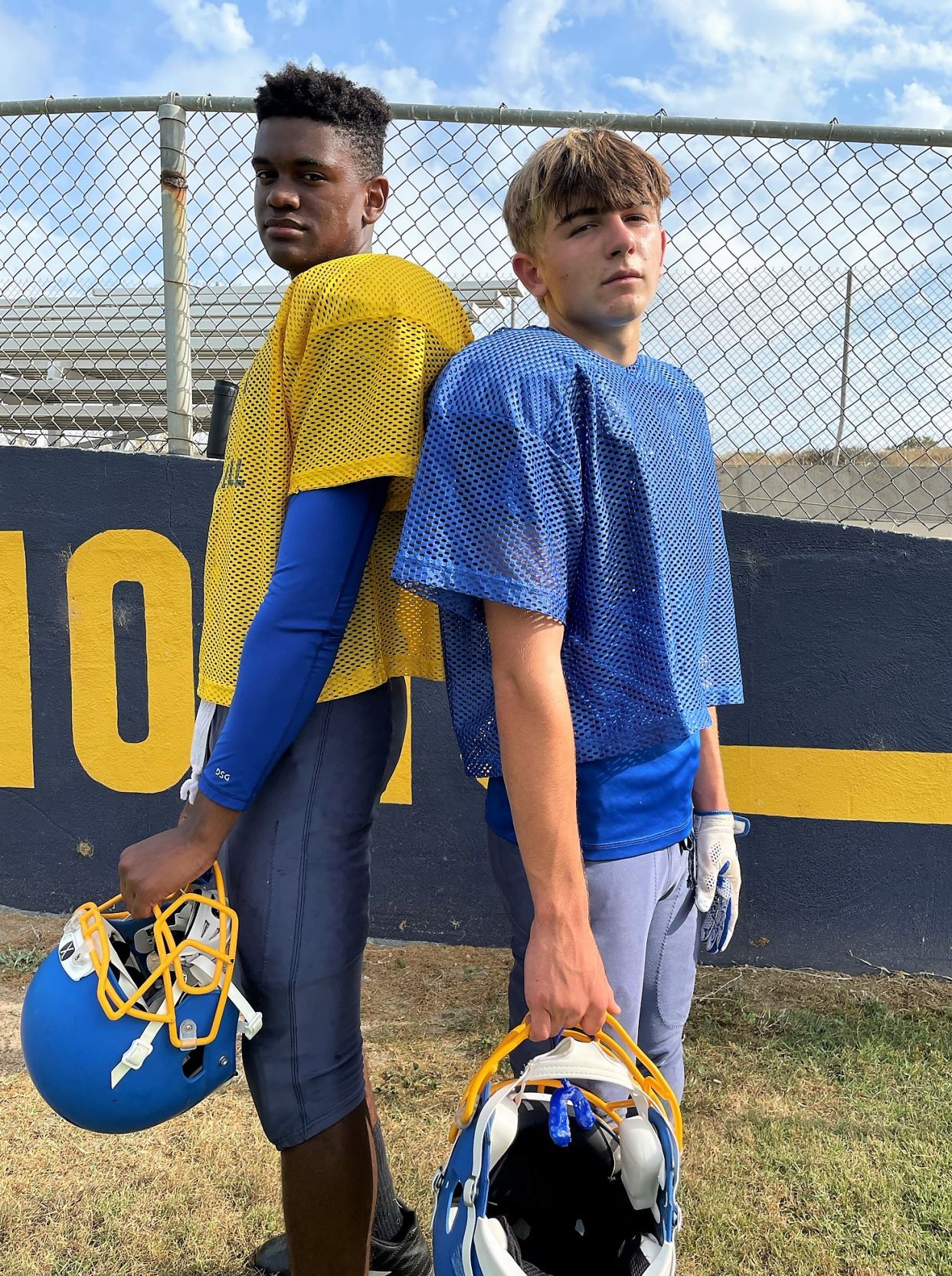 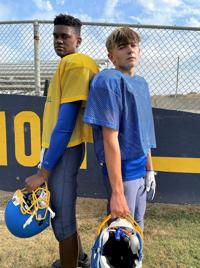 Sean Swain, left, and Jacob Sanders are two playmakers for the VCA football team. Swain plays quarterback and Sanders is a receiver/running back.

Sean Swain, a 6-foot-3 junior, is the Lions' starting quarterback this fall. He threw four touchdowns on Saturday.

Jack Adam, left, and Josiah Heller will be opening up running lanes at offense, with Adam playing guard for VCA and Heller helming the fullback position.

Sean Swain, left, and Jacob Sanders are two playmakers for the VCA football team. Swain plays quarterback and Sanders is a receiver/running back.

Valley Christian Academy did what it could to play three 8-man football games in the spring.

The Lions are hoping they'll have a full schedule this fall, though they're already dealing with COVID-19-related issues once again.

VCA was set to host Fresno Christian Friday night in its season opener, though athletic director Pete Fortier, who’s also the football coach, says that game is now off.

Fortier said the cancellation is due to COVID-19 issues.

Now the Lions will look toward the game against Frazier Mountain scheduled for next week. The Lions could play Frazier Mountain on Sept. 10, though that could change as well. As an 8-man program, the Lions are down on the pecking order when officials are assigned, meaning that game could be moved to either next Thursday or Saturday.

VCA went 2-2 in the spring, losing at Trona 56-14 before beating Hesperia University of Careers and Sports Academy 55-14. They beat Sun Valley North Valley Military Institute 22-0 and forfeited the game against Cuyama Valley.

The Lions bring back signal-caller Sean Swain, a 6-foot-3 junior who took some snaps in the spring before suffering an ankle injury.

Swain is a big kid, especially for 8-man competition.

"He's improved greatly over the last year," Fortier said of Swain, who is the younger brother of former VCA basketball standouts Simone and Sabrina Swain. "He's got the height, good speed and seems to enjoy the position. That's a big part."

Swain said he feels he'll be able to deliver the ball to his receivers and make the right play.

“I can switch the play if I see the defense lined up a certain way,” Swain added. When the situation calls for it, Swain added, he can "run when I'm in trouble."

"I feel pretty good about the team," Swain said. "We need some work on the line, but we'll get there."

Josiah Heller is the team's fullback, with the main goal of opening up running lanes for Swain and Jacob Sanders, who will play running back and receiver.

Jack Adam, another senior, is the leader on the offensive line at guard.

"I think we have a lot of talent and if we bring it all together this year should work out pretty good," said Heller, who also plays defensive end. "I'm looking forward to a good season. I'm thankful we're even getting to have one."

Heller stood out during the Lions' scrimmage against Coast Union last weekend, Fortier said. Coast Union figures to be the Coast Valley League frontrunner once again.

"There's a lot of pointers that we got from watching the film. I'm glad we got some film out of that," Heller said. "It's great to be able to get a third-person view of yourself."

Adam said the offensive line "definitely has a lot of potential" this year.

"As we keep working and progressing this season, I think we'll be really good," Adam said.

Adam said having skill guys like Sanders and Swain can make his job a bit easier.

"I have utter confidence in Jacob and Sean," Adam said. "I don't have a second thought about them when we're blocking. All my focus is on how to make the offensive line do well, but I don't have to worry about Sean or Jacob messing anything up."

Now a sophomore, Sanders is coming off a strong basketball season as the school's point guard and aims to carry that momentum into a productive football season. It appears he'll get plenty of touches in the Lions' offense.

"I really like offense," Sanders said. "Defense, I'm working on it. I'm getting better at tackling and hitting people harder. But I like just making plays with the ball."

In 8-man football, just about everybody plays both ways. The Lions had 16 players at practice on Tuesday, but Fortier said the team should have about 24 players when fully healthy.

Sanders said the offense impressed him in the scrimmage against Coast Union.

"We did a little bit better than I thought we were going to," he said. "Josiah is one of the best fullbacks VCA has ever had. He blocks like a champ and creates a hole even when there's not one."

Sanders feels Swain's deep ball will be a weapon he and the entire VCA offense will utilize this season, noting that Jordan Titus is going to be a key play-maker in the passing attack.

"Jordan had like five or six touchdowns in the scrimmage," Sanders said. "He's got good speed and he's about 6-2. Our center Josiah (Kerley) is good. We have fewer missed snaps than anybody else. The underclassmen, the freshmen, that's a solid class."

VOTE: Seven up for Player of the Week

The Lions will play at Coast Union in a Coast Valley League game in October.

They should also play Cuyama Valley in another league game. (The Lions forfeited a game with the Bears in the spring).

Coastal Christian appears to be fielding an 8-man team this spring after not having one in previous years. Maricopa is also slated to play this fall after not fielding any athletic teams last school year.