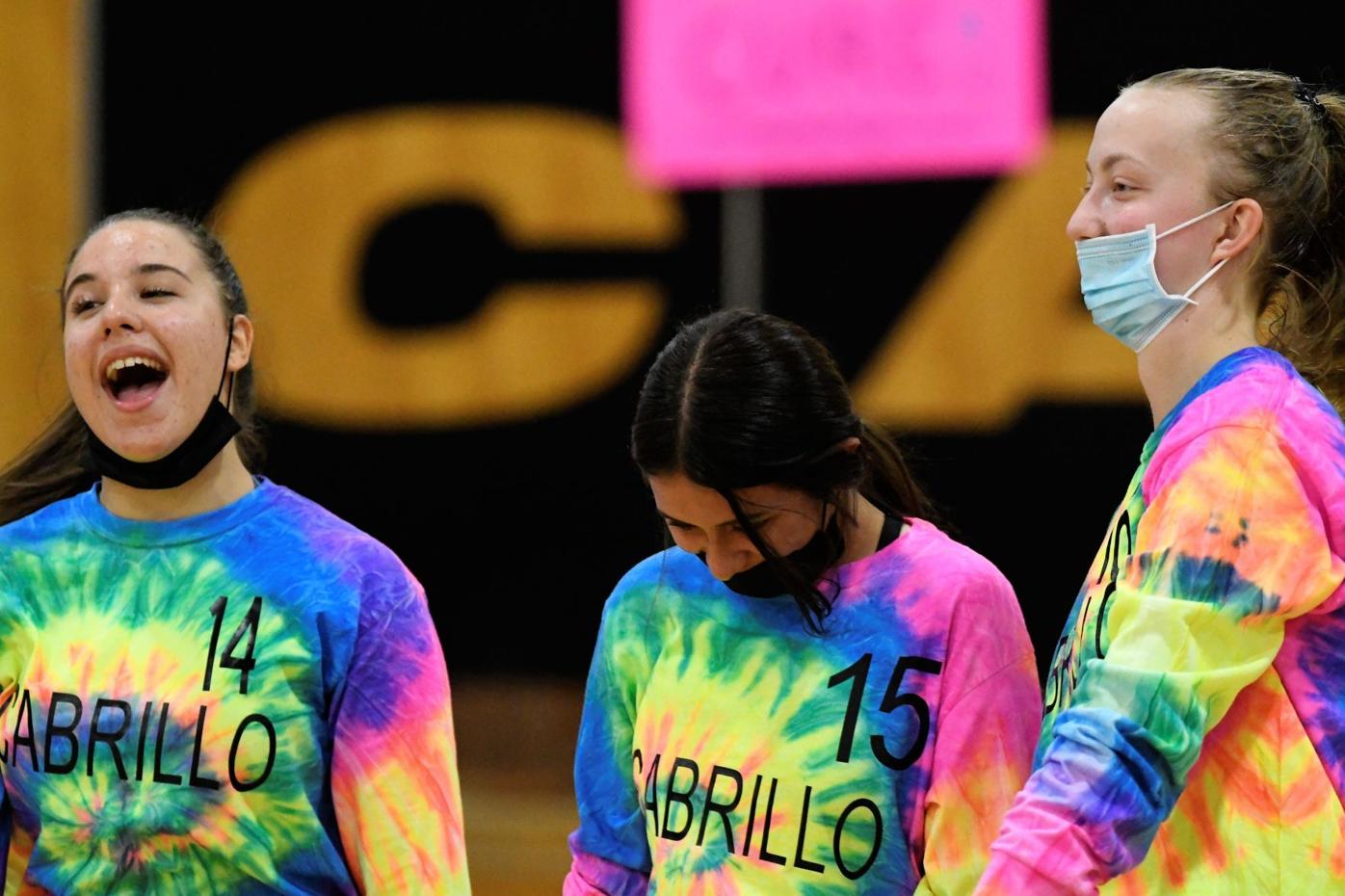 Cabrillo's Emma Fistarol (14) reacts as Heather Zent is introduced during a Channel League match against Lompoc. Fistarol and Zent both earned All-Channel League honors this fall. 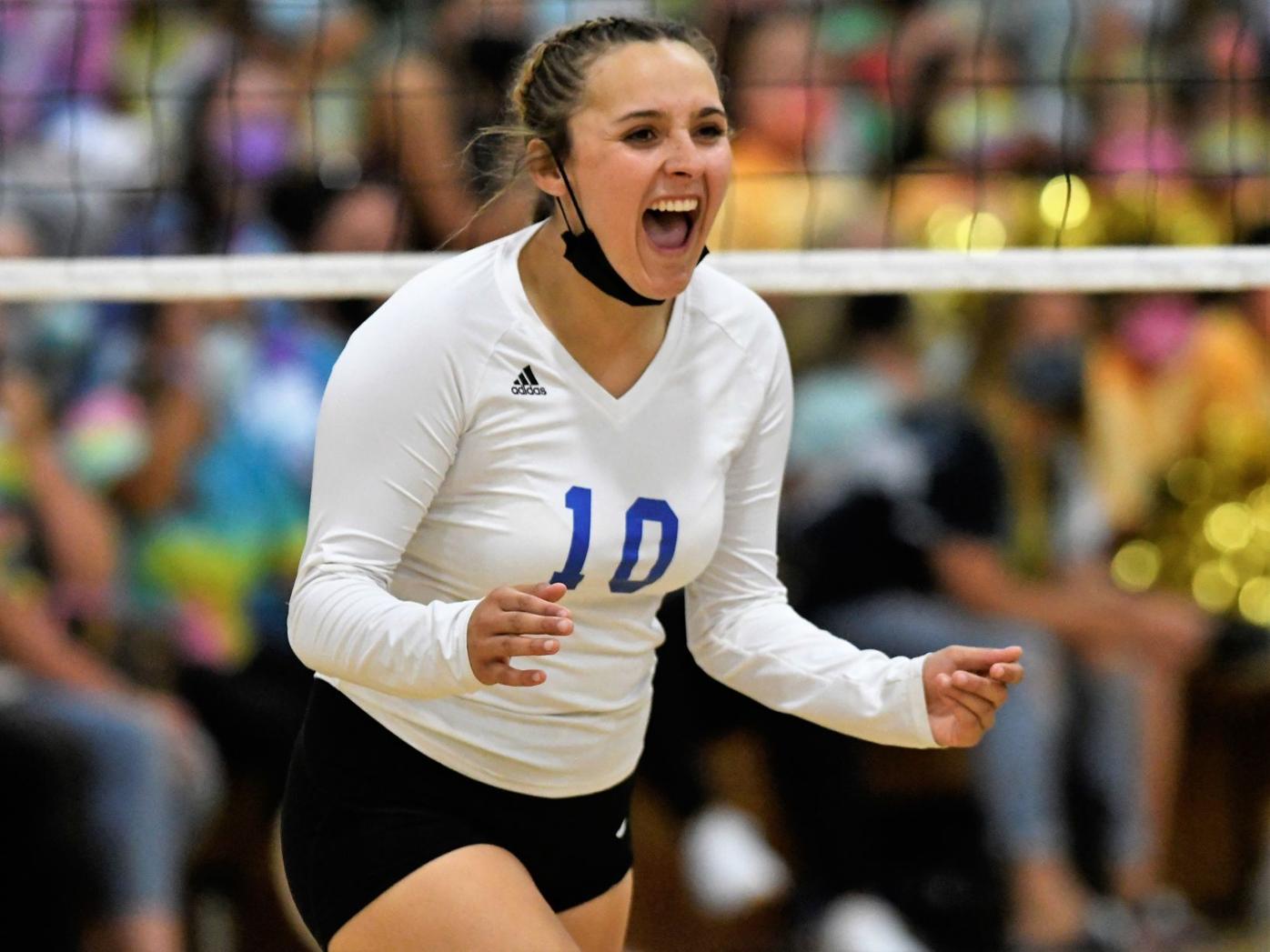 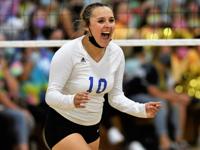 Lompoc's Cheyanne Cordova celebrates a point during a Channel League match against Lompoc. Cordova was named to the Channel League's Second Team.

Cabrillo's Emma Fistarol (14) reacts as Heather Zent is introduced during a Channel League match against Lompoc. Fistarol and Zent both earned All-Channel League honors this fall.

Lompoc's Cheyanne Cordova celebrates a point during a Channel League match against Lompoc. Cordova was named to the Channel League's Second Team.

One Cabrillo senior and a junior from Santa Ynez were named to the First Team All-Channel League in girls volleyball.

Cabrillo's Emma Fistarol, an outside hitter, was named to the First Team along with Santa Ynez middle Kaki Allen.

Dos Pueblos went 9-1 to take the Channel League title, with its only loss coming to Santa Barbara, which went 8-2 in league to finish in second place. Dos Pueblos was 26-6 overall and Santa Barbara went 20-5. San Marcos was third in the league at 7-3 and the Royals went 19-6 overall.

This is the final year the Channel League will be configured as such as Lompoc, Cabrillo and Santa Ynez are leaving the CIF Southern Section to the Central Section, joining the Central Coast Athletic Association schools in Santa Maria and San Luis Obispo County next school year.

Lompoc had one player on the All-Channel League Second Team in junior opposite hitter Cheyanne Codova. Cabrillo senior hitter Maiya McIntyre also earned Second Team honors, joined by Santa Ynez juniors Jayda Henrey and Gianna Pecile. Henrey is an opposite hitter and Pecile is an outside hitter.

Also on the Second Team are Makeila Cervantes from Dos Pueblos, Lily Blakenhorn and Ava Cole from San Marcos and Carolina Koceman and Campbell Brown from Santa Barbara.

Hancock College picked up one win and suffered one loss while competing at the Hinson's Tire Pros Winter Classic over the weekend.

The Bulldogs hold a 2-2 overall record and are set to make their home debut on Friday during the annual Home Motors Tournament.

Hancock lost to College of the Sequoias 70-63. The College of the Sequoias held a slim three-point lead at the intermission after a well-matched opening half. The Bulldogs overcame an eight-point deficit and took their first lead of the frame on a go-ahead shot from beyond the arc Shawn Kelly with 10 minutes remaining in regulation. Teams traded baskets through the next five minutes of play, but the Giants put the game out of reach after capitalizing on a string of AHC turnovers down the stretch.

Kelly led the Bulldogs on scoring with a season-high showing of 20 points while also taking on five rebounds, two assists, and two steals. Amari Stroud also finished in double figures after tacking on 14 points while Bryce Craver chipped in with nine points and eight assists.

Hancock then beat Gavilan 69-64 as the Bulldogs battled through a gritty second half to get back on track after the teams were tied at the half. Stroud led the way on day two with a 24-point, 16-rebound double-double performance. Obadiah Curtis and Noah Haaland also finished in double figures with 11 points and 10 points, respectively, while Kelly snagged 12 rebounds.

The Allan Hancock College men's soccer program ended the season with a 3-2 loss to Moorpark College at home on Friday evening.

Prior to the game, the Bulldogs honored their 2021 sophomore class which included Bryan Gomez, Eli Zuniga, Luis Torres, Josue Celio and Myles Baro.

The Raiders (9-12-1 | 3-7 WSC) took the lead early with a pair of goals in the opening 11 minutes of play before a header from Anthony Morales in the 18th minute got the Bulldogs (3-15-2 | 2-8 WSC) on the board. Luis Torres evened the score with a shot to the far post that curved over the Moorpark keeper in the 44th minute, but the Raiders got the final say after successfully converting a penalty kick in the 70th minute.

Morales and Montelongo led the offensive effort with four shots apiece, followed by three from Jesus Hinojosa and a pair of attempts by Torres. TJ Vinnedge was charged with the loss in the box after allowing three goals and collecting six saves through 90 minutes of action.