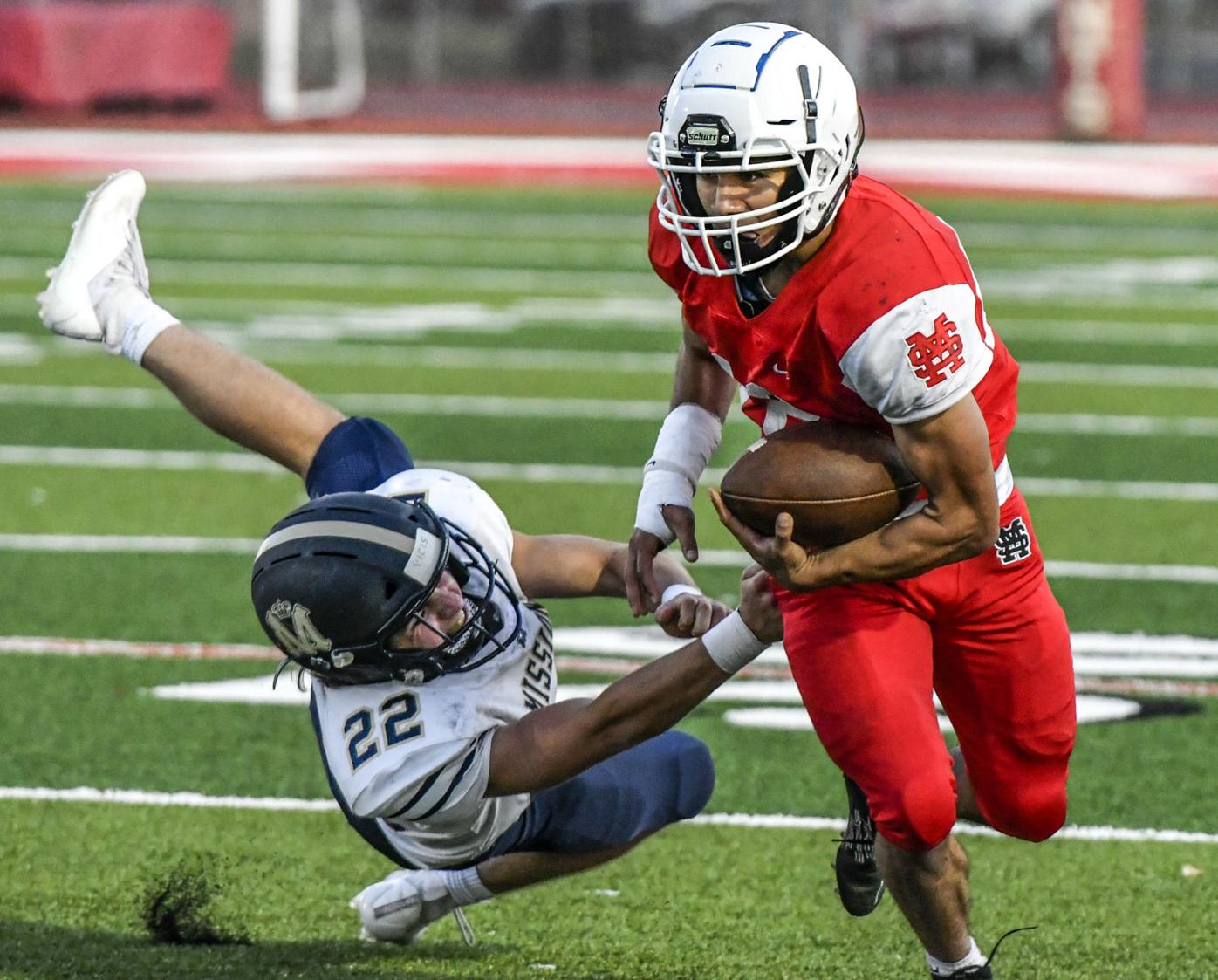 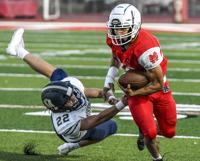 Santa Maria’s Samuel Herrera gets away from Mission Prep’s Caden Elmerick. Herrera had 108 yards rushing on 22 carries in the Saints' 16-7 win. 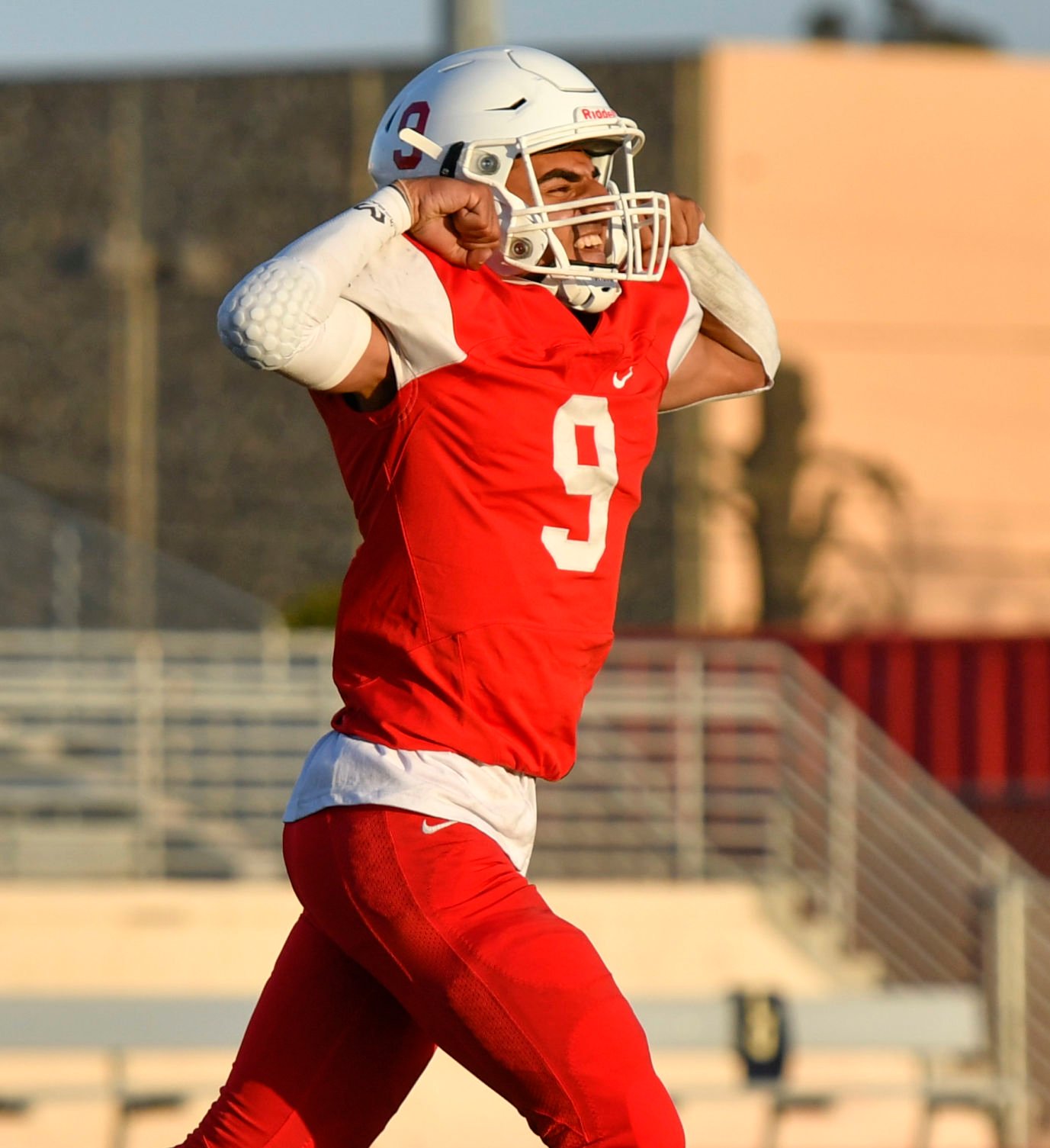 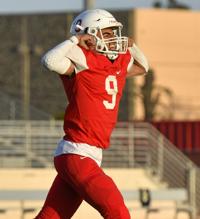 Santa Maria’s Murad Alamari celebrates after he scored on a goal line keeper against Mission Prep. 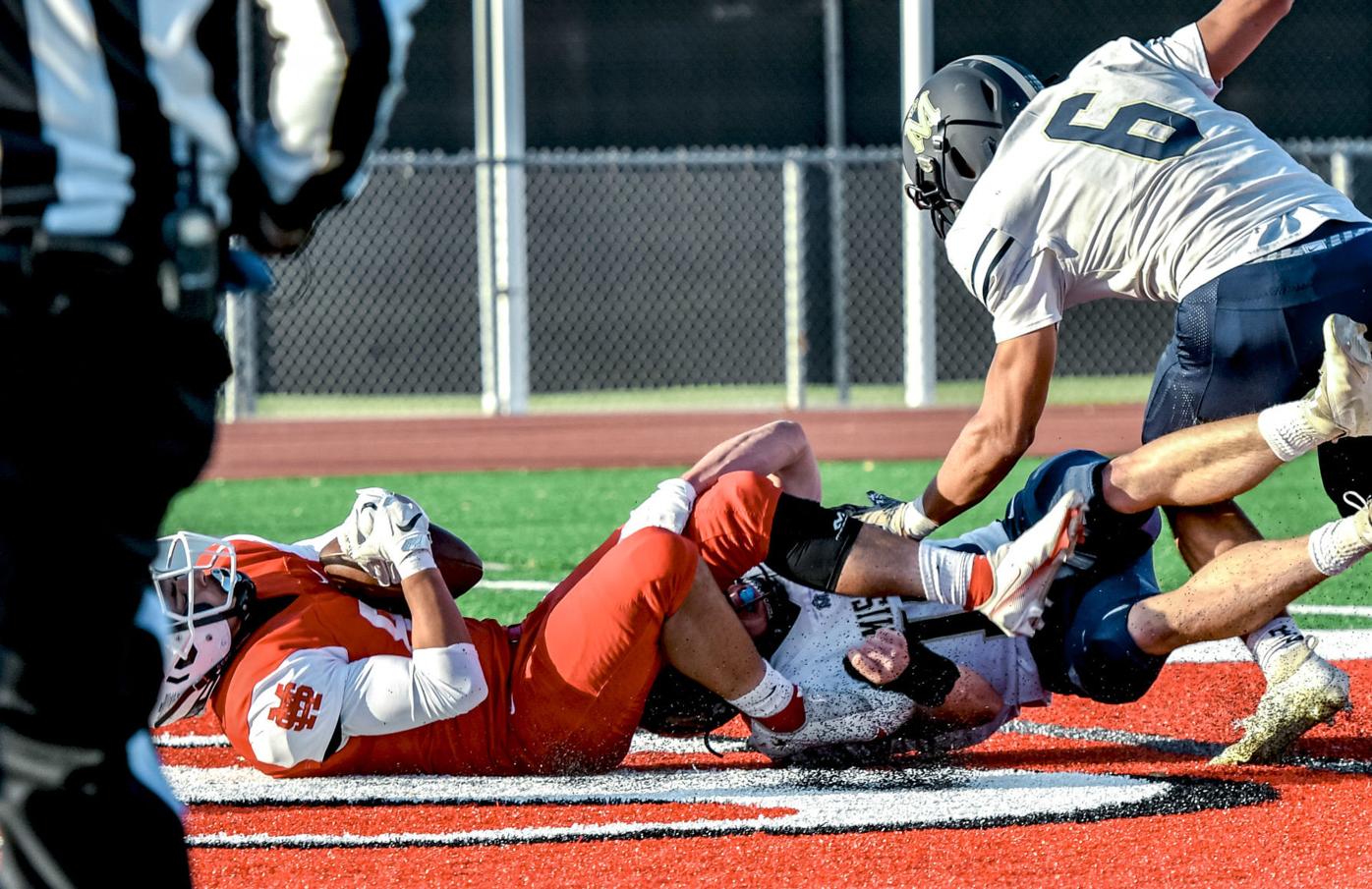 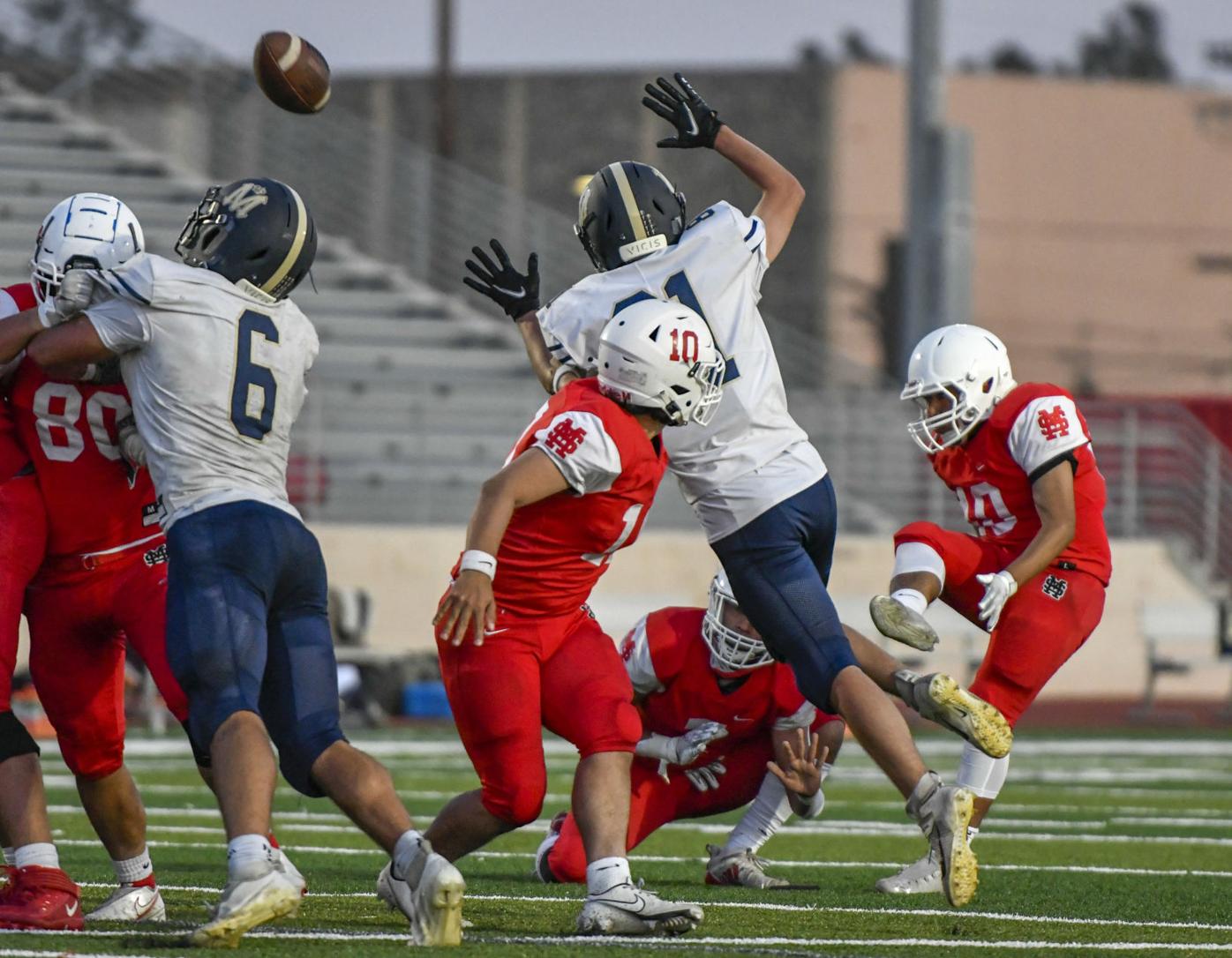 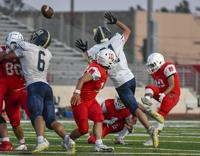 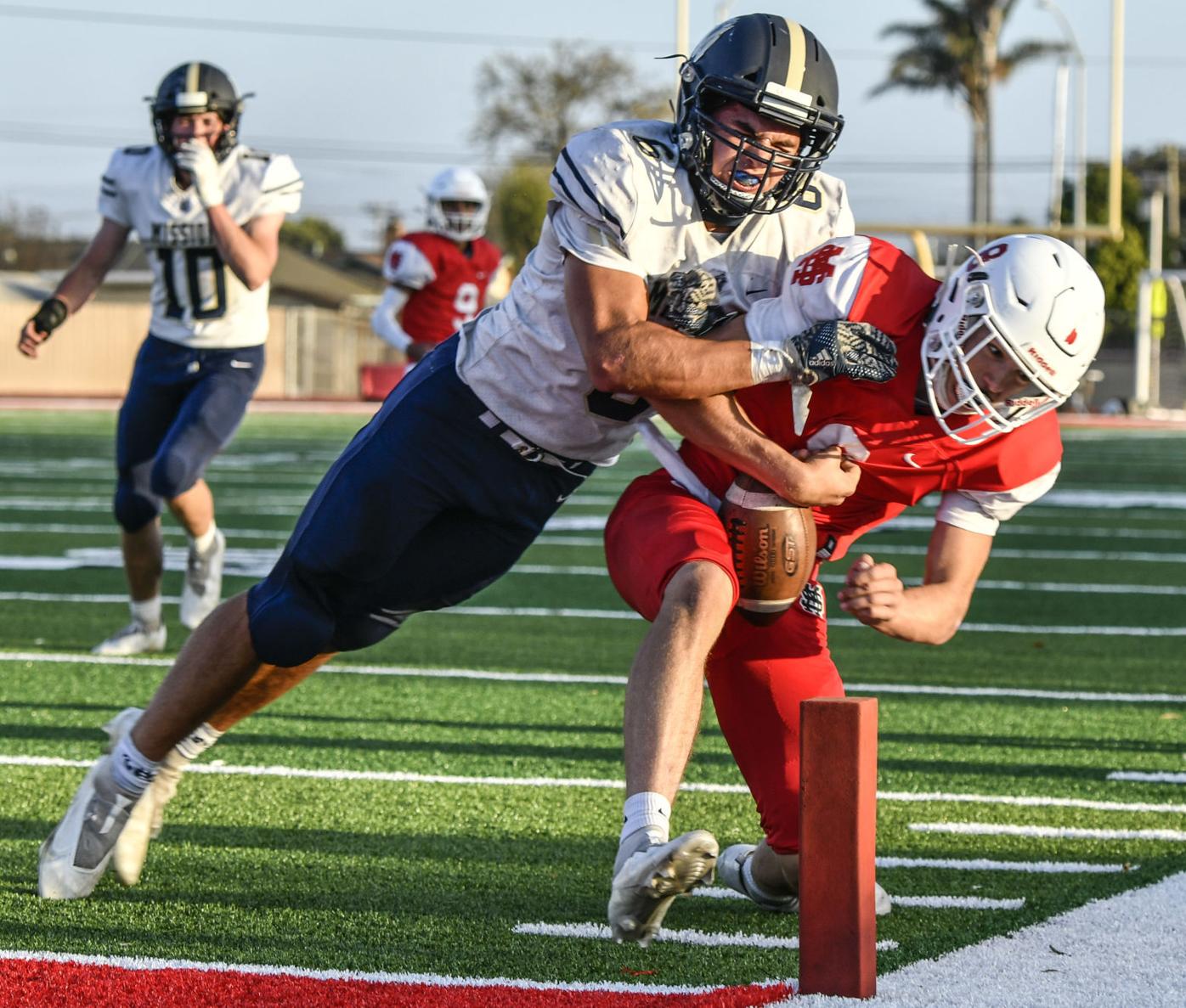 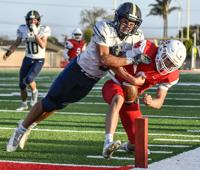 Santa Maria’s Nick Martinez gets knocked out of bounds just short of the end zone by Mission Prep’s Jack Susank during their game last week. Santa Maria hosts Pioneer Valley in a game on April 9.

Santa Maria’s Samuel Herrera gets away from Mission Prep’s Caden Elmerick. Herrera had 108 yards rushing on 22 carries in the Saints' 16-7 win.

Santa Maria’s Murad Alamari celebrates after he scored on a goal line keeper against Mission Prep.

Santa Maria’s Nick Martinez gets knocked out of bounds just short of the end zone by Mission Prep’s Jack Susank during their game last week. Santa Maria hosts Pioneer Valley in a game on April 9.

The Santa Maria defense held firm after a first-quarter Mission Prep touchdown, senior Santa Maria quarterback Murad Alamari threw for one score and ran for the winning one, and the Saints rallied to beat the Royals 16-7.

Softball: After starting season with win over Righetti, Saints to host Tigers

Nava recovered a Mission Prep fumble, and Alamari hit Jose Gonzalez on fourth down for a 15-yard touchdown pass and the Saints’ first score on the subsequent series.

Alamari rammed in from the Mission Prep 1 on a sneak with 21.6 seconds left in the first half. Santa Maria led 13-7 at intermission.

José Torres kicked a 27-yard field goal for the Saints at the 5:15 mark of the third quarter. That was it for the scoring.

On March 31, the Panthers finally got to play a game after having to quarantine because of a positive COVID-19 test.

The Royals, without regular quarterback Colby White who was injured, marched from their 19 to the Saints 15 on a series of running plays, with Jack Susank picking up most of the yardage, on the first series of the game. The drive ended when the Saints’ Manny Correa recovered a Royals fumble at the 15.

Susank went in from the 1 after a shanked punt set the Royals up at the Saints 27.

“Once we figured out they were running to the middle, we were able to stop the run,” said Nava.

“They didn’t have their (regular) quarterback, so we knew they couldn’t pass,” said Santa Maria coach Dan Ellington.

“Their offense is hard to emulate in practice. You don’t want it to take a touchdown to figure it out, but our guys figured out the little misdirection they were doing, and they handled it.”

The Santa Maria offense perked up for a time after star running back Sammy Herrera entered the game in the second quarter. He was playing for the first time this season. Herrera was out earlier because of a wrist injury.

He ran the ball once the first series he was in then his workload increased. Herrera finished with 108 yards on 22 carries.

“The wrist feels great. No pain,” he said.

Susank, with 120 yards on 18 carries, was the leading rusher.

Who will leave Saturday's game with momentum intact: Nipomo or Pioneer Valley?

Flavio Gonzalez recovered a Royals fumble at the Mission Prep 18 late in the fourth quarter. The Saints couldn’t capitalize but, with the Royals pinned at their own 2 with no passing attack and behind by two scores, the game was essentially over.

The game wasn’t exactly a penalty-fest, but fouls hurt both teams.

Penalties wiped out two Mission Prep scores and a Santa Maria touchdown. An offensive pass interference call negated a big Mission Prep gain on a halfback option pass with the Royals, still in contention in the fourth quarter, trying to rally.

The offenses were able to rally a combined total of just once after those big penalties. Susank eventually scored from a yard out after a penalty cancelled the first would-be touchdown earlier in the series.

The Saints were banged up during the game and Martinez, their top receiver, was on crutches with an ice pack on his lower right leg afterward.

“That’s been the story of our season, man,” said Ellington. “We can’t stay healthy.

“We’re a very good football team when we’re healthy. We haven’t been healthy, and we’re still 3-1.”