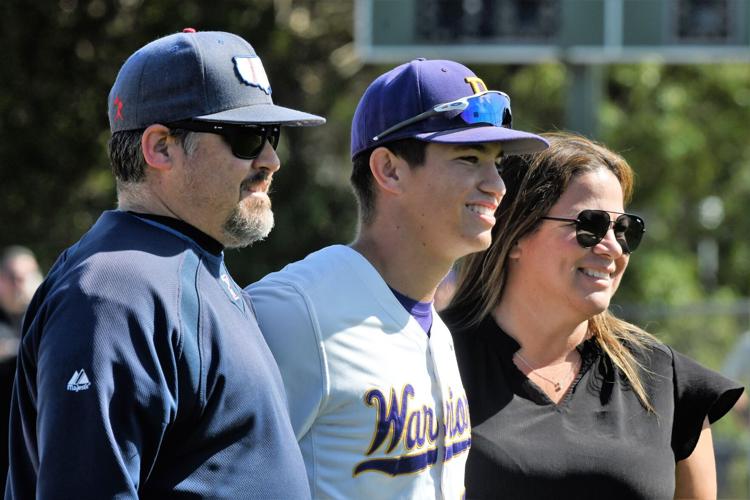 Righetti's Gavin Long poses for a photo with his parents ahead of Friday's Mountain League game against Paso Robles on Senior Day. Paso Robles rallied to beat Righetti 3-2 in the regular season finale. 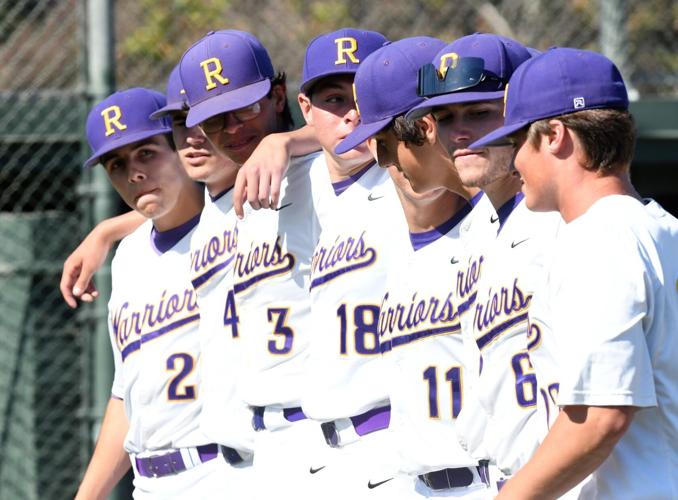 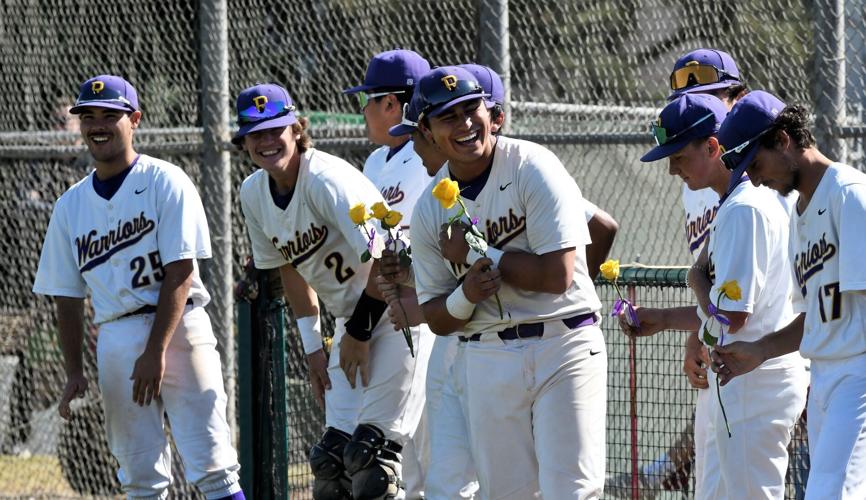 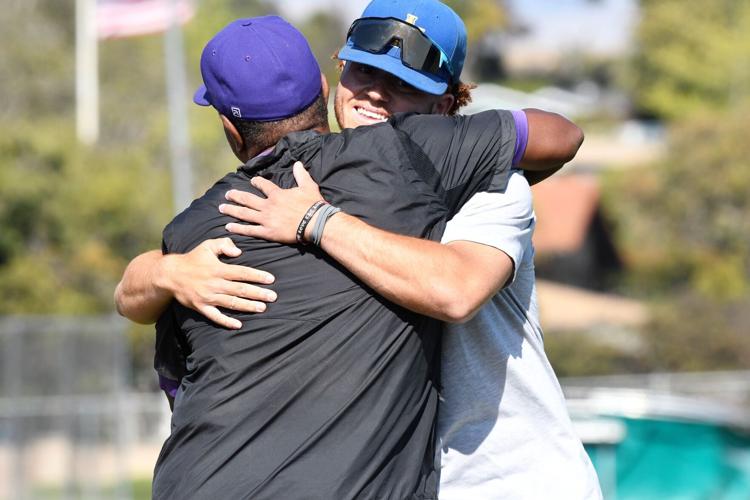 Righetti High grad Jake Steels hugs his father James Steels after throwing out the first pitch ahead of Friday's Mountain League game against Paso Robles on Senior Day. Steels never had a Senior Day at Righetti due to the pandemic in 2020. He has signed to play baseball at Cal Poly after playing for Hancock the past two seasons.

Righetti's Gavin Long poses for a photo with his parents ahead of Friday's Mountain League game against Paso Robles on Senior Day. Paso Robles rallied to beat Righetti 3-2 in the regular season finale.

Righetti High grad Jake Steels hugs his father James Steels after throwing out the first pitch ahead of Friday's Mountain League game against Paso Robles on Senior Day. Steels never had a Senior Day at Righetti due to the pandemic in 2020. He has signed to play baseball at Cal Poly after playing for Hancock the past two seasons.

It was nearly a perfect Senior Day at Righetti High School on Friday.

Though Paso Robles managed to ruin some of the fun, Righetti's baseball team was able to celebrate its stellar senior class in its final regular season game.

The Warriors honored eight seniors before taking on Paso Robles in the finale, then the Bearcats scored three times in the top of the seventh inning to steal a 3-2 Mountain League win.

Righetti had already clinched the Mountain League championship earlier in the week with a win over Paso Robles, though the Bearcats took two out of three games this week, including a 3-2 win in eight innings on Wednesday, after Righetti won the series opener 11-1 on Monday.

Righetti scored once in the bottom of the first inning after Bagby struck out the side in the top half of the first.

Bagby, a right-hander who's been dealing with a back injury, looked like he's nearly back to full strength. He went five innings and struck out five, overpowering the Bearcats with a hard fastball and forcing swing-and-misses with a sharp breaking ball.

Esparza and Omar Reynoso, a junior lefty, pitched in relief, allowing three hits and three runs, one of which was earned.

Neither team scored until the final inning after Ben Munoz drove in Adrian Santini with a sacrifice fly in the bottom of the first.

Paso Robles had a prime opportunity to score in the fifth after a walk and a single by Connor Neall. Righetti catcher Brodie Miller then threw out Neall who was trying to take second. Zane Cannaday then walked and Christian Rowley then hit a ground ball that turned into a 4-6-3 double play turned by Gavin Long to end the inning.

Righetti had a chance to score in the sixth when it got two runners on with one out, but a pop out and a strikeout ended the threat.

Kailer Utter and Kyle Bonham then started off the seventh with singles for the Bearcats and Reynoso came into pitch. The Warriors then committed an error on an Elliott Hawe bunt to load the bases with nobody out. Neall then singled to center field to bring in Utter and Bonham for a 2-1 lead.

Canady then hit a sacrifice fly that brought Neall home, but Schmid was able to get the runner tagging up to third to end the inning, though the run scored first.

Righetti made some noise in the bottom of the seventh after Jacob McMillan and Ryan Boivin both reached on Paso Robles errors. Schmid then bunted to move the runners up and Long was walked intentionally to load the bases with one out. Adrian Santini then hit a sacrifice fly to right to bring McMillan home and cut the deficit to 3-2. Miller then grounded out to short to end the game.

Righetti ends the regular season with a 23-5 record after going 13-5 in Mountain League play.

Righetti will likely be in the CIF Central Section Division 1 bracket when they are released on Saturday.

Arroyo Grande finished second in league at 11-7 and San Luis Obispo was third at 10-8, followed by St. Joseph in fourth at 9-9. Templeton went 8-10

Sophomore Caden Cuccia went 3-for-3 at the plate with a double and three runs while also throwing four innings in relief and striking out three as the Knights wrapped up regular season play with a 10-18 record. The Knights went 9-9 in Mountain League play.

AJ Simmons had a hit and an RBI and Niko Peinado drove in two runs and scored twice. Chris Miller went 2-for-3 with an RBI and a double.

Travis Royal had a hit and a walk. Peinado also struck out two in two innings of relief work, allowing just one hit.

Senior Vic Heredia smacked a pair of home runs from the lead off spot. He went 2-for-4 with two RBIs and two runs.

Hunt also helped his own cause at the plate, with a hit and a run.

Caleb Cassidy had two hits, a run and an RBI for the Pirates. Tanner Padfield also drove in a run.

The Pirates scored three times in the third to take a 3-0 lead, adding single runs in the fourth, fifth and sixth innings. The Spartans scored in the top of the seventh. Santa Ynez did not commit an error.

After a 19-0 pummeling on Wednesday, Righetti was much more competitive on Friday.

The Warriors led 1-0 until St. Joseph scored twice in the top of the fourth and added two more runs in the seventh.

St. Joseph had 11 hits and the Warriors finished with two.

CharliRay Escobedo went six innings in the circle for the Knights, striking out three. Mediano closed out the win with a perfect seventh.

Jordyne Sarellano threw a complete game for the Warriors, striking out three.

Paso Robles won the Mountain League championship with a 12-3 record after beating Atascadero 6-0 on Friday.

Arroyo Grande lost to Templeton to finish at 11-4 in league. Righetti went 5-10 in league play and 6-22 overall.