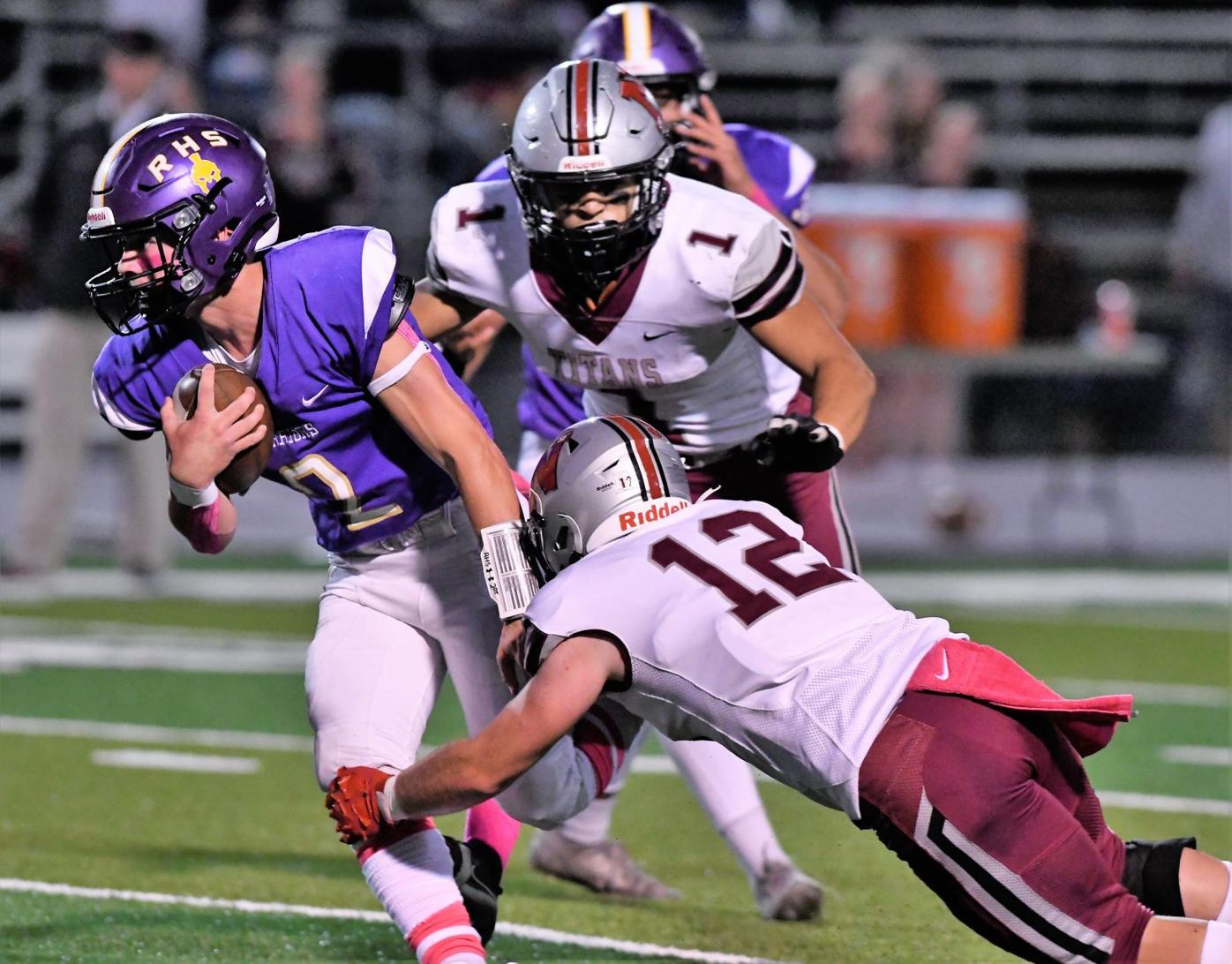 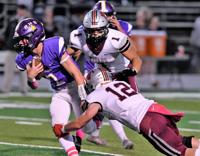 Righetti's Braden Claborn is wrapped up by Nipomo linebacker Cole Gilson during last week's Mountain League game. The Titans host Paso Robles in a league game Friday while the Warriors host Pioneer Valley in another. 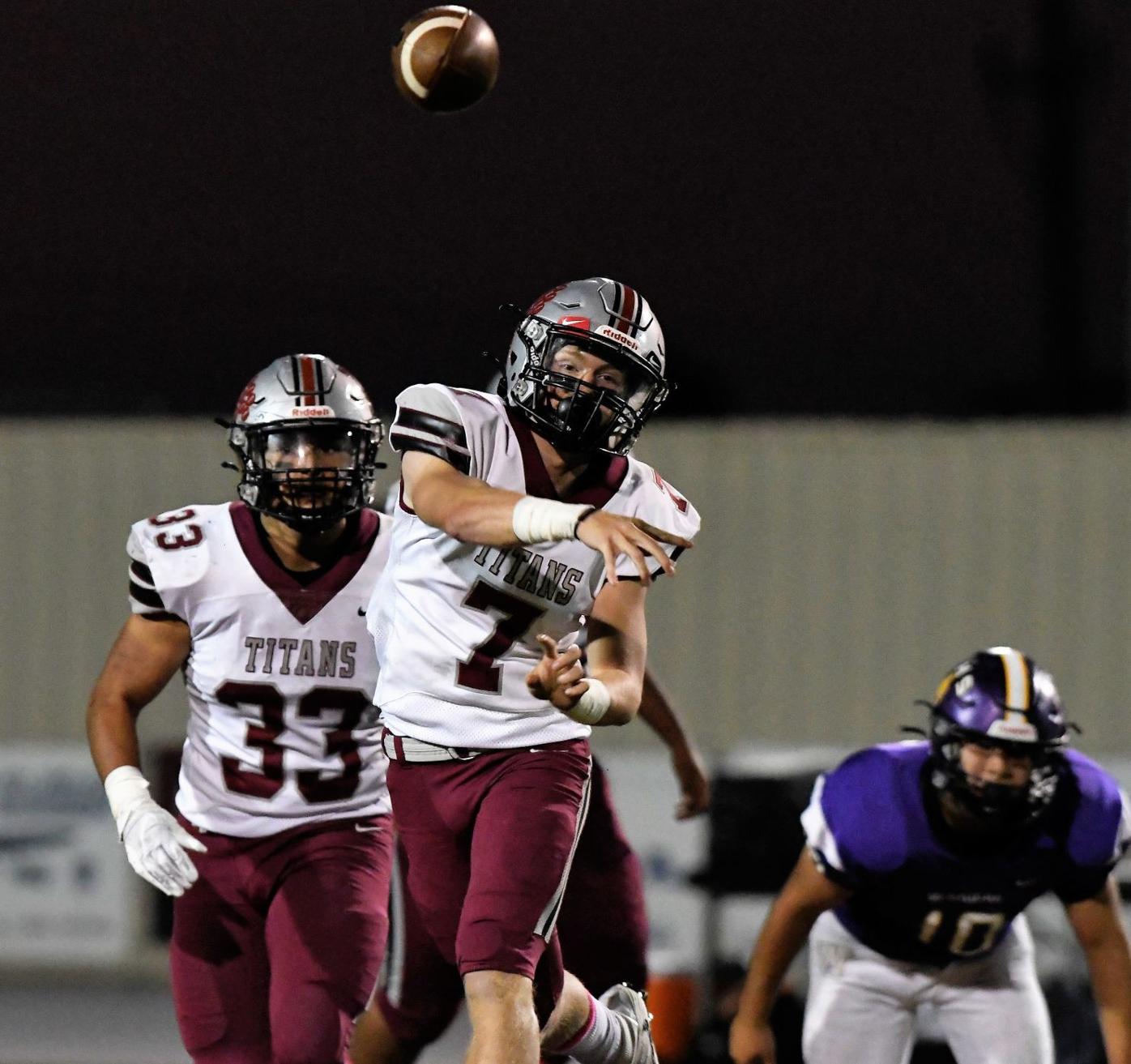 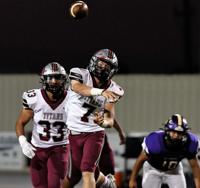 Righetti's Braden Claborn is wrapped up by Nipomo linebacker Cole Gilson during last week's Mountain League game. The Titans host Paso Robles in a league game Friday while the Warriors host Pioneer Valley in another.

As this football season has passed its midway point, the cream has risen to the top.

The best team in San Luis Obispo County? Well, that case is a bit more tightly contested, though Mission Prep appears to be the frontrunner.

Nipomo, with its 6-0 record, isn't too far behind and Arroyo Grande, riding a four-game win streak, is right there, too.

The top team in Northern Santa Barbara County is also clear: Santa Ynez, with its 6-1 record, holds that spot. The Santa Maria Valley is having a rough season, with the four 11-man teams going 4-17 this year.

Defense and special teams dominated the Cardinals' big showdown with St. Bonaventure last week as the Seraphs won the game after returning a blocked 52-yard field goal, attempted by Bishop's quarterback Michael Luckhurst, for a touchdown. The Cardinals had about 150 yards of offense and nearly won the game.

Star running back Delon Thompson was the lone offensive standout in the game, rushing for 218 yards and two touchdowns for the Seraphs.

Santa Barbara has been on a roll, reeling off five straight wins after a season-opening loss. The Dons will get a test against the Oxnard schools in Channel League play. If they get past Pacifica this week, the Rio Mesa showdown will be a HUGE game.

Abel Renteria is a good, young quarterback and there are plenty of skill pieces at SBHS.

The theme from Mission Prep this fall: consistency.

The Royals have just been plugging along, steadily beating everyone in their way. That continued with last week's win against Atascadero. Expect another mismatch Friday night in the Ocean League game at Santa Maria. Sharpie it: The Royals will enter the postseason with a 9-0 record and they'll be hoping for a good division placement once the playoffs start. Depending where they land, they'll  be eyeing a deep playoff run.

Nipomo hasn't been quite as impressive or steady as Mission Prep, though the results have been the same.

The Titans eked out another win last week, beating Righetti 21-13. Friday's game against a strong and improving Paso Robles team will be another test.

Three of Nipomo's wins have come by one score.

One of the hottest teams in the region is suddenly eyeing a Mountain League title. But the meat of the Eagles' schedule is coming up, with games remaining against St. Joseph, Righetti, Nipomo and Paso Robles.

Arroyo Grande has won four in a row and will face a St. Joseph team that has yet to find its stride.

Santa Ynez surely would've liked to play Cabrillo to start league play, but the game was scrapped due to a COVID-19 case within the Cabrillo program.

Now the Pirates start league play at a good Buena team that could give them trouble.

The Bearcats stunned St. Joseph last week, climbing out of a 14-7 deficit on the Knights' Homecoming to win 26-21.

Can they deliver another stun at Nipomo Friday? We'll find out.

After this writer made excuses for St. Joseph most of the season, there were no excuses for last Friday's loss to Paso Robles.

The Knights had their transfers eligible and had plenty of momentum heading into their Mountain League opener, but they just fell flat.

After a 5-0 spring that was utterly dominant, this season is shaping up to be a disappointment. There's still plenty of football to play, but games against Arroyo Grande, Nipomo, Pioneer Valley and Righetti will force the Knights to hurry up the process.

The offense has been inconsistent and the defensive secondary has been exploited. Will this team finally get it into gear?

Another Northern Santa Barbara County disappointment that looked good in the spring. The Braves have lost three in a row and have a monumental task at Rio Mesa in Oxnard this week.

The good news: Lompoc will be in the Central Section next season.

How is an 0-5 team in the top 10? Well, there aren't that many other worthy candidates for one. Also, the Warriors have played a crazy difficult schedule.

Righetti's opponents are 23-7 this year and they've lost their last two games by a combined 15 points to two 6-0 teams.

Righetti hasn't been good this year, but when you dig deep enough you see the Warriors are better than their record.