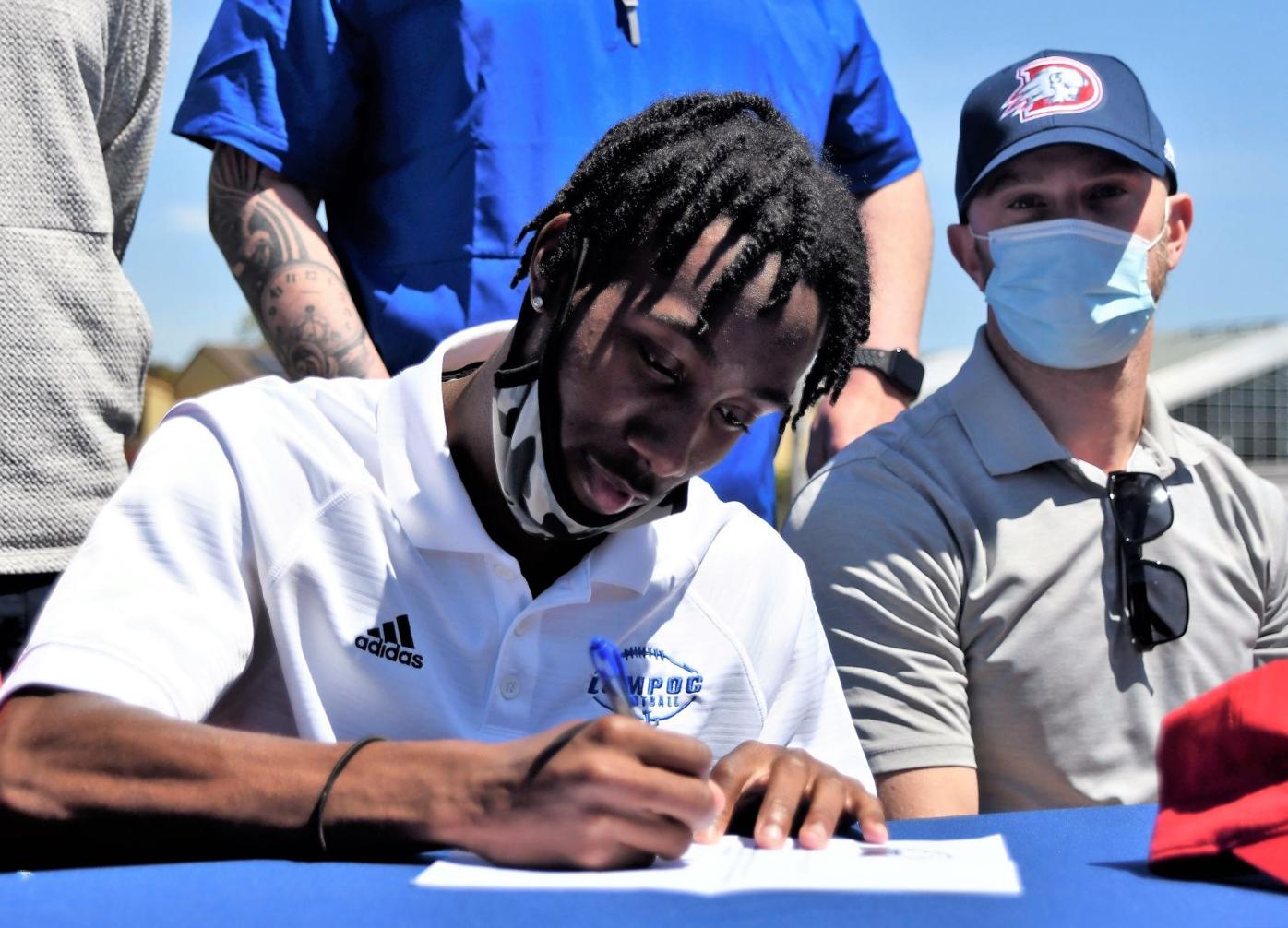 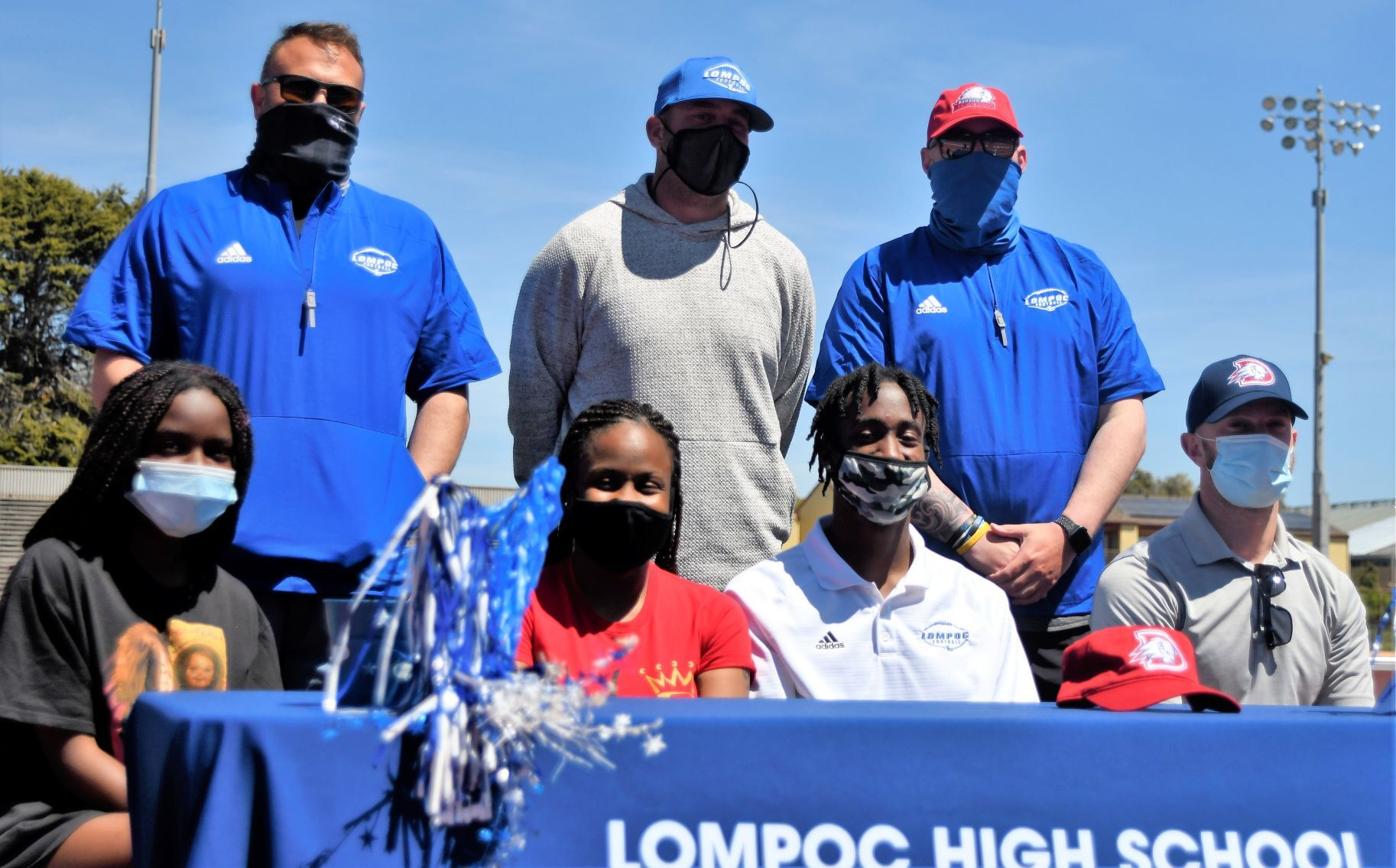 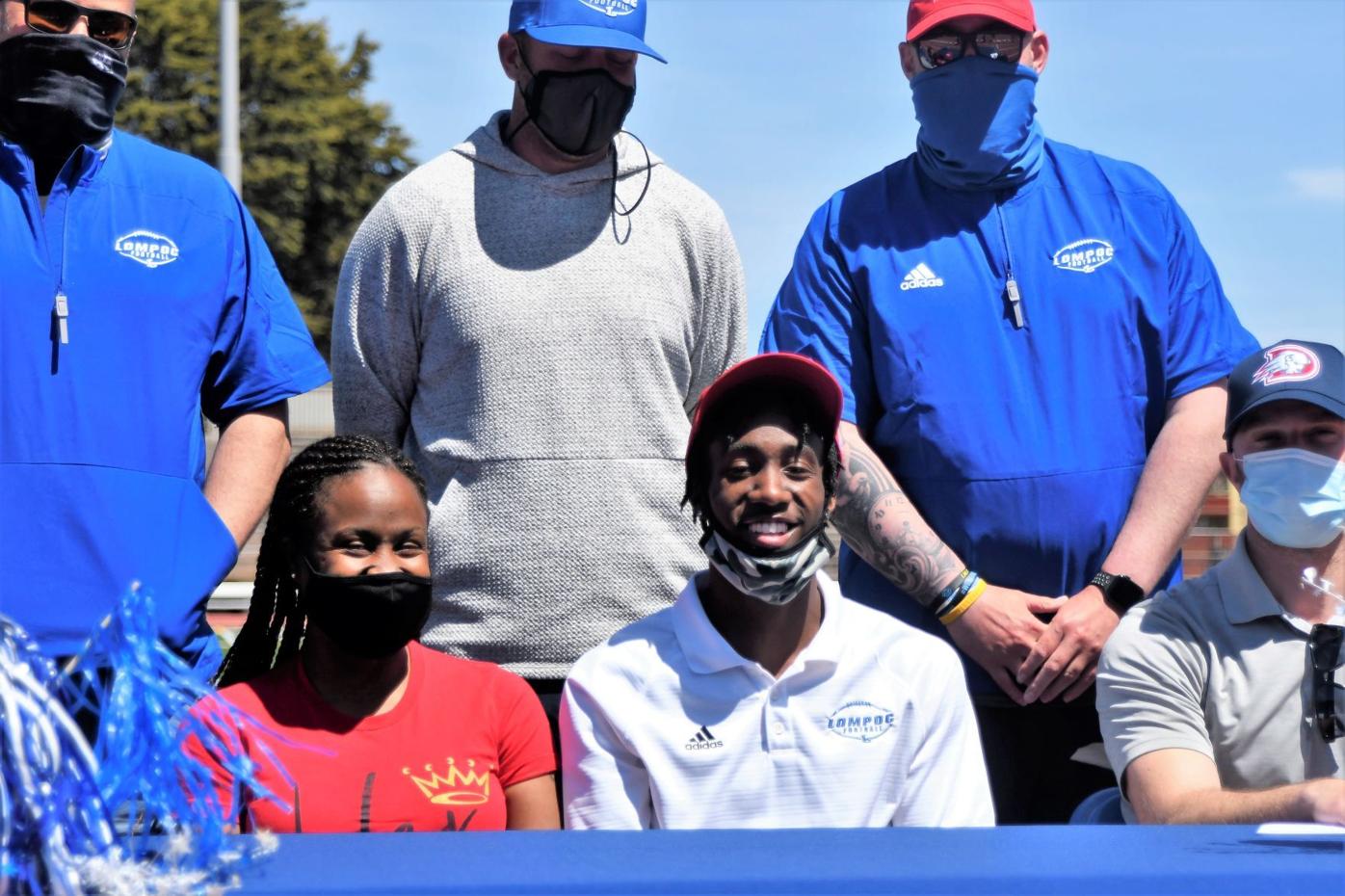 How athletic, talented and dedicated is Cailin Daniels?

It took him just three years to pick up the game up football and land with a Division I program.

On Thursday, Daniels signed to play football at Dixie State during a small ceremony at Huyck Stadium on the Lompoc High campus.

The senior receiver was a sophomore at Lompoc High when he first played football.

The culmination of that work and guidance was seen Thursday. As those three coaches, along with defensive coordinator Dustin Davis, were on hand to see Daniels sign with Dixie State, an FCS program in St. George, Utah.

"Cailin is a funny story," Jones said. "Tom Blanco, who's now retired, called me and said he had a guy in his P.E. class that was a heck of an athlete and I had to check him out. The first day I saw him, I said, 'OK, you're playing football.' From the first day he came out to practice, it was clear he was going to be on varsity. He had so much athleticism. You could see his ability early on at practice. The minute Harrison got here, them two clicked.

"Harrison and TJ are definitely responsible for how quickly he developed," Jones added of Daniels. "But Cai gets all the credit. He's an exceptional worker. If I had 40 kids on the team like Cailin, I wouldn't have any issues. You wish all your student-athletes were like him. He's such a great kid."

Also attending Thursday's ceremony were Daniels' mom Chrishawn and sister Hayden. Chrishawn, who's in the Navy, made the trip to Lompoc from San Diego to see Daniels sign with the Trailblazers.

"I'm very appreciative to have them here. It's a blessing," Daniels said. "She doesn't live in Lompoc, so it's a great honor to see her here."

"Cailin's dedication to anything he does is out of this world," Chrishawn said. "I'm really, really proud of him. I'm so happy his dreams are coming true."

Daniels is a 5-foot-10, 150-pound receiver who caught 44 passes for 819 yards and seven touchdown over 14 varsity games the last two years. He caught seven touchdown passes in that span. Daniels' build puts him in the slot, but he has enough speed and athleticism to also play outside.

"In terms of athleticism and route running, Cai is top tier among guys that I've coached," Keller said. "He's super talented and has shown a lot of growth in the three years he's played football. He's put the work in and has done an amazing job. He's a match-up nightmare."

Keller said finding an athlete and helping them get to the next level is one of the program's major priorities, even for football players at other schools. The staff had been confident Daniels has the ability to play at the next level and Dixie State was the school to give the talented receiver the chance.

"That's why we do it," Keller said. "We push these guys out and try to get them the opportunity to continue to play. This staff does a great job of pushing film for all the kids in the area. We're trying to do the best we can to get kids to the next level and it's a great feeling when it comes to fruition."

Dixie State went 2-3 in the FCS spring season. The Trailblazers are an independent program and will start their season with three games against Big Sky Conference teams this fall, starting with a Sept. 4 contest against San Sacramento State, before playing Weber State and UC Davis.

"It's been a blessing to play at Lompoc," Daniels said. "The coaches — coach TJ, coach K — helped me work on my craft. Coach Jones has given me an opportunity. (Quarterback) Cavin (Ross) throwing me the ball. I appreciate them all."