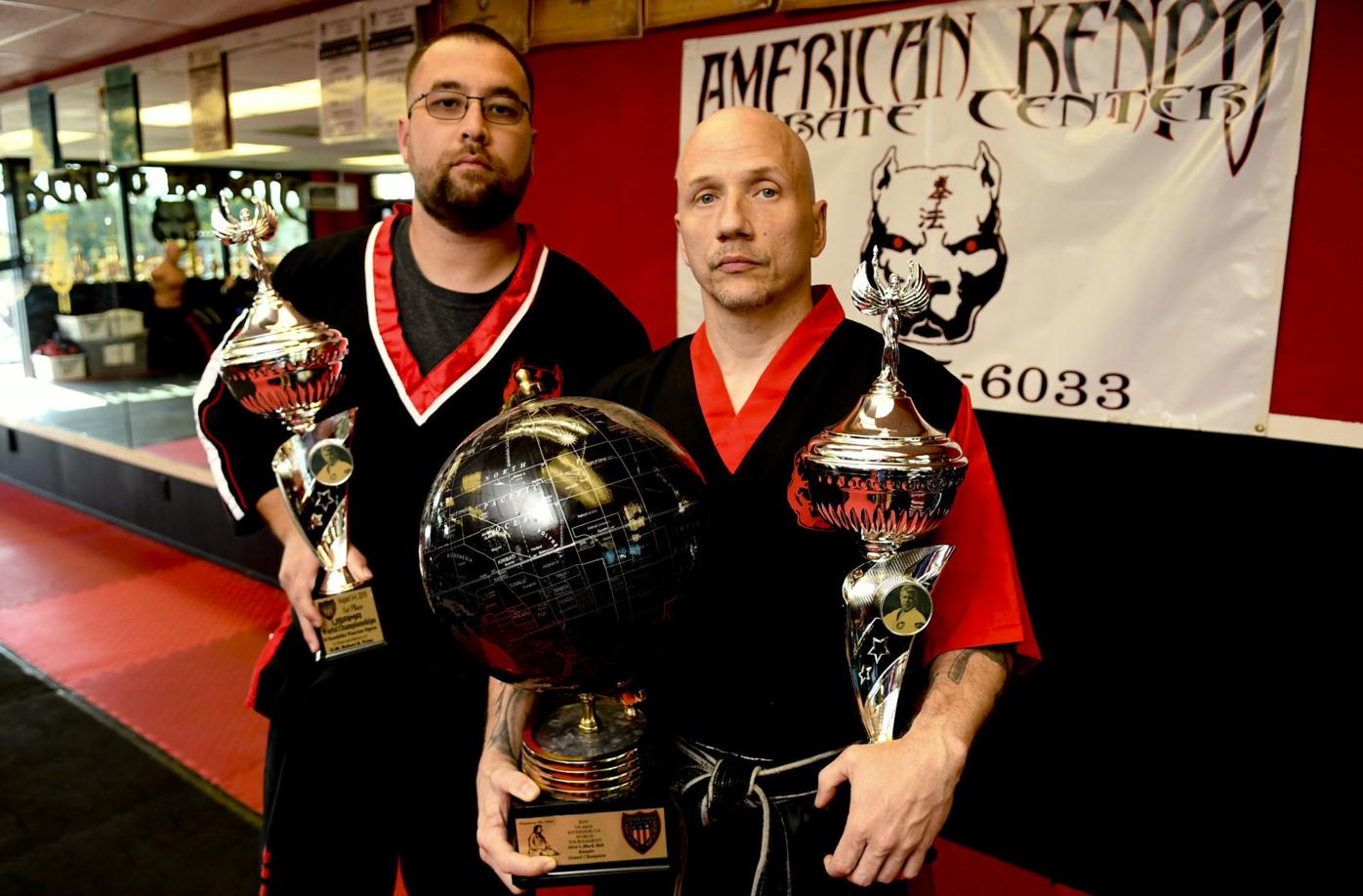 Brad Gray, left, and James Parson, both of the American Kenpo Karate Center in Lompoc, won world titles at an Aug. 4 tournament in Riverside. 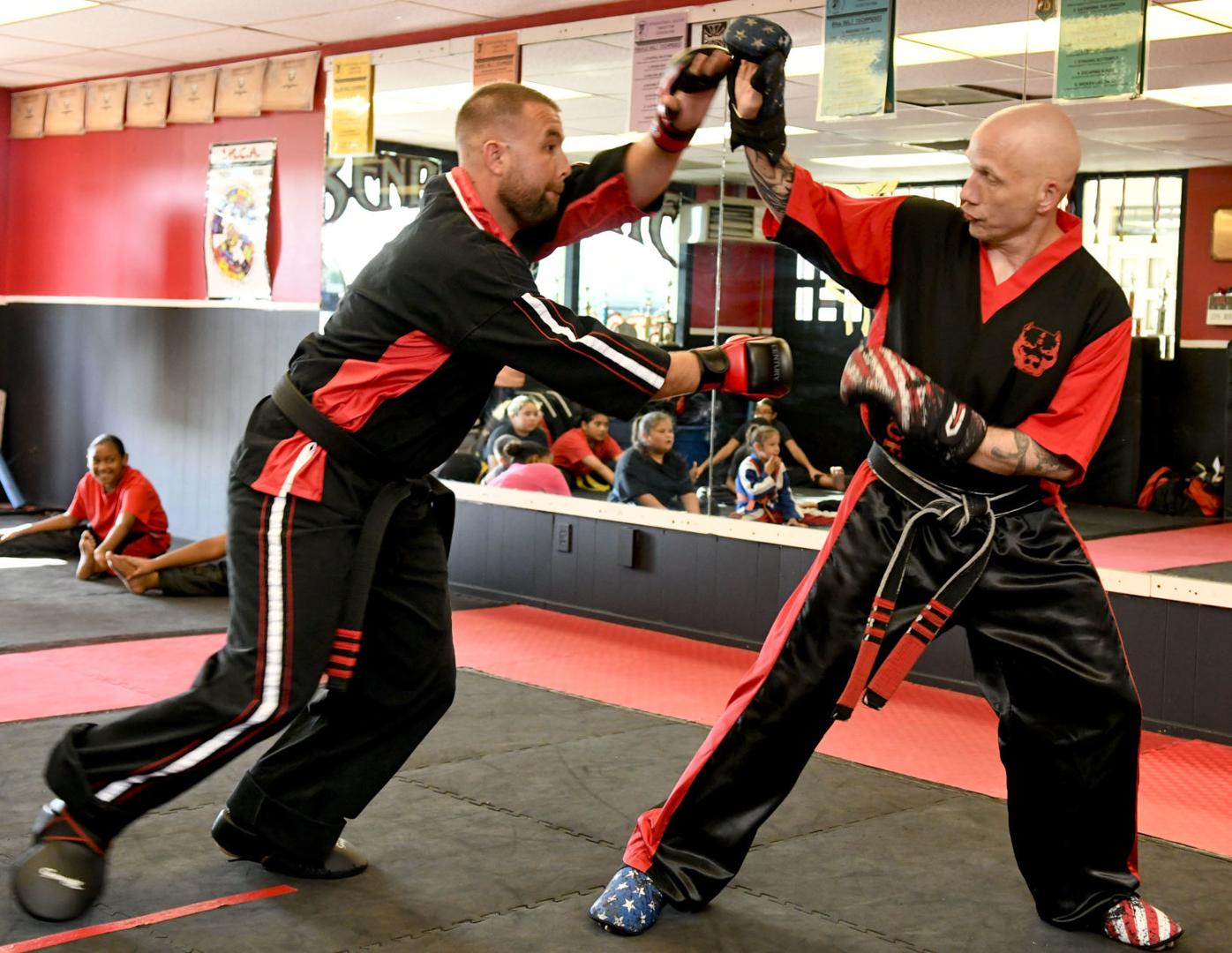 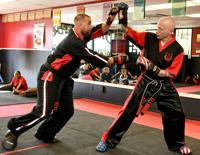 Brad Gray, left, and James Parson spar at the American Kenpo Karate Center in Lompoc. Both won world titles at an Aug. 4 tournament in Riverside.

Brad Gray, left, and James Parson, both of the American Kenpo Karate Center in Lompoc, won world titles at an Aug. 4 tournament in Riverside.

Brad Gray, left, and James Parson spar at the American Kenpo Karate Center in Lompoc. Both won world titles at an Aug. 4 tournament in Riverside.

Two black belts in karate who train in Lompoc walked away with huge honors down in Riverside earlier this month.

Brad Gray, a fourth-degree black belt, and James Parson, eighth-degree, took part in the United States Association of Martial Artists (USAMA) World Championships held in the Inland Empire – and came out of the tournament winning the adult male division and winning the master’s “fifth degree and above” division, respectively, at the Riverside Convention Center.

Both men train at the American Kenpo Karate Center located on North H Street in Lompoc. Parson, who trains Gray at the facility, says the tournament brought out several competitors from not only the nation, but the world.

Huyck Stadium better get ready, because it's going to be a busy weekend.

“The competition was very competitive with several countries represented. There were also schools from New Mexico, Colorado and Indiana present,” said Parson, who defeated three previous world champions to win his title.

Gray, who has trained with Parson for 12 years, went against international competition as well before winning the men’s black belt heavyweight spartan division.

And both men’s approaches at the tournament wasn’t a complicated one, Parson says.

“The game plan was very simple: 'be first.' No hesitation and we trained a lot of cardio prior, so the gas tank doesn’t become an issue,” Parson said.

Beforehand, both men worked on their conditioning to prepare.

Football, California's most popular sport, sees participation fall for fourth year in a row. How is the Central Coast affected?

“The biggest challenge, I would say, was preparing for it,” Gray said. “We were running in here on our days off before and after class just working on getting ready for the competition, and making things really clean,” Gray said.

Both men engaged in traditional one-on-one karate combat inside the venue against their opponents – utilizing blocks and kicks to gain the upper hand and score points.

With 19 players suited up, the Conquistadores held their own against Laguna Hills and decisively out-played host Santa Maria, which was without star running back Sammy Herrera.

Now, the two Lompoc men added to their trophy collection that’s adorned on the right side of the Kenpo building as students and spectators walk into the upstairs room located on 1000 block of H Street in Lompoc.

Parson and Gray say competitors can enter the tournament without an invitation. They can sign up online through the USAMA website.

Following the tournament, both men said they celebrated their championship by feasting on pancakes the following morning – without worrying about their carb intake.

Parson has trained in martial arts since 1991, rising to eighth-degree black belt. Gray says his trainer is strong at developing champion students in Lompoc.

“The nice thing about James and his teaching and talent is that he’s had a couple of students competing at a high level and winning championships," Gray said. "But they were winning national titles and international titles. You could say he has some pretty good students.

"But he’s had multiple students from kids all the way to adults who, wherever they go, they win,” Gray added. “You always get what you put into it and it speaks volumes about James’ teaching and leadership that he’s able to produce champions since he’s started this school.”

The American Kenpo Karate facility teaches various fighting styles like martial arts, Brazilian Jiu Jitsu and kickboxing. Classes are offered for both the youth and adults.