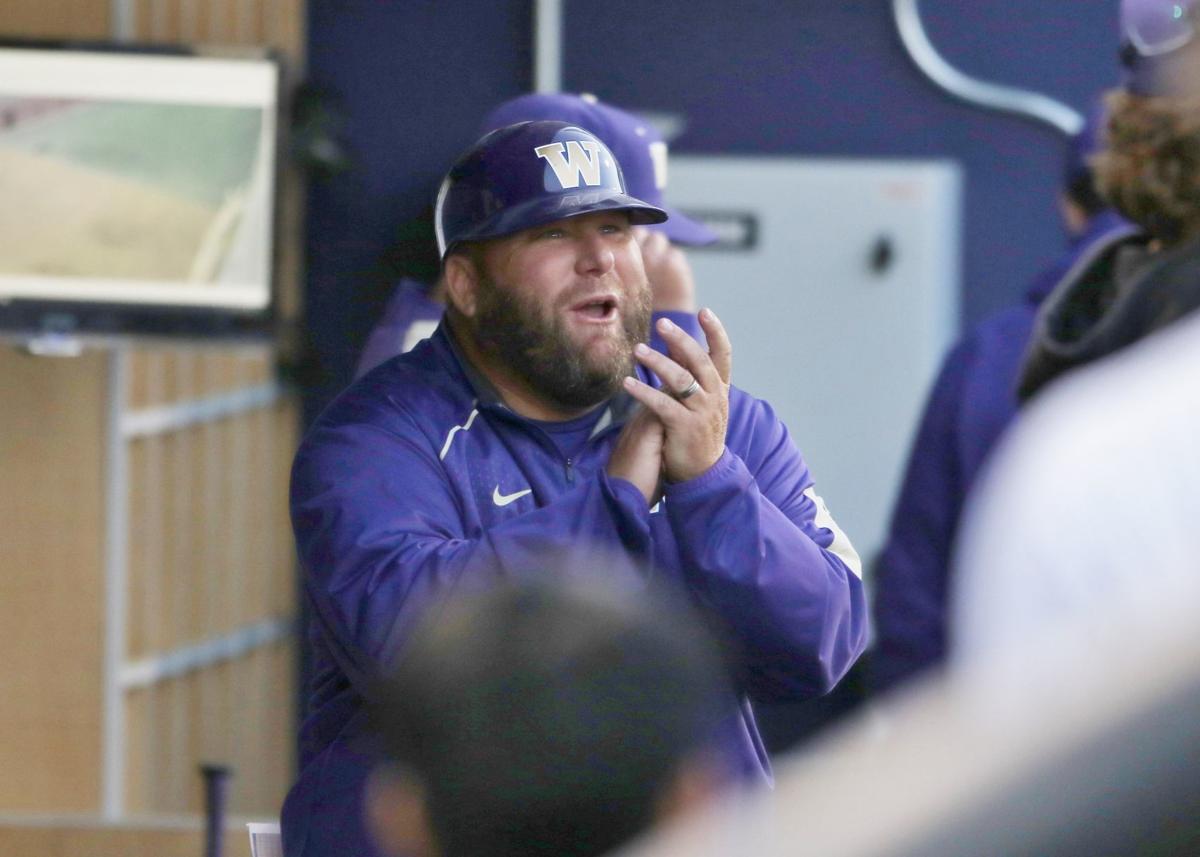 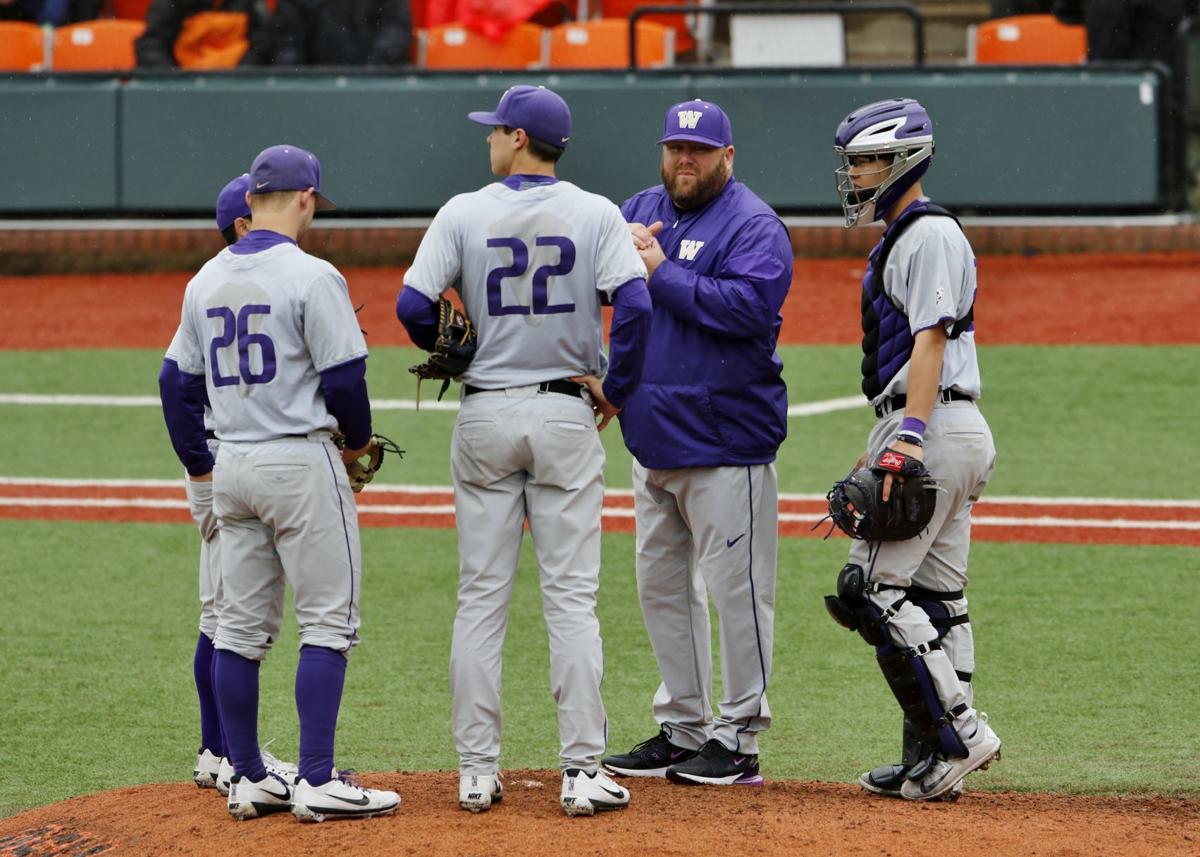 Washington associate head coach Jason Kelly, second from right, visits the mound during a game against Oregon State in 2018. Last year, Kelly was named the D1baseball.com Assistant Coach of the Year. Last week, Kelly, a St. Joseph High grad, made the move from Washington to Arizona State.

Kelly, a respected pitching coach who graduated from St. Joseph High School in 1998, has taken the assistant head coach position at Arizona State.

Kelly had been at the University of Washington since 2012. With the Huskies, Kelly was promoted to associate head coach, pitching coach and recruiting coordinator. He was named the D1baseball.com Assistant Coach of the Year in 2018 while at Washington.

"It's a great opportunity for my family and I and a place where we feel like we've got a chance to go to the College World Series every single year," Kelly said. "I also get to be closer to my family in California. It's kind of a win-win for everybody."

As a left-handed pitcher, Kelly went 14-0 with a 1.45 ERA, striking out 107 batters and only walking eight, landing the Santa Maria Times All-Area MVP award in 1997.

Kelly played with future major leaguer Doug Bernier on those storied St. Joseph High teams, though he got his start playing at Southside Little League, with the Simas Sporting Goods and Tomooka Farms teams in the early 1990s.

Kelly would spend summers watching the Santa Maria Indians with his father Mike, who played pro ball and umpired college. Mike Kelly played a critical role in his son's playing and coaching career.

"As a kid, it was my dad who really got me going," Jason Kelly said. "He had great knowledge of the game and brought me into it and taught me to enjoy it. I was very lucky to be playing in Santa Maria at Southside with so many good players.

"Then going to St. Joe’s we had that great '97 season and it was really three great years playing with incredible guys. I was lucky to be surrounded with really good players who all stoked the fire for me."

After graduating from St. Joseph, Kelly went on to pitch at Cal Poly. He then redshirted in 2000 and then pitched at Cuesta in 2001, before transferring to Missouri Valley College in 2002.

On the 805 recruiting trail: Lompoc's Ryan Morgan goes from zero offers to two — in less than 24 hours

Kelly then coached at Cal Poly before he joined Lindsay Meggs' staff at Division II power Chico State in 2006. Kelly joined Meggs at Washington in 2012, before moving on to Arizona State after the 2019 season came to an end.

At Washington, Kelly coached 15 pitchers that were selected in the MLB Draft since 2013.

Kelly has shown an interest in coaching players from the Central Coast, particularly in San Luis Obispo. SLO High outfielder Emilio Corona committed to the University of Washington last year. It looks like Kelly will have the chance to work with former Tiger pitcher Cooper Benson in Tempe this year. Benson has signed to play for the Sun Devils.

"I’ve known Cooper since he was probably 7 or 8," Kelly said. "We'd see him at the (Cal Poly coach) Larry Lee baseball camps up in SLO. He's from a great family and he’s turned himself into a really good left-handed pitcher that I think I can help."

The Sun Devils went 38-19 last season. They were knocked out of the NCAA Regional with a loss to South Miss.

The Pac-12 saw two teams make NCAA Super Regionals this year in Stanford and UCLA. No conference teams made the College World Series.

"I feel like the conference got better this summer," Kelly said of the Pac-12. "The new hires and people moving around. It will put some pressure on a lot of those quote-unquote blue bloods like UCLA and Stanford. We're working to catch them and I hope to put ASU is in a position to pitch a little better than they did previously."

"I think, perennially, we can be as good as anyone in the Pac-12. We're kind of chasing them right now."

An instructor high-fived a camper as the youngster walked into Hancock College's Joe White Memorial Gymnasium Tuesday. Minutes later, another …

Washington associate head coach Jason Kelly, second from right, visits the mound during a game against Oregon State in 2018. Last year, Kelly was named the D1baseball.com Assistant Coach of the Year. Last week, Kelly, a St. Joseph High grad, made the move from Washington to Arizona State.