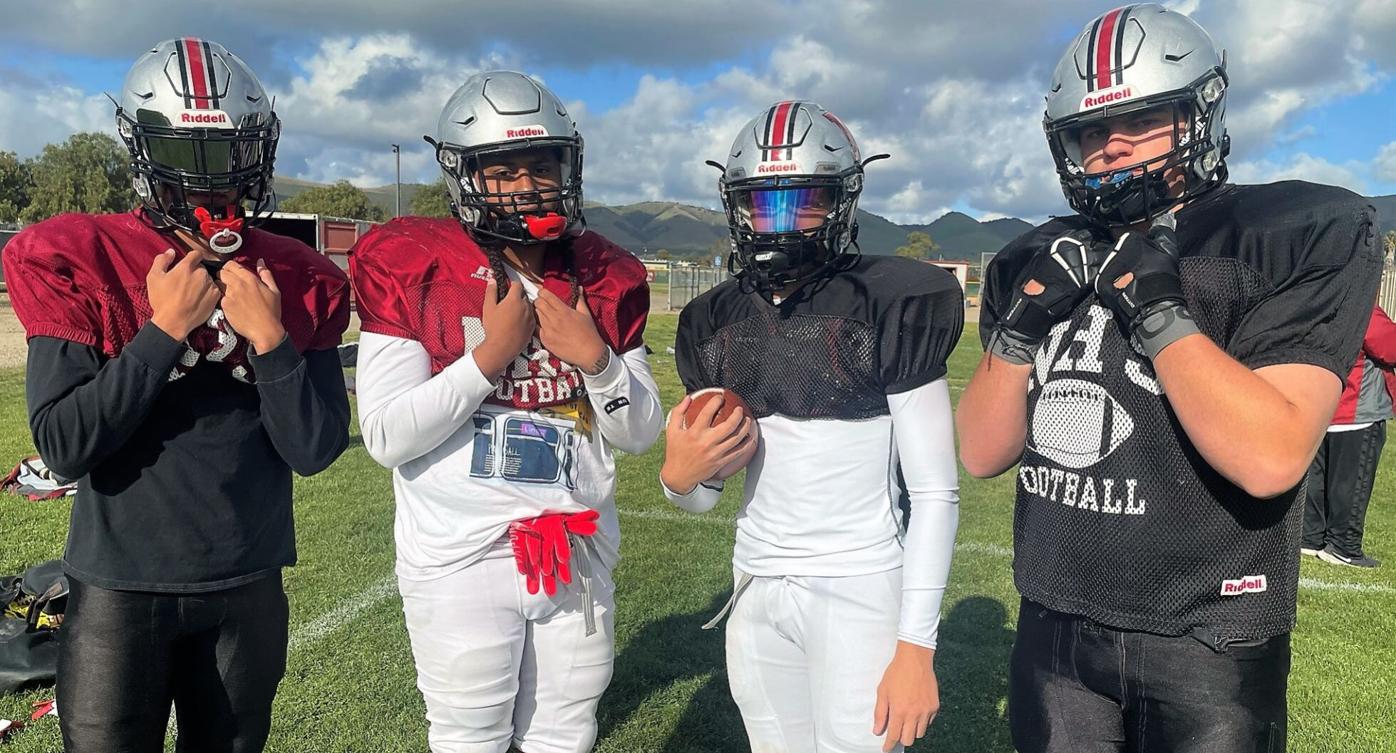 Nipomo's Justin McKee, Keyshawn Pu'a, Declan Coles and Caleb Gretlein are four seniors who will be instrumental in the Titans' spring 2021 season. The Titans kick off the season Saturday at Mission Prep. 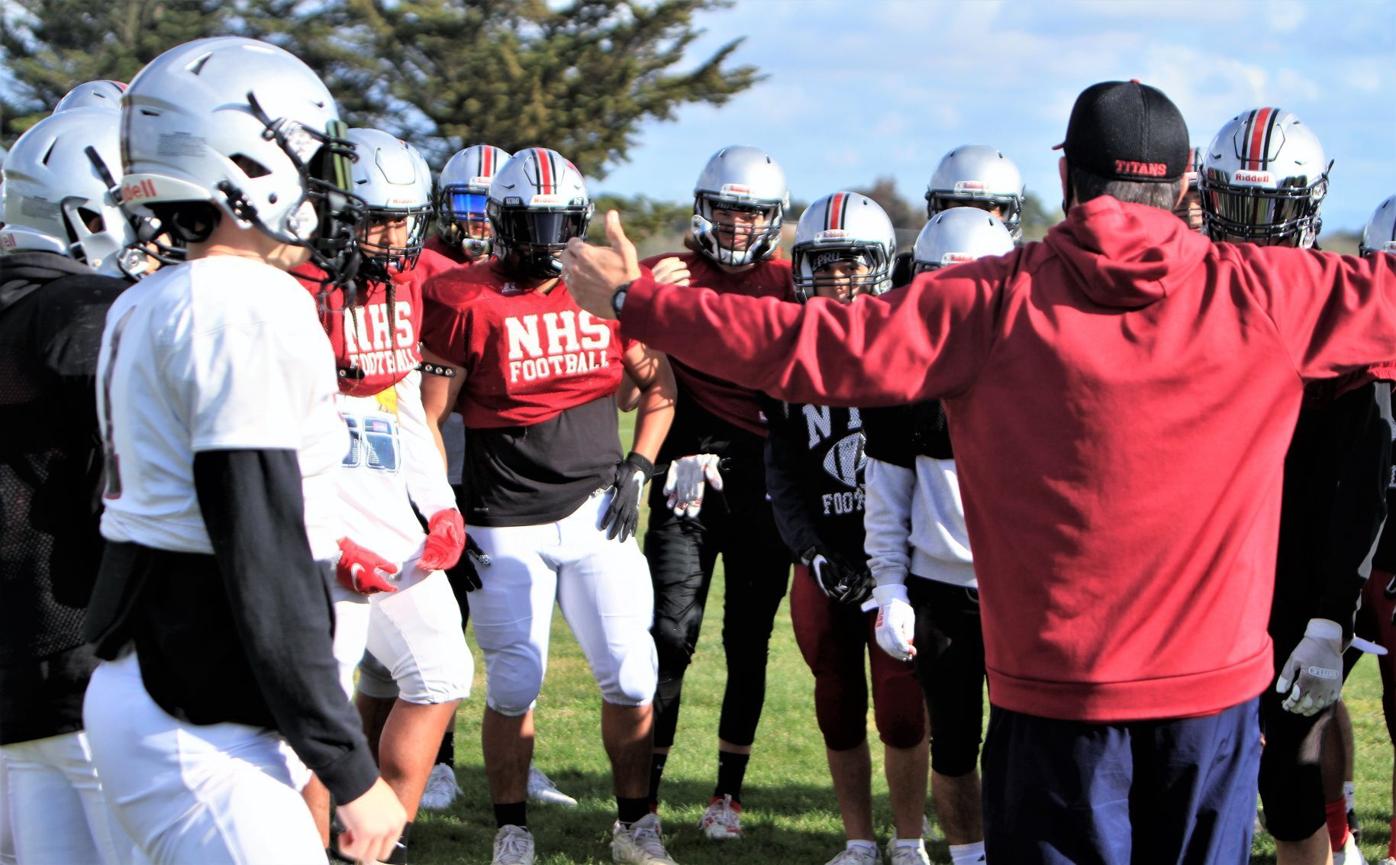 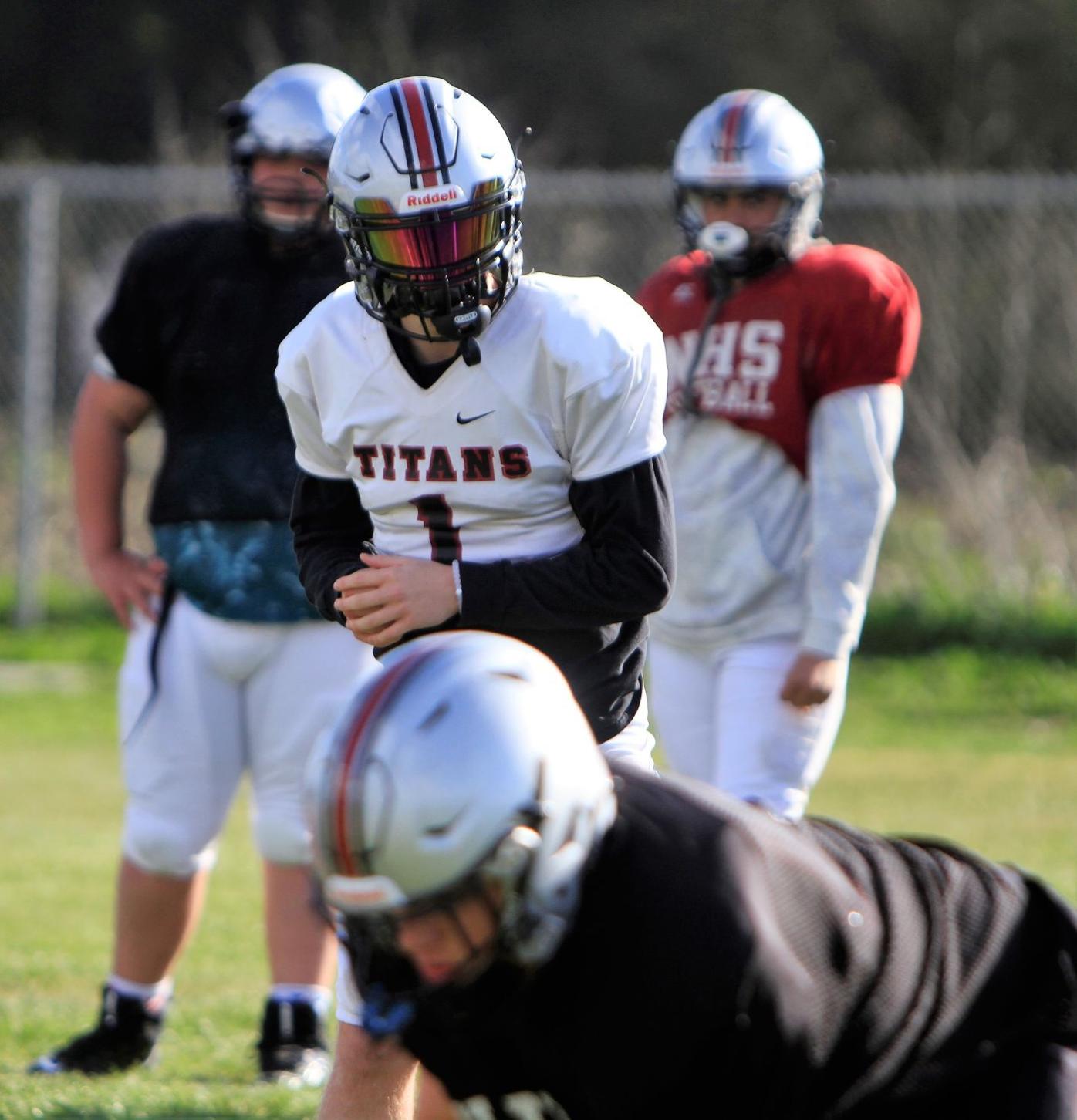 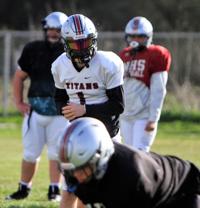 Nipomo's Nate Reese waits for a snap during a practice. Reese and Nick Milton will play quarterback for the Titans this spring season. 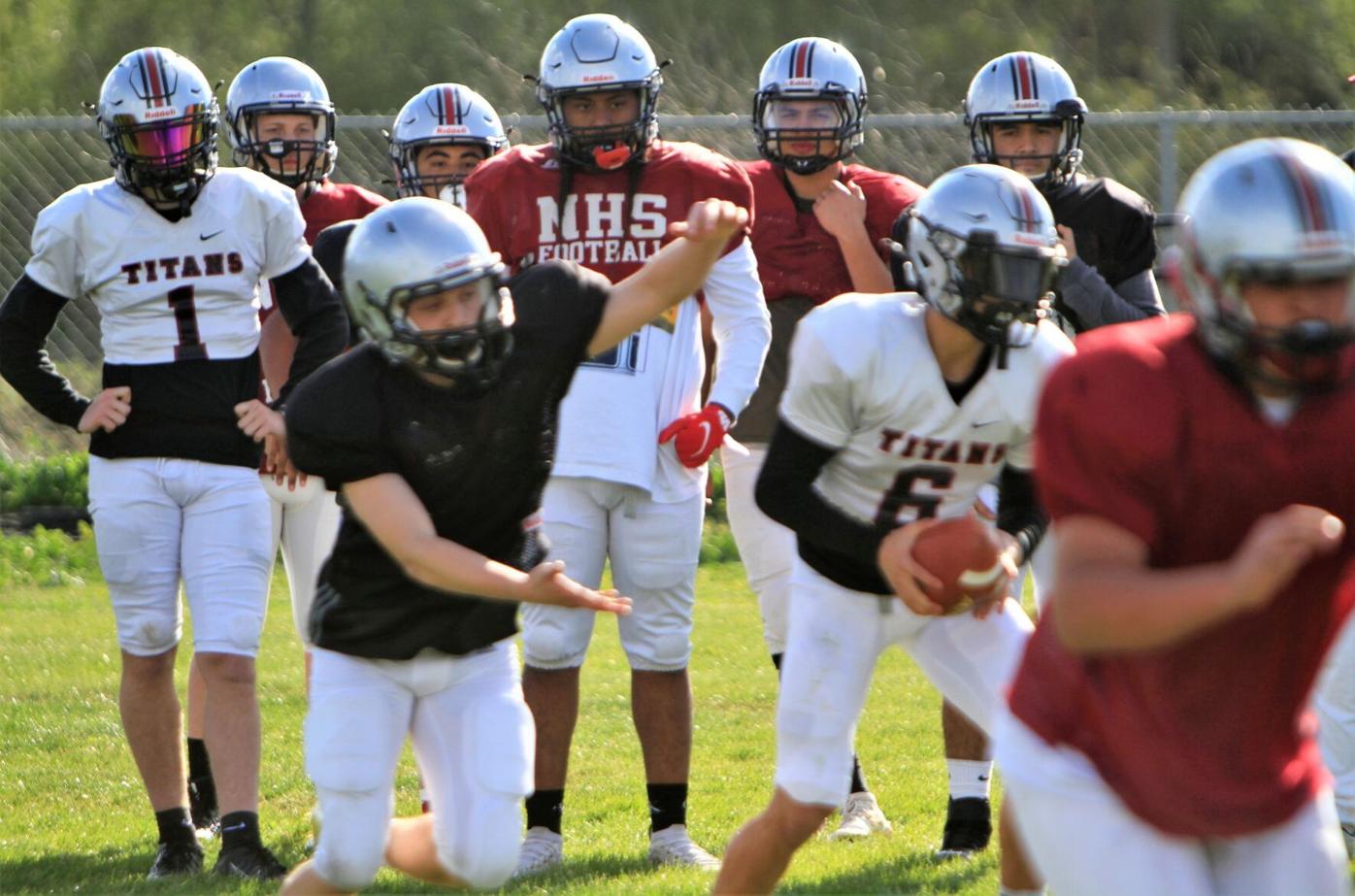 Nipomo's senior Keyshawn Pu'a watches over practice. Pu'a will play linebacker and running back for the Titans.

Nipomo's Justin McKee, Keyshawn Pu'a, Declan Coles and Caleb Gretlein are four seniors who will be instrumental in the Titans' spring 2021 season. The Titans kick off the season Saturday at Mission Prep.

Nipomo's Nate Reese waits for a snap during a practice. Reese and Nick Milton will play quarterback for the Titans this spring season.

Nipomo's senior Keyshawn Pu'a watches over practice. Pu'a will play linebacker and running back for the Titans.

At a recent practice, Nipomo's football team was reviewing an offensive play it had installed the day before.

The Titan offense was having a little trouble lining up correctly, forcing one of the coaches in the backfield to bark out the proper alignment multiple times.

Only the person barking wasn't an actual coach. It was one of the Titans' best players. Keyshawn Pu'a, who only sounds like a coach on the field.

Those around the program say Pu'a has a knack for digesting the X's and O's on the field at an elite level. That skill will come in handy this season, where the Titans have quickly ramped up preparations for kickoff Saturday against Mission Prep.

"We're just trying to figure this thing out and get it together in a hurry," Nipomo head coach Tony Dodge said. "We've got to gel offensively and defensively as quickly as we can."

Nipomo and other area programs have had about three weeks to prepare for the season-opening games scheduled for this weekend. Nipomo is slated to play at Mission Prep Saturday at 1 p.m.

"We're all very excited to be out here and be able to practice, this is the first time we've had some normal football in almost a year," Dodge said. "It's a very exciting time, but also a very nervous time that we have such a short period for preparation. We're out here having fun, doing the best we can and looking forward to playing Mission Prep."

Pu'a, now a senior, has been a force on varsity for nearly all his Nipomo High career. He even filled in at quarterback last year due to injuries but is better suited to start at running back and linebacker for the Titans.

"Wherever the team needs me, if that happens to be quarterback, then I'll play there," Pu'a said.

Though he'll play anywhere, Pu'a said "I think I like defense. Hitting somebody and getting hyped with my teammates."

"We're expecting a lot out of Keyshawn, on both sides of the ball," Dodge said.

Pu'a said he plans to play at Hancock College after high school. His late father, Sandy, was a longtime coach at the school and also played there.

Reese and Milton at QB

Nate Reese and Nick Milton will handle the bulk of the quarterbacking duties for this five-game spring season, allowing Pu'a to shine at his traditional positions. Reese and Milton are similar players with similar skillsets. They're both a bit undersized but have an abundance of athleticism.

"Those are our two guys, Nate and Nick," Dodge said. "They're both very athletic kids and whichever one is not playing quarterback will obviously be playing receiver, DB or somewhere else on the field. The offense will look a little bit different this year with (offensive coordinator) Erik Terry taking full charge of that."

Dodge said the offense features more of a spread look with an up-tempo pace.

"We have a lot of athletes on this team and we're just trying to get them the ball in space," the coach said.

Getting the offensive line up to speed is a big focus of his, Dodge said, noting that skill players have had more opportunities to prep for the season. Offensive linemen need contact and live reps.

"I wouldn't say it's a concern, but it's a work in progress," Dodge said. "Through all this off-time, the skill guys got all kinds of work and that's not the case for the linemen. I'm sure it's a similar situation at every school. We've got to prepare them to be physical, disciplined and knowing their assignments. We've got to get through all that in a hurry."

Caleb Gretlein will anchor the offensive line. He's a 6-foot-3, 265-pound senior with a nasty streak.

"We're definitely grateful to have a season, five games or not," Gretlein said. "I'm glad to be out here with my brothers. We'll do what we do, bang heads and go at it. We've got a good crew here."

Dodge said Gabe Evans, a sophomore, will be counted on to carry the ball in addition to Pu'a.

"I think we have four dudes that can carry the ball," Dodge said. "But those will be the primary ball-carriers."

Declan Coles will also add to the offense at receiver while also playing some defense this year.

Along with Pu'a, Dodge says Vinny Hernandez, a defensive lineman, is a key player on defense.

"Vinny is a big-time leader on defense for us," Dodge said. "He's a defensive lineman/fullback/tight end type. He's very difficult to block during practice and I imagine teams will have to double-team or plan how they're going to block Vinny."

Justin McKee is also a player that Dodge said will be counted on to play all over the field this season.

"Just a month ago we were pretty sure we weren't having a season," McKee said. "So being able to get out here for five weeks of games is great. Actually doing some sports and getting back to normality."

McKee said, "We've got a lot of returners but a few new guys that will have to step up and fill some holes on the field. We're solid, we'll be able to compete this year."

Dodge said playing Mission Prep at 1 p.m. on Saturday will be "like the college experience. It'll be different for the kids and at the same time we get to play football against an opponent."