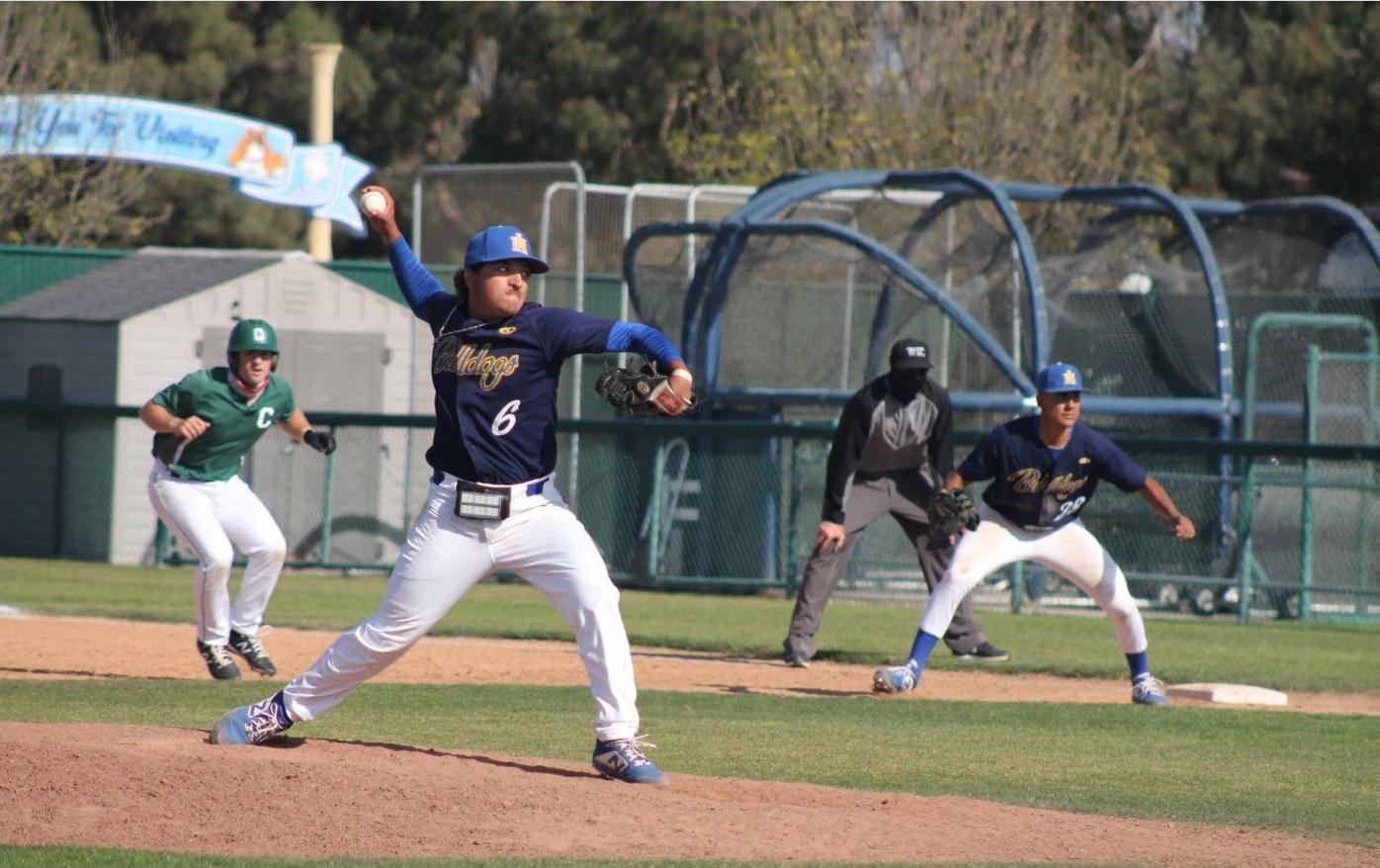 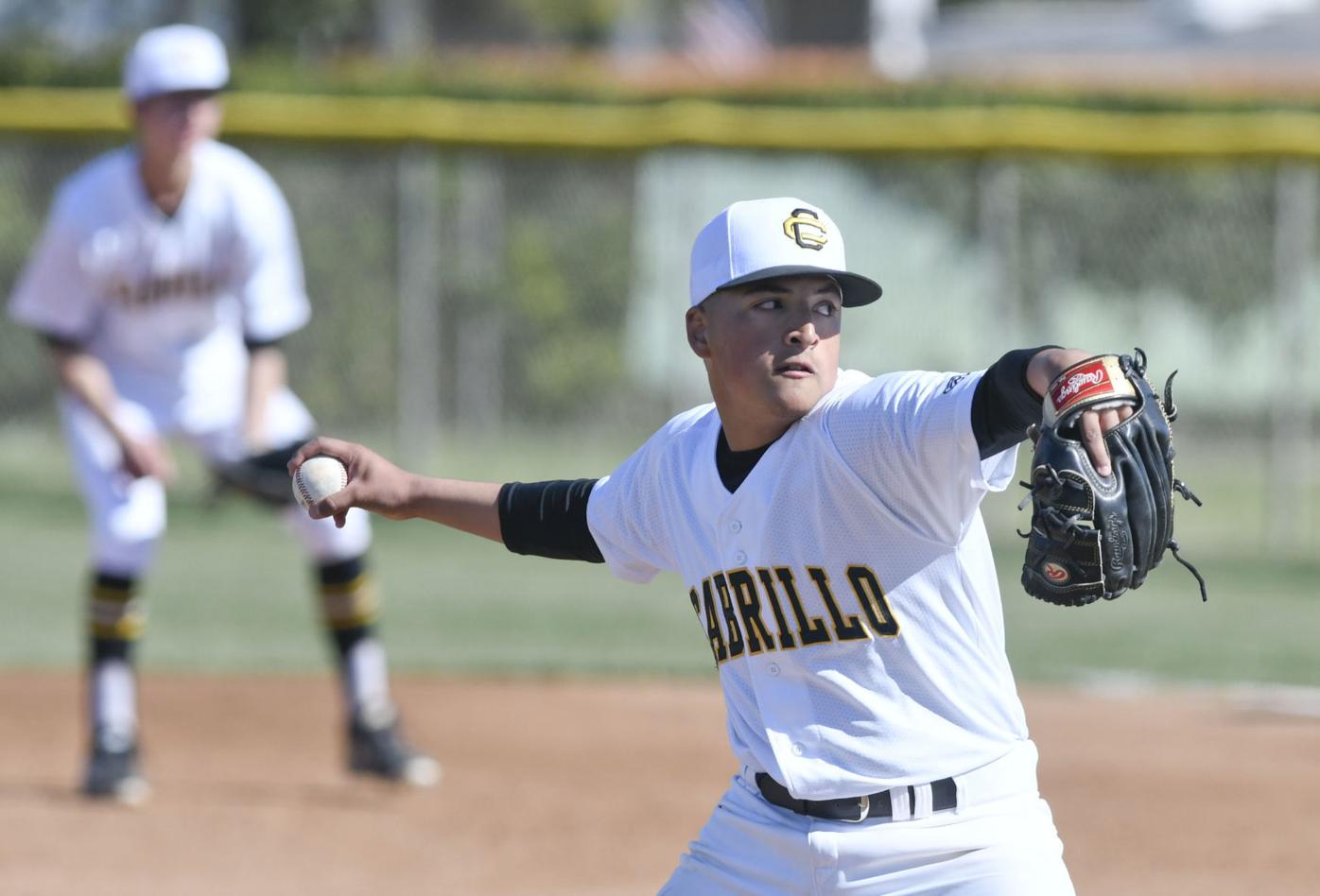 Cabrillo's Matthew Gonzales pitches against San Marcos during a 2019 game. Now at Hancock, Gonzales threw a no-hitter in a win at Cuesta on Saturday.

Cabrillo's Matthew Gonzales pitches against San Marcos during a 2019 game. Now at Hancock, Gonzales threw a no-hitter in a win at Cuesta on Saturday.

In one of the most dazzling pitching performances in Hancock's history, Matthew Gonzales threw a no-hitter at Cuesta on Saturday.

In the second game of a doubleheader, Gonzales pitched nine innings of no-hit ball against the Cougars, striking out seven while walking two. Hancock won 8-1.

Gonzales did hit three batters. He faced just 30 batters over the nine innings.

Lompoc High grad Jeff Ray backed Gonzales with a big day at the plate. The former Brave went 3-for-5 with three runs and two RBIs. Kalub Ramirez, another former Brave, doubled and scored.

The Bulldogs had 10 hits.

The Cougars actually went up first as AJ Esperanza hit into a fielder's choice to Gonzales in the first inning. They wouldn't score again.

Hancock said Gonzales' outing in San Luis Obispo is the sixth no-hitter in school history and the first in 18 years. Jack Creighton threw a no-hitter for the Bulldogs in an 11-0 win over LA Valley in 2003. Jeff Mayberry threw a no-hitter against Chabot in 2001.

The no-hitter capped the Bulldogs' sweep of Cuesta in Saturday's doubleheader. Hancock beat Cuesta 6-3 in the opener as Ray went 2-for-2 with two runs and an RBI.

Jacob Ortega had three RBIs in that win, hitting a home run and a two-run single. Vander Hodges earned the win in that game, going seven innings while striking out three and allowing just three hits.

The Bulldogs enter the week 5-3 on the season after three straight wins over Cuesta. Hancock beat Cuesta 16-6 last Thursday at John Osborne Field.

Joey Freitas also drove in four runs for the Bulldogs.

Steels singled in a run to give the Bulldogs a 2-1 lead in the bottom of the first. A sac fly from Ramirez made it 3-1.

Cuesta's Jaden Cabbab hit a two-run homer to tie the game at 3-3. Lompoc grad Jeffrey Ray gave the 'Dogs a 4-3 lead on a fielder's choice, Freitas drove in Trevis Welker for another run and Steels brought home two more with a single to make it 7-3.

Ramirez homered in the fourth inning, a three-run shot that brought Steels and Jacob Ortega home. Welker also doubled in a run, Evan Kling tripled in Steels and Freitas hit a bases-clearing double to make it 16-6.

Trenton Pallas went 2-for-4 with two runs and an RBI.

The Bulldogs had 14 hits on the day and didn't commit an error.

The Lompoc High softball team entered the week 7-1 on the season after a 32-0 drubbing of Santa Barbara.

The Braves are set to play Dos Pueblos on Wednesday at 3:30 p.m. in Goleta.

Santa Ynez had 10 hits, but it wasn't enough. Molly Kadlec had two hits and Michaela Baker had three.

Pioneer Valley, meanwhile, routed Atascadero, moving to 3-1 this spring with a 47-12 win.

Righetti is set to play at Templeton Friday in its final game of the spring. The Warriors are 3-1.

Santa Maria ended its spring season with a 49-7 loss at Paso Robles. The Saints added the non-league game to gain some experience and traveled with 18 players suited up to face the Mountain League opponent. The Saints finish their spring slate with a 3-3 record.