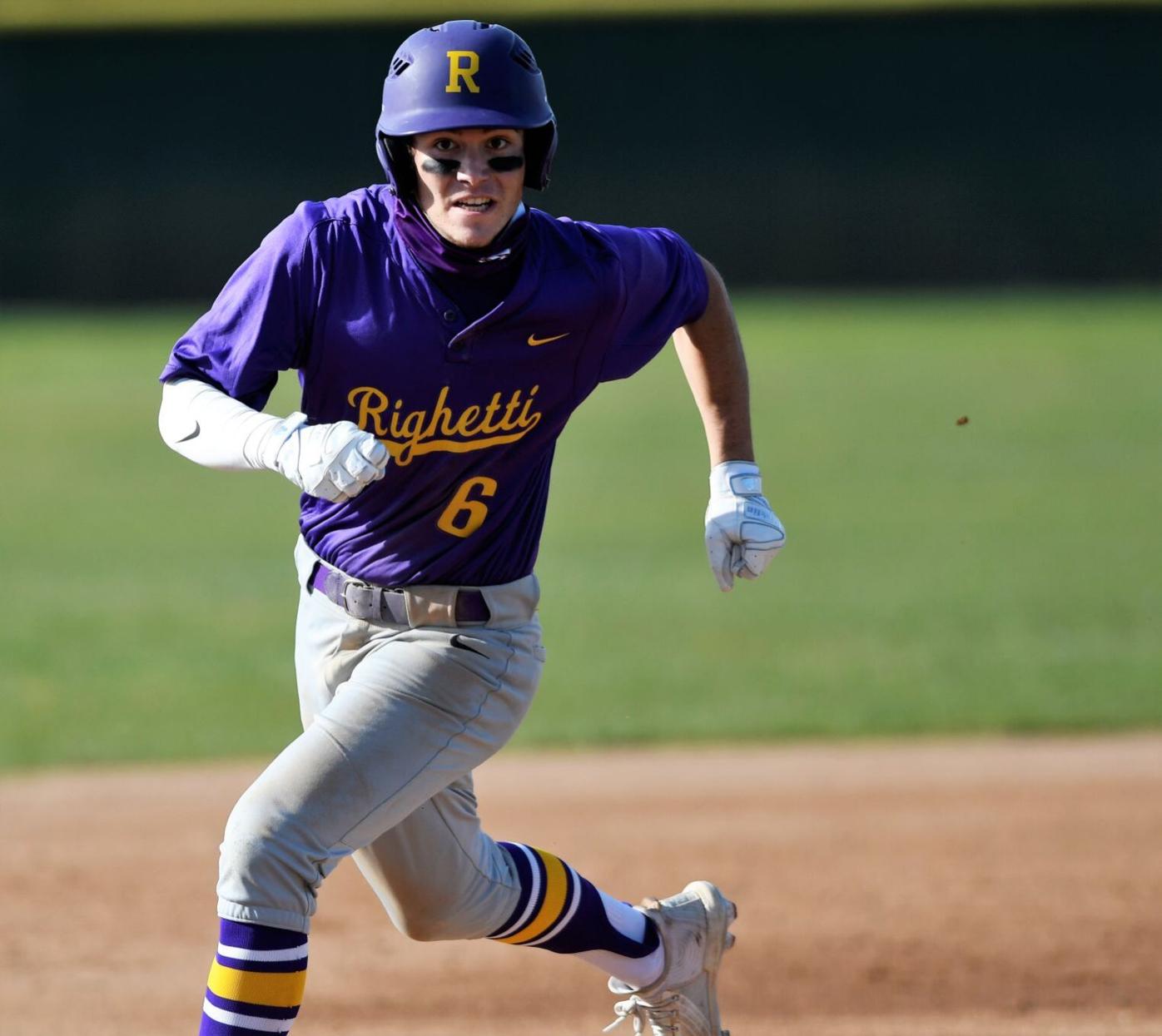 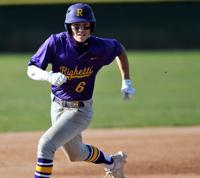 Righetti's Cooper Bagby takes third base during a game at Pioneer Valley last month. Bagby earned the win on the mound in Righetti's 3-2 win at Morro Bay in the first game of a doubleheader Wednesday. Chris Miller then threw a complete game to earn the win in the 3-2 win in the day's second game. 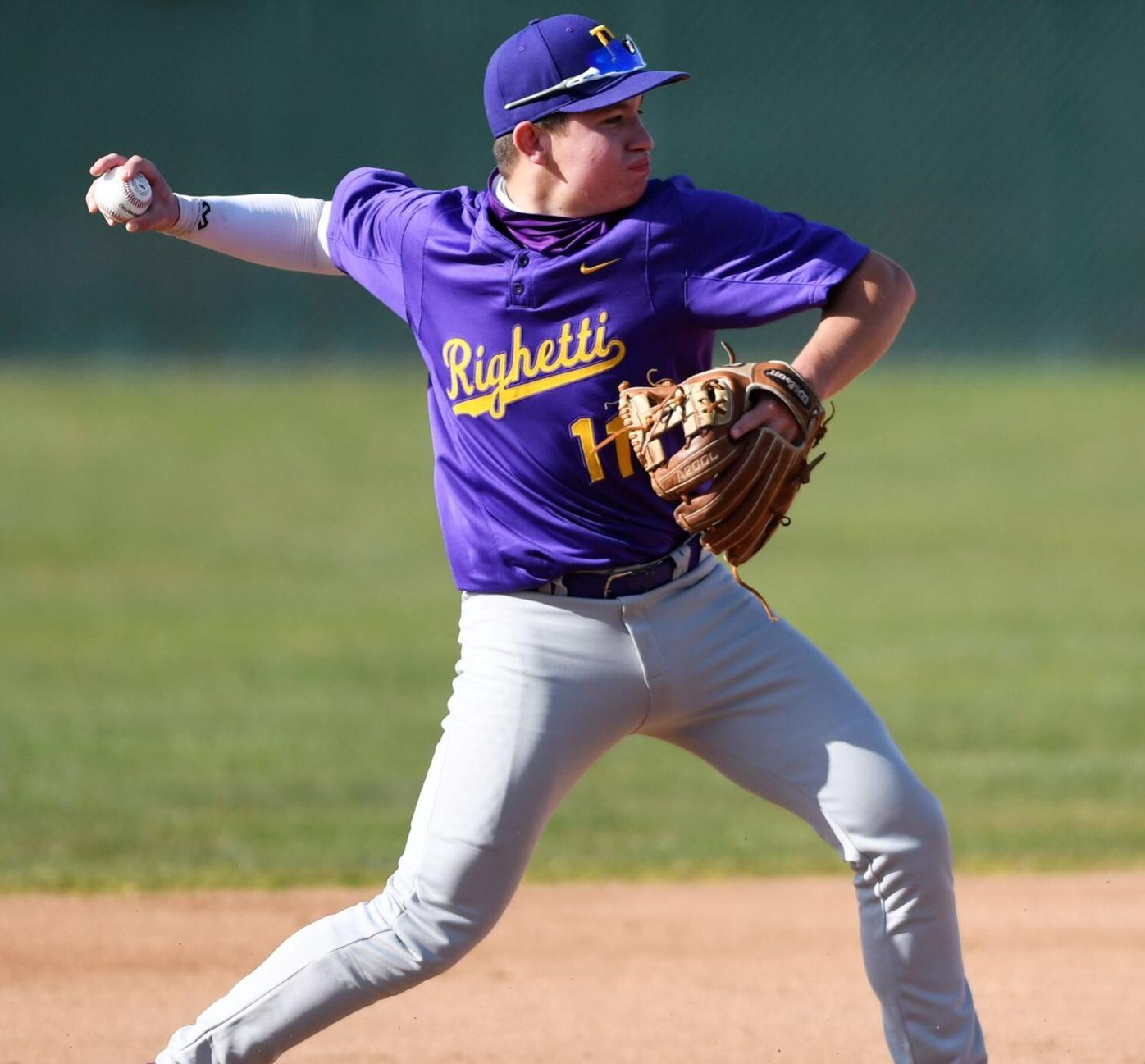 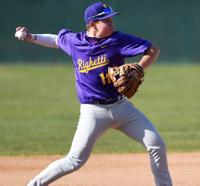 Righetti's Gavin Long fires the ball to first base for an out during Wednesday's game at Pioneer Valley. On Saturday, Long brought home the lone run in a 1-0 win over Santa Maria with an RBI triple. 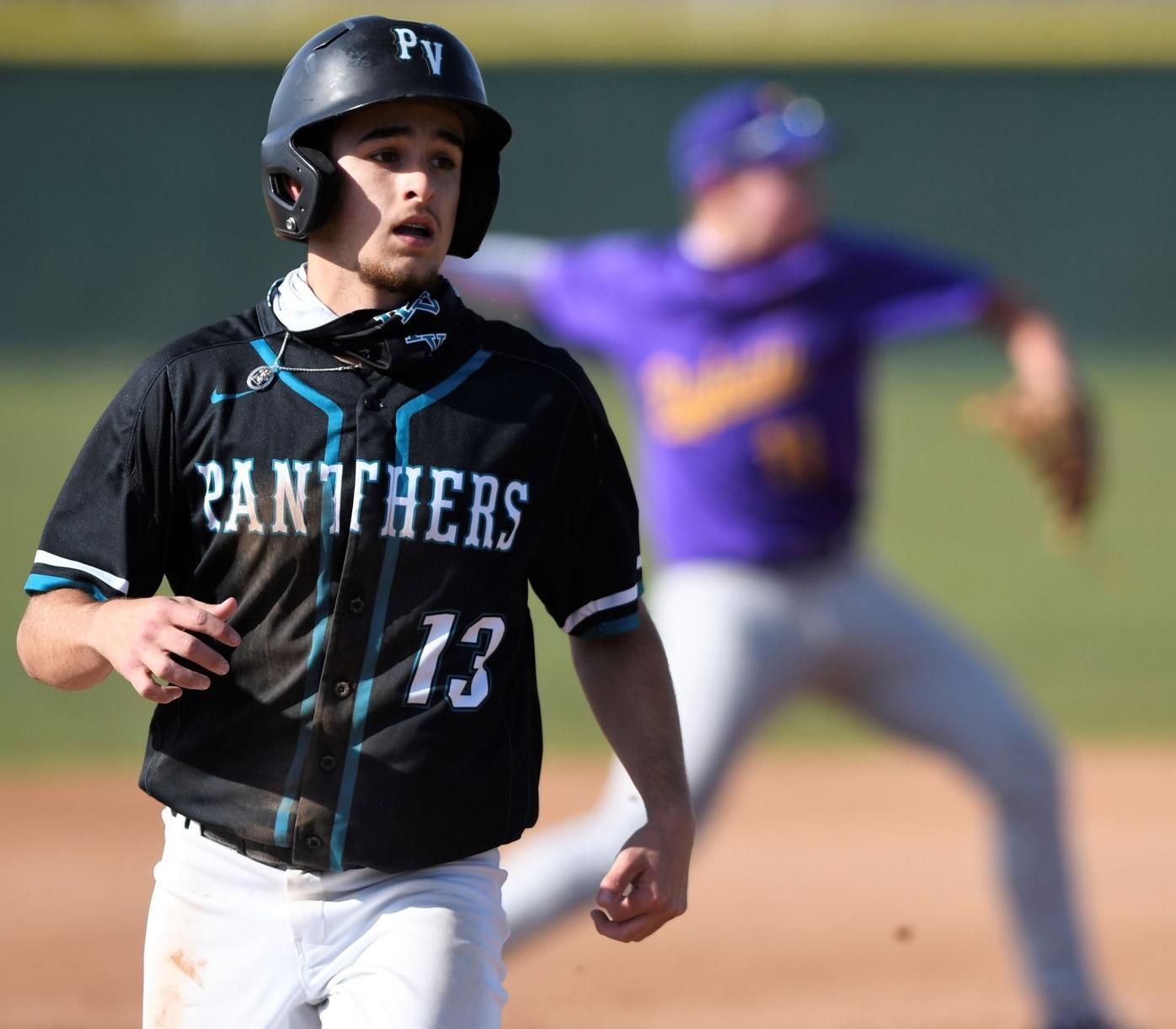 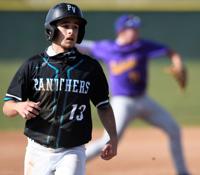 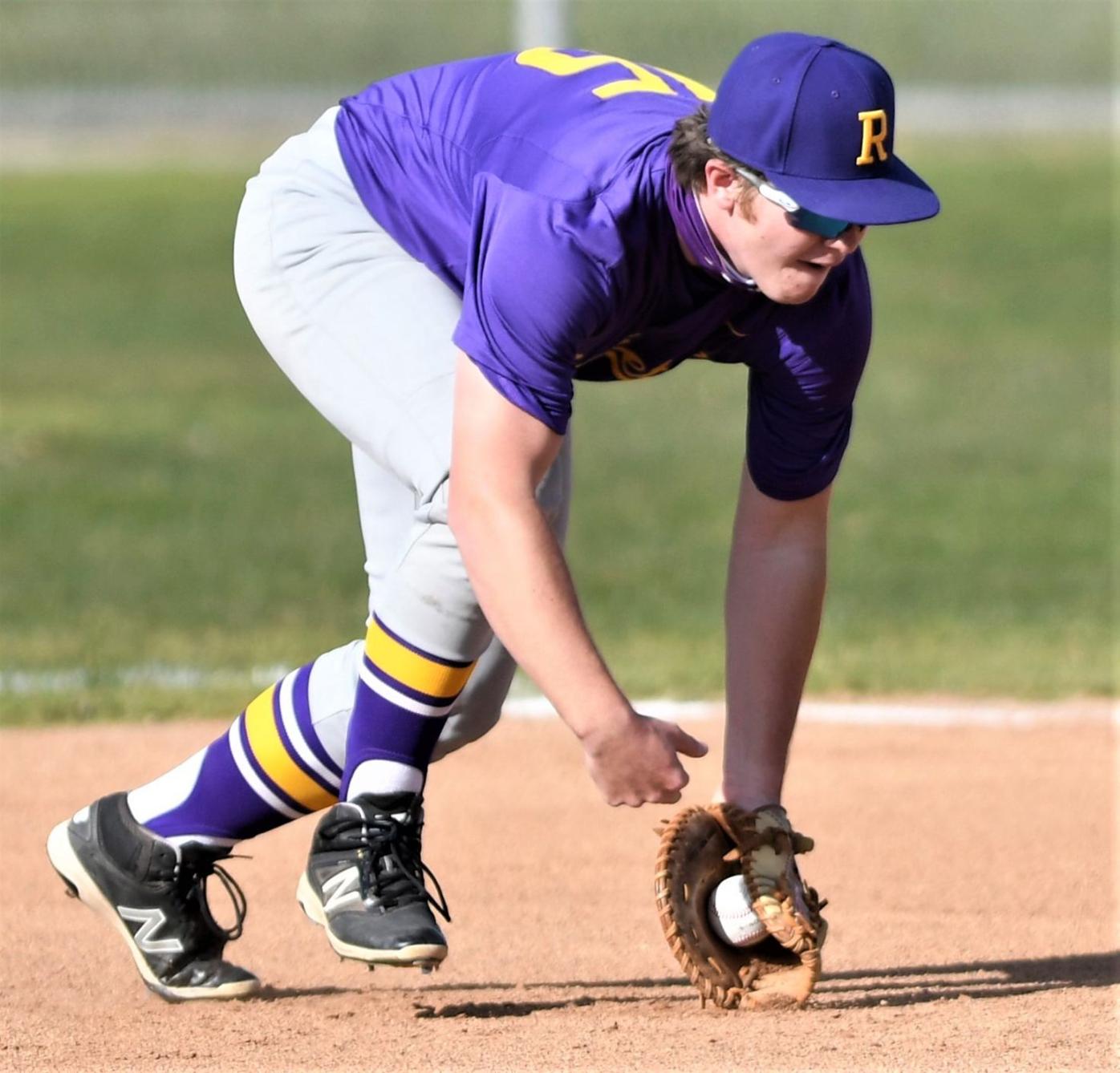 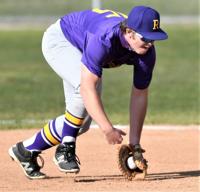 Righetti first baseman Quigley Espinola fields a ball and heads to his bag for an out during Wednesday's game at Pioneer Valley.

Righetti's Cooper Bagby takes third base during a game at Pioneer Valley last month. Bagby earned the win on the mound in Righetti's 3-2 win at Morro Bay in the first game of a doubleheader Wednesday. Chris Miller then threw a complete game to earn the win in the 3-2 win in the day's second game.

Righetti's Gavin Long fires the ball to first base for an out during Wednesday's game at Pioneer Valley. On Saturday, Long brought home the lone run in a 1-0 win over Santa Maria with an RBI triple.

Righetti first baseman Quigley Espinola fields a ball and heads to his bag for an out during Wednesday's game at Pioneer Valley.

The Warriors' baseball team fended off a game Pioneer Valley squad 6-4 in its second game since baseball returned this spring. Righetti started its season on Saturday with a 6-4 loss at San Marcos.

Righetti then scored two more in the third inning before Pioneer Valley answered with two more runs to tie the game, but Righetti was able to do enough offensively to get past the Panthers, who fell to 0-2. Pioneer Valley started its season Saturday with an 11-1 non-league loss to San Luis Obispo.

Righetti started sophomore Omar Reynoso on the mound. Reynoso went two innings and Blake Almaguer pitched the third before Isaac Flores, a junior, came on in relief to close out the game and earn the win. Righetti's pitchers combined to give up just four hits while striking out six.

Brendan Manriquez started for the Panthers and made some key pitches, but he was not helped out by his defense. The Panthers committed six errors, the first two of which led to the first two Righetti runs.

Cooper Bagby singled to start the first scoring burst. A pop fly hit by Ricky Smith was dropped then a wild pitch and a walk loaded the bases. A dribbler was then bobbled in the infield to allow a Bagby to score. Smith then came around to score as Manriquez induced a 6-4-3 double play started by shortstop Jesus Nava.

Pioneer Valley junior Angel Beltran sparked Pioneer Valley's first scoring output with a bunt that brought in a run. The rally was started by freshman catcher Josue Garcia, who singled and came around to score on Beltran's key bunt. Manriquez then walked in a run to tie the game at 2-2.

Righetti went up on a sacrifice fly by Quigley Espinola.

The Warriors tacked on another run to go up 4-2 in the third inning, but again Pioneer Valley answered with two runs of its own to tie the game. But the Warriors were able to pull away afterwards.

Baseball: Santa Maria moves to 2-0 with win over SLO

The Warriors pounded out six runs on six hits with three errors.

Bagby went 2-for-3 with two runs. Gavin Long had the lone extra-base hit for the Warriors with a double. Smith and Brodie Miller each had hits for Righetti.

Beltran had two hits for the Panthers. Sophomore Andy Morales pitched the final four innings in relief for Pioneer Valley.

Pioneer Valley was without some of its top players due the Panther football team being placed in quarantine due to positive COVID-19 cases. Righetti's football team is also in quarantine and there are several football players who are also playing baseball for Righetti this spring.

The Warriors are also missing starting catcher Andrew Gonzalez, who's out with a broken hand.

Righetti is set to host unbeaten Santa Maria (2-0) on Saturday at 11 a.m. Pioneer Valley is slated to host Paso Robles at 3 p.m. Saturday.

Vic Heredia scored the winning run on a Caleb Casidy single in the fifth inning then struck out four in his two innings on the mound as the Pirates ran their record to 2-0.

Heredia doubled home Bradley Alexander to give Santa Ynez a 2-0 lead then scored on the Casidy hit.

Tanner Costa went 2-for-3 for the Conquistadores.

Braves moved to 2-0 on the season with a win Wednesday. They play Santa Ynez on Saturday before facing rival Cabrillo on Wednesday.

The Braves started the season Saturday with a 2-1 win over Dos Pueblos.

Santa Maria defeated San Luis Obispo in a non-league game at home Tuesday by a score of 8-5.

That moved the Saints to 2-0 on the season following last Saturday's 6-2 win at St. Joseph.

The Saints can get another win against a Mountain League team on Saturday: They play at Righetti at 11 a.m. then. Righetti is set to play at Pioneer Valley Wednesday at 4:30 p.m.

Julien Sepulveda had three hits to get 3/4 of a cycle: he had a single, a double and a triple. Brayan Nunez also notched three hits for the Saints. Raymond Rodriguez had two.

Joey Saucedo was the starting pitcher. He gave up four runs over two innings before Ricky Figueroa came in and went five innings and only gave up one run.

Arroyo Grande moved to 2-0 with a win over the Dons Tuesday. A.G. started the season with a 10-3 win over Mission Prep.

Iris Jensen, at No. 3 singles, and Emma Pelech, at No. 4, each earned a singles win for the Eagles. Then they teamed up for a win at No. 2 doubles.

The Pirates won at home over the Braves as Erik Guerrero had a goal while Ricardo Romero and Bryan Garcia both scored two goals apiece. Alberto Luquin assisted on Garcia's first goal as the Pirates won their season-opening game under head coach Hector Garcia.

The final Santa Maria Babe Ruth late-bird sign-up date is set for Thursday from 6-8 p.m. at the Bases Loaded batting cages in the mall.

All new incoming players need to bring a copy of birth certificate and proof of residency.

Also, for anyone interested in managing/coaching, there are a couple positions open.