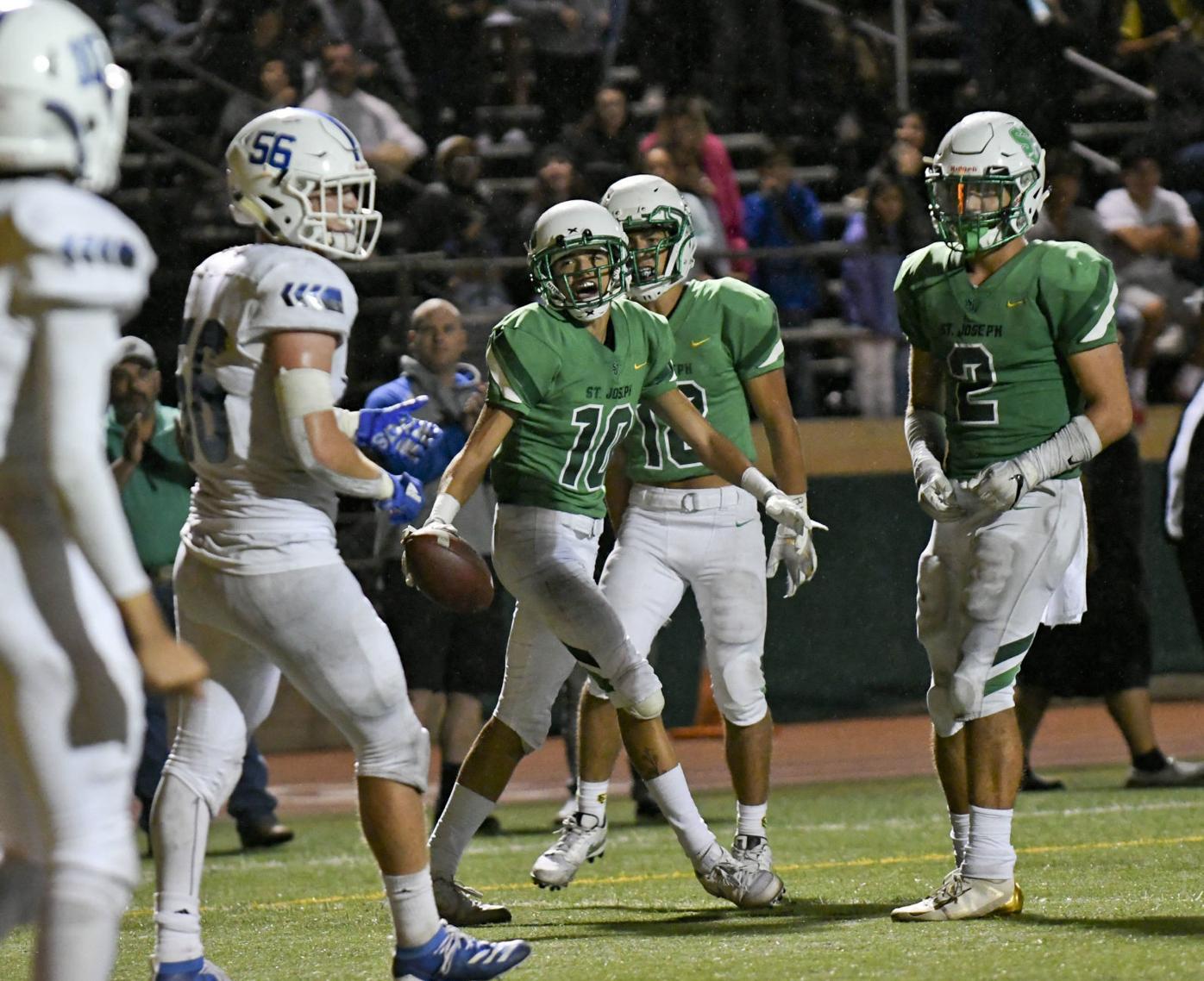 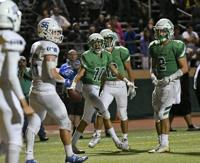 St. Joseph's Patrick Heard celebrates a two-point conversion catch in 2019 against Lompoc. Football could be coming back to the area after the California Department of Public Health released updated guidelines for high-contact sports Friday. 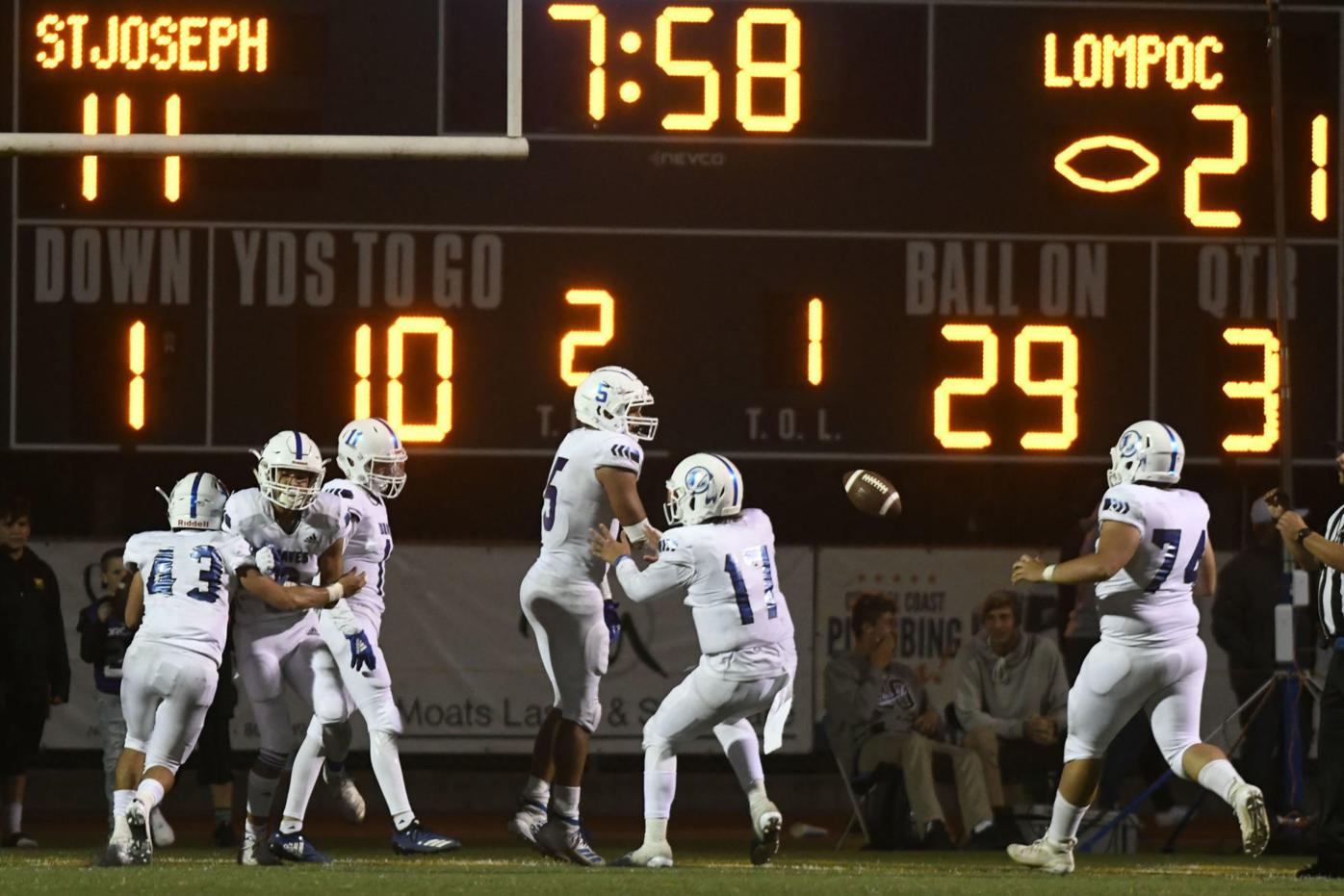 Lompoc players celebrate Ryan Morgan's 72-yard touchdown run against St. Joseph in the fall of 2019. Football could be coming back to the area after the California Department of Public Health released updated guidelines for high-contact sports Friday. 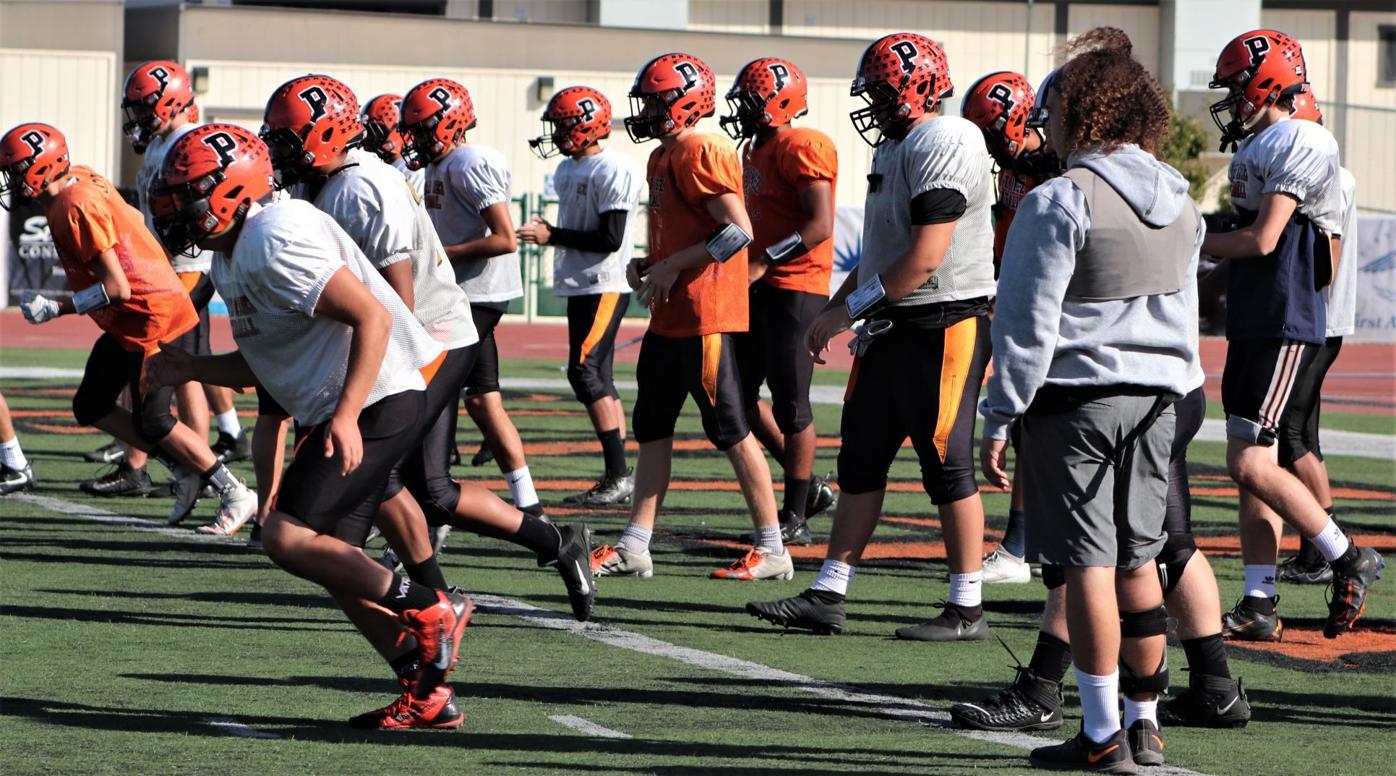 The Santa Ynez Pirates warm up at the start of Wednesday's football practice. The Pirates host the San Marcos Royals Friday night on Senior Night when Santa Ynez will honor the 16 seniors on the squad.

St. Joseph's Patrick Heard celebrates a two-point conversion catch in 2019 against Lompoc. Football could be coming back to the area after the California Department of Public Health released updated guidelines for high-contact sports Friday.

Lompoc players celebrate Ryan Morgan's 72-yard touchdown run against St. Joseph in the fall of 2019. Football could be coming back to the area after the California Department of Public Health released updated guidelines for high-contact sports Friday.

The Santa Ynez Pirates warm up at the start of Wednesday's football practice. The Pirates host the San Marcos Royals Friday night on Senior Night when Santa Ynez will honor the 16 seniors on the squad.

The California Department of Public Health announced Friday that outdoor high-contact sports can be played in areas that are in the purple and red tiers under certain conditions.

The announcement makes it easier for high school football and other contact sports to return to the area, though testing of student-athletes is a requirement for areas with a higher case rate. Football practice could begin as soon as Feb. 26 in areas that can adhere to the new guidance.

Previously, areas had to be in the orange tier to play football and other high-contact sports.

In the guidance released Friday, the CDPH said outdoor high-contact sports that are in the orange tier, such as football, soccer, rugby and water polo, can be played in areas with an adjusted case rate between 7 and 14 per 100,000, under certain conditions. Either antigen or PCR testing is required for athletes and coaches in football and girls and boys water polo.

Pioneer Valley and St. Joseph back on course as high school golf returns to Central Coast

The current adjusted case rate in Santa Barbara County was 27 Friday. In San Luis Obispo County, it was 15.6. The case rate is typically updated every week and the new official numbers should be released by the counties on Tuesday, Feb. 23.

With the state opening up a path to football and other outdoor contact sports Friday, a lot of the final decisions now fall at the feet of county health departments and local school districts.

The state said it will be working with school districts to do testing. The guidance is for participants 13 years of age and above.

"I think the state did the right thing for these kids," Santa Ynez football coach Josh McClurg said Friday. "There are millions of kids playing high school football and other sports across the state."

Lompoc football coach Andrew Jones added, "I've been waiting for this day forever. I don't care if it's right in the middle of snowboarding or golf season, if we have the chance to play football, let's do it."

Villasenor said, "If we have to play at Robin Ventura Park, we'll do it."

Jones said his school has a five-game schedule in place that could start March 19. Teams will need 10 padded practices before the season starts and the Braves' schedule will mirror last year's Channel League schedule, with the six 2019 Channel League teams playing each other. The football season would end by April 17.

The testing requirement only applies in the following situations: For football, rugby and water polo as these are high contact sports that are likely to be played unmasked, with close, face-to-face contact exceeding 15 minutes, the CDPH guidance said.

The state health department said "evidence shows that younger children do not seem to be major sources of transmission—either to each other or to adults."

McClurg said even if his program has to help fund testing, his school will get it done.

"I know with my football boosters club and parents, that won't be an issue," McClurg said.

The CDPH said additional guidance that should be implemented to the greatest extent possible, including face coverings during play, physical distancing during play, testing (antigen or PCR), hygiene and sanitation, limitations on mixing by participants and travel considerations.

The guidance also said that observers should be limited to immediate household members, and for the strict purpose of age appropriate supervision.  This includes observation of practice and competition.

The high school football season has been twice delayed this school year. Most area teams have been preparing for a season by holding conditioning sessions on campus.

The high school sports world came to a screeching halt in March of 2020 at the onset of the coronavirus pandemic. The high school football season, which was slated to be played last fall, has been in a holding pattern. It was pushed back to December last year and delayed again to January. Now teams could start practicing in a week.

"I'm cautiously excited," McClurg added. "I don't want to jump the gun yet, we need county approval, district approval, but I know our superintendent Scott Cory wants these sports to be played."

Transportation could be an issue as schools are not transporting students to competitions currently.

Jones said keeping his players on the team has been a struggle. He had about 60 players early in the school year but his numbers have dropped to around 30 as uncertainty that a season would happen grew.

At St. Joseph, Villasenor said his school is still building a tentative schedule.

"From what I've heard, it will be five or six games and the athletic directors within the area will be meeting after the CIF commissioners meet and we'll have a better idea at that point."

Jones added, "It's a huge step in the right direction, but I know some of us are like 'We'll believe it when we see it. "We are excited, but we just got to figure out some of these logistical things as far as testing and handing out gear. Our school district will do whatever it takes to get athletes back on the field, all student-athletes.

"I know CIF has been taking a lot of bullets in this thing and it has nothing to do with them. They've had to follow the state recommendations and now there's some real hope."

Friday's update did not provide any good news for indoor sports. The CIF Southern Section released a statement Friday that at least brought the notion to schools' attention that they could start playing indoor sports outdoors.

"We will continue to be in discussions with the Governor's Office and the California Department of Public Health on a plan for return to play for indoor sports," the CIF-SS statement from commissioner Rob Wigod read. "However, if possible, indoor sports can begin to play outdoors, if your county meets the required threshold of 14 cases or less per 100,000 people..."