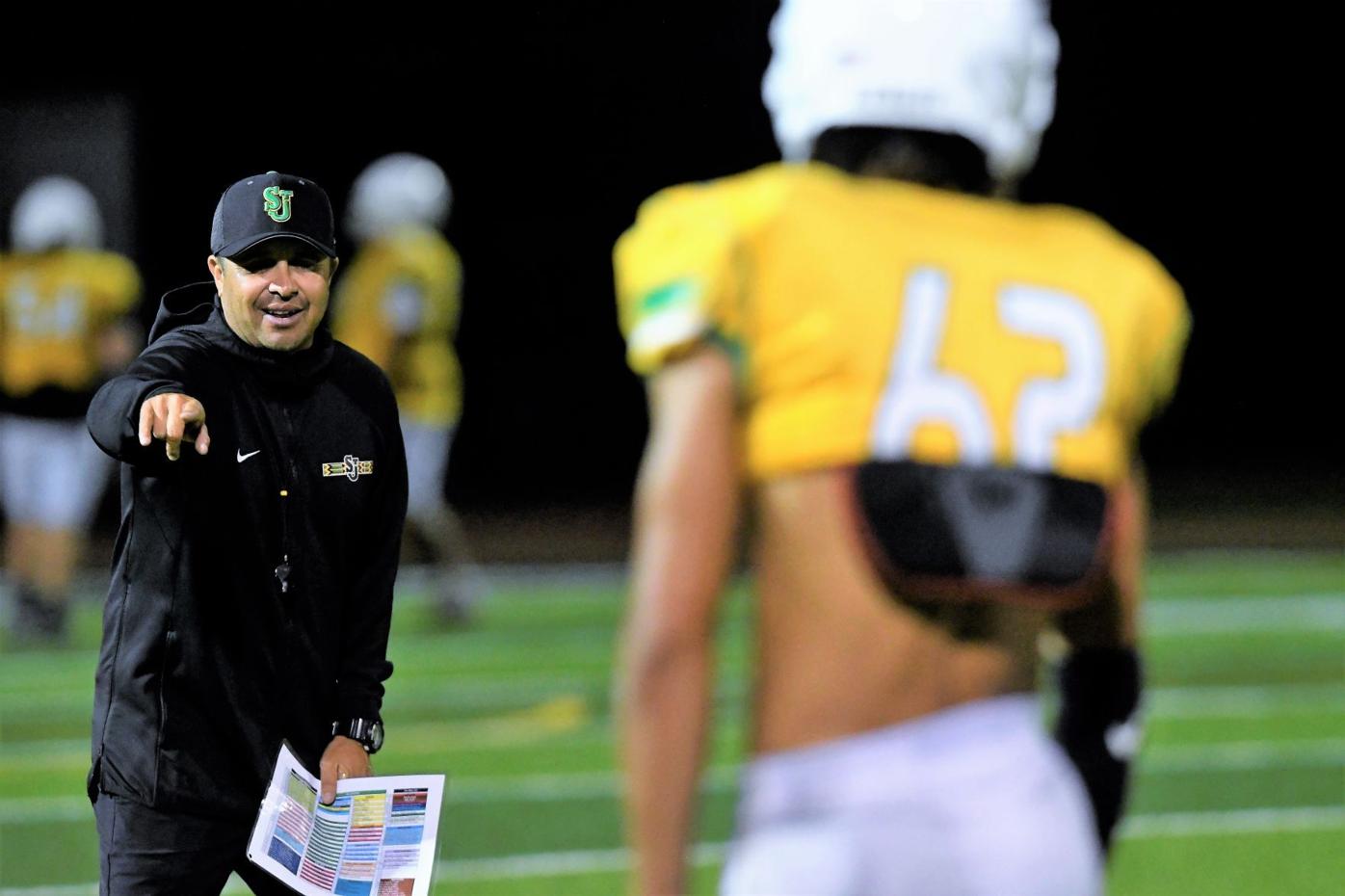 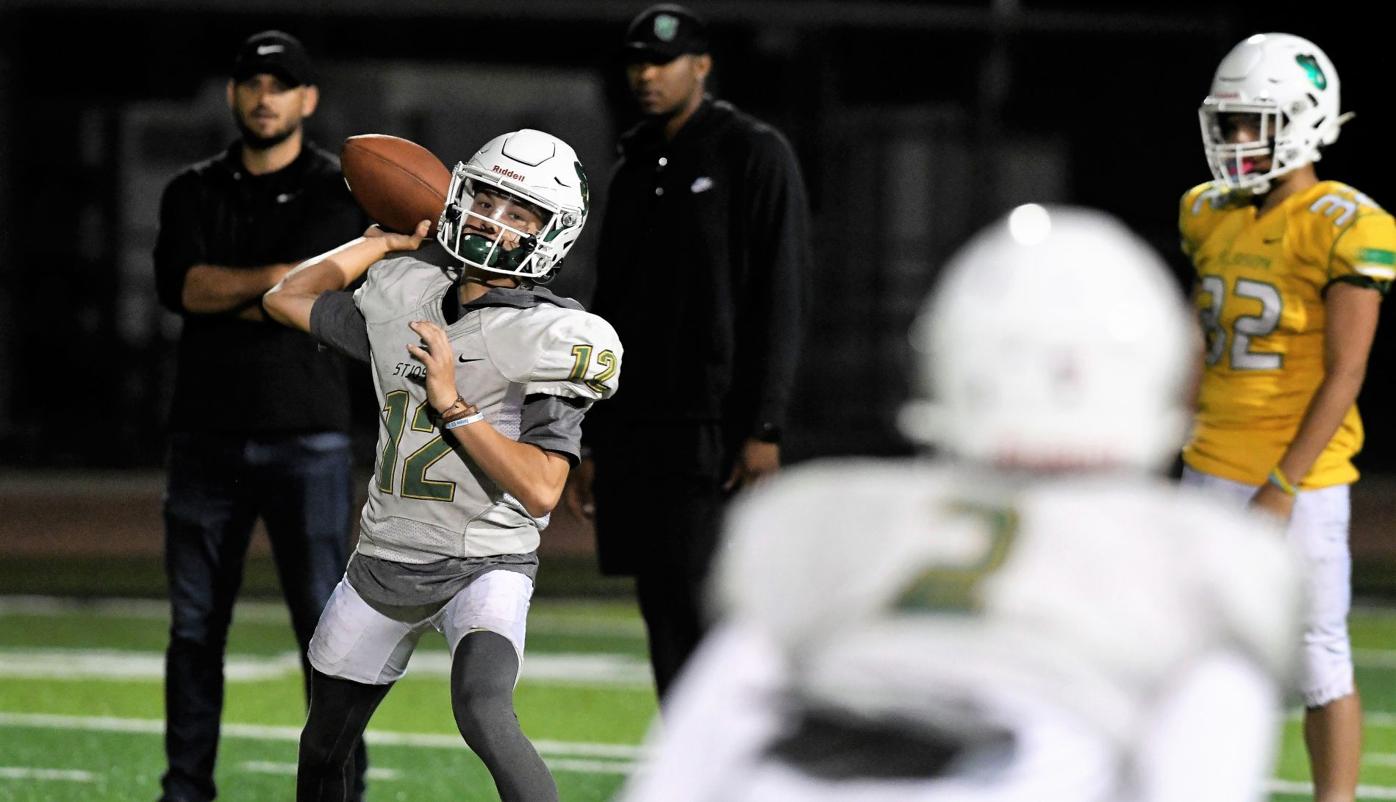 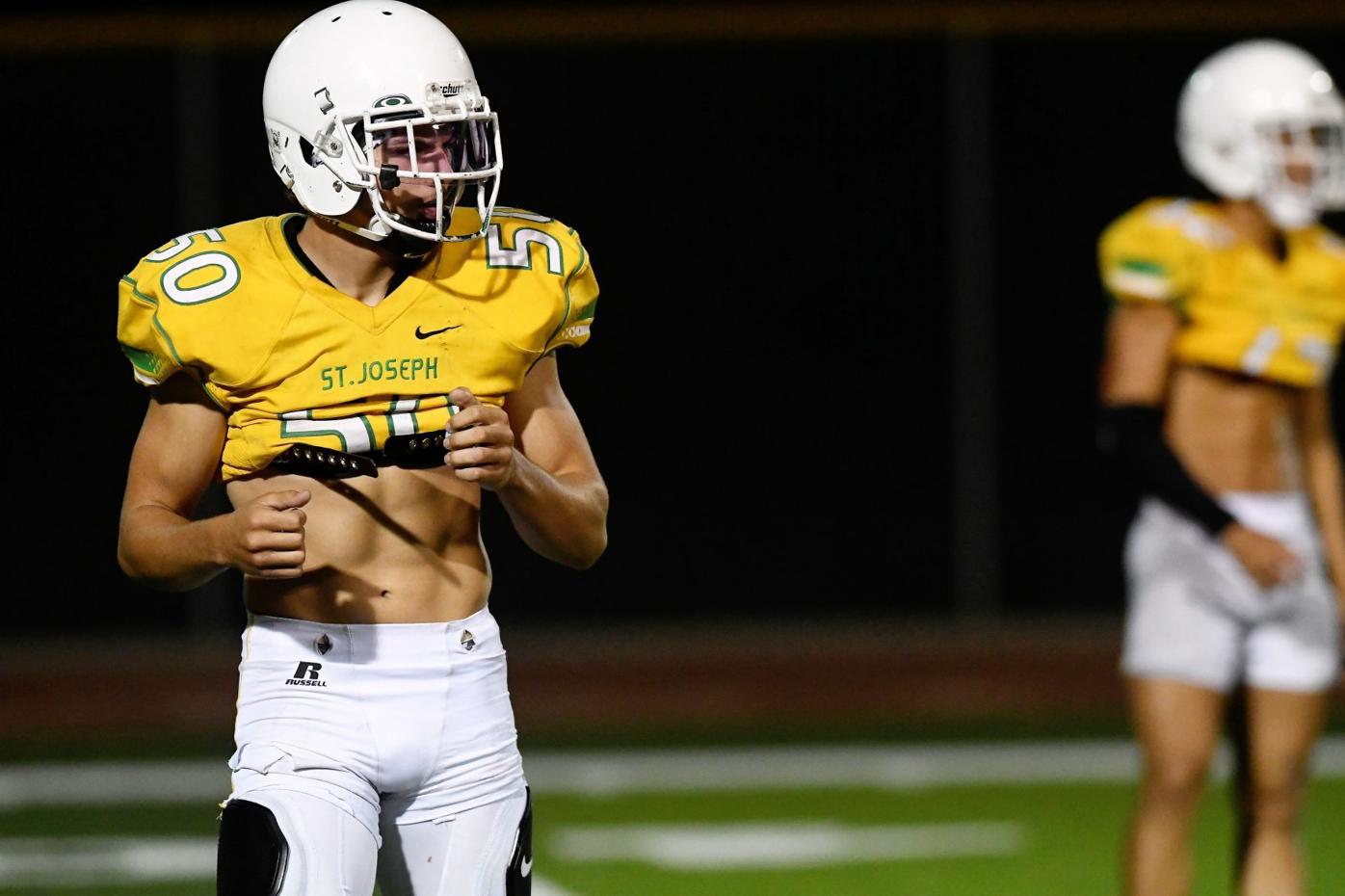 Safety/running back Chris Miller has transferred to St. Joseph after having a productive junior season at Righetti last spring. 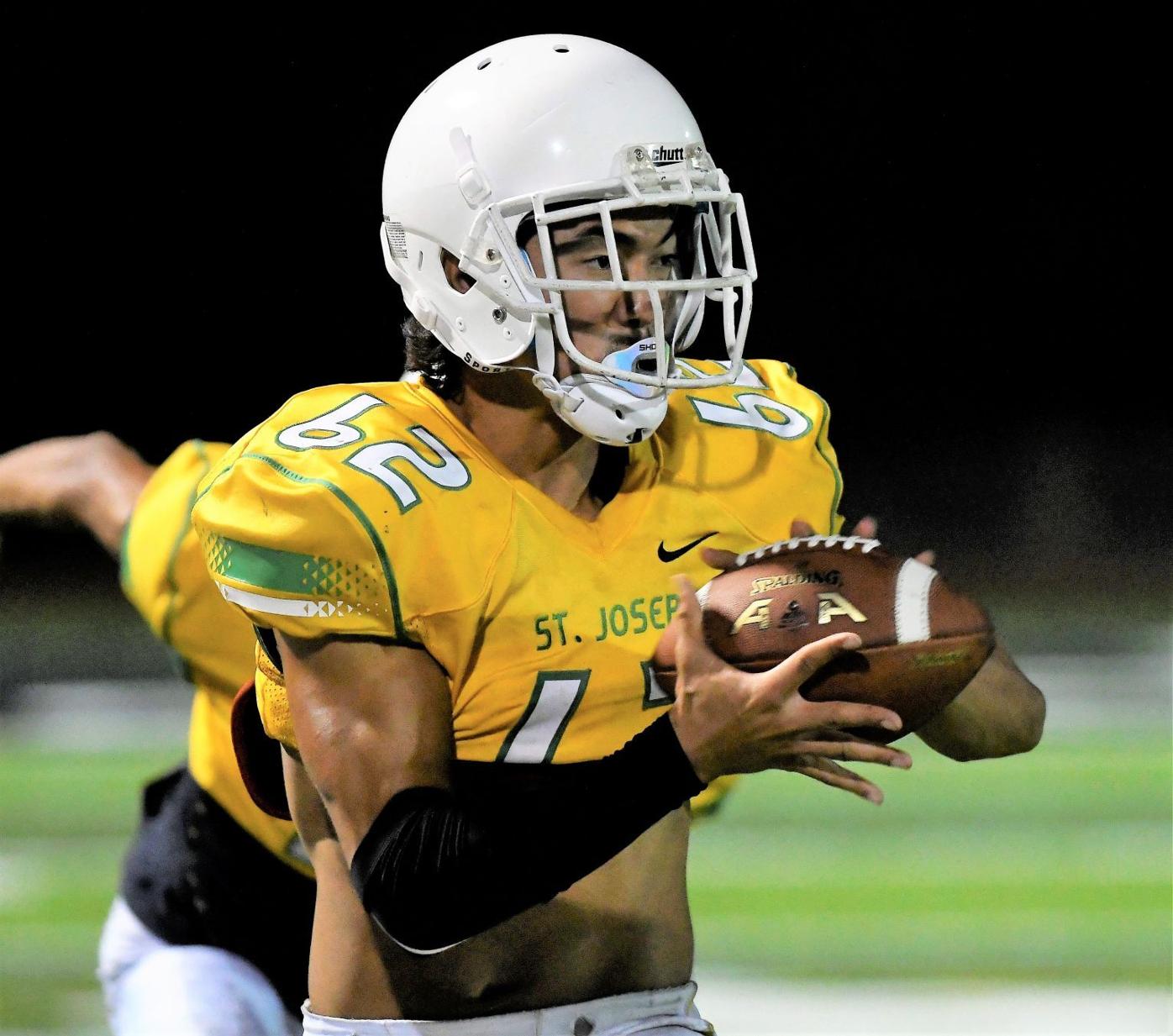 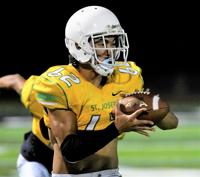 St. Joseph's Travis Royal had seven catches for 156 yards and three touchdowns in the Knights' 35-33 loss at Bakersfield Frontier on Friday. 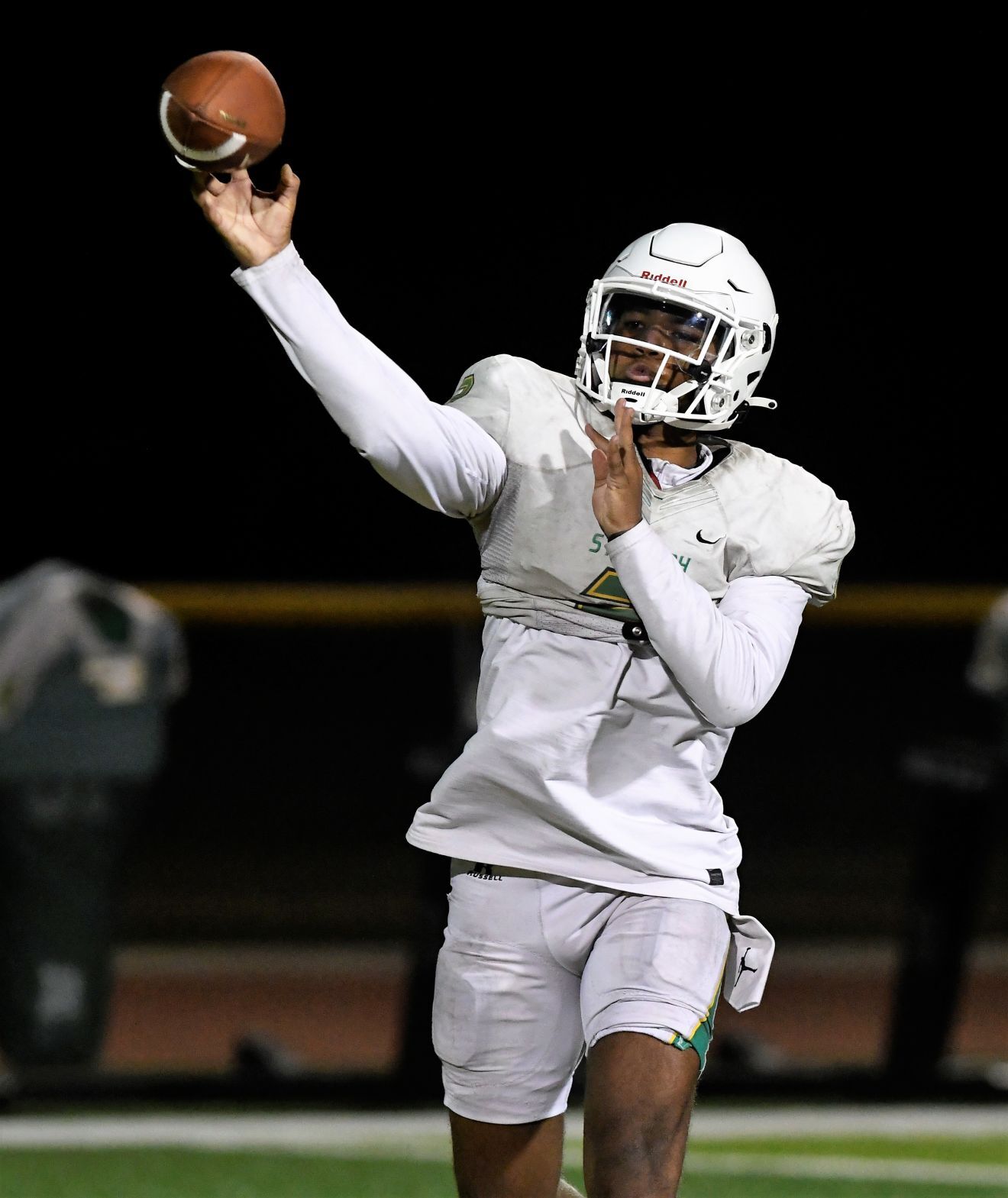 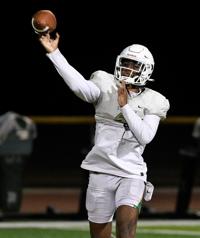 Darien Mensah, who played at San Luis Obispo previously, is now at St. Joseph and will play some quarterback and receiver this fall. St. Joseph opens its season Friday night with a game at Covina Charter Oak. 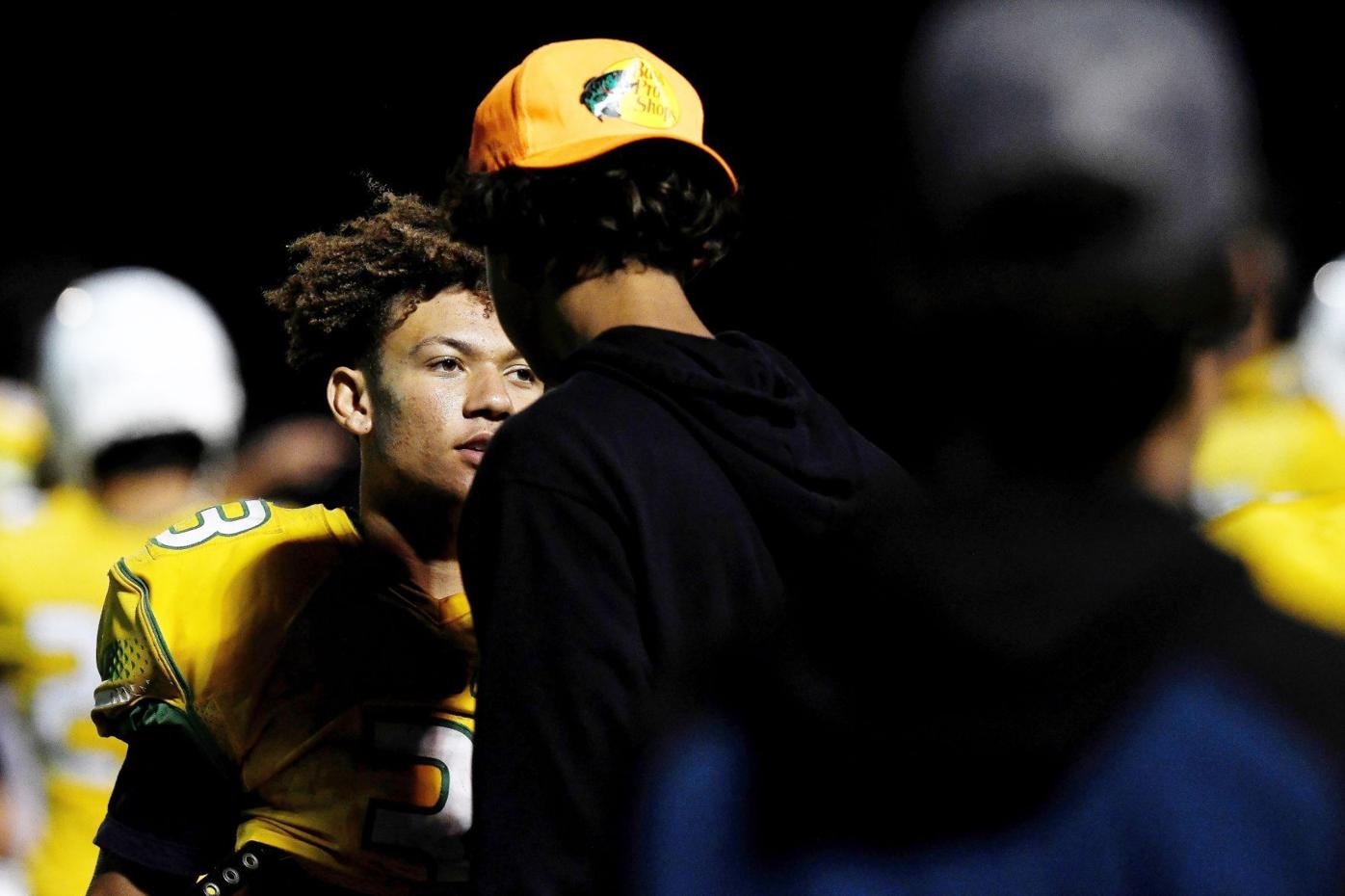 St. Joseph sophomore Malakai Langley is one of the fastest players in the area. St. Joseph opens its season Friday night with a game at Covina Charter Oak.

Darien Mensah, who played at San Luis Obispo previously, is now at St. Joseph and will play some quarterback and receiver this fall. St. Joseph opens its season Friday night with a game at Covina Charter Oak.

The Predictions: Which teams will start their seasons on the right foot?

The football program at St. Joseph has been on the rise since coach Pepe Villaseñor arrived on campus three seasons ago.

Villaseñor is 22-7 in his first three seasons with the Knights and hasn’t lost a league game, going 12-0 in the process.

It doesn’t appear that the rise is stopping any time soon.

The Knights are riding a wave of momentum into the 2021 fall season coming off a dominant 5-0 spring campaign.

They hit the road Friday night to kick off their season with a game at Covina Charter Oak. Kickoff is slated for 7 p.m.

Football: Nipomo ready for challenge after moving up to Mountain League

St. Joseph is quite strong at a number of positions, but they’ve got talent stacked up at quarterback. Caden Cuccia, a sophomore, is the incumbent after starting three games as a freshman.

Darian Mensah, a San Luis Obispo transfer, is the backup and will play some receiver. Mensah is 6-foot-3 and 190 pounds. Mark Crisp started at the beginning of the spring season but tore his ACL in March and hopes to be back by October, though he may fill in at another position.

“We have several quarterbacks and they’re going to compete each and every day,” Villaseñor said at a preseason practice. “Right now, Caden is the starter. We’re certainly excited about Mark (Crisp) coming back in the next few months. You’ll probably see him at several positions.”

The biggest hole to fill for the Knights may be running back as they lost both starters to graduation in Brett Burress and Darien Langley.

Villaseñor said that the Knights will employ a committee at running back.

Villaseñor said Aaron Fierro has a similar power running style to Burress and will get some carries. Brice Pavlich will also get some touches out of the backfield.

The offensive line looks very strong with standout Makai Sat back at tackle.

"Makai is definitely the anchor to the offensive line," Villaseñor said. "We do have some young guys there."

Aaron Guggia is also a returning three-year starter on the offensive line.

Travis Royal is the top returning receiver and is poised for a big season. Villaseñor was a standout receiver himself at St. Bonaventure High School in Ventura and Royal says some of the coach’s teachings have rubbed off on him.

“I’d say, since I got here, I’m probably about five times better than before,” Royal said. “Just due to the knowledge that he holds and gives to me.”

Royal says he’s elated with the quarterback potential the Knights have this season.

“I have two or three guys back there that I can trust when I run my routes and they can trust me,” Royal said. “It’s just really nice to know that we are going to have someone that we can rely on no matter what.”

Royal says he expects Righetti transfer Chris Miller to alleviate some pressure at wide receiver and earn some targets, adding that Collin Fasse and Oscar Magallon will help the offense.

“We’ll be able to spread the ball around,” Royal said. “We don’t have to force the ball anywhere, we can just go where the defense dictates.”

Better as season goes along

St. Joseph should be strong to start its season but don’t be surprised if they’re much better towards the end of it. That’s mainly due to a number of players that will become eligible after serving a CIF-mandated sit-out period.

Righetti transfer Joaquin Cuevas, who started at quarterback for the Warriors, is slated to play at safety this year, but won’t be eligible until Sept. 22. Hayden Steven, Erwin Taomi, Vince Vargas and Jason Vargas are also cleared to return by Sept. 22, according to the CIF Central Section’s transfer portal.

Miller, the other Righetti transfer, was hoping to be eligible at the start of the season, though his status was not known at press time. Miller had a big season at free safety and running back for Righetti in the spring before transferring to St. Joseph for his senior season.

Taomi, a native of Alaska, is 6-foot-3 and about 380 pounds and will likely be a force on the defensive line once he’s cleared to play.

Villaseñor said Mensah is cleared to start the season Friday.

Anthony Moreno had a sneaky good junior season in the spring and is back, with Villaseñor saying he’ll see more time at running back this fall while also starting at linebacker.

Moreno notes the Knights are losing two big-time players on that defense in Tyler Williams, who’s now at UTEP, and Jayce Gamble, who’s walking on at Sacramento State.

“We don’t have Tyler or Jayce or a guy like Sebastian Ramirez, but Malakai Langley is stepping up at corner, Carter Vargas at safety,” Moreno said. “Those two are young sophomores that kill it every single day. Erick Santillan, my other inside linebacker, has been working hard all offseason. He’s been working his butt off all offseason.

“I think we’re going to be the top defense on the Central Coast this year.”

Moreno also expects big things out of Marky Pullman and Jorge Hernandez on the defensive line.

Mark Crisp working his way back to the field... again

Moreno also has some good insight on the St. Joseph offense from his linebacker position.

“They’re just so dynamic. There’s so much they can do,” Moreno said of the SJHS offense. “That offense gives us some trouble sometimes. They have quarterbacks that can run and throw. Malakai has ‘Class A’ speed. Going against it every day makes us better.”

When asked about filling the shoes of a linebacker like Gamble, Moreno says he hopes he’s able to play at that level this fall.

“I hope to be that guy,” Moreno said. “I saw Jayce all over the field when I was at safety, now I’m in his position. I want to have that same kind of presence in the middle. I think I can have that kind of presence.”

The Knights will face a new league alignment after San Luis Obispo and Templeton both dropped down to the Ocean League and Nipomo and Pioneer Valley were both bumped up.

What's more interesting is how the playoff format changes this year with CIF Central Section divisions being decided after the regular season is complete.

"We'll play our 10 games and then they'll take your power rankings and at that point in time the top eight will go to Division 1," Villaseñor said. "Then the next 16 will go into Division 2 and so on. We're going to play our best for 10 games and see what happens."

When asked if he liked this new system, Villaseñor said with a smile: "No comment on that."

The Knights will have a new pair of kickers after Brock Marcois graduated. One of those kickers includes girls soccer standout Kailah Lopez.

"I'll tell you right now, it's definitely not a gimmick," Villaseñor said of Lopez. "She does an exceptional job. Her range is good, she does have a strong leg. She puts in the same work as the guys out here do. We do have a long-distance kicker in Dan Melendez and a kickoff guy in Jacob Otremba. And Jonathan Lee is handling the punts. Kids are specializing more today, so we're lucky to get two soccer kids in with Lopez and Otremba."