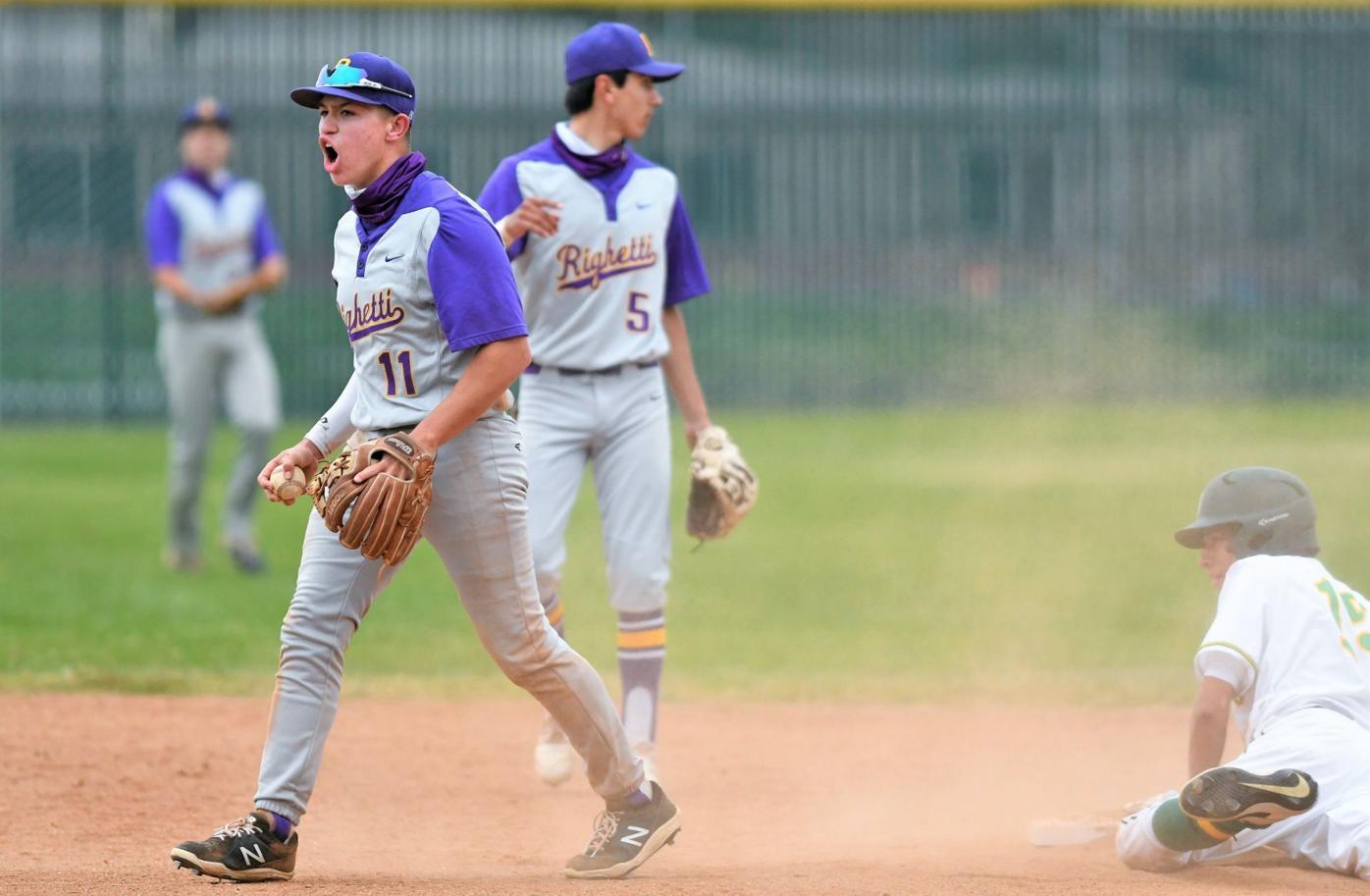 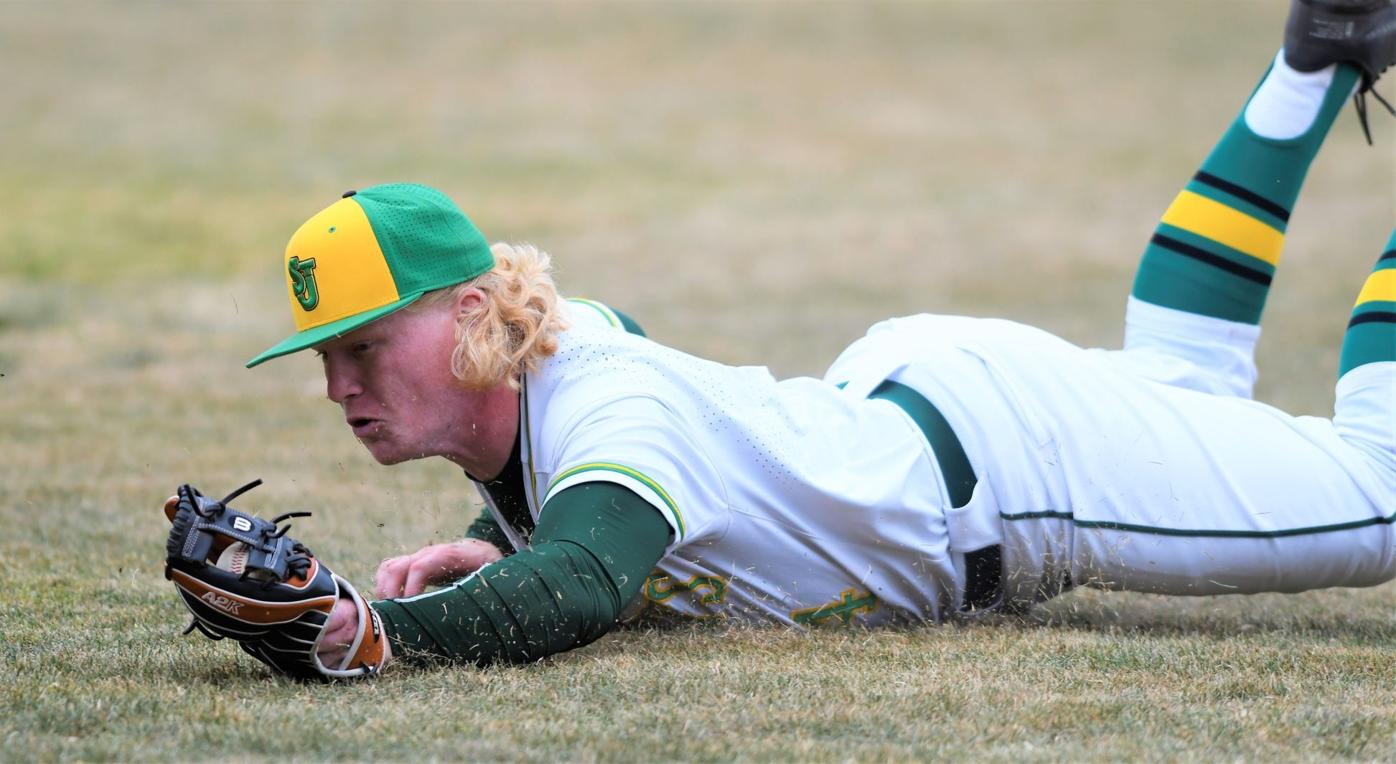 St. Joseph pitcher Noah Skarda completes a diving catch in the first inning of Wednesday's game against Righetti. Skarda got up and threw to first for a double play. 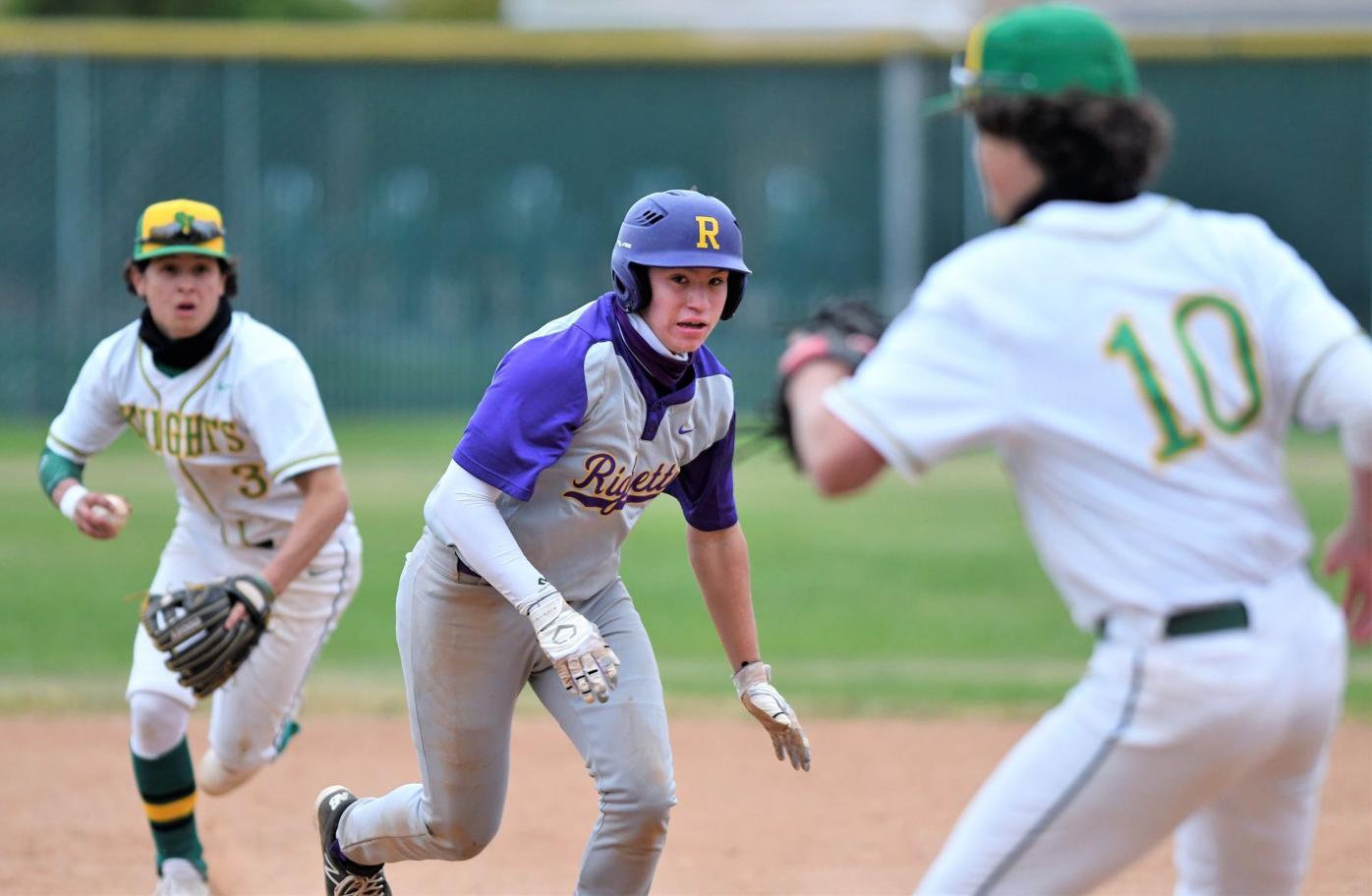 Righetti's Gavin Long is caught in a run down between Jeremy Camarena and Ethan Mansfield during Wednesday's Mountain League game. The Warriors won 4-1, their seventh straight victory. 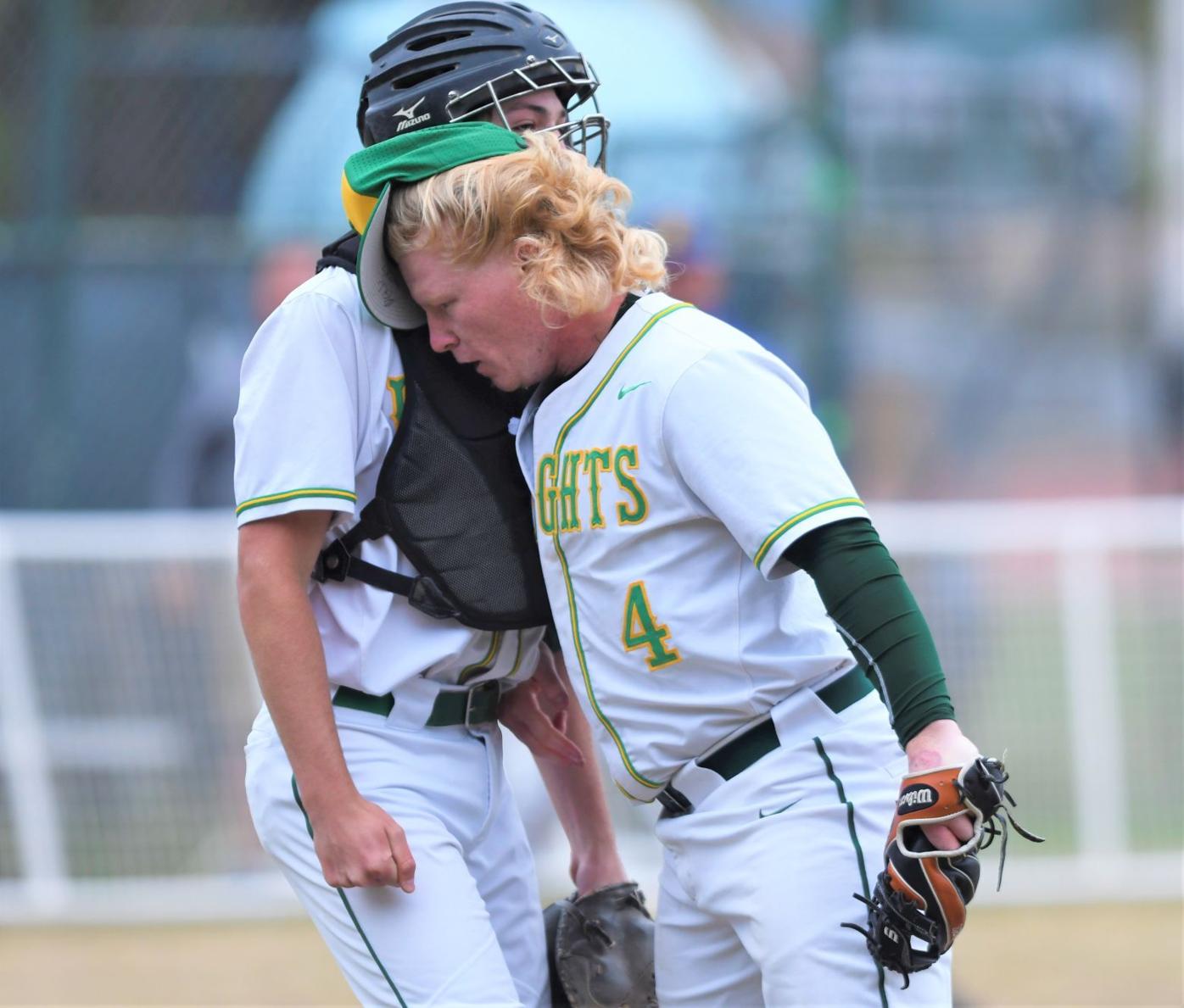 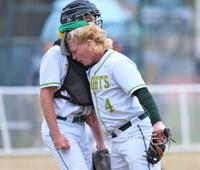 St. Joseph pitcher Noah Skarda reacts after making a diving catch in the first inning of Wednesday's game against Righetti. Skarda got up and threw to first for a double play after making the catch.

St. Joseph pitcher Noah Skarda completes a diving catch in the first inning of Wednesday's game against Righetti. Skarda got up and threw to first for a double play.

Righetti's Gavin Long is caught in a run down between Jeremy Camarena and Ethan Mansfield during Wednesday's Mountain League game. The Warriors won 4-1, their seventh straight victory.

St. Joseph pitcher Noah Skarda reacts after making a diving catch in the first inning of Wednesday's game against Righetti. Skarda got up and threw to first for a double play after making the catch.

The Warriors won their seventh straight game Wednesday, beating rival St. Joseph 4-1 to open up a three-game Mountain League series that wraps up with Saturday's doubleheader.

Righetti's defensive alignment, its pitching and timely hitting has the Warriors on a roll.

VOTE: Eight up for Player of the Week

They scored three times in the first inning, all with two outs, by putting the ball in play and forcing the St. Joseph defense to get outs.

Righetti starter Chris Miller made sure it held up. Miller threw another complete game, shutting out the Knights for six-plus innings. Wednesday was Miller's third complete game in five starts this spring. He's got a 1.45 ERA over 29 innings.

What's been working for him on the mound?

"I'd say my location," Miller said after he struck out four and issued just one walk. "Locating my fastball, which allows me to use my off-speed stuff. That's helped me. Also, trusting my defense."

"We've made some changes defensively, just guys switching positions," Tognazzini said. "We put Matt Rivas at short, Gavin (Long) at second. The guys just seem more comfortable out there. Plus, we're starting to get healthier. Guys are figuring out how to manage football and baseball. That's been a challenge."

Tognazzini says starting catcher Andrew Gonzalez is back. Gonzalez was the designated hitter Wednesday but will catch a weekend game after injuring his throwing hand earlier this spring.

"We've got a lot of options now and we're starting to get into a rhythm," Tognazzini said.

Brodie Miller started at catcher Wednesday and was solid, going 2-for-3 with a run while throwing out a baserunner in a key situation as St. Joseph had just scored in the bottom of the seventh and had runners at the corners.

Chris Miller also had a hit and drove in a run.

Skarda had some tough luck in the first inning. He made a dazzling double play on a bunt that was popped up, diving to catch the ball and then firing to first for a double play.

But after that, Long smoked a double to right and Brodie Miller hit a ball to center. The throw came to the infield and Miller broke for second, forcing a throw that sailed into the outfield and allowed Long to score.

The Knights then overthrew the ball from the outfield and Miller came around to score for a 2-0 lead.

Chris Miller then singled and went to third on another throwing error, allowing Gonzalez to reach base.

Miller scored on a wild pitch.

In the fifth inning, Long reached on an error and came around to score on a fielder's choice.

St. Joseph's lone run came on a Steven Pallan single that plated Brayden Blythe with one out in the seventh.

Tognazzini took a mound visit with runners on the corners and one out as his team held a 4-1 lead. Tognazzini told his defense to make sure to get the out at second, which it did with Brodie Miller throwing out Pallan trying to take second.

Cody Allen then lined out to end the game and strand a runner at third.

Blythe, Pallan and Sebastian Ramirez each had two hits, with Ramirez's line drive double the lone extra-base hit for the Knights. Skarda struck out three and walked just one.

The win offered some of the Righetti football players a little payback against St. Joseph, which beat Righetti in football in this odd spring season last Friday.

VOTE: Eight up for Player of the Week

Canley had been ripping through defenses just about all spring. Last week, though, he had to grind out the majority of the yards he gained on the ground against Santa Barbara, averaging about seven yards per carry. (He had been averaging over 11 yards per carry on the season).

On Friday, Canley also came up big in the clutch. He caught a screen pass from quarterback Cavin Ross to the field side, behind the line of scrimmage, trucked over two defenders five yards downfield, then raced past the rest of the defense for a 66-yard touchdown that sealed the game.

Ast threw a touchdown pass and also caught three touchdowns in the 67-0 win over Cabrillo. He's had a crazy season and coach Josh McClurg tweeted Tuesday that it's helped him land a preferred walk-on spot at Cal Poly.

Somehow his senior highlight tape is 10 minutes, though he only played five games. And it's good film.

Ast, already a two-time winner of the award this season, had 726 rushing yards and 11 touchdowns while also catching 18 passes for 338 yards and four more touchdowns in five games this spring.

It's great to see Nuñez and Pioneer Valley have some success this spring after a tough 2019. I had Friday's game all wrong as I predicted Santa Maria to win handily.

Pioneer Valley, though, came to play and blew out the Saints with Nuñez helping to lead the way, scoring a touchdown and rushing for 60 yards. The Panthers will close out their season against Atascadero on Friday.

Williams has had a great spring season but really put the finishing touches on a solid career with his performance Friday. He made the most athletic catch I've seen this spring, played shutdown corner and then recovered and returned a fumble 85 yards for the game-clinching score.

Williams should be a steal for UTEP and he showed why Friday.

It's been a lot of fun watching this guy play the last three years. He's such a physical runner and can always be counted on to carry the workload at running back. He's constantly chirping, sometimes more at his own teammates than the opponents.

Nepa's the heart and soul of the team when he steps on the field and he's a talented player. But another great thing about him is his drive. He rarely leaves the field. When a teammate had to leave the field Friday against St. Joe's, he shifted over and filled that vacancy on defense. When the player came back, he went and fills in for another at safety. He'll play some rover/linebacker, too, then carry the ball 20 times and also handle kick returns.

It wasn't enough to beat St. Joseph on Friday, but Nepa definitely deserves a spot on this list, just about every week.

The biggest revelation of the 2022 class this spring may be Puga. He's been nearly unstoppable. Puga has 757 yards and 11 rushing touchdowns in five games. (How did Paso Robles hold him to 42?)

The junior has topped 100 yards in four of five games and has over 220 yards in two contests.

Pu'a's probably been Nipomo's best player this spring, but he had his best offensive game in the rout of Atascadero on Friday.

The senior scored four times and topped 100 yards rushing for the only time this season. He finishes his five-game senior season with seven touchdowns.

Susank's been really good this spring and, though he's only a junior, appears to be a seasoned veteran and leader for this program.

The Royals needed him to close out the spring with a win and a winning record and Susank delivered with another big game against Morro Bay.

Be sure to vote on all three of our sites