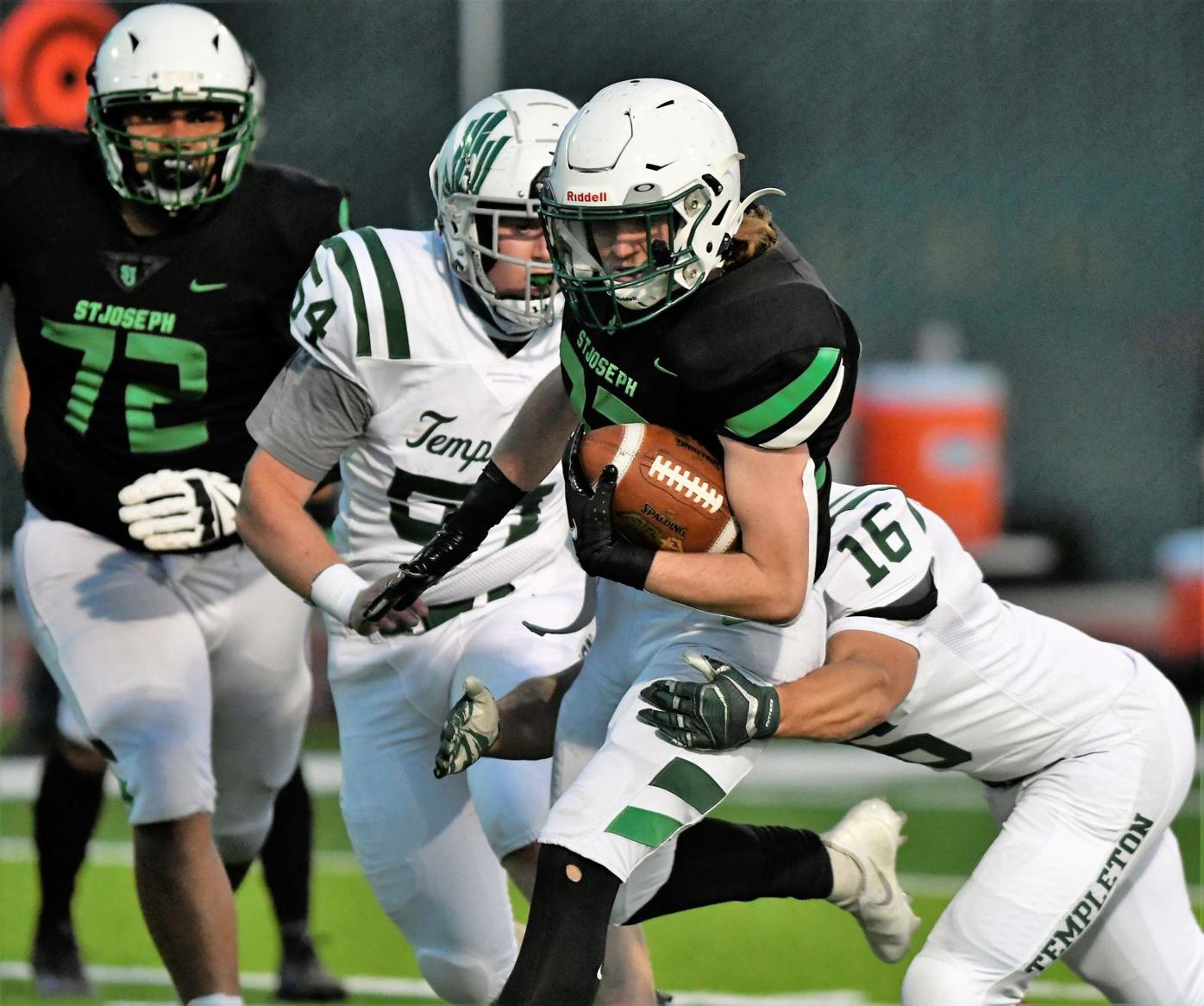 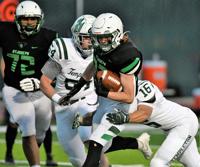 St. Joseph's Brett Burress carries the ball during last week's game against Templeton. The Knights beat the Eagles 38-0, improving to 4-0 on the season. They'll travel to Righetti Friday night for the annual Battle for the Shield. 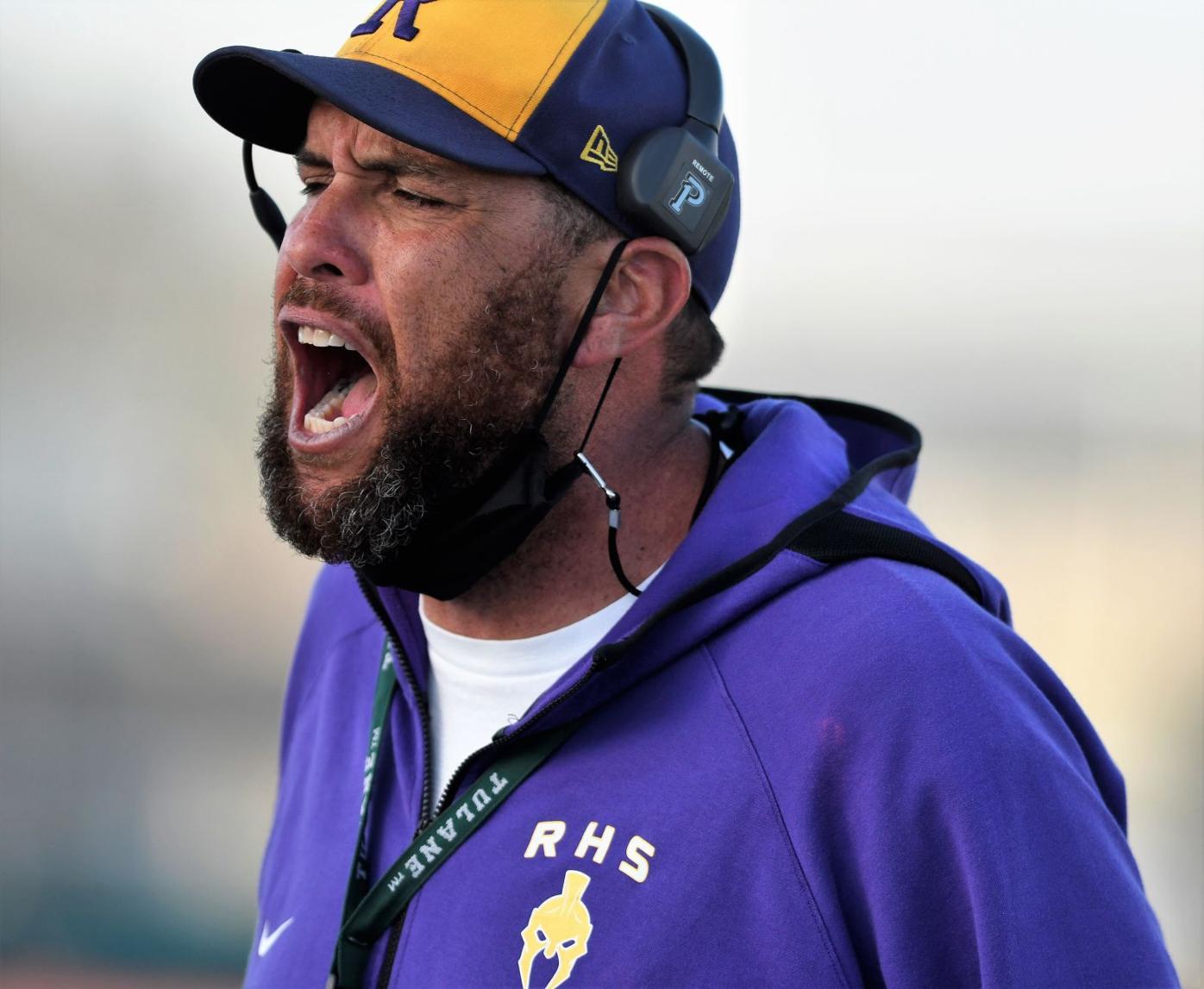 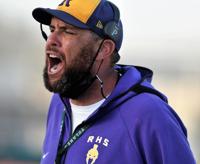 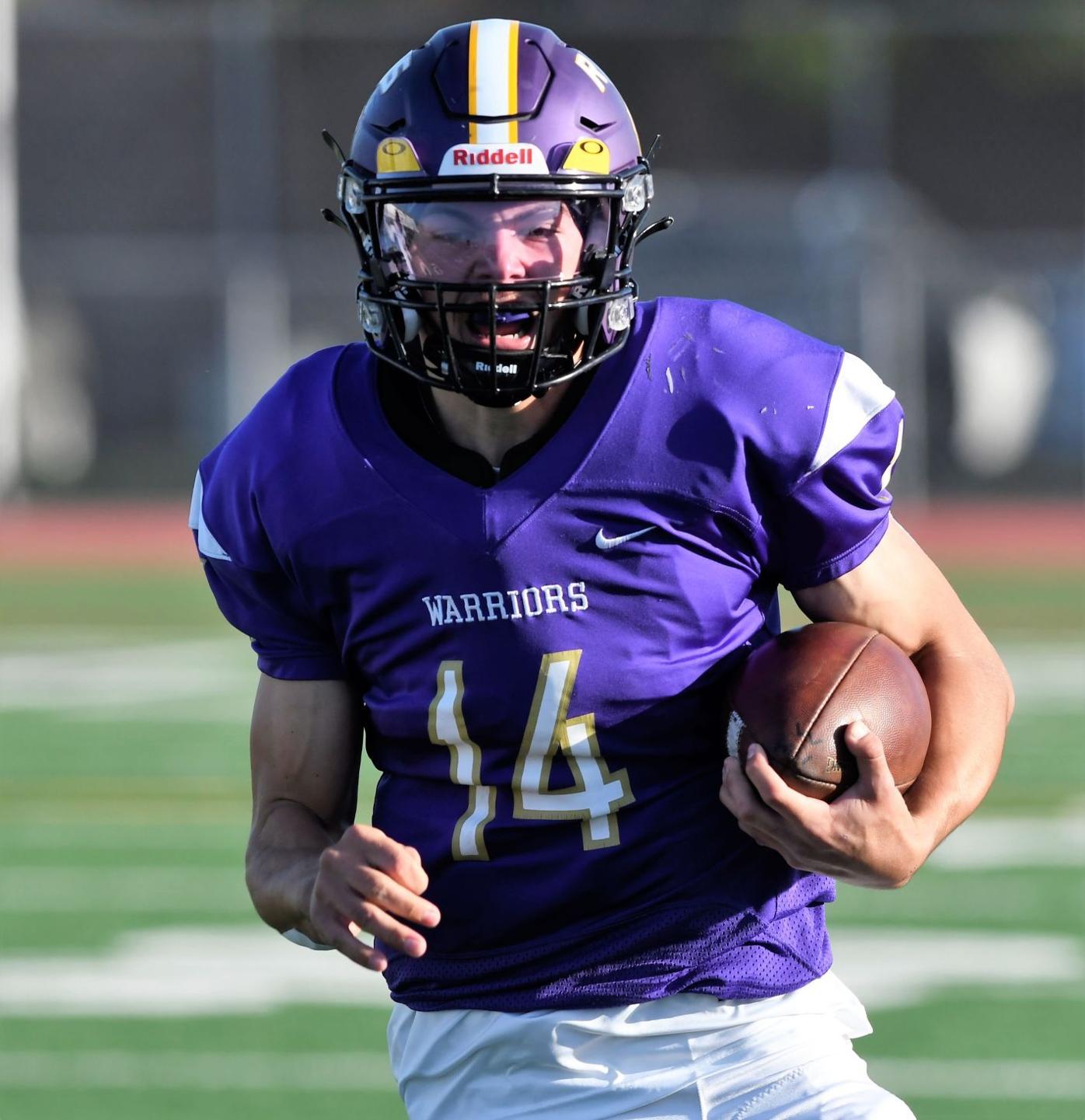 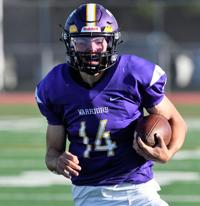 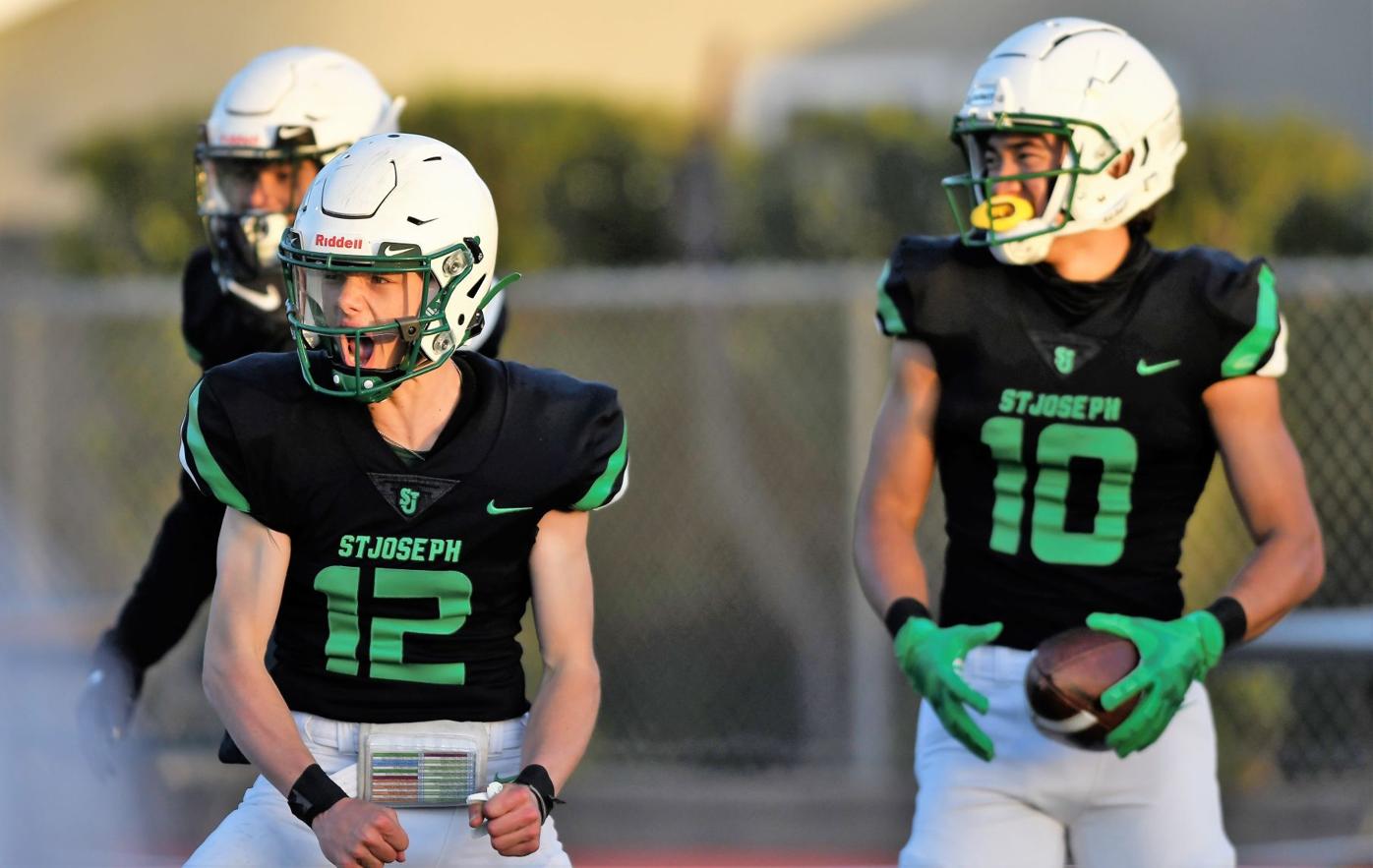 St. Joseph's Caden Cuccia (12) celebrates after throwing a touchdown pass to Travis Royal (10) during last week's game against Templeton. The Knights beat the Eagles 38-0, improving to 4-0 on the season.

St. Joseph's Brett Burress carries the ball during last week's game against Templeton. The Knights beat the Eagles 38-0, improving to 4-0 on the season. They'll travel to Righetti Friday night for the annual Battle for the Shield.

St. Joseph's Caden Cuccia (12) celebrates after throwing a touchdown pass to Travis Royal (10) during last week's game against Templeton. The Knights beat the Eagles 38-0, improving to 4-0 on the season.

The Battle for the Shield is finally here.

Both teams are unbeaten, though St. Joseph has played two more games than Righetti and is 4-0.

The Knights have outscored their four opponents 168-20, allowing just five points per game.

After week off, Braves and Conqs set to wrap up football seasons Friday

Righetti, meanwhile, hasn't been a slouch, beating Paso Robles 34-7 in its opener before cruising past San Luis Obispo 28-0 last Friday.

Friday night's game will be streamed live on santamariatimes.com/live.

Here, we'll break down some of the matchups.

Righetti’s Kidasi Nepa said he’s grateful to be playing at all this spring after the pandemic nearly wiped out his senior season. #santamariatimes pic.twitter.com/V4SEgQGvKo

When Righetti has the ball

Righetti has to excel in every phase of the game to beat a St. Joseph team that has steam-rolled all four opponents it's faced. Being able to run the ball effectively, though, is where it all starts for the Warriors.

The ground game is the biggest weapon in the Warriors' arsenal. If they can get something going early against a St. Joseph defense that hasn't given an inch this year, then the Warriors should start to believe they can beat this St. Joseph juggernaut.

Righetti coach Tony Payne credits St. Joseph coach Pepe Villaseñor and defensive coach Jim Chvala for finding ways to make the Righetti offense uncomfortable in years past. Payne, though, says he's learned quite a bit from his previous two games against the Knights.

"Shout out to Pepe and Jim Chvala, those guys are tape fiends and they prepare really, really well," Payne said at practice this week. "They take away things I want to do and, in the past, I've tried to force it. I feel like I've learned a lot and we have plenty in our playbook that will work. As long as we don't force the things that aren't working, we've got the dudes and the game-plan to get it done. It's all just got to come together."

Righetti employs the double-wing offense that features three running backs on the field at the same time. Kidasi Nepa, Chris Miller and Adrian Ruffino are all capable of carrying the ball at any moment. Nepa is the between-the-tackles back who typically gets the most carries. Miller is one of the wing-backs that can break off big plays, like his 75-yard touchdown against San Luis Obispo last week. Ruffino has the size and speed to do a little bit of both.

But the Warriors also have quarterback Joaquin Cuevas who can hit timely throws to Miller or Elias Martinez. Casey Daniels, a big receiving threat, is out with an injury.

St. Joseph senior Jayce Gamble is, perhaps, the top linebacker in the area and has been a handful for offenses to block this spring. St. Joseph also has size and length on the defensive line and shutdown corner Tyler Williams patrolling the perimeter. Senior running back Darien Langley also plays defensive back.

"It's a big game, sure, but it's just a normal game for us," Langley said of the Righetti match-up. "I'm going to cherish the moment and do what I can to help the team."

Williams says his team's linebackers are what sets the defense apart.

"I think it's the amount of discipline the linebackers have," Williams said. "Their pass-drops are impeccable. I feel like our whole defense runs around them. We definitely have some skill-players here and there, but our linebackers are definitely carrying our defense right now."

Max Stineman, a 6-foot-5, 300-pound tackle, also played some defensive tackle in the Knights' 38-0 win over Templeton last week and could pose some problems for the Righetti offensive line with his size and strength.

"We approach the game the same way we approach any game. There's no rivalry," Stineman said. "They're a team that's standing in our way. We just need to do us and we'll be good."

When St. Joseph has the ball

From his perspective, Payne says, the St. Joseph offense has transformed this year, relying on its offensive line to get its ground game going. Stineman, Makai Sat, Gage Mussell, Micah Pacheco and Aaron Guggia have all played well on the offensive line this spring.

"In the past, I've felt that they've leaned on their incredible skill-players, but this time around we're watching film specifically looking at guys on the line and where they're lining up," Payne said of St. Joseph. "That's crucial to their success."

How can the Righetti defense hope to stop this St. Joseph juggernaut?

"You've got to penetrate gaps and follow their guards -- they love to kick and pull," Payne said. "You can't be leaners, you've got to be penetrators. We've got guys who can get the job done. Our linebackers have to be tackling machines and (senior linebacker) Luke Guerrero is absolutely ready. He leads our team in tackles and he's ready for this game."

St. Joseph has employed seniors Langley and Brett Burress as running backs and the duo has sliced through every defense it's faced this spring. Langley has multiple touchdowns in each of the last three games, including a 68-yard sprint last week against Templeton.

The Knights will have freshman Caden Cuccia, who will make his third varsity start Friday, at quarterback. Cuccia has been impressive in his first two games, going 11-for-11 for 203 yards and a score against San Luis Obispo and 13-for-15 for 198 yards and another touchdown against Templeton.

Righetti juniors Miller and Martinez will be key in covering the Knights' receivers, including Williams, Noah Skarda, Takai Azizz and Travis Royal.

Payne says Miller is the one who leads the defense.

"He lines everybody up and gets everybody where they need to be, then he performs," Payne said of Miller. "Our entire defensive backfield is definitely one of our strengths this year. If we can keep their big boys from turning their shoulders parallel to the line of scrimmage, I think we'll stand a lot better chance."

Senior Matt Simms is a key defender on the Righetti line. Simms, at 6-foot-1, 190 pounds, has a good balance of size, speed and strength to disrupt offenses.

St. Joseph certainly enters this game as the favorite, but Righetti should provide some resistance. If Righetti can run the ball, keep the St. Joseph offense off the field and limit any turnovers, it greatly improves the Warriors' chances of winning this game. Though, if St. Joseph's defense continues to smother the opposition, while its offensive line allows Langley and Burress to slice up the defense and Cuccia to hit big throws down the field, St. Joseph will move to 5-0.

Kickoff is slated for 6 p.m. The game is not open to the general public, with only immediate family members of players and cheerleaders allowed to attend.