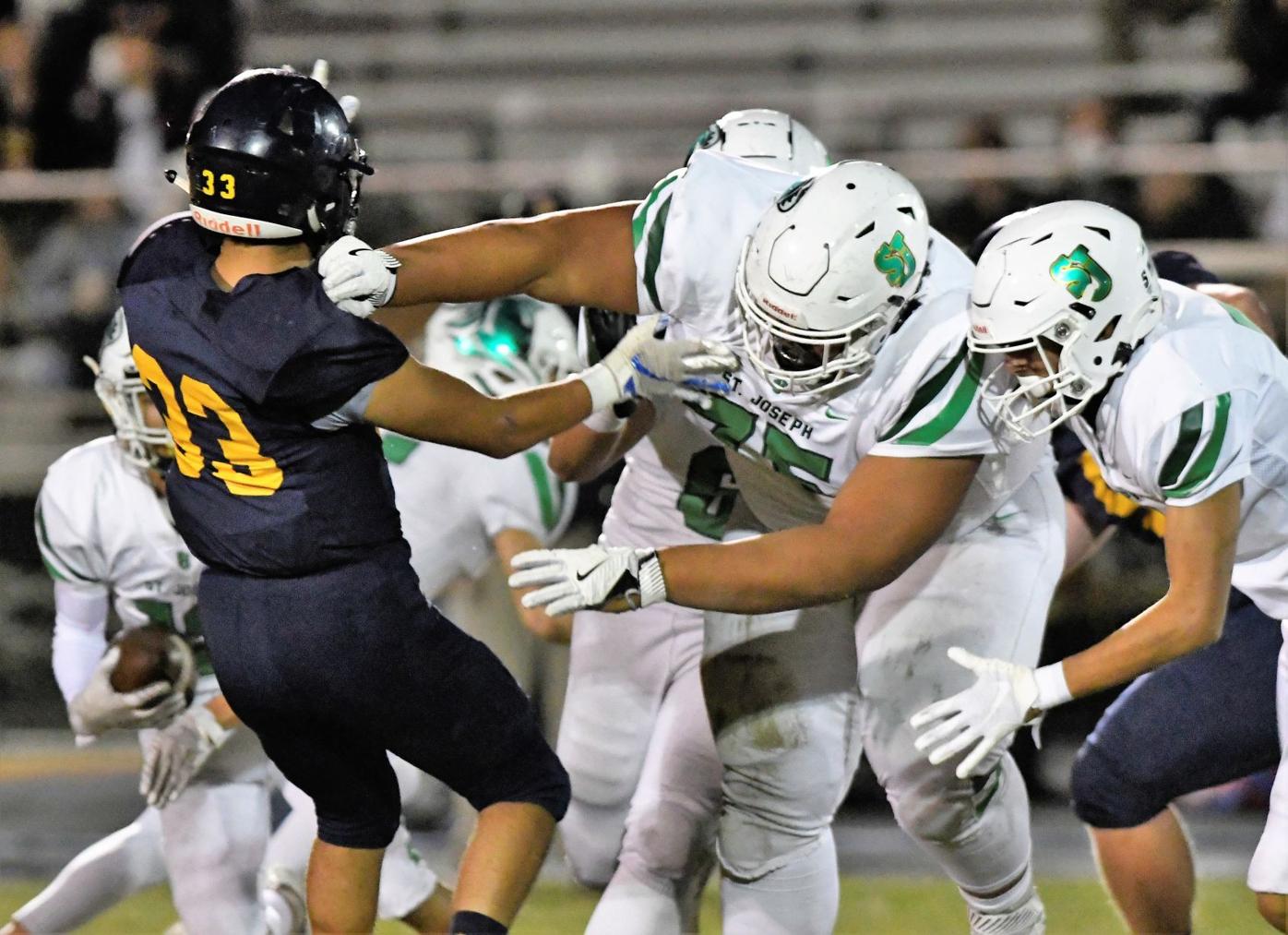 St. Joseph's Erwin Taomi throws a block during the Oct. 9 game against Arroyo Grande. The Knights won 39-21. The Eagles and Knights are two area teams wrestling for playoff position as the new postseason format is just weeks away from its debut. 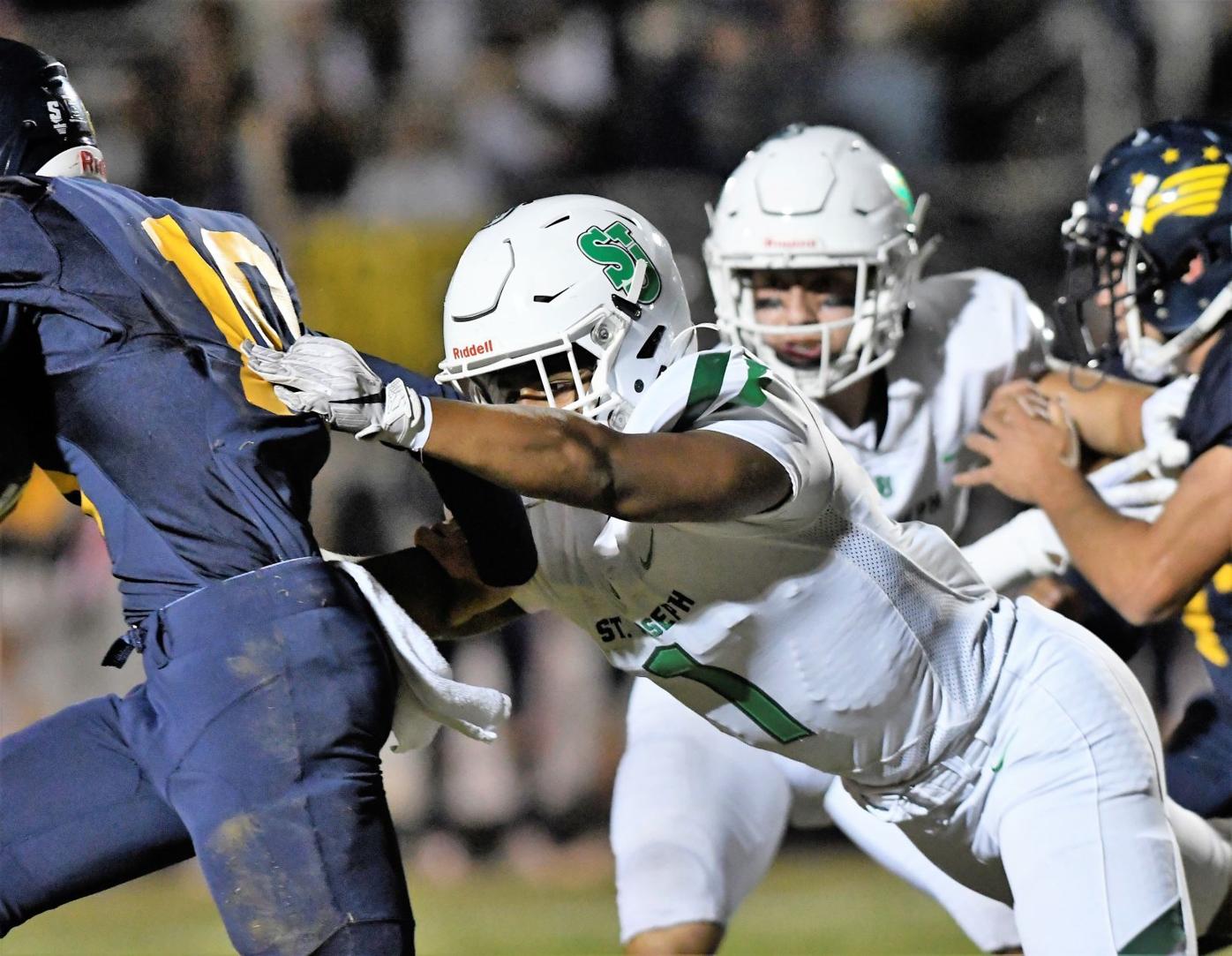 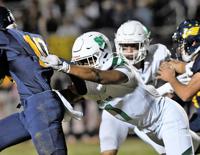 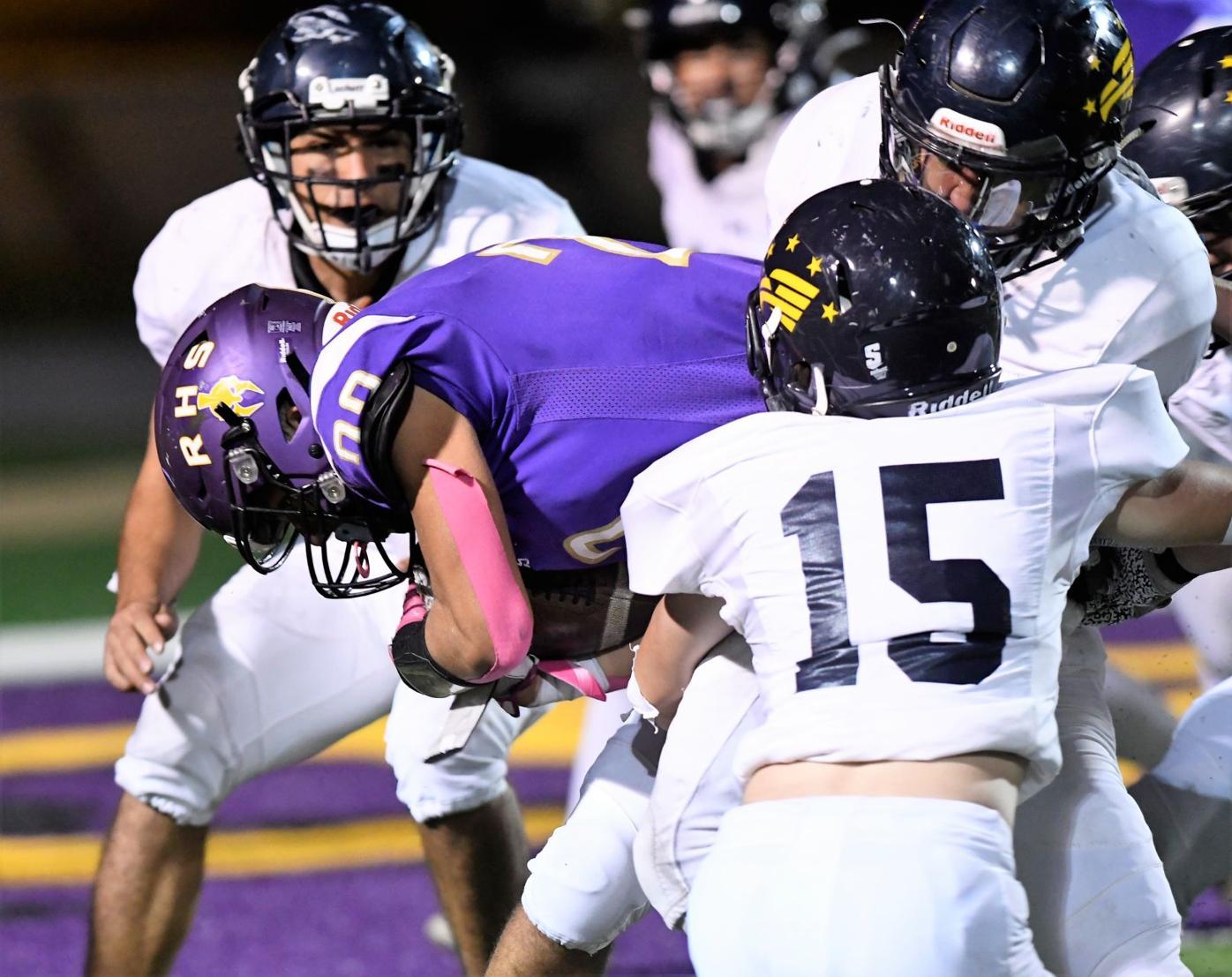 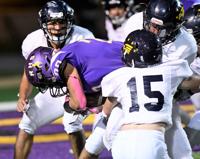 Righetti's Brian Monighetti carries the ball during the Mountain League game against Arroyo Grande on Oct. 15. The Warriors head to St. Joseph for Friday's game against the Knights.

St. Joseph's Erwin Taomi throws a block during the Oct. 9 game against Arroyo Grande. The Knights won 39-21. The Eagles and Knights are two area teams wrestling for playoff position as the new postseason format is just weeks away from its debut.

Righetti's Brian Monighetti carries the ball during the Mountain League game against Arroyo Grande on Oct. 15. The Warriors head to St. Joseph for Friday's game against the Knights.

High school football's regular season is about 80% over.

Still, so much has yet to be decided.

Teams still have league titles to play for and division placement for the playoffs is still up in the air.

Let's take a look at the league title and playoff pictures as most teams prep for their final two games.

VOTE: Scott, McClurg, Puga, Kopcho, Bagby among those up for Player of the Week

If teams want a playoff spot in the Central Section, they just need to win a few games.

The Central Section hopes to have six full divisions with a total of 88 teams. Those six brackets will be filled by using the CalPreps rankings once the regular season is complete.

What will that look like? Well, luckily, the CIF Central Section has been compiling weekly updates on divisional rankings.

No Central Coast Athletic Association teams are in Division 1 as of now. The highest ranked team in the CCAA? That would be Mission Prep at No. 18.

The Royals would be punished for their perfect 8-0 record as they'd be a middle-of-the-pack Division 2 team. Mission Prep is the No. 18 team in the section according to CalPreps' formula, earning them the No. 10 seed and a road game in Division 2. There will be eight teams in Division 1.

Frankly, the Knights would much rather be ranked No. 25. That's where Wasco currently is. If the Knights were dropped down just one spot in the rankings, they'd be the No. 1 seed in Division 3.

St. Joseph plays at Pioneer Valley (0-7, 0-3 Mountain League) in a league game Friday night. They close the regular season with the home game against rival Righetti on Oct. 29. Those are two games the Knights should win. Depending on how other teams ranked near them do, the Knights would likely stay in Division 2 if they win out.

If St. Joseph's only goal this season was the win a CIF title, it would behoove them to lose their last two games and drop down to Division 3.

Will that happen? No way, according to coach Pepe Villaseñor.

"At the end of the day, we're going to play the best we can, week in and week out, and we'll play the hand we are dealt," Villaseñor said when discussing this new playoff format in August, before the season started.

When asked if he was a fan of this system before the season, Villaseñor said, "No comment on that."

St. Joseph and Mission Prep are the only teams in the area in Division 2.

There are three CCAA teams in Division 3. Paso Robles is ranked No. 32 overall, putting the Bearcats in the middle of the division. Paso Robles (5-2, 3-0 Mountain) hosts Righetti (1-6, 1-2 Mountain) Friday night.

Paso Robles is the Mountain League leader, with wins over St. Joseph, Nipomo and Pioneer Valley.

Nipomo (6-2, 2-2 Mountain) is No. 38 and Arroyo Grande (5-3, 2-1) is No. 39. Arroyo Grande hosts Nipomo in a Mountain League game on Saturday morning. The Eagles then close out the regular season with a game against Paso Robles. Nipomo surely wouldn't mind falling to No. 41 to become the No. 1 seed in Division 4.

Saturday's game will be Nipomo's last of the regular season.

Teams can opt out of the postseason, but the Central Section is willing to accept most teams to fill out the brackets.

San Luis Obispo is in a good spot currently in the rankings. As the No. 58 team in the section, the Tigers are the No. 2 seed in Division 5.

Who's right behind SLO? That would be the Righetti Warriors (1-6, 1-2 Mountain), who find themselves in a decent playoff division. The Warriors have just one win, but have played a tough schedule, resulting in a ranking that puts them in a good position come playoff time. The Warriors, though, lost their starting quarterback, Braden Claborn, for the season to a torn ACL last week, hampering any hopes of a deep playoff run.

Santa Maria plays Morro Bay Friday night on the road before closing out the regular season at Templeton.

Remember, with most teams having two games to play, these rankings will surely change over the next two weeks. (For example, St. Joseph was the No. 3 team in Division 3 last week, before the cancellation win against Nipomo bumped the Knights up to Division 2).

The final brackets will be released Oct. 31.

This is the final time Lompoc, Cabrillo and Santa Ynez have to worry about the CIF Southern Section playoff format, which is a bit more complicated than the Central Section's format. Those three schools are moving to the Central Section for the 2022-23 school year.

The Southern Section will use a similar system to place the highest-ranking teams in the toughest divisions, though qualified teams will be placed in divisions at first.

The CIF-SS bluebook rule 3319.7 states that "seeding of all playoff brackets in each division will follow the final power rankings in that division, regardless of league affiliation or league finish."

For example, in the first round, the No. 1 seed, determined by the final power rankings for that division, will play No. 16 and the No. 2 seed will play No. 15, etc.

Round Table: Almaguer and Valencia named Athletes of the Week

Then there are at-large entries.

"Once Automatic Qualifiers have been placed into a division, any remaining spots will go to the highest ranked .500 teams in that grouping," the CIF-SS rulebook states. "If there are not enough .500 teams, then the highest rated sub .500 team(s), will be taken."

Santa Ynez is currently tied for second in the Pacific View League at 2-1, with games remaining against Channel Islands and San Marcos. Santa Ynez should win those games and earn a playoff spot.

Lompoc is currently 3-5 and 0-3 in the Channel League. With no shot at cracking the top three in the league, Lompoc's best chance at making the playoffs would be to beat Oxnard and Dos Pueblos in its final two games to get to .500 and hope for an at-large berth. Lompoc has played a tough schedule and has had a decent ranking for much of the season, meaning they may have a shot at an at-large berth.

Cabrillo is 0-8 on the season and has no chance at the playoffs.

VOTE: Scott, McClurg, Puga, Kopcho, Bagby among those up for Player of the Week

After losing a heartbreaker at Buena on Oct. 8, Santa Ynez rebounded with a dominant 23-7 win over Ventura last week. The Pirate defense was lights out and two players particularly stood out. Aidan Scott had 12 total tackles, two tackles-for-loss and two sacks for the Pirate defense.

Canyon McClurg locked down Ventura's top receiver, Tyler Woodworth, finishing the night with six tackles and four pass break-ups in the win. Woodworth finished the game with three catches for 39 yards, his lowest totals of the season. Woodworth was averaging 92 yards receiving coming into the game.

Makai Puga has been dynamic for Arroyo Grande all season and he had one of his best games of the year last Friday. The senior had 92 yards on the ground with two touchdowns, 78 more yards receiving with another score and also made 11 tackles while intercepting a pass to power the Eagles' 39-35 come-from-behind win over Righetti.

Koa Kopcho also stood out in the win. He caught a 20-yard pass that set up a short touchdown run for the game-winning score. He led the Eagles with 13 tackles and finished with two catches for 33 yards.

Koa Kopcho with the catch and run has AG inside the 1. 45 seconds left. Righetti leads 35-32 for now. pic.twitter.com/FfuBMrjyyA

Cooper Bagby had a gritty performance for Righetti in the loss to the Eagles. Bagby was a physical presence in the middle of the Warrior defense at strong safety. He intercepted a pass and laid down several hard hits to break up passes. He finished with six total tackles.

Cooper Bagby picks off an Arroyo Grande pass. Warriors inside the 25 after a Swanson run. pic.twitter.com/upClK4gkN9

Adan Rubalcava had another one of his trademark performances, leading Pioneer Valley in just about every offensive category in a tough 15-6 loss at Paso Robles. He had 160 yards from scrimmage and also made 15 total tackles.

Lompoc's offense has been trying to make up for its short-handed defense all season long and junior QB Cavin Ross has been doing his part. He topped 240 yards in the 51-26 loss at Oxnard Pacifica. The Braves will need another big game Friday as they try to stop their five-game skid against a tough Oxnard team.

Over in the 8-man realm, Orcutt Academy's Kyle Miller has had a strong senior season and it continued Saturday in a loss to Riverdale Christian on Saturday. Miller had 141 yards rushing and two touchdowns and made nine tackles on defense.