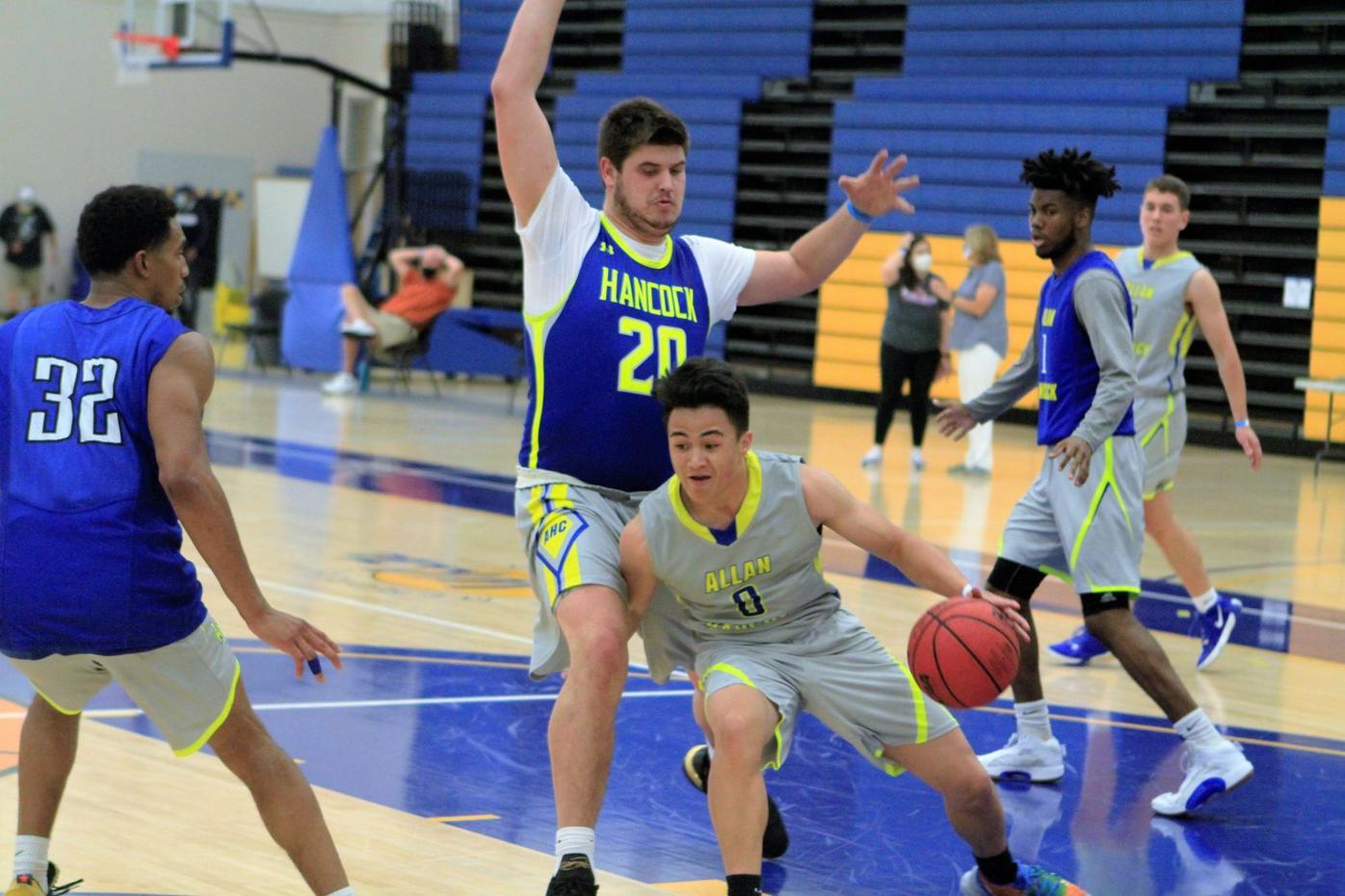 Hancock College guard Kainoa Keuma drives against center Kyler Warren during the pre-season scrimmage last week. The Bulldogs are slated to start their season Friday night with a game against Cuesta. 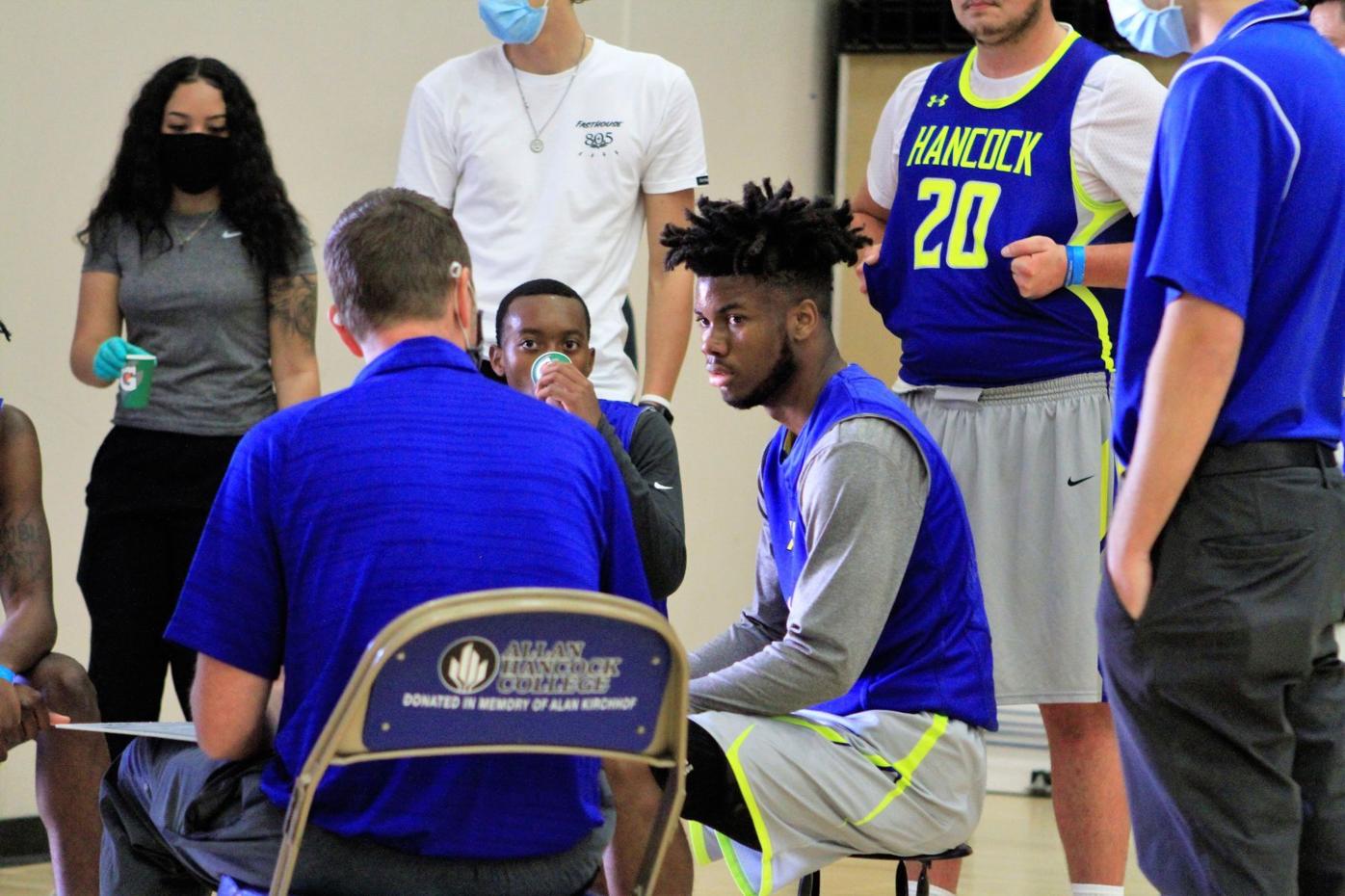 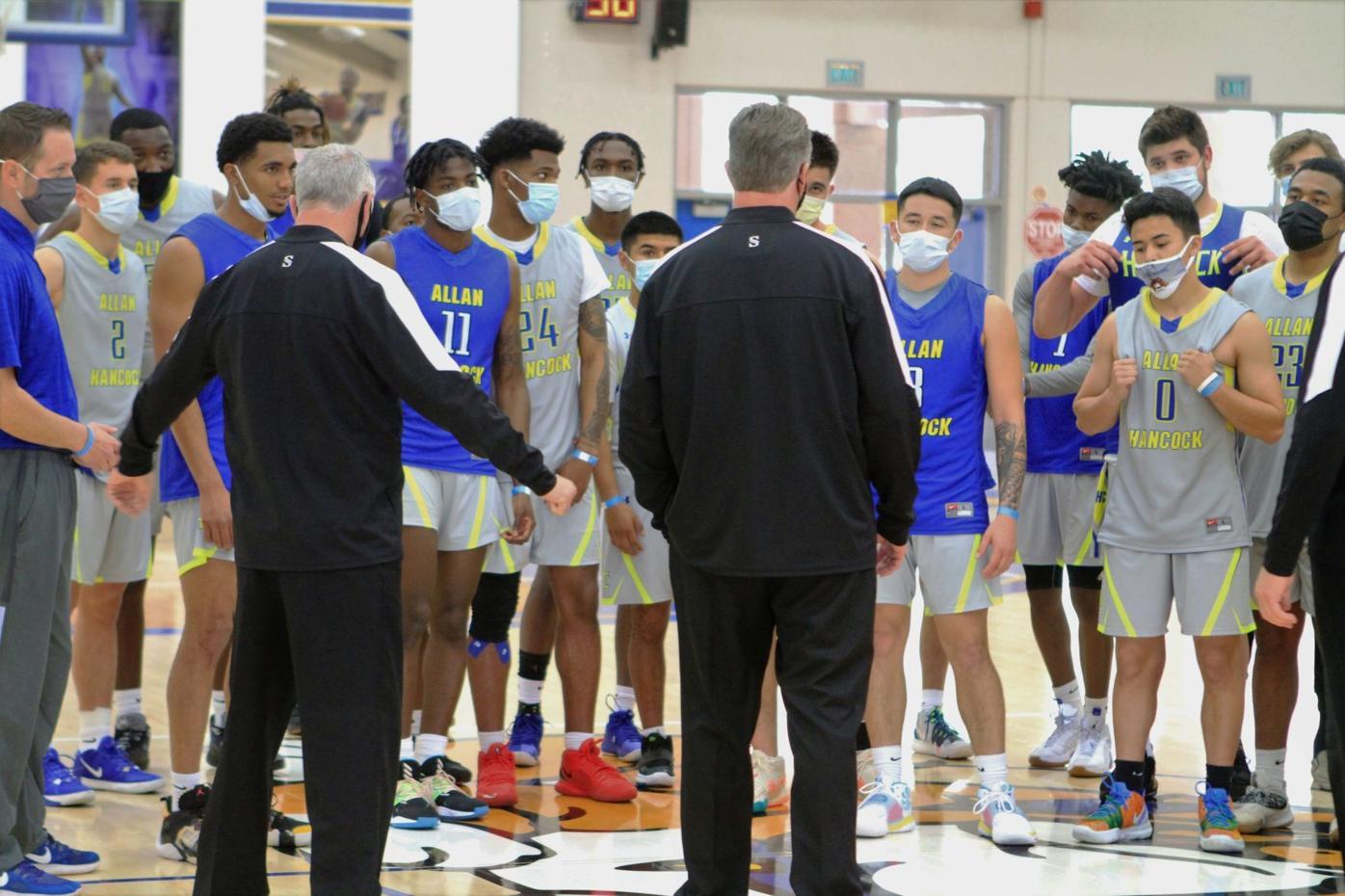 The Hancock College men's basketball team prepares for its scrimmage last Friday. The Bulldogs are slated to tip-off their season Friday at 5 p.m. 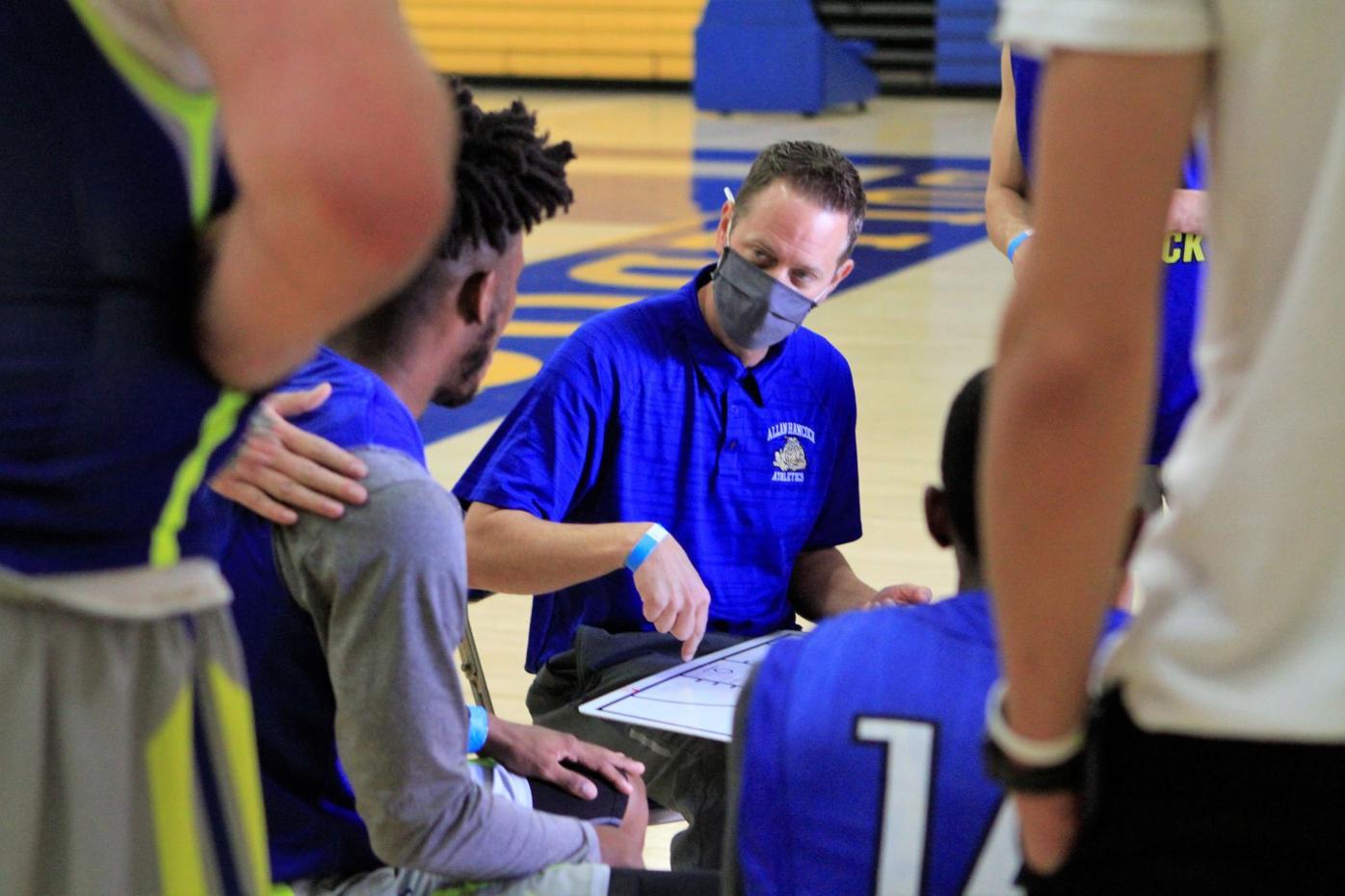 Hancock College guard Kainoa Keuma drives against center Kyler Warren during the pre-season scrimmage last week. The Bulldogs are slated to start their season Friday night with a game against Cuesta.

The Hancock College men's basketball team prepares for its scrimmage last Friday. The Bulldogs are slated to tip-off their season Friday at 5 p.m.

The 2021 spring edition of the Hancock College men's basketball team is quite an intriguing one.

There are, perhaps, two different versions of this team.

The Bulldogs are loaded with experienced players as coach Tyson Aye says he has six third-year sophomores on the team. They will also have feature some players who red-shirted or gray-shirted previously.

At the same time, though, Hancock has major holes to fill after top players transferred from last year's 23-7 squad.

Kyle Harding is now playing at Fresno State after leading Hancock in scoring as a freshman. Mayowa Akinsanya and Mike Mensah transferred to the University of Maryland Eastern Shore. Xavier Cooper is playing at Arizona Christian, Grant Johnson went to Holy Names University and DJ Searcy is at Fresno Pacific.

In all, Hancock loses its top six scorers from last year.

Aye, though, is just happy to see his guys have any type of season amidst a turbulent year marked by the coronavirus pandemic.

There is an experienced squad scheduled to return to the court Friday night with a season-opening game against Cuesta. Tip is slated for 6 p.m.

During the intra-squad scrimmage last week, Hancock showed a wide array of abilities on the floor. In Hancock's exciting, up-tempo offense, nearly every player on the floor proved capable of knocking down 3-point shots, with Dillon DePina, a 6-foot-3 freshman from Simi Valley, looking particularly well-suited. DePina hit five 3-pointers and finished with 15 points in the scrimmage.

The best four-year prospect on the team is likely Amari Stroud, a 6-foot-10 sophomore from Fresno's Sunnyside High School. Stroud spent time at Chico State before coming to Hancock. He scored 24 points in the scrimmage last week.

Also back for Hancock is Tasson Aubry-Thomas, a 6-foot-8, 255-pound sophomore. Aubry-Thomas got off to a strong start last season, averaging 11.5 points in four games before he missed the last three months of the season with an injury.

Bryce Craver, a 6-foot-3 guard, is the top returning scorer for the Bulldogs. He scored 174 points and made 10 starts in 24 games last season.

Former Pioneer Valley standout Nick Chapman will be tasked with a larger offensive role in 2021. Chapman came off the bench in 26 games last year, nocking down 39.2% of his 3-point shots. He averaged just over five points a game.

Orcutt Academy grad Mitch Carpenter is another one of those third-year sophomores. Carpenter, who played at Orcutt Academy, appeared in 24 games last season, going 22-for-35 from the field to score 48 points.

Obadiah Curtis, from Fresno's Edison High, is an intriguing prospect. He's a long 6-foot-4 guard. He was listed as a gray-shirt on the Hancock roster.

The Bulldogs won't have a full season to see what exactly this team is made of. They are currently set for a nine-game run. There is no Western State Conference play this year due to the coronavirus pandemic and no postseason.

The college basketball season typically tips off in November, but has been delayed and shrunk due to the coronavirus pandemic. After Friday night's game, the Bulldogs play Bakersfield at home at 6 p.m. on March 11, then travel to Bakersfield the following day for a 6 p.m. game.

Aye said last week's scrimmage was the first time the squad had a full 5-on-5 live-action game this year.

"I wasn't expecting them to execute to the highest level," Aye said. "But we talked about, 'Hey, your attitude better be great, your effort better be great and you better be there to pick up your teammates all day.' With that, I thought they did very well and I'm very proud of them. That's what our program is all about."

Aye said he'll have 11 players suit up this year and eight or nine of them are returners.

Aye said the team "will press and push the pace like we always do. We've got some big forwards and we want to get them the ball to draw some double-teams and play inside-out."

Hancock women return with more experience and depth in 2021

Most home Hancock athletic events will be streamed online at https://athletics.hancockcollege.edu/video/streaming. Spectators are barred from attending games for the foreseeable future, athletic director Kim Ensing said.

"Everyone can yell at their phones and TVs from home as much as they want," Aye said.