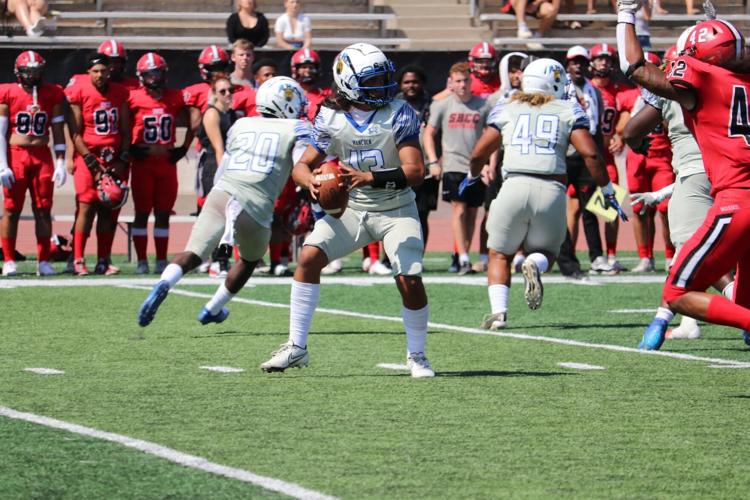 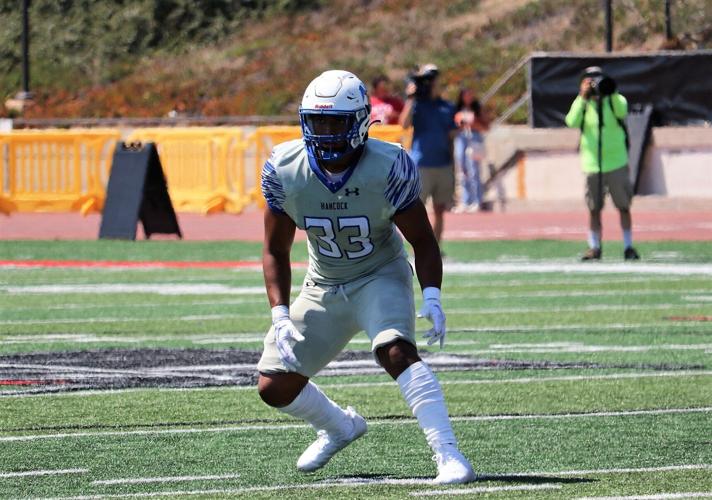 The Allan Hancock College football team opened week one with a road victory after battling through a rare heatwave at Santa Barbara City College. The 21-10 victory marks Hancock's fifth consecutive win over SBCC and moves the series record to 36-24-1 in favor of AHC.

Both teams were scoreless in the opening quarter, but the Bulldogs (1-0) entered the intermission with a 14-0 advantage after finding the end zone twice in the last five minutes of the second frame. The first scoring drive of the game, which spanned 71 yards, took just 54 seconds. Dior Kennedy started the effort with a 41-yard streak before JP Luketu buttoned things up with a 30-yard scamper through the goal line.

Syre' Lewis brought the offense back out on the field after an interception just four minutes later. Esekielu Storer connected with Jaleel Walker for a 63-yard touchdown pass on the first play of AHC's second scoring drive.

The Vaqueros (0-1) found their way onto the board in the third quarter after sending a 43-yard field goal attempt through the uprights, but the Bulldogs bounced back quickly with a 13-play drive that resulted in a touchdown. Hancock marched quickly down the field and landed in the red zone after a 42-yard reception by Walker and a slew of rushing attempts from Alex Sutton, Latrell Brown, Kennedy, and Luketu. Logan Mortensen stepped onto the field facing a 4th-and-14 situation after a pair of defensive stops by SBCC and a sack that resulted in a helmet mishap, forcing Storer to exit for one play. Mortensen connected with Raymond Paulo in the end zone on his first and only heave of the drive, which resulted in a 20-yard touchdown pass.

Santa Barbara used 11 plays in the final scoring drive for either side, ending the offensive effort with an 11-yard toss for a touchdown.

For the offense, Kennedy led the ground game with 83 yards while Luketu tacked on 75. Walker led the receiving corps with 105 yards on two catches and one touchdown. Storer went 4-for-13 on pass completions for a total of 123 yards through the air.

Ray Seabury was a perfect 3-for-3 on extra point attempts and totaled 228 yards off the tee, while Cody Hall punted for 195 yards on six attempts.

The Bulldogs had a balanced defensive effort with Jesse Garza, Devin Guggia and Paulo each recording six tackles. Ronald Fuselier, Andrew Lauritzen and Jordan Fields followed with five tackles apiece while AJ Masunu registered four. Hancock's defense came up with three interceptions on the day, led by a 45-yard snag from Sydney Jefferies, while Lewis and Guggia each secured one. Abraham Montero and Dylan Spiess were each credited with one sack on the day, combining for a loss of 15 yards

• This was the 61st time that Allan Hancock and Santa Barbara have faced off, dating back to their first pairing in 1956

• The Bulldogs have now won five consecutive games against SBCC, including 7 of their last 11 matchups

The Bulldogs are set to host San Bernardino Valley College in the home opener on Saturday at 2 p.m.. Tickets can be purchased online at ahcbulldogs.com/ticketing. As a reminder, cash will not be accepted at the gate and the full description of ticketing procedures can be found online.