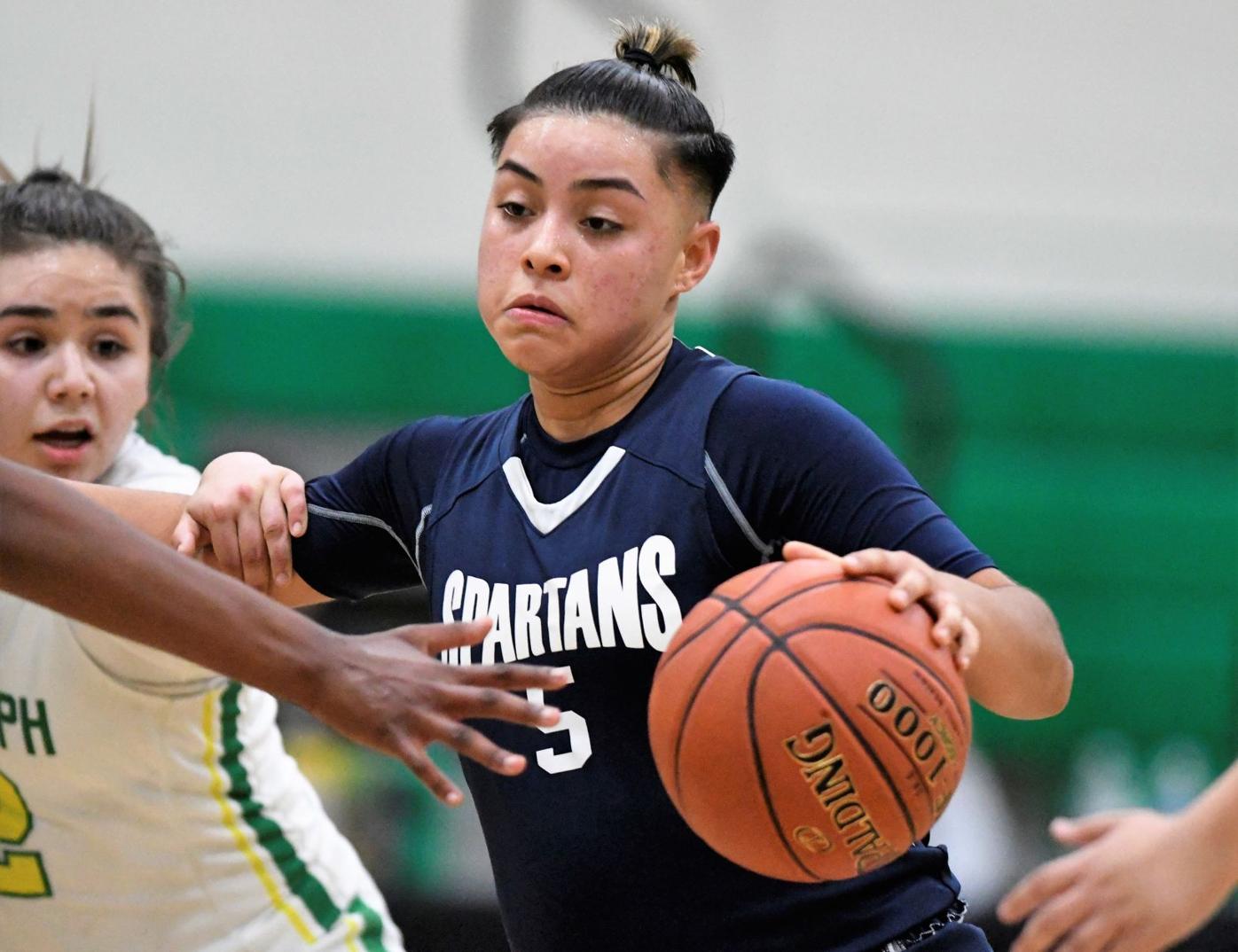 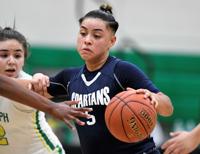 Orcutt Academy's Giselle Calderon was named the Ocean League MVP and the All-Area Defensive Player of the Year last season. The Spartans are off to a 5-1 start and Calderon is a nominee for Athlete of the Week. 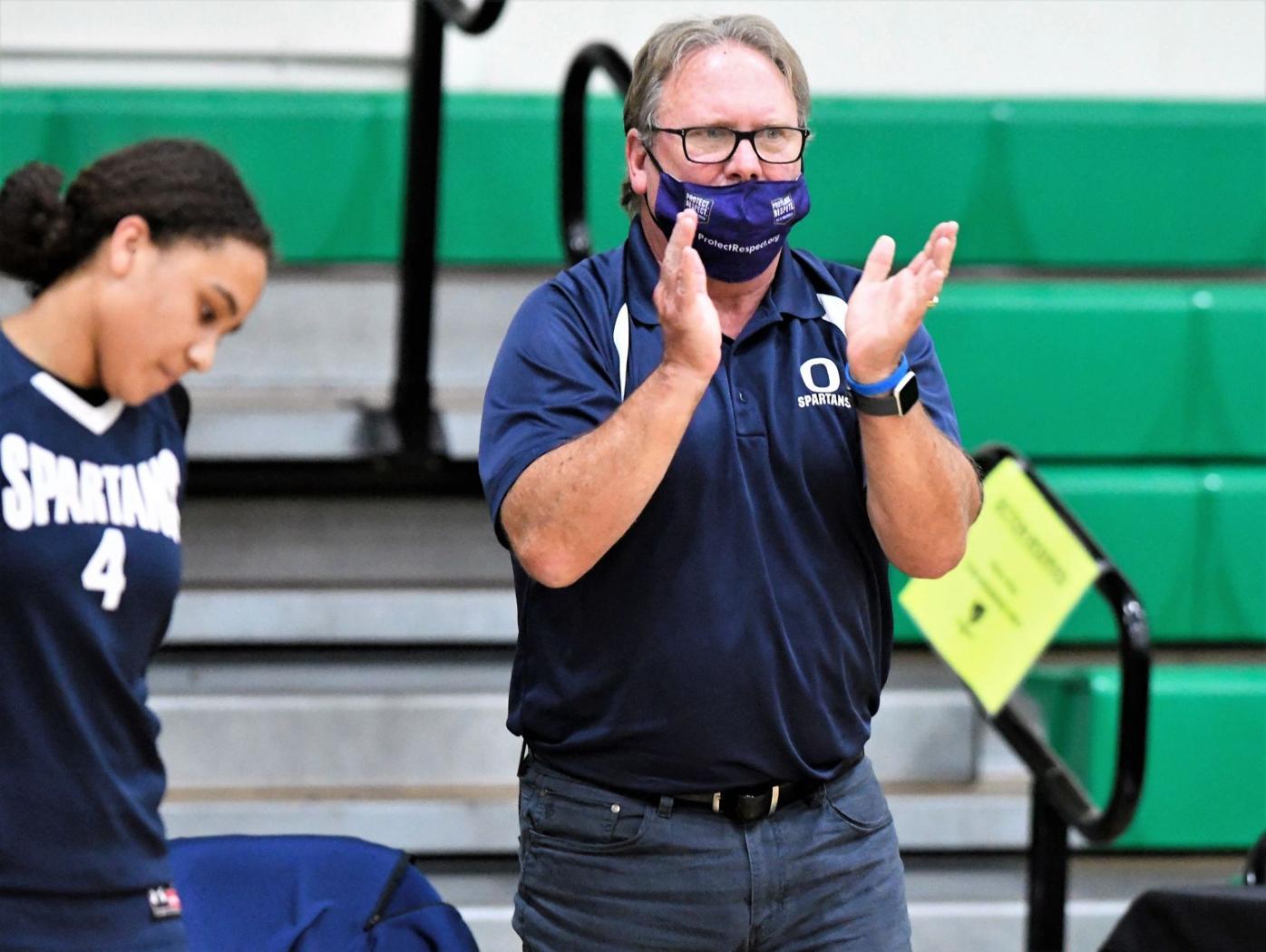 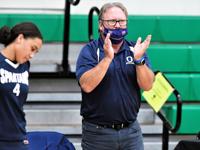 Orcutt Academy's Tom Robb was named the All-Area Coach of the Year last season after his team went 24-5. The Spartans are off to a 3-1 start this year and now play in the tougher Mountain League. 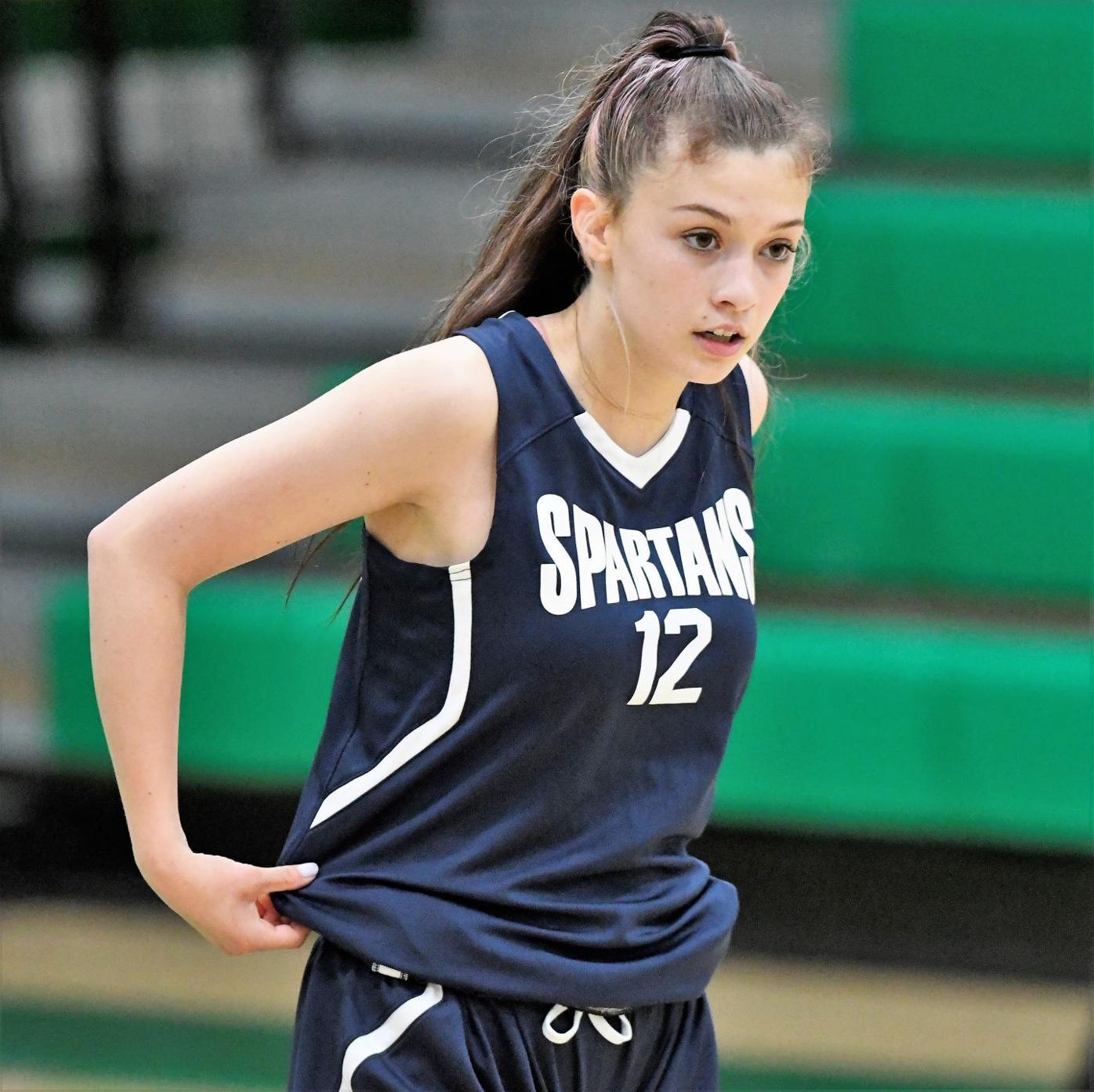 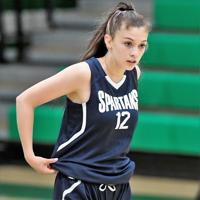 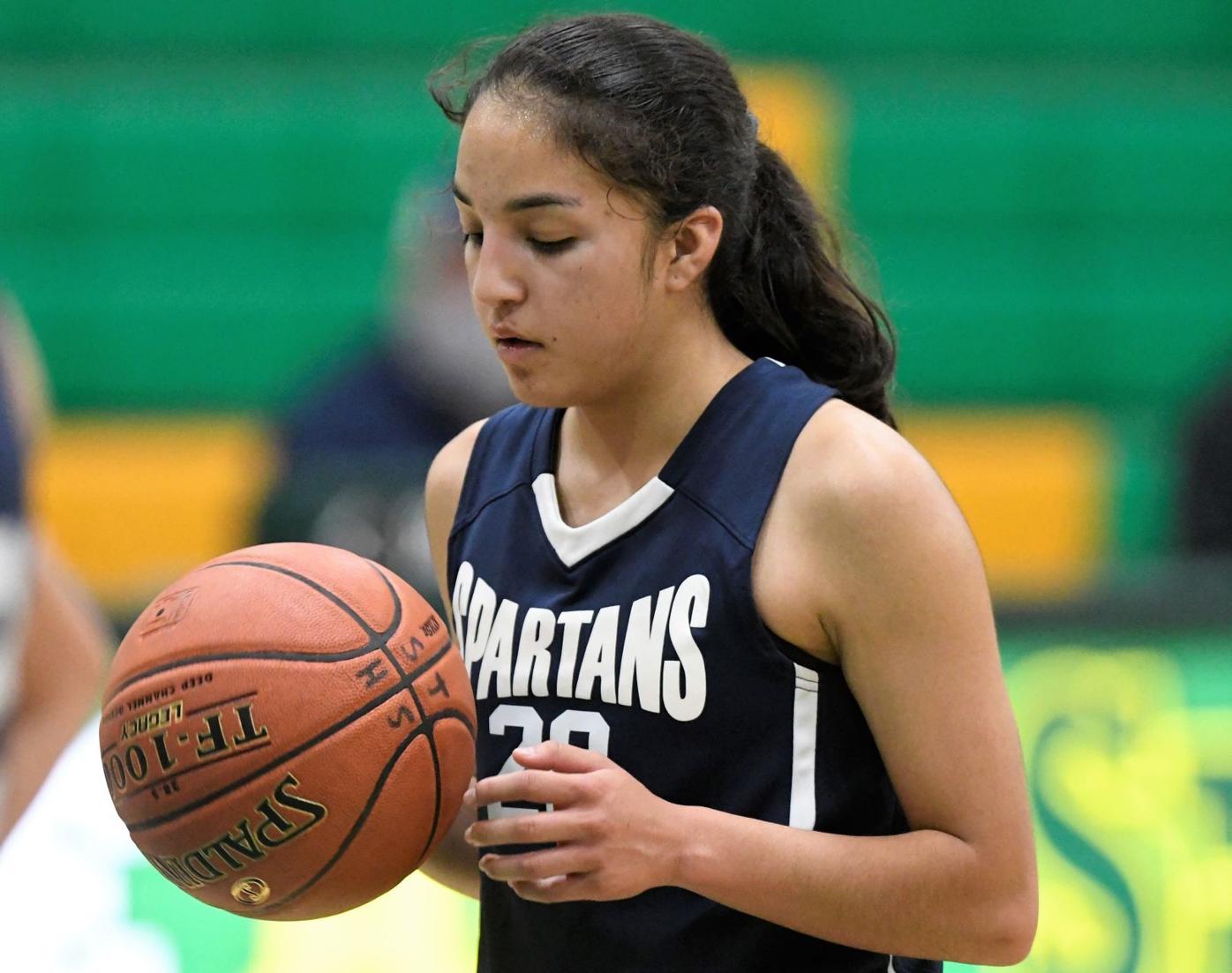 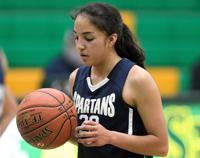 Orcutt Academy's Giselle Calderon was named the Ocean League MVP and the All-Area Defensive Player of the Year last season. The Spartans are off to a 5-1 start and Calderon is a nominee for Athlete of the Week.

Orcutt Academy's Tom Robb was named the All-Area Coach of the Year last season after his team went 24-5. The Spartans are off to a 3-1 start this year and now play in the tougher Mountain League.

The Orcutt Academy girls basketball team had slowly been building toward something.

Coach Tom Robb, who took over the team for the 2016-17 season, had quietly raised the team's win total in each of his first few seasons, going from five wins in his first year to 20 wins in his third.

Then came the 2019-20 season where the Spartans took yet another leap. Under Robb's coaching and with a deep, talented core group, the Spartans went 24-5 overall and won the program's first league title with a 10-0 run through the Ocean League.

They made the CIF Central Section Division 4 semifinals, only to be stopped by the eventual champion, Caruthers.

The Spartans have gone from league pushover, to scrappy underdog, but now, they are no longer the overlooked team that somehow beats expectations.

The Spartans are out to prove that they're a legitimate powerhouse in the making. They'll have plenty of opportunities to show if they can hang with the area's top programs.

"Absolutely," Robb said when ask if the Spartans' confidence is on a different plane this season. "We've been together for awhile. We have added a couple new people but they've caught on quickly. We're definitely confident."

The Spartans are already off to a strong start. They split their season-opening series against Nipomo, another rising program, then swept St. Joseph last week, handing the Knights their first two losses of the season.

The team features a bevy of talented players with plenty of experience. Giselle Calderon is now a junior. She was named the Ocean League MVP for the 2019-20 season and was voted the Times' All-Area Defensive Player of the Year.

"We still have the same goals, the same vision," Calderon said. "Our plan is to go far in CIF and try to take that. Our game has switched from going down more often — because we used to have height — to more guard oriented play. And we're more aggressive."

The Spartans are loaded with players who can complement Calderon or lead the team on their own when needed.

There's Devyn Kendrick, an inside presence who can score and rebound. Chyanna Medina-Tell, a Pioneer Valley transfer, may be the best scorer on the team. Erynn Padhal can shoot and score in a variety of ways while also providing defense. Diaminsol Malicdem may be the team's best shooter.

"I would have to say all the girls have taken that next step," Robb said. "Diaminsol has really stepped up. We put a lot of pressure on her. She didn't get as much playing time as the other girls (last year). Now we have Devyn, who's taken a leadership role and is taking on more offense as well."

All five of those players are averaging at least 7.3 points per game.

The team's success is usually based on its defense. The Spartans press heavily. In a win against St. Joseph last Thursday, they came up with 26 steals. They average about 18 steals a game as a team.

"We're going game-by-game to determine what we're doing (defensively)," Robb said. "When we played Nipomo, we didn't press we just got back into a zone. We're looking at it game-by-game. We're not the tallest team, but we're probably the fastest."

The Spartans are slated to host Mission Prep on Thursday in a Mountain League game at Lakeview Junior High. Mission Prep has yet to play a game this season after its opening series against Righetti was postponed due to COVID-19 issues within the Mission Prep program.

"Moving up to the Mountain League is pretty tough for us," Robb said after the Spartans beat St. Joseph 53-44 on April 23. "But, hey, we'll take on anybody at anytime. I think we'll do well and we should be right in the middle of the pack."

Robb says his goal is to finish within the top three in the Mountain League. Righetti is a strong favorite to win the league title again this year. It appears second place is wide open, with Orcutt Academy, Nipomo and Arroyo Grande definitely in the mix.

The Spartans won four games the year before Robb arrived. They then won five games in Robb's first season, improving to 10-13 in his second. They went 20-8 and 8-4 in the Ocean League in Robb's third season before going 24-5 last year, winning an unbeaten league title.

The junior post player had a big week, namely the second game of the back-to-back against San Luis Obispo.

Slover is having a stellar season, but she really showed out in a 66-64 overtime win over Nipomo on Thursday, April 22. She had 31 points to lead the Titans, including a 3-point shot in the final moments of regulation to force overtime.

The Titans then lost to Arroyo Grande on Friday when Slover had 14 points. She had 45 points and 14 rebounds in two games, adding four assists and two steals last week. She's averaging 20.5 points and 7.8 rebounds.

Orcutt Academy used a team effort in its girls basketball sweep of St. Joseph, but Malicdem had the most consistent outings.

She had 26 points and nine steals in the two wins over St. Joseph.

There are several players putting up eye-popping stats on the hardwood, but Solorio's numbers are among the best.

She's been dominant as Santa Maria has raced out to a 4-0 start in the Ocean League. She had 31 points and 13 rebounds in a win over Pioneer Valley on Friday.

Solorio had 53 points and 27 rebounds in two wins over the Panthers last week.

Muñoz has been doing it all for the Knights and last week was no exception.

In the 19-4 win over Pioneer Valley, Muñoz went 2-for-4 with three runs, three RBIs and a home run.

In a 10-4 win over the Panthers, Muñoz went 2-for-4 with three more RBIs and a double. She also pitched and threw a complete game, striking out five with five hits and three earned runs.

In a 12-2 win over the Panthers, she went 1-for-4 with three RBIs and earned the win in that, going five innings and allowing one hit.

Vote For Athlete of the Week (VOTE on ALL THREE SITES)

Righetti swept a three-game set against rival St. Joseph and it was a solid all-around performance for the Warriors, but junior infielder Gavin Long was solid throughout.

Long went 5-for-11 with four runs, two RBIs and a double in the three games. The Warriors enter the week on a nine-game win streak.

Rivera had an up-and-down week, but finished strong with 42 points in the final two games of the week.

Daniels, a football standout who is one of the top track and field athletes in the area, had a big meet on Saturday.

He was part of the 4x100 relay that took first place and then won the long jump and the triple jump, finishing second in the 100-meter dash behind football teammate Sheldon Canley, Jr.

Heredia went 3-for-4 with a run in the loss to Santa Barbara on April 21. He then threw a complete game two-hitter in the Titans' 5-0 win over Cabrillo on April 23.

Gonzales, a Cabrillo High grad, threw a no-hitter against Cuesta on Saturday, leaving the Cougars hitless for all nine innings. He struck out seven while walking two.

Gonzales has a 1.12 ERA in 11 innings pitched this year. His no-hitter on Saturday was the sixth in school history and the first in 18 years.

Coaches and athletic directors can submit Athlete of the Week nominees to jbailey@santamariatimes.com by Monday night every week.

Vote For Athlete of the Week (VOTE on ALL THREE SITES)