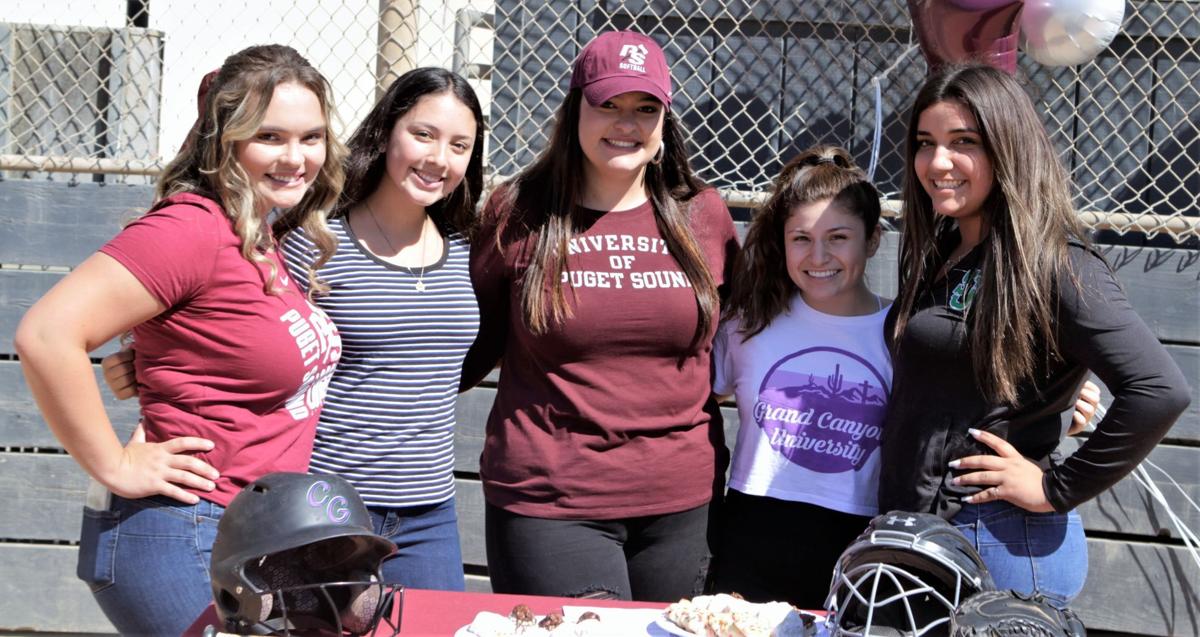 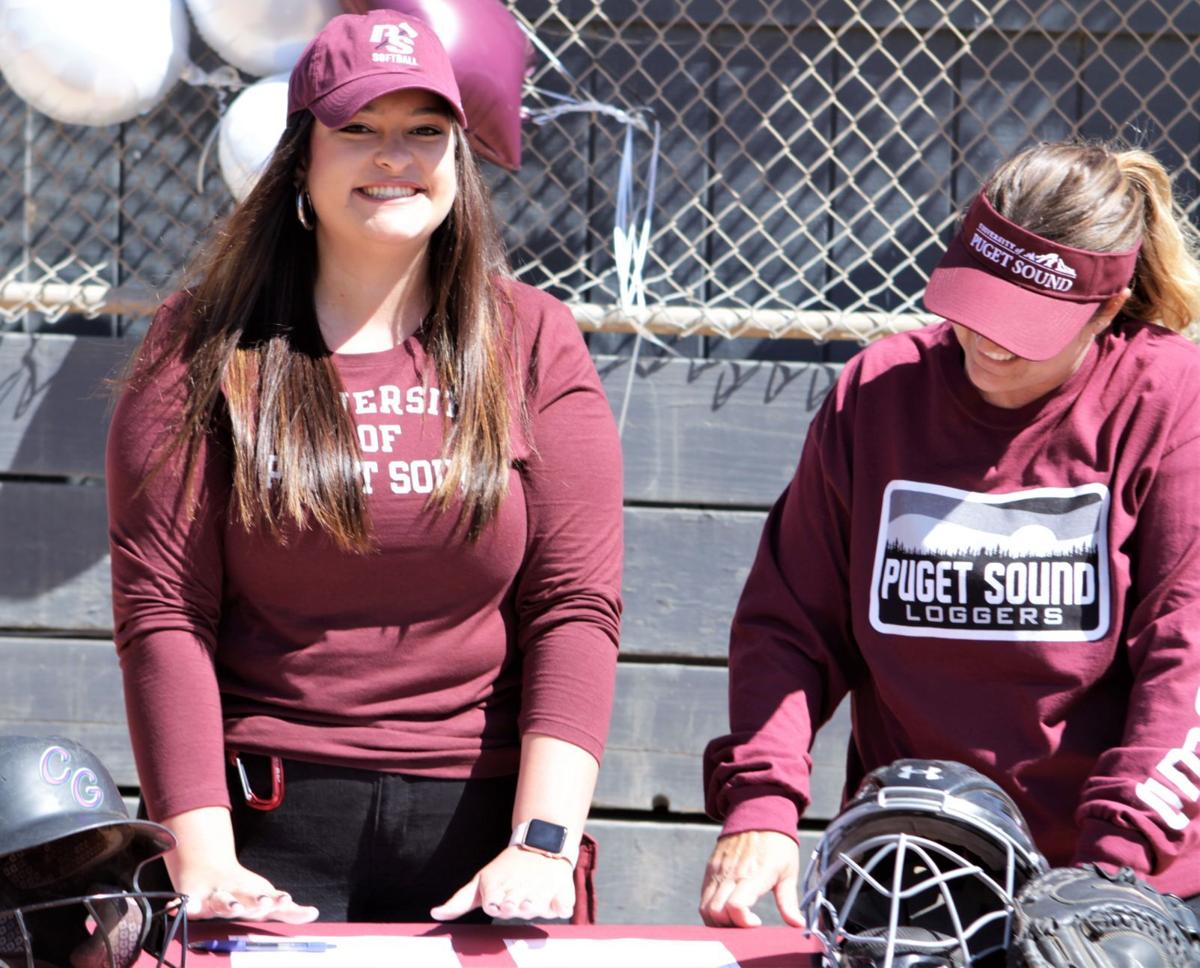 St. Joseph High graduate Zayda Altheide, left, reacts after signing to play softball at the University of Puget Sound on Wednesday. Her club softball coach, Sheila McGuire, is to her left. 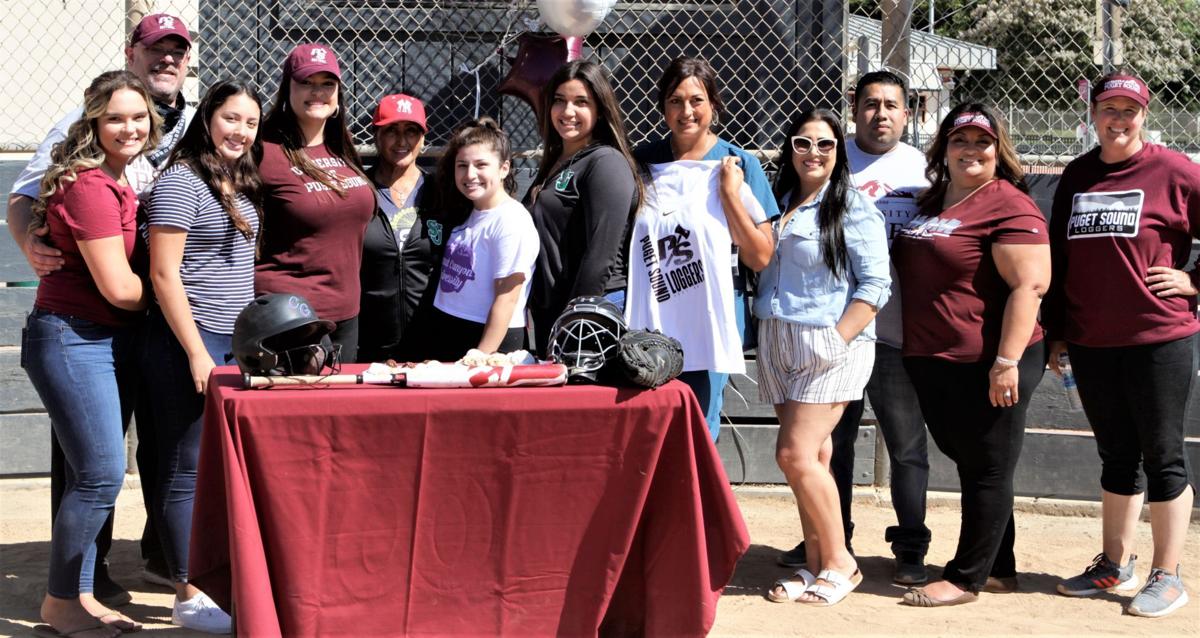 St. Joseph High graduate Zayda Altheide, fourth from left, poses for a photo with friends and family members after she signed to play softball at the University of Puget Sound on Wednesday.

It certainly won't make up for the last six months, but Zayda Altheide finally got a bit of normalcy on Wednesday.

Altheide and her family met up with a few former teammates and coaches at Hagerman Field then. The small gathering formed to celebrate Altheide's decision to attend the University of Puget Sound to continue her softball career in Washington.

After months of cancellations, Altheide was finally able to celebrate a bit. She certainly deserved it.

Her final season of an impressive high school career was canceled in March amid the coronavirus pandemic. School dances and graduation were canceled as well.

Altheide was set on calling it a career after high school. She had planned on attending Ole Miss to study nursing. But once it was determined the school would be offering only online instruction, Altheide decided to switch things up.

Bailey: College football is likely canceled this year. Will the NFL follow suit?

There are foundational differences among the two and, even as the college football season is almost certainly getting canceled, that does not mean there won't be NFL football this fall.

Her club coach, Sheila McGuire, tipped her on an opening with the Puget Sound softball team in Tacoma, Washington. Altheide inquired and found what appeared to be a good fit. She committed with the school and signed on Wednesday at the small ceremony at Hagerman to play catcher with the Loggers.

"I was really set on Ole Miss. I wanted the big football team and the academics all in one," Altheide said. "I was set. Then they told me they were going to go remote -- all online. I'm not a really big technology person, I didn't really jive with it but I just thought I'd deal with it. But then this offer for softball came.

"This would be my way of still having that college experience. We'd still be remote for now, but I'll have contact with the players and be part of a family, the softball sisters that will be there by my side."

The people have spoken: Nipomo's Nick Kimball voted Player of the Decade after edging Mike McCoy in wild finale

That winner is Nick Kimball. The former Nipomo High standout has been voted the Player of the Decade.

Altheide is planning on leaving for Puget Sound on Aug. 26 and school would start with remote learning, though softball players will be training in Washington.

Earlier this year, Altheide was named one of 22 CIF Central Section Scholar Athlete winners. She carried a 4.15 GPA at St. Joseph.

"I remember when we were told we wouldn't have a traditional graduation, and it made me sad," Altheide said. "I worked all these four years for that one moment and we wouldn't get that one moment. There were a lot of days where I was really sad, but my family was there and they picked me up.

"The last couple weeks have been fun trying to figure out what to do with summer with my friends. I'm happy and content with everything that is in front of me."

Though it's been 3 1/2 years since his passing, there are still signs of Ryan Teixeira's life all over the Central Coast.

“I also received a few other scholarships to go to Tiffin,” including a 2020 President Scholarship, worth $13,000, because of her academic marks at Santa Maria, said Baez.

Tuitele wrote that he worked late five to six nights a week, living pretty much a subsistence existence, “However, by the grace of God, I had just enough to pay off my college tuition and housing rent for two years straight,” Tuitele wrote.

They both became members of the CIF Fall All-Century Team. Kaufman was selected for his 1990 football season at Lompoc High School. Hasay was tabbed for her 2008 cross country season at Mission Prep.

From the Vault: Eddie Johnson starred as a Saint and a Ute

Here's what legendary coach Barney Eames had to say about Johnson as a youngster in 1982: "There's no doubt about it, Eddie's got a lot of potential," Eames told then Times sports writer Joe Dana. "He's definitely a dimension above the average high school back."

Cal Poly did not play any football games in 1918 due to the flu epidemic and in 1930 because of a polio epidemic, according to the school. The Mustangs also did not play any games in 1943 and 1944 due to World War II. In 2001, Cal Poly's game at Saint Mary's was postponed because of the events of 9/11. It was made up at the end of the regular season.

St. Joseph High graduate Zayda Altheide, left, reacts after signing to play softball at the University of Puget Sound on Wednesday. Her club softball coach, Sheila McGuire, is to her left.

St. Joseph High graduate Zayda Altheide, fourth from left, poses for a photo with friends and family members after she signed to play softball at the University of Puget Sound on Wednesday.