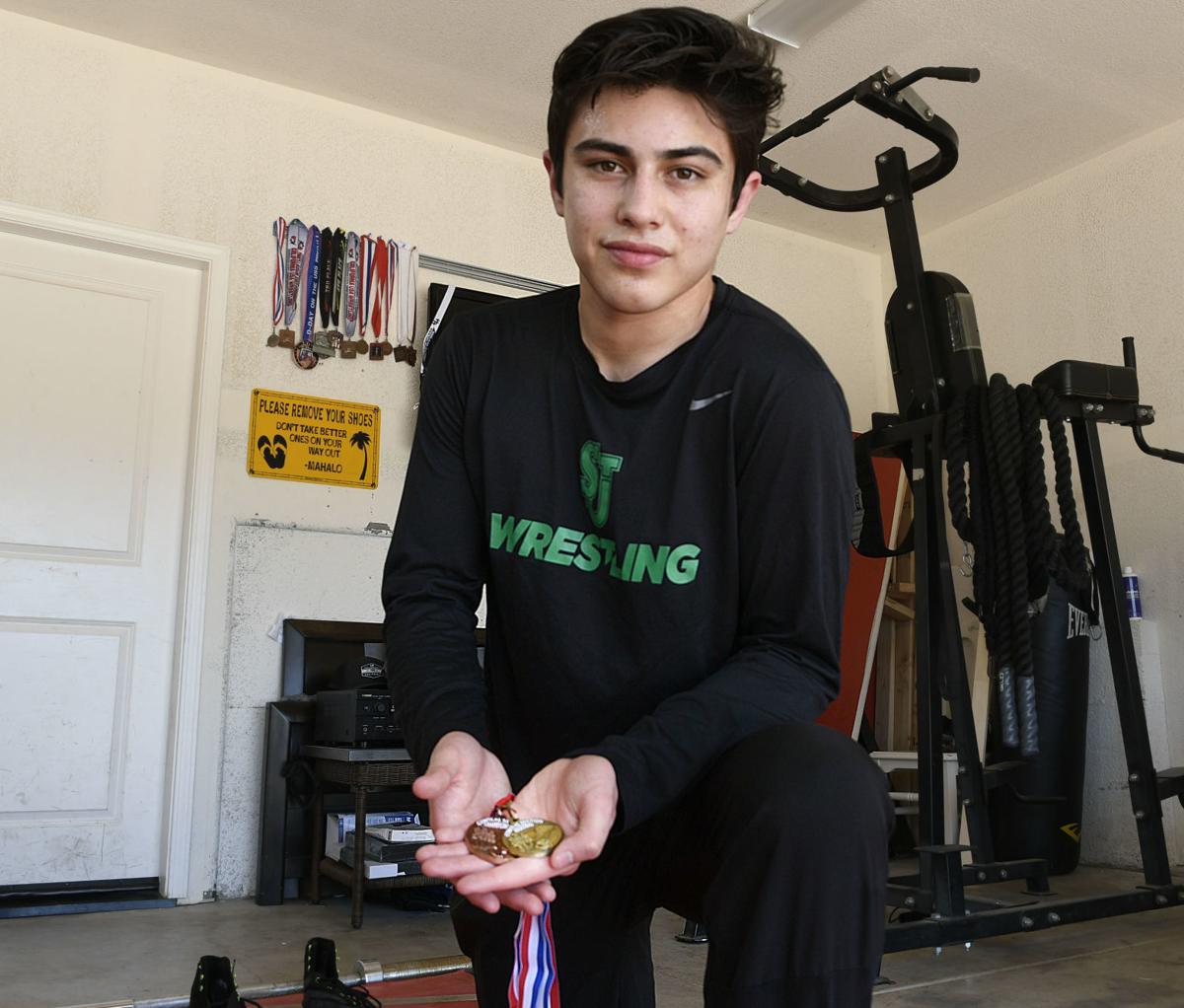 St. Joseph senior wrestler Richard Gonzalez holds two of the medals he won this season, with the Division 5 title at 147 pounds and qualifying for the state tournament. He is only the second SJ wrestler to qualify for the state tourney. Gonzalez is the Knights' Athlete of the Year nominee for the Northern Santa Barbara County Athletic Round Table. 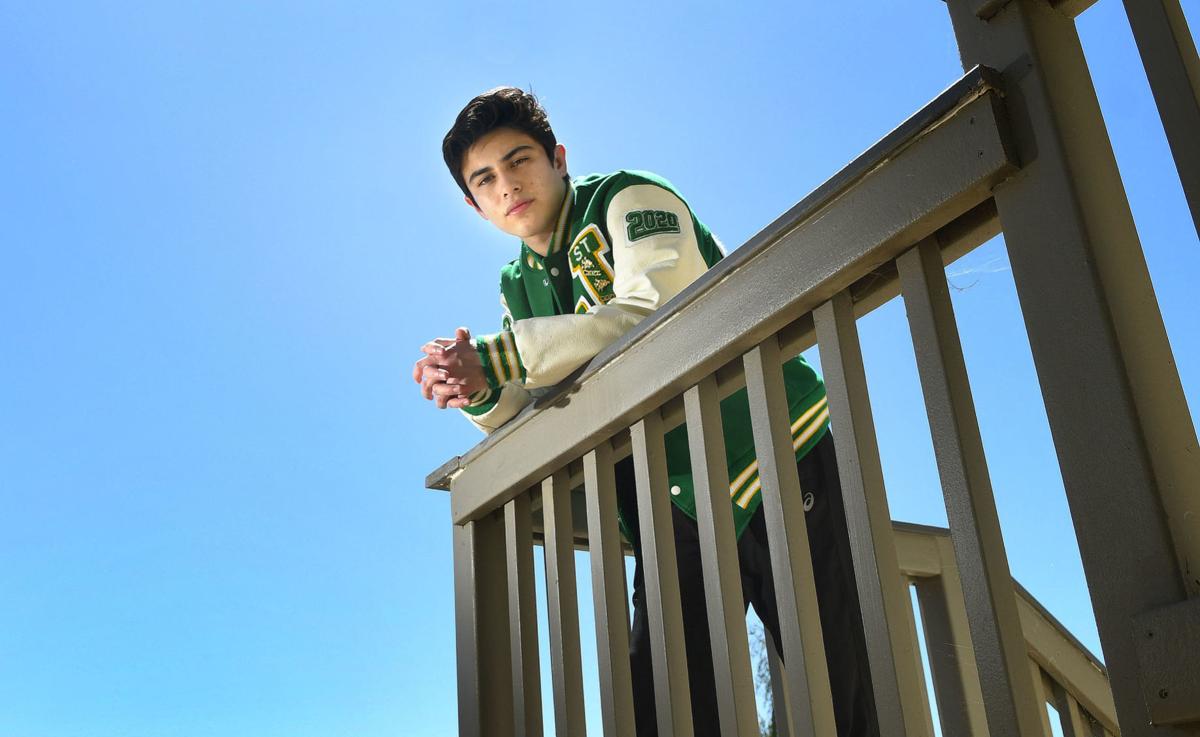 St. Joseph senior Richard Gonzalez made sure his final high school year of wrestling would be his most fruitful one.

The four-year high school wrestler qualified for the CIF State Tournament for the first time, going 1-2 at 147 pounds.

He is one of only two St. Joseph wrestlers to qualify for the state tournament in school history.

Gonzalez had a big junior campaign after a broken ankle early on ended his sophomore season. Gonzalez won two early-season tournaments then took the 147-pound title at the inaugural Mountain League Tournament in 2019, St. Joseph's first campaign in the Central Section.

He finished second at the sectional finals then went 2-2 at the Masters.

Gonzalez made his big breakthrough in his last prep wrestling campaign. He said the most progress he made from his junior season to his senior one was on the mental side.

"I decided I deserved to be in the position I was in because of the hard work I'd put in during the summer," Gonzalez said.

He was the St. Joseph nominee for the 2020 Northern Santa Barbara County Athletic Round Table Male Athlete of the Year scholarship honor.

The NSBCART awards its scholarships at its annual awards dinner. The 2020 dinner was cancelled because of the coronavirus pandemic.

The state tournament appearance was the successful culmination of a wrestling career Gonzalez said started at age six.

"I first started wrestling for Guadalupe Wrestling then the California Gladiators," before he wrestled for St. Joseph, said Gonzalez.

"It's been quite a journey."

His college plans are set. Gonzalez will attend Fresno State and major in criminal justice.

As to whether or not he will try to walk on to the Fresno State wrestling team, "I'm kind of 50-50 with that right now," Gonzalez said.

With school facilities closed in the wake of a statewide shelter-in-place directive California Governor Gavin Newsom issued because of COVID-19, Gonzalez said he has still been able to work out on his own.

"I have a wrestling mat at home," he said. "I shadow wrestle."

Gonzalez said he eventually wants to become a homicide detective.

"Honestly, I've always been kind of into the police field," he said.

"First of all, I always wanted to be a cop and help people. I think cops get kind of a bad rap."

He is also community-minded when it comes to the environment. During his time at St. Joseph, Gonzalez was a member of a school club known as the Eco-Knights.

"The club was formed to spread awareness to our fellow classmates within the school about the waste. Plastic creates a tremendous amount of waste in our environment," Gonzalez wrote in his scholarship application.

"This club was an amazing experience for me because it showed that if enough people come together for a common goal to save the planet, anything is possible."

Gonzalez wrote that, with the goal of helping promote the usage of less water bottles, the Eco-Knights club raised money to help build a refillable water station for the school.

The water station "has refilled over a thousand water bottles," Gonzalez wrote.

Our Senior Spotlight series highlights high school student-athletes who have had their senior years disrupted due to the coronavirus pandemic. St. Joseph wrestler Richard Gonzalez qualified for the state tournament earlier this year, becoming only the second wrestler in school history to achieve that feat.

Even with pandemic, Ashley Reynoso looks toward a promising future with Cal State Monterey Bay

A shoulder injury cut the sophomore's freshman collegiate basketball season short. She said the shoulder is healed now, and that is part of the reason why Reynoso's outlook is sunny.

St. Joseph senior wrestler Richard Gonzalez holds two of the medals he won this season, with the Division 5 title at 147 pounds and qualifying for the state tournament. He is only the second SJ wrestler to qualify for the state tourney. Gonzalez is the Knights' Athlete of the Year nominee for the Northern Santa Barbara County Athletic Round Table.