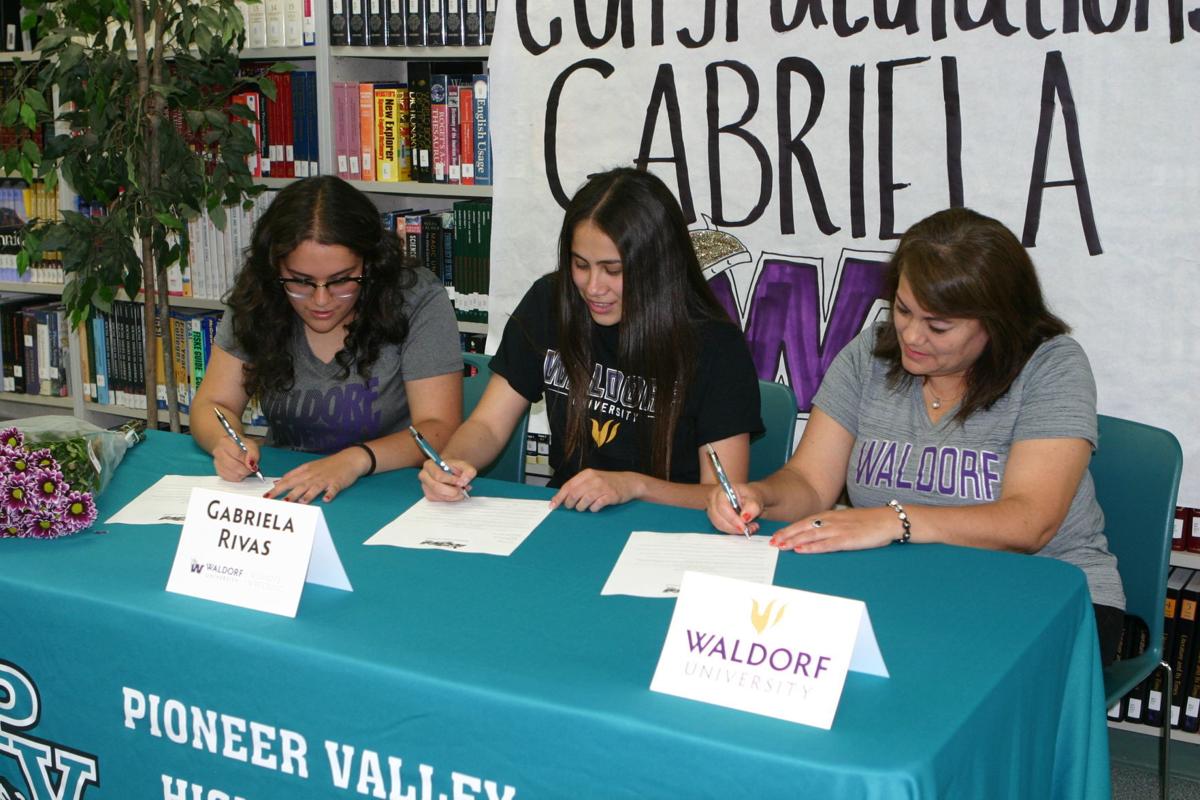 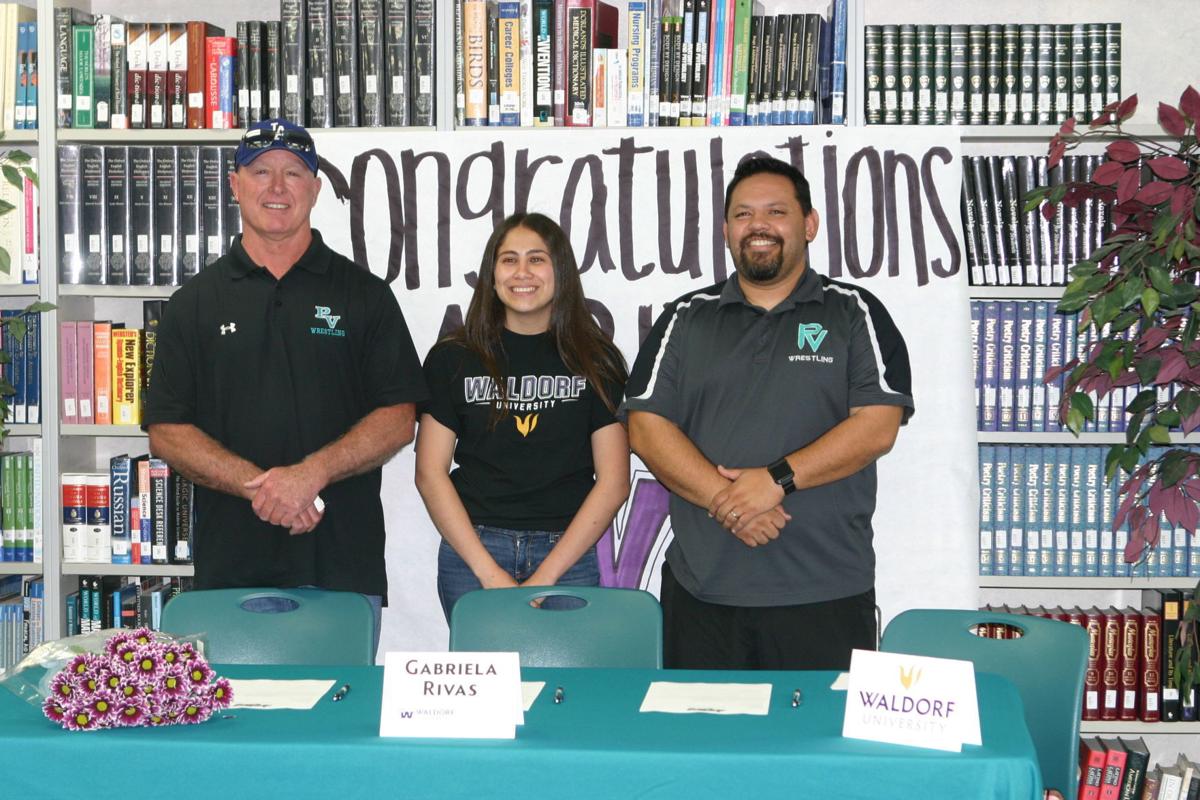 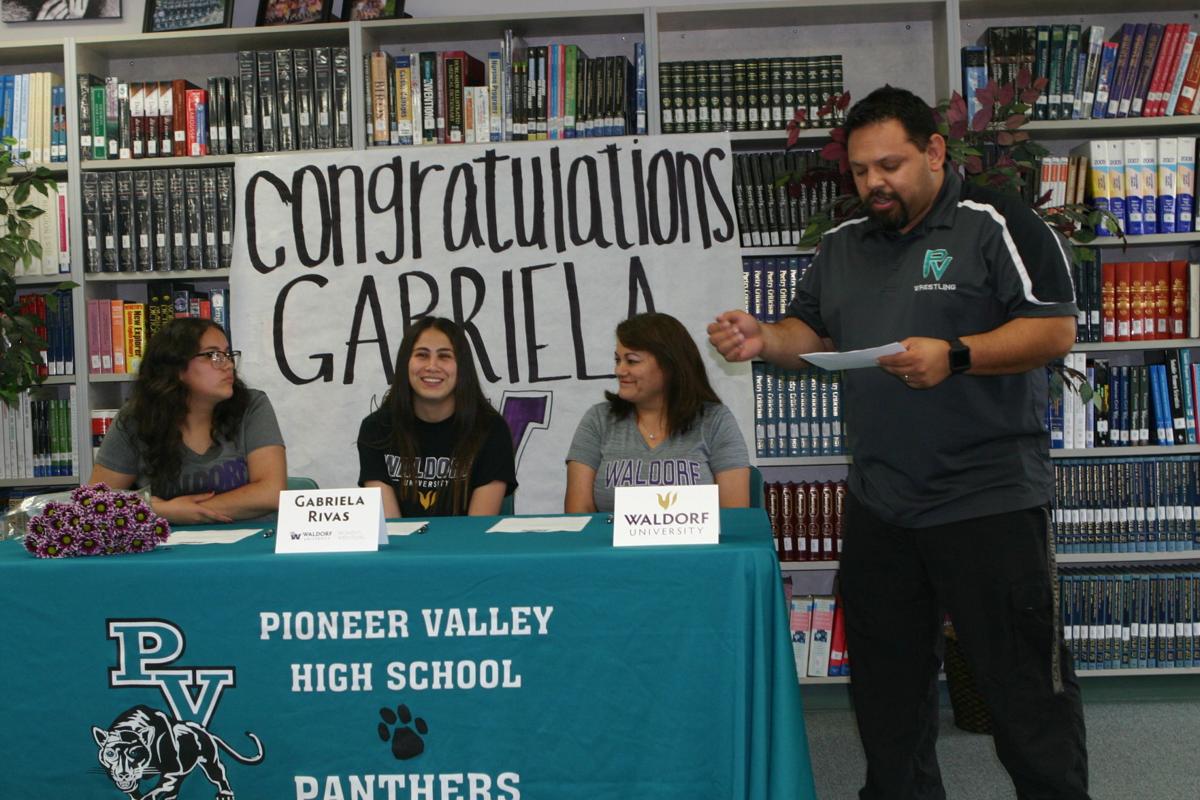 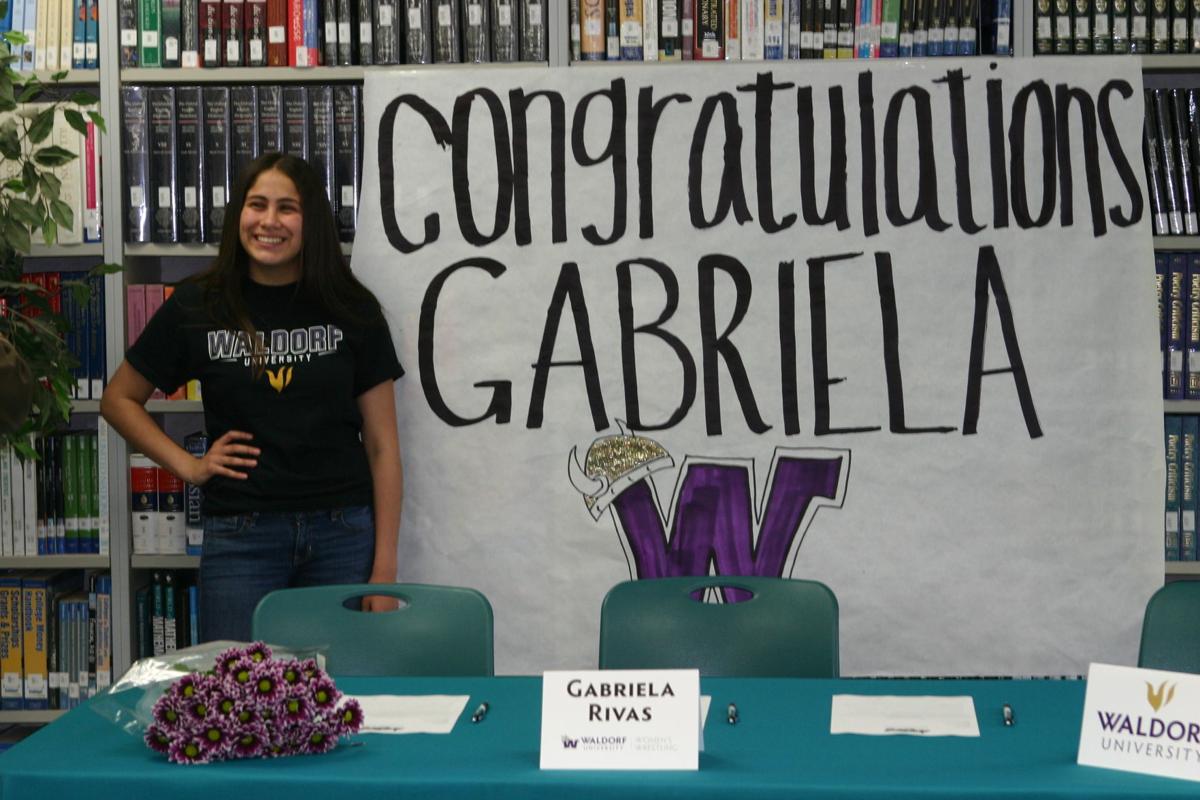 Pioneer Valley senior Gabriela Rivas stands next to a giant poster made by her classmates just before Rivas signed her national letter of intent to attend Waldorf University Wednesday in the school library.

Waldorf University is a pioneer in women’s collegiate wrestling.

On Wednesday, surrounded by family, friends, coaches and administrators in a packed PVHS library, Rivas signed her national letter of intent to attend Waldorf on a wrestling scholarship.

“Waldorf was one of the first universities to establish a women’s college wrestling program back in 2010,” said Kevin Ilac, Pioneer Valley’s longtime wrestling coach who stepped back a bit this year into an assistant coaching role. “We’re so proud of Gabby. She’s a first generation college student — the first in her family to go on to a four-year college. Gabby will have a wonderful opportunity to expand the future for herself and her family.”

Before signing, Rivas addressed the crowd.

“I’d like to thank you all for coming today, all my family is here and my friends,” said Rivas. “And a special thanks to coach Ilac. Without him, I wouldn’t have had the chance to go to college at all.”

Rivas plans to major in education with a minor in English.

“I want to become an English teacher,” said Rivas.

And she thinks the small university with just 680 students that sits on a 50 acre campus 120 miles south of Minneapolis is the perfect fit.

“I visited the school two weeks ago. I like that it’s in a small town with a beautiful campus. I like that it’s a small school because I’ll get one-on-one instruction from my teachers,” said Rivas. “I’m a little nervous going so far away from home but I’m more excited than anything. I’m getting the chance to go to a college that has a strong foundation in women’s wrestling. But I’ve never been in the snow before. Seeing snow for the first time is going to be something that’s very interesting for me.”

While it’s a first for the Rivas family, it’s not a first for Waldorf, an NAIA university that competes in the North Star Athletic Association.

When Rivas joins the team in late August, she’ll have company from the Central Coast.

The Lady Warriors currently have two women’s wrestlers from the Santa Maria Valley.

Both Bautista and Lyons wrestle at 136 pounds — a bit heavier than Rivas’ weight class.

Gilder, who just completed his fifth year at the helm of the Lady Warriors, sees California as prime recruiting territory for his elite program.

And in the 2017-18 season, Gilder and Waldorf sent 11 women to the Women’s Collegiate Wrestling Association National Championships.

Gabby Rivas won’t be the family’s only first generation college student in the fall.

She’s sharing that achievement with her twin sister, Daniela, who is also graduating from Pioneer Valley but plans to stay closer to home.

“I’m going to go to Hancock College,” said Daniela Rivas. “I wrestled at Pioneer Valley, too, but I don’t want to do it at the college level so I’m staying home.”

“Academically and athletically, we push each other. We’re both always striving to be better,” said Daniela Rivas. “This will be the first time in our 18 years that we’ll be split up.”

“Gabriela is going away for college and Daniela is staying home. I’m so proud of them both,” said the twins’ mother Carmen Rivas. “I’m happy and sad — happy that the girls are going to college but sad to see Gabriela move so far away.”

“It’s always nice to see your high school program validated by sending kids on to the next level. Gabby is the eighth girl in our school’s history to go on to wrestle at the collegiate level,” said Ilac. “Gabby is one of the lighter weight girls and the lighter weights are more competitive — they’re the most sought after weights. She knows she’s going to one of the finest college programs in the country.”

“Clearly, girls wrestling is a good path for our students’ career opportunities,” said Pioneer Valley Athletic Director Greg Lanthier. “Kevin and (head coach) R.D. Noel do a good job of preparing the girls and they’ve done a good job of building our reputation for turning out quality women’s wrestlers. If you do that, universities are going to take notice.”

Gabby Rivas heads off to Iowa at the end of August and will get right to work.

The 2018-19 season begins at home on Sunday, Oct. 14 when Waldorf hosts the Lady Warriors Open.

“I have to be in shape when the school year starts so I’m hitting the gym every day after school to practice freestyle wrestling,” said Gabriela Rivas. “Opportunities like this don’t come along every day but this one came along for me. I’m proud of myself but I wouldn’t have been able to do this without the help of my family, my coaches and teachers. I’m going it be on my own. I just know I’ll have an exciting future.”

Pioneer Valley senior Gabriela Rivas stands next to a giant poster made by her classmates just before Rivas signed her national letter of intent to attend Waldorf University Wednesday in the school library.