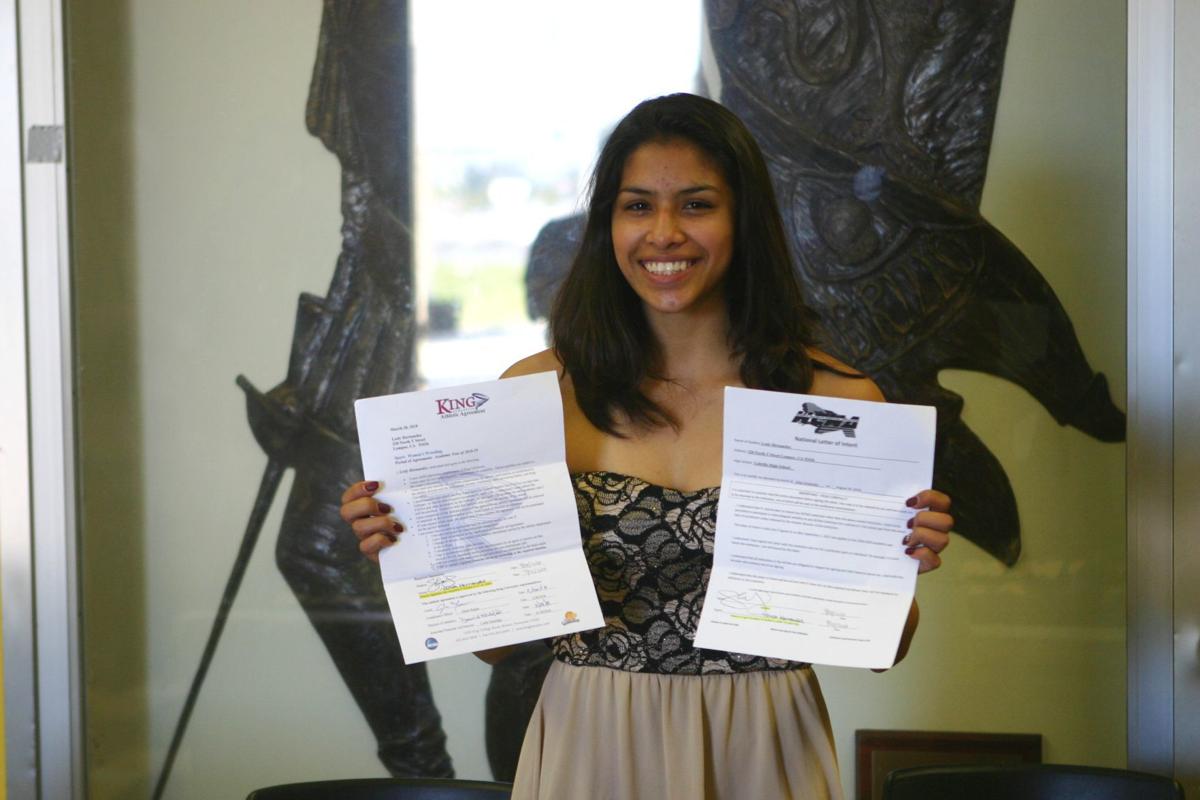 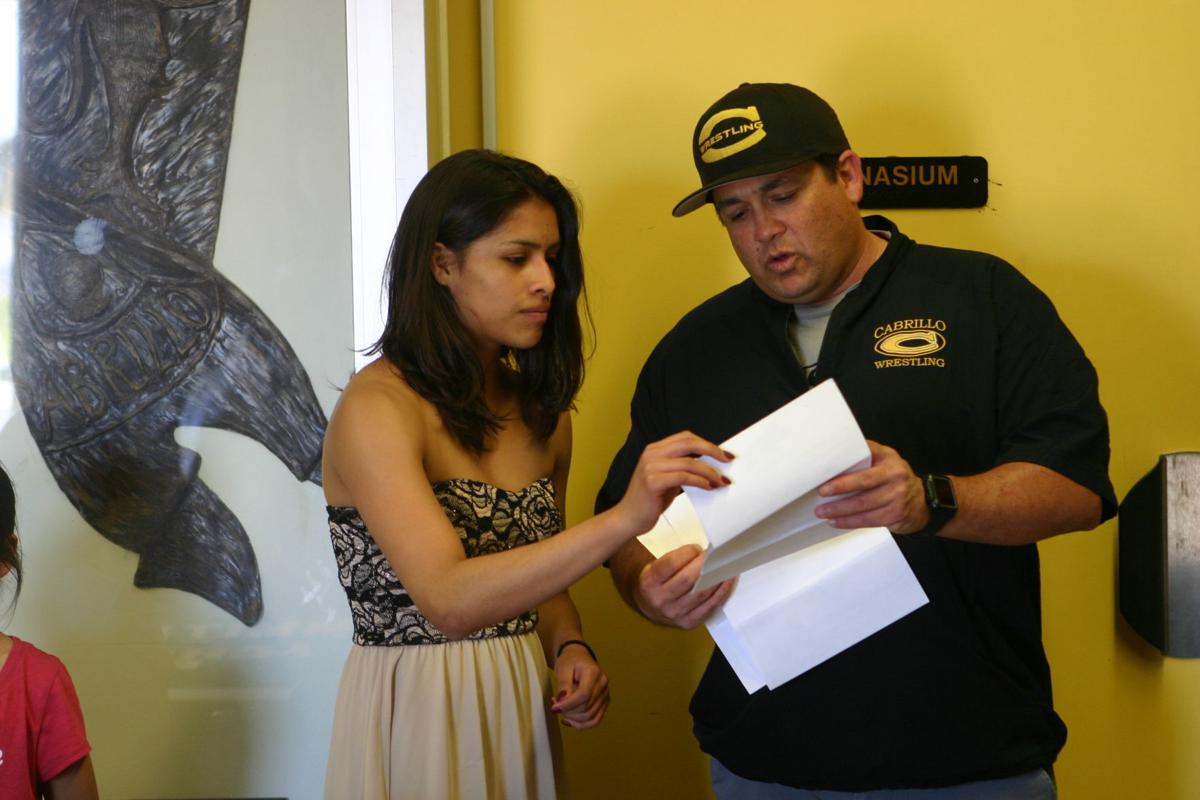 Lesly Hernandez, left, sorts through her National Letter of Intent papers with her wrestling head coach Mike Wallace on Friday inside the Cabrillo gym lobby. The 101-pound two-time CIF state qualifier will now compete at King University in Tennessee. 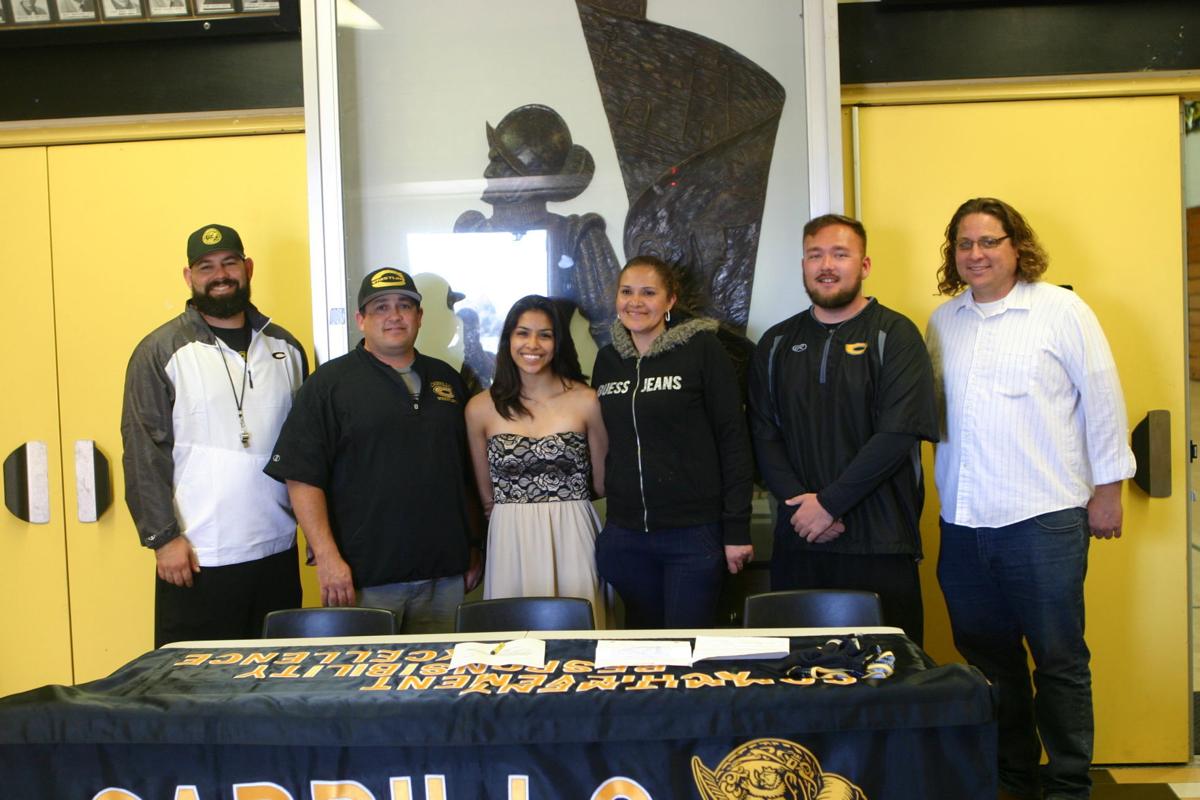 Lesly Hernandez (middle) is joined by her wrestling coaches, mother and friend during her signing day ceremony at Cabrillo High's gym lobby on Friday.

History was made with Lesly Hernandez providing her signature inside the Cabrillo gym lobby on Friday.

Not only did the four-year varsity wrestler officially sign with King University in Tennessee, but completed this first for a wrestling program that was launched in the late '60s in Vandenberg Village: Becoming the first girl wrestler in CHS history to sign a National Letter of Intent with a university.

Hernandez, a two-time CIF state qualifier in the 101-pound class, was joined by her closest friends, family and coaches inside the lobby during her signature moment. She will continue her wrestling career at the private university located south of the Virginia border.

The Tornados compete at the NCAA Division II level. The four-year Presbyterian university held its women’s wrestling debut in the 2010-11 winter sports season.

A whirlwind of emotions swept through Hernandez after the stroke of a pen completed her signature on the Letter of Intent.

Hernandez had completed a science project beforehand and then walked over to the gym lobby – where her mother, CHS wrestling coaches and other proud supporters awaited her.

Hernandez not only overcame the gauntlet of doing all four years of wrestling at Cabrillo, but also took some early hardships in her first two seasons on the mat: She wrestled with only guys and took several losses.

But, that experience would only prepare her for this: Los Padres League title runs and two trips to Visalia in March – which is the site of the CIF State Girls Wrestling Finals. She emerged as Cabrillo’s first-ever female representative in the state tournament.

Not only was this Friday a crowning moment for Hernandez, but for her head coach Mike Wallace – who says he officially has produced his first college level wrestler at Cabrillo.

Wallace has seen more interest from the female student body at CHS regarding the growth of girls wrestling. The coach, who completed his second season as the head man this past season, also calls Hernandez’s moment as a door opener for future generations of female wrestlers.

“There are several other girls on the team who may have this opportunity as well,” Wallace said. “But this is actually a bigger door opener for girls wrestling as a whole, because this is a relatively new sport for all of California.”

Plus it’s a sport that’s experienced growth statewide – and at the college level from what Wallace saw when he and the CHS coaches helped Hernandez find a college.

“When I look online, I see college after college now starting girls wrestling programs,” Walalce said. “From what I understand, it’s one of the fastest growing sports in the country right now for college. For any girl to be remotely interested in wrestling, it’s a great time for them to get into it.”

Hernandez won’t be the lone California girl on the Tornado roster once she sets foot on campus. Stephanie Maldonado (San Diego Clairemont High), Izzy Hook (Chula Vista Eastlake), Aleeah Gould (Riverside Canton), Gabby Garcia (Anaheim Valencia) and Nicole Joseph (Camarillo) are on the current roster. The program also had Regina and Marina Doi of Kingsburg – both of whom were seniors this past season.

Leading from the first round on, the Saints racked up 215 points to second-place Pioneer Valley’s 181 and won the Central Coast Athletic Association (CCAA) Girls Wrestling Finals at host Nipomo High School handily.

For Cabrillo coach Courtney Monedero, whose daughter Lydia won by fall in the 152-pound championship match, his team's strong showing was a breakthrough in itself.

Santa Barbara edged runner-up Dos Pueblos 193-190 for the team title, and North County wrestlers made a pretty good showing at the Channel Lea…

Lesly Hernandez, left, sorts through her National Letter of Intent papers with her wrestling head coach Mike Wallace on Friday inside the Cabrillo gym lobby. The 101-pound two-time CIF state qualifier will now compete at King University in Tennessee.

Lesly Hernandez (middle) is joined by her wrestling coaches, mother and friend during her signing day ceremony at Cabrillo High's gym lobby on Friday.