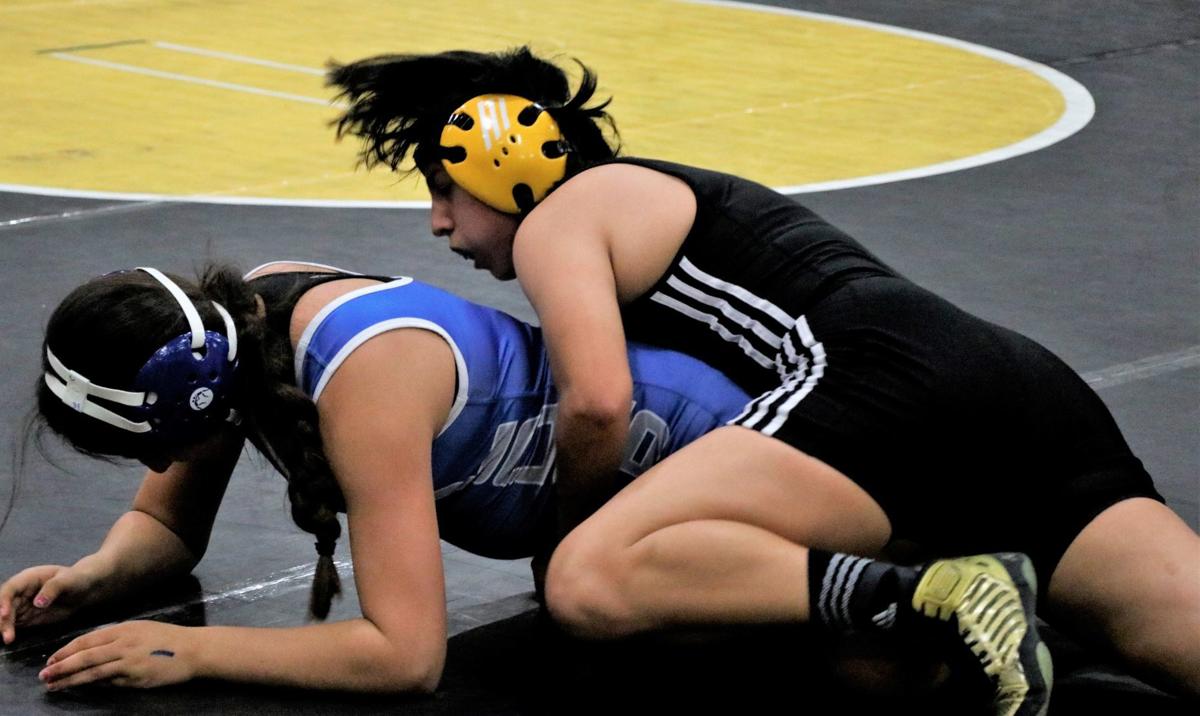 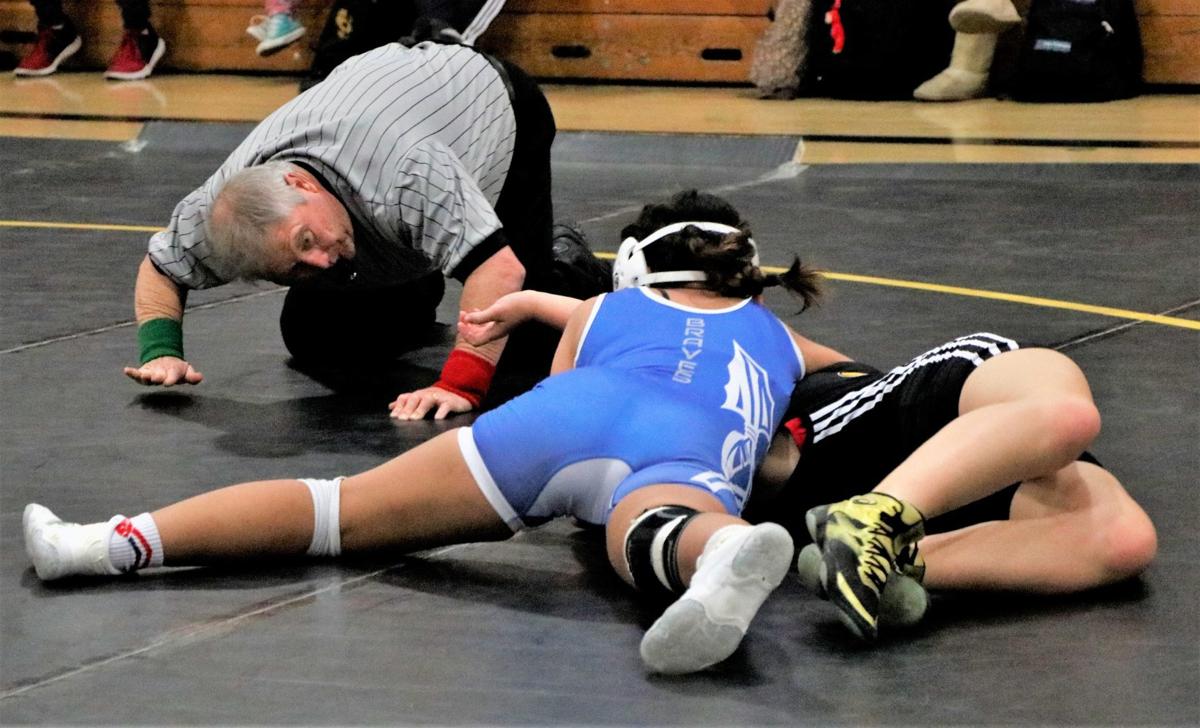 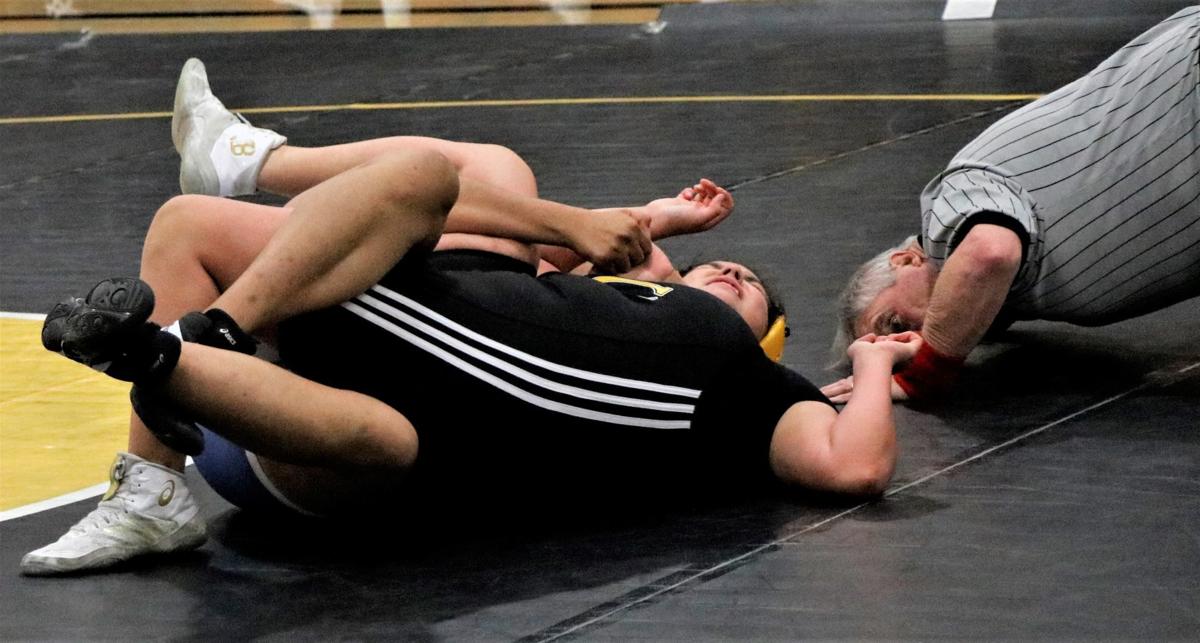 The Chargers edged the second-place Conquistadores 150-144. Santa Barbara finished third in the four-team field with 66 points. Lompoc was fourth with 55.

The top three finishers in each weight class medaled.

For Cabrillo coach Courtney Monedero, whose daughter Lydia won by fall in the 152-pound championship match, his team's strong showing was a breakthrough in itself.

"They were the ones who put in all the hard work during the summer, in the wrestling room this season."

"This was my biggest win. In anything," said Munden-Manko after she, as did the other Cabrillo champs in theirs, earned a fall in her title match.

Munden-Manko is a freshman and a first-year wrestler. "A friend just invited me to join the conditioning," Munden-Manko discovered she liked what went into a wrestling program, she stuck with it and now she is a league champion.

Fiona Cate of Dos Pueblos received a walkover to win at 133 pounds. After that, a string of Cabrillo pins fallowed, with Burke at 139 pounds, Esparza at 145 and Lydia Monedero at 152 all racking up falls.

Lompoc sophomore Yoanna Esquivel was the other Lompoc Valley champion. She notched a fall at the 1:01 mark of the first round.

"I did a single, power half move," to win, said Brodeur after she became the first champion from the Lompoc Valley. "It's one of my favorite moves.

"It's the first time I've ever won at this tournament. It feels really good."

Adames won at this tournament for the second time, and this time in the title match, "I just really tossed her," Adames said after pinning Kelly Zamora of Dos Pueblos at the 1:33 mark of the second round.

Burke is a first-time league tournament winner. She got the job done "with an ankle move," she said. "I just did it because the situation called for it."

Esquivel is yet another first-time league champion.

"I wrestled at this tournament last year and didn't do very well," the Lompoc sophomore said. "I just put in a lot of work over the summer, got a lot better."

Regalado and Esparza both won by fall. Aparicio took a 9-0 major decision in her title match.

Some upper weights winners included Maria Isa Silva of Dos Pueblos at 162 pounds and Alessandra Urquilla of Santa Barbara at 191. Both won by fall.

The medalists advanced automatically to the CIF Southern Section tournament which will take place next Friday and Saturday at Camarillo High School.

Leading from the first round on, the Saints racked up 215 points to second-place Pioneer Valley’s 181 and won the Central Coast Athletic Association (CCAA) Girls Wrestling Finals at host Nipomo High School handily.

Santa Barbara edged runner-up Dos Pueblos 193-190 for the team title, and North County wrestlers made a pretty good showing at the Channel Lea…