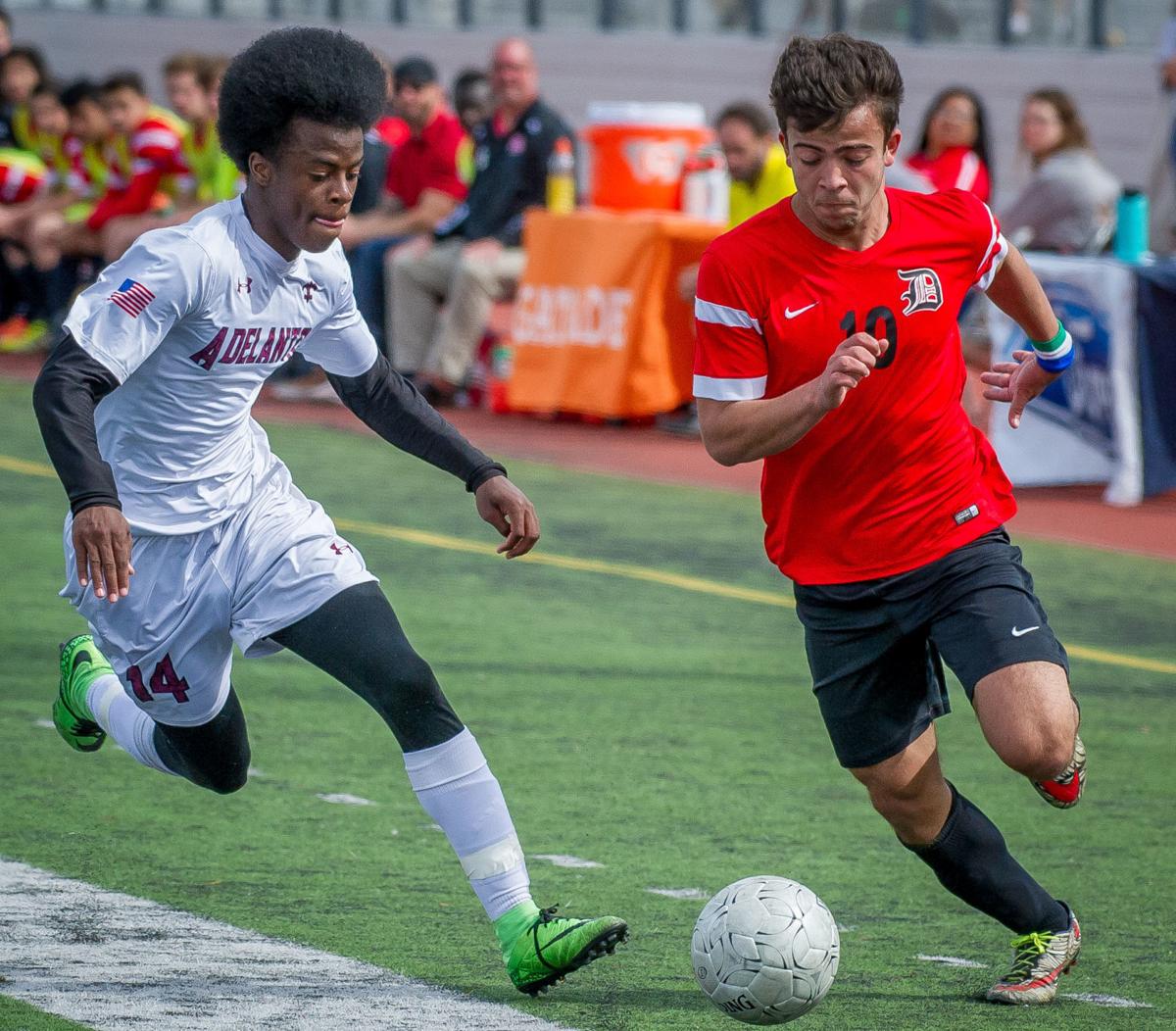 Dunn's Rodney Michael, right, battles Adelanto's KMari Wilson for control of the ball during the CIF Southern Section Division 6 championship game in 2017. Michael was named the Gatorade Player of the Year for California that season and is currently starring at UC Santa Barbara. 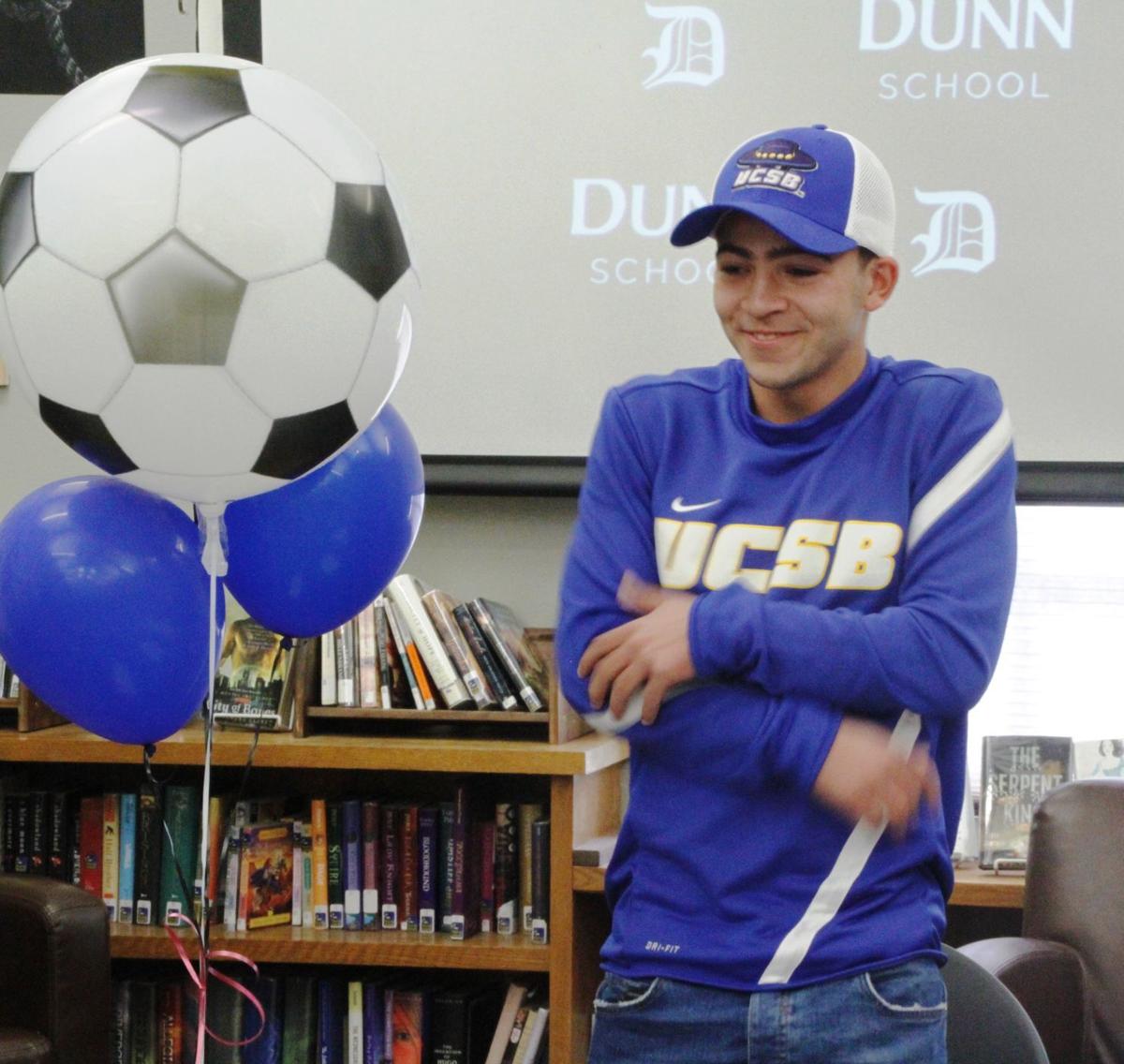 Rodney Michael celebrates on National Signing Day at The Dunn School in February of 2017. Michael signed to play soccer at UCSB and won the Gatorade Player of the Year award for the state of California. Since signing with the Gauchos, Michael has scored 23 goals and dished out 15 assists in three seasons at UCSB.

Rodney Michael was named California's Gatorade Player of the Year for boys soccer in 2017.

Michael earned that honor while playing for a small boarding school in the Santa Ynez Valley that has gained quite a reputation for producing world-class soccer players.

In fact, Michael was the second Dunn School soccer player to earn that recognition, joining Abu Danladi, who earned the national Gatorade Player of the Year award in 2014.

Michael's and Danladi's stories mirror each other's even more than that. Both came to Dunn from Western African countries. Both have since risen to college stardom.

Michael played three seasons of soccer at Dunn in Los Olivos after coming to the United States from Sierra Leone. Danladi arrived in Los Olivos from Ghana and went on to play at UCLA before getting selected No. 1 overall at the MLS Super Draft.

What has Michael been up to since leaving the school for UC Santa Barbara? Well, quite a bit actually.

Michael, who would be wrapping up his senior season with the Gauchos about now if it weren't for the COVID-19 pandemic, has piled up the accolades in Santa Barbara.

Michael has scored 23 goals in 58 games with 15 assists at UC Santa Barbara. In 2019, as UCSB qualified for the NCAA Tournament, he scored in a 3-1 first-round win over Cal and scored twice as the Gauchos crushed St. Mary's in a second-round match 4-0.

Michael has arrived at the intersection of college and professional soccer stardom after his journey started in Sierra Leone. Michael lists Freetown, Sierra Leone, as his native city. Freetown is the largest city in the country and the African nation's capital with a population over 1 million.

When Michael signed with UCSB in 2017, he told the Valley News, “I’m really excited and happy. I can’t really describe what I’m feeling but I’m excited to be a Gaucho.”

It appears that Michael's feeling of excitement was the right one. UCSB went 15-5-4 in 2019 and advanced to the NCAA Division I quarterfinals. They beat Indiana 1-0 in the semifinals before falling to Wake Forest in the NCAA quarters. The Gauchos lost 2-0 to UC Davis in the Big West Tournament finals last year. UCSB went 6-8-5 in Michael's first season in Santa Barbara.

“Ever since I came into America, I’ve been watching UCSB play soccer every week when they had a game. I’m really excited to play in that stadium and be in soccer heaven,” Michael told the SYV News in 2017. “Obviously they have a really good education. But one of the things that got me to make my decision was their fans. I went to a lot of their games and I saw how crazy their fans were. It’s one of the best soccer atmospheres in America.”

UCSB is hoping to play a soccer season in 2021 after the Big West Conference postponed all fall sports through the end of the calendar year in July due to the pandemic. Michael scored eight times with eight assists in 2019, finishing third in his conference with 24 points.

Dunn's Rodney Michael, right, battles Adelanto's KMari Wilson for control of the ball during the CIF Southern Section Division 6 championship game in 2017. Michael was named the Gatorade Player of the Year for California that season and is currently starring at UC Santa Barbara.

Rodney Michael celebrates on National Signing Day at The Dunn School in February of 2017. Michael signed to play soccer at UCSB and won the Gatorade Player of the Year award for the state of California. Since signing with the Gauchos, Michael has scored 23 goals and dished out 15 assists in three seasons at UCSB.