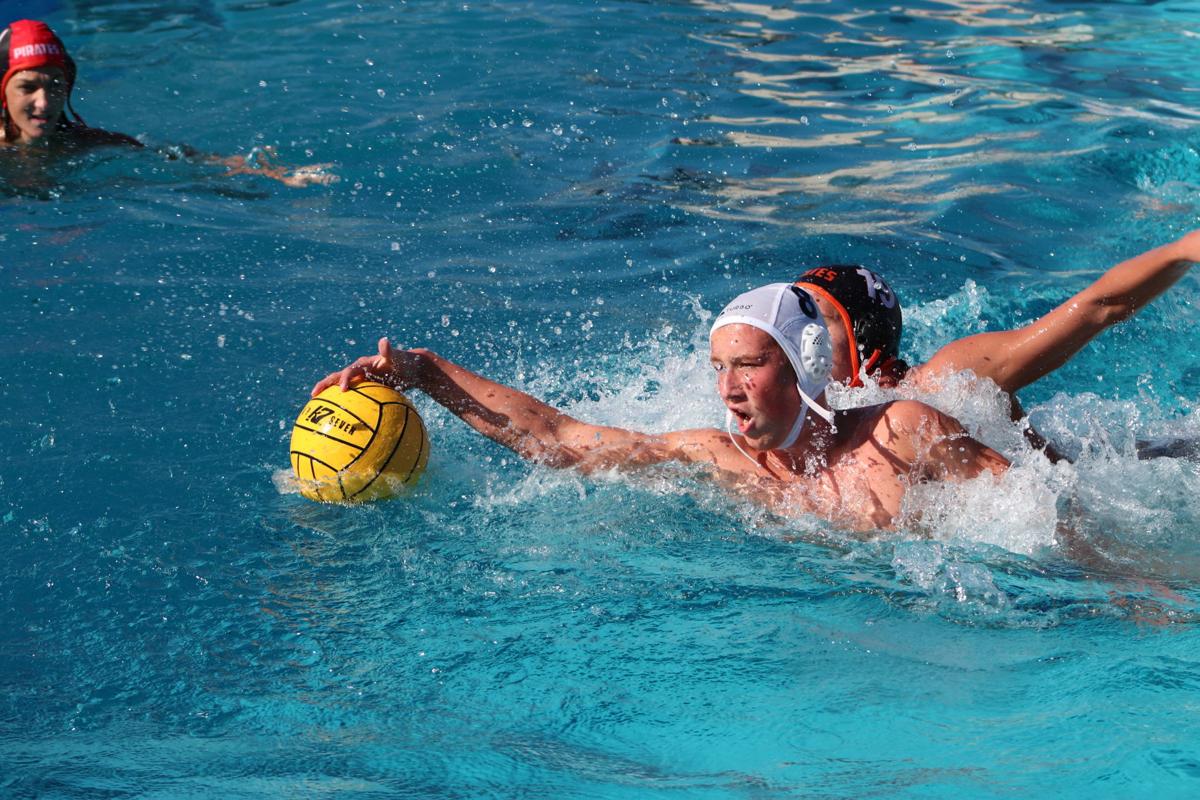 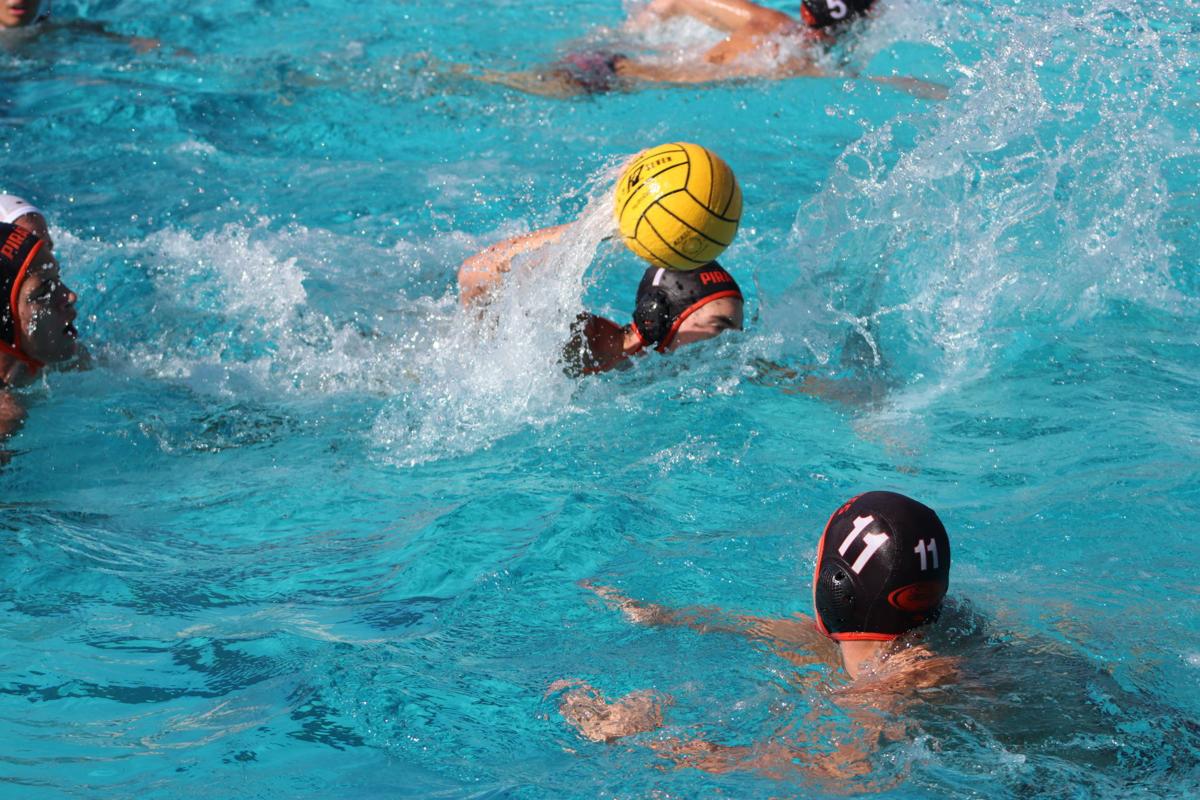 Santa Ynez's Mateo Del Solar (7) swims with the ball as teammate Henry Allen (11) gets in position for a shot during Tuesday's Channel League game at Santa Ynez High School. 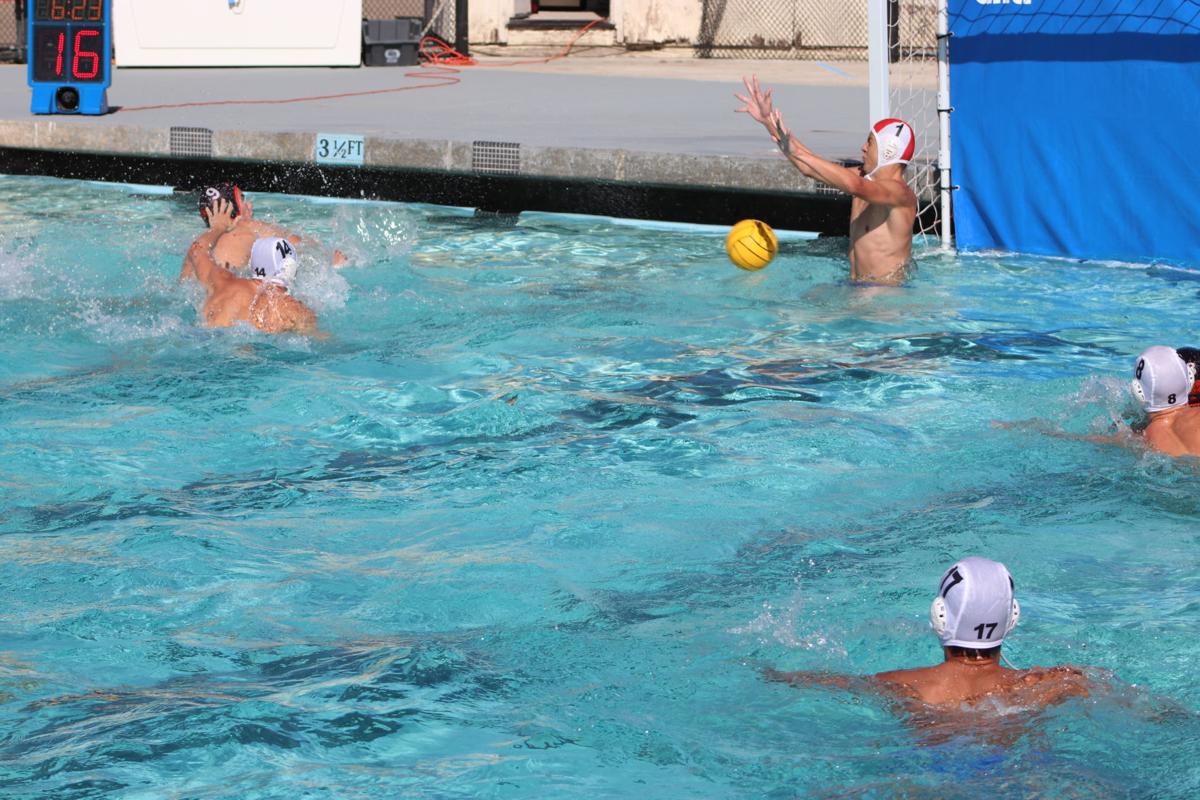 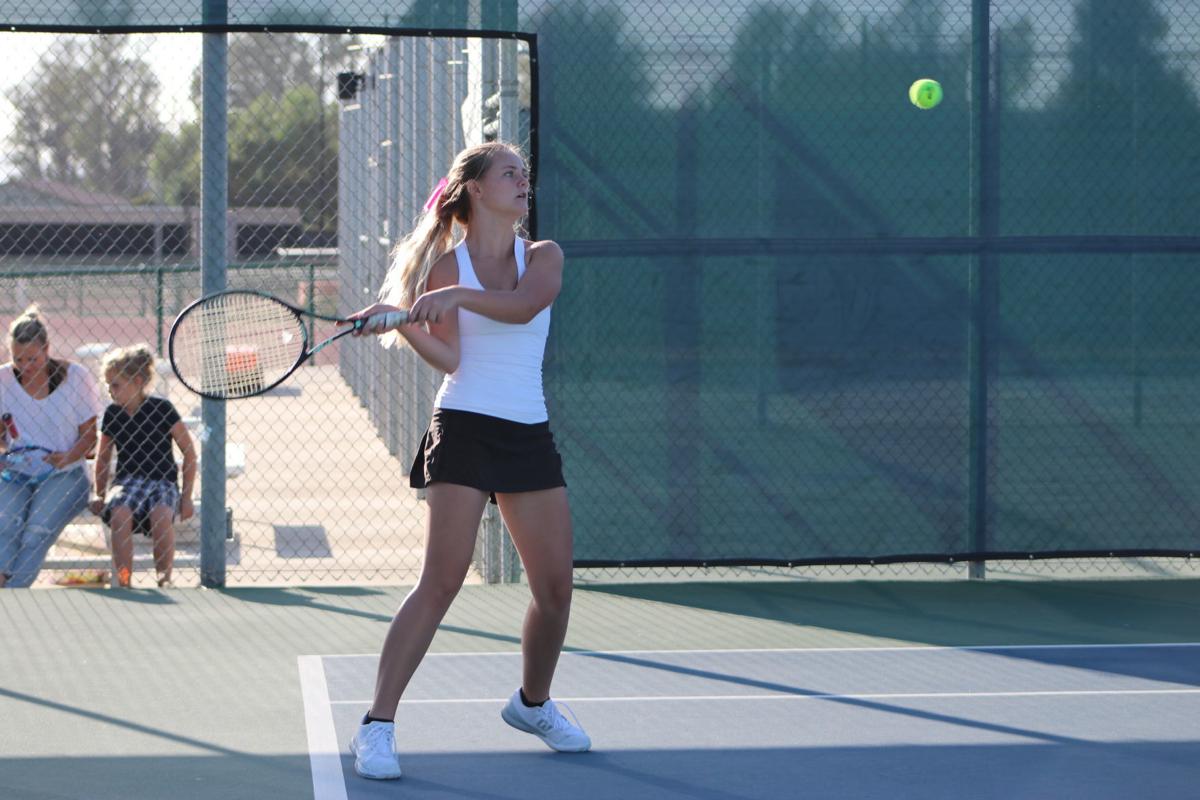 The Santa Ynez Pirates took advantage of their significant edge in experience and rolled to a 25-5 victory over the Lompoc Braves in a Channel League boys water polo match Tuesday afternoon at Santa Ynez High School.

“For a lot of our players, it’s their first year playing since we didn’t have a team last year so we’re all learning together,” said Lompoc head coach Carl Thacker. “The experience we gain this year hopefully will benefit us next year and on down the road. I can see all our players are getting better as the season goes on.”

“I’m happy to see they’ve got their team going again,” said Santa Ynez coach Jake Kalkowski. “I’m happy they came in here and gave our guys a battle. They never quit and that was good to see.”

Despite the lopsided score, the Braves never backed down, constantly battling the Pirates for possession every time a Santa Ynez player touched the ball.

But Santa Ynez’s experience showed as 11 different players scored at least one goal.

Grey McCarthy, Henry Allen and Lukas Bohnet — with one goal apiece — rounded out the Pirates’ scoring.

The Braves were led by Jarred Torres, who scored three times. Mark Ainsworth and Jullian Torres added the Braves’ other goals.

The Pirates came out strong starting with the game-opening sprint to the ball.

Grieco won the sprint and immediately fired a pass to Davidson who was racing toward the goal.

In one motion, Davidson caught the pass and fired a shot past Lompoc goalie Brendan Bailey at the 6:48 mark of the 7-minute quarter.

Seconds later, after a long pass from Santa Ynez goalie Drake Clark, Grieco rocketed a shot from about 5-meters out into the net, 38 seconds into the game.

Down 3-0, Jullian Torres got the Braves on the board with a point blank shot past Clark to cut the Pirates’ lead to 3-1 with 4:26 left in the quarter but that was a close as Lompoc would get.

With an 8-1 lead after the first quarter, Kalkowski sat his starters but the substitutes wanted to prove they deserve to be in the pool, too, and they stretched the Santa Ynez lead to 15-1 at the half.

The Braves showed their spunk to open the second half.

Although Santa Ynez won the sprint to the ball, Jarred Torres stole the ball, swam ahead of the field and tossed a shot past Tristan Linder for the Braves’ second goal 9-seconds into the third quarter.

After a Blanchard goal, Jarred Torres scored again just over a minute into the quarter.

Later, Bailey skipped the ball past Linder at the 3:48 mark for Lompoc’s fourth goal, but the Braves still trailed 18-4 heading into the final quarter.

With 5:07 left in the game, Jullian Torres found Ainsworth right in front of the goal and Ainsworth took the pass and tossed it into the net for the Braves’ final score.

Santa Ynez (11-6, 1-1 Channel) has its Senior Game Thursday when the Pirates host the Cabrillo Conquistadores in another Channel League match-up.

“That’s a big rivalry game for us,” said Kalkowski. “Cabrillo is much improved. I know they’ll be ready to go.

“The Pirates showed great intensity today,” said Santa Barbara coach Danny Echt. “A lot of these sets have been really close. Santa Ynez has improved a lot since we played them earlier in the season.”

The Dons’ No. 1 singles player Claire Stolts and No. 2 Sophia Ostaug both swept their three sets.

The Don’s No. 3 singles player Heidi Hatto won two of three sets to put the match in the win column.

“Our girls are showing steady improvement,” said Echt of his Dons who are in second place in the Channel League. “We’re pretty even with the top teams in the league and the teams that we’ve lost to all have top talent.”

Playing at No.1 doubles, the Pirates’ Curti twins, Sophia and Isabella, won two of three sets. No. 2 doubles Tristan Bunderson and Ella Quinney and No. 3 doubles Alana Hinkens and Lexi Hemming each won one set as did Santa Ynez No. 1 singles player Claire Collison.

“The twins did well, they were our top doubles team today,” said Santa Ynez coach Jennifer Rasmussen. “We’re battling to get into fourth place with Cabrillo. “We need to beat Cabrillo Thursday to tie them for fourth. We’re happy to be competitive with Santa Barbara. They’re a top team and we had several close sets.”

“We relaxed after the first game and Lompoc came after us. They outhustled us in the second game,” said Santa Ynez coach Tom Wright. “Lompoc led for most of the second game but the girls gathered it in and pulled out the game and match.”

While the Pirates’ regular season is over, they still have a huge Channel League match on tap for Thursday night.

Santa Barbara will play at Santa Ynez Thursday night at 5 p.m. in a winner-take-all playoff game to determine which of the two squads will finish third in the Channel League to earn the league’s third and final guaranteed CIF Southern Section playoff spot.

Santa Ynez's Mateo Del Solar (7) swims with the ball as teammate Henry Allen (11) gets in position for a shot during Tuesday's Channel League game at Santa Ynez High School.