The pool at Pioneer Valley High School is empty after all scheduled athletic events were canceled because of coronavirus concerns. 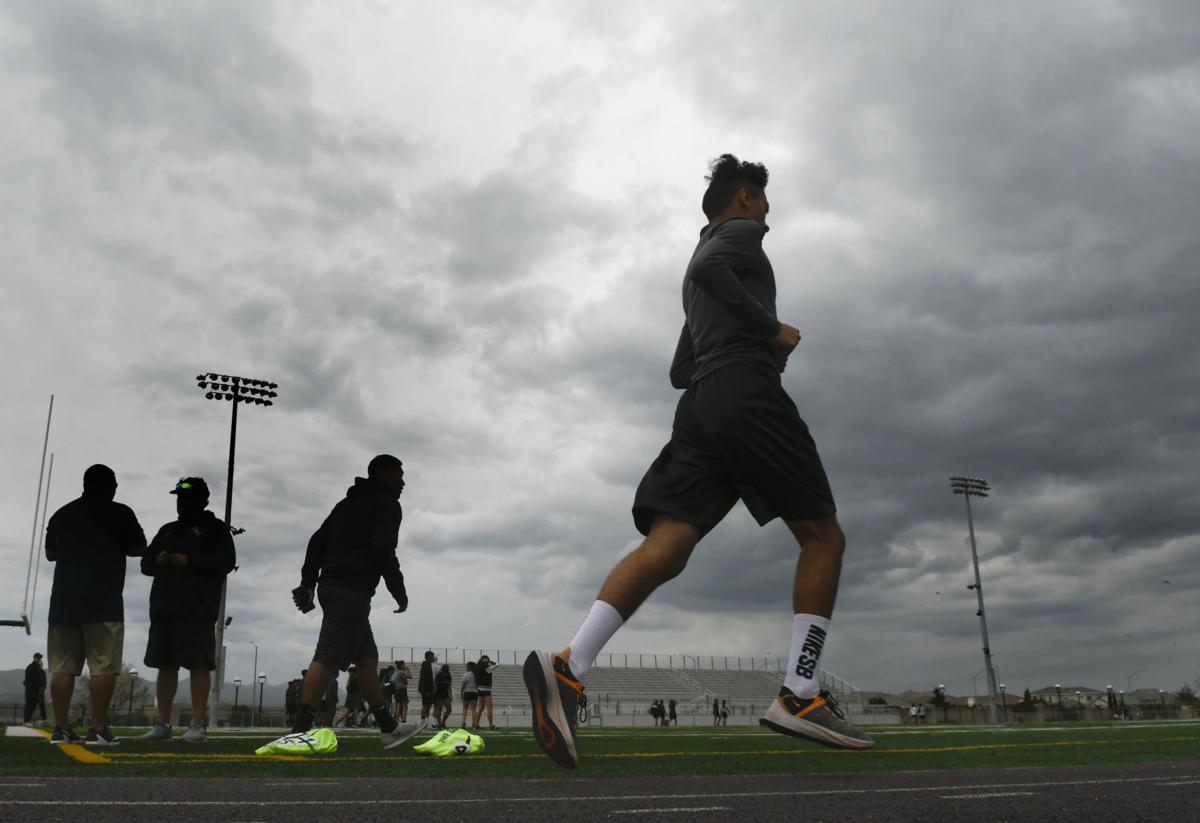 Pioneer Valley High School track team members get in one last workout after the Santa Maria Joint Union High School District announced that athletic competitions and practices would be suspended through because of coronavirus concerns.

The Orcutt Academy boys tennis team was 9-0 in dual matches as of Friday.

Then, the Spartans got the news. As is the case for nearly all area sports programs, their season is on hold at least through the end of March.

The Santa Barbara County Schools Superintendent's office put out an announcement Friday that all of its schools would be closed as of Wednesday, at least through the end of March.

This was in response to California Governor Gavin Newsom's request Thursday that all gatherings of at least 250 people be cancelled because of concerns about COVID-19, the coronavirus. On Sunday, area athletes were dealt another blow as the Centers for Disease Control recommended the cancelling of all events featuring 50 or more people for the next eight weeks in hopes of stunting the spread of the outbreak.

By Friday, most of the county schools, along with the Lucia Mar School District in San Luis Obispo County, had suspended their spring sports programs through at least the end of the month.

"I don't work at the school, and everything (concerning announcements of suspended sports) has been done over emails and text messages from our (athletic director, Chad McKenzie)," said Orcutt Academy coach Art Lopez.

He said that he has, in a way, been put on hold himself.

"I work at Diablo Canyon, in the engineering department, and those of us who are non-essential were told to stay home this week in an effort to minimize personal contact," Lopez said. "Everything's safe over there. They're just trying to figure out the way forward."

Lopez added, "I'm going to text them, encouraging them to stay in shape. Most of my boys are active, whether they're playing tennis or mountain biking, so I don't think that will be an issue. I have two seniors who have been with me four years and I would hate to see it end for them this way."

Meanwhile, Nipomo baseball coach Samm Spears said his players "are not allowed to do anything," at least through the end of March.

"Lucia Mar is saying that (is the case) until the 31st and then they will re-evaluate. We are postponed until further notice."

Santa Maria track coach Brian Wallace, who is also the school's athletic director, said of his program, "Anybody who can will try to work out on their own. I'll basically try to stay in touch with them periodically if I can, and hopefully things will get ramped up again in April."

Righetti boys swim coach Kyle Shaffer said he would encourage his swimmers to stay in condition on their own. Trouble is, swim facilities around town are closed, because of COVID-19.

"I have a feeling most of (the conditioning) will be done on land," he said. "There's not many opportunities to do it in the pool.

"The best case scenario will be April (for area spring sports to start up again), but I think everybody's on the wait and see right now."

The CIF State office is holding its annual spring meeting on Tuesday and Wednesday. The main topic of discussion will be the spring sports season and the end-of-season championships.

"The 10 Section Commissioners and the CIF State Office staff have their annual spring meeting scheduled for Tuesday and Wednesday. The spring sports season is the first matter set for discussion and coordination at this meeting," CIF Executive Director Ron Nocetti said in a statement. "While schools and school districts have authority over the scheduling and rescheduling of regular-season contests, the Sections, and the State Office will discuss how recent school closures and school district's postponement of their spring sports may impact post-season events."

The Santa Barbara County Public Defender on Monday has asked clients in all criminal cases to contact its office to have attorneys make appearances for them in court as a measure to contain the spread of COVID-19.

TJ Boone, an offensive lineman, overcome a diagnosis of atrial fibrillation to complete his sophomore season with the Bulldogs and sign to play football at Carson-Newman University.

The pool at Pioneer Valley High School is empty after all scheduled athletic events were canceled because of coronavirus concerns.

Pioneer Valley High School track team members get in one last workout after the Santa Maria Joint Union High School District announced that athletic competitions and practices would be suspended through because of coronavirus concerns.