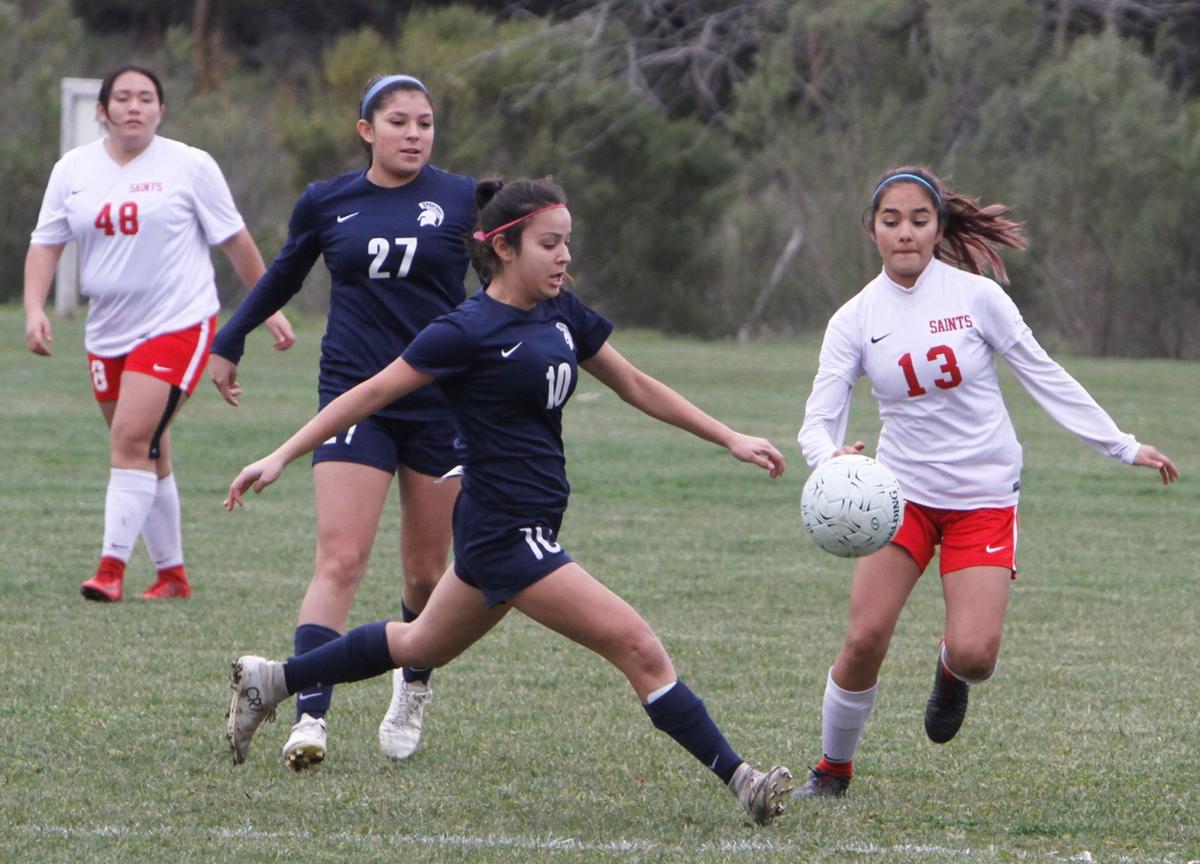 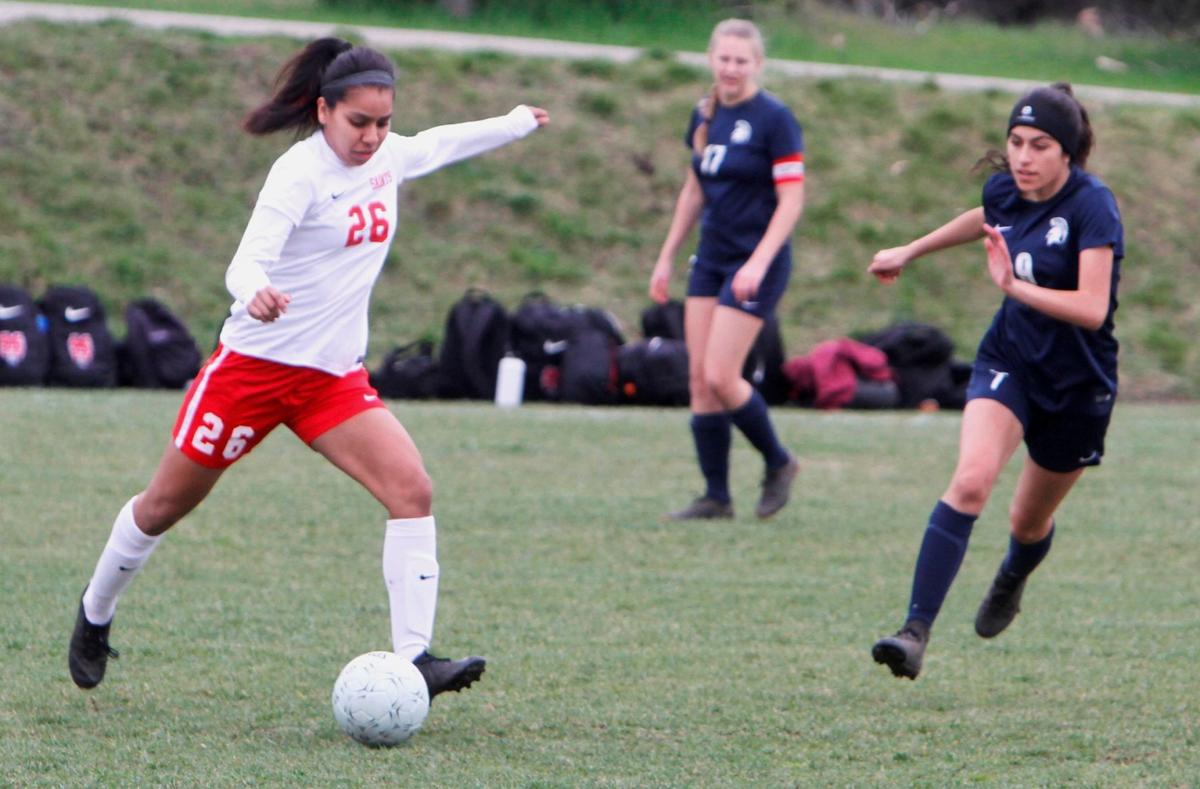 Her team was deadlocked with Orcutt Academy in the 104th minute Tuesday and when Santa Maria freshman Paola Diaz launched a shot then, she didn't think her try would break the tie.

Turned out, Diaz, from about 40 yards out, had struck the ball perfectly. The ball bounded high into the net for a golden goal, giving the No. 11 Saints a stunning 3-2 win over the No. 6 Spartans in the second overtime of this CIF Central Section first-round Division 3 playoff game at Orcutt Community Park, Orcutt's home pitch.

"I honestly didn't think it was going in," she said afterward.

"This was my first golden goal. We've been practicing volleys, and I just set it up and took a shot."

Diaz let the ball bounce off her leg then corralled it, uncorked a shot and scored.

Santa Maria (12-9-2) will play at No. 3 Visalia Golden West in the quarterfinals. The game is tentatively scheduled for Thursday at a time to be determined.

The Spartans (20-4-4) had s chance to win the game in the second 10-minute period of  the first overtime, but Mecaelea Lopez's penalty kick went wide left.

In fact, some onlookers on both sides were testy with the officiating, and the referee had some brief words with both sidelines.

Meanwhile, the teams played an entertaining, spirited game. The Saints came back twice to tie the game in regulation.

Lopez, Brooke Stewart and Marianna Chavez helped Orcutt Academy keep the ball for the balance for the first half and, even though the Spartans had just a lone goal by Chavez in the ninth minute, they seemed in control even though they led just 1-0 at halftime.

Hope Smith, Kira Hopkins and Grace Denton helped the Spartans' defense cover most everything the Saints tried in the first half.

The Santa Maria attack gathered steam after the break and, after Orcutt Academy goalkeeper Abigail Valencia dove for the ball in the Spartans' penalty box and missed, Isabella Medina knocked the ball home in the third minute after the break to tie the score.

The Spartans re-gained momentum on offense and went ahead again when Taylor Martinez took a pass from Lopez and scored in the 10th minute after the break.

The Saints kept at it though, and Jocelyn Santiago, after working her way free in the Spartans' penalty box, knocked in the tying goal in the 15th minute after intermission.

Goalkeepers Valencia, and Sara Rodriguez of Santa Maria helped their teams stay tied the rest of the way in regulation. Defender Sarah Barbosa bailed out the Saints in the first half by thwarting several Orcutt Academy thrusts.

Hopkins cleared a lot of balls for the Spartans in the second half of regulation.

The Saints are in the playoffs for the first the first time in recent memory.

Both squads had identical solid pitching numbers, and the teams played to a scoreless draw. The non-league game was called because of darkness.

Collection: Read recaps from a busy playoff Tuesday on the pitch, and the court

The Cabrillo nominee for the 2020 Male Athlete of the Year will attend UCLA and major in business economics, a switch from his original plan to major in physiology. 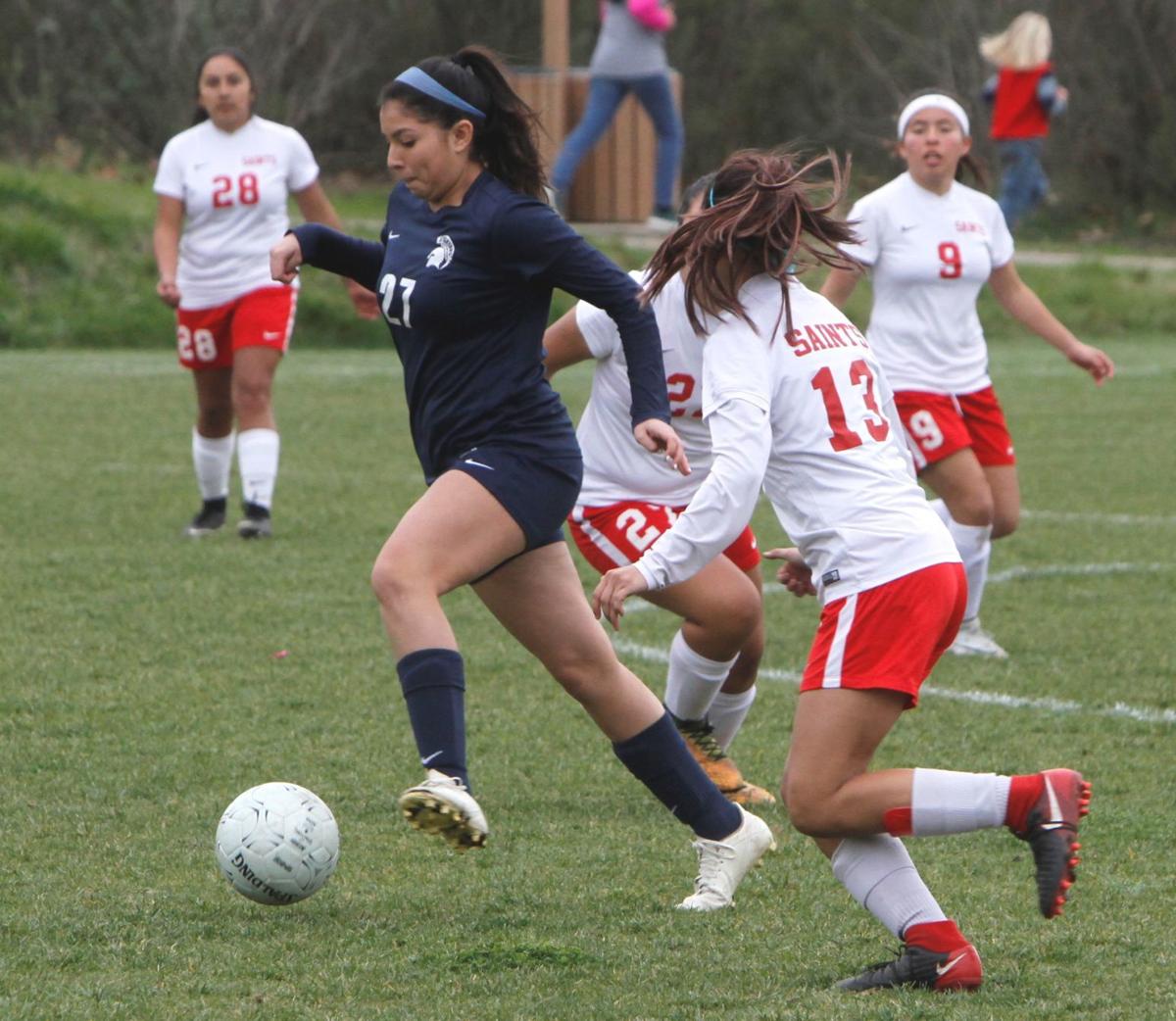 Orcutt Acadey's Mecaela Lopez navigates through traffic during Tuesday's playoff game against Santa Maria, which won the game 3-2 in overtime.