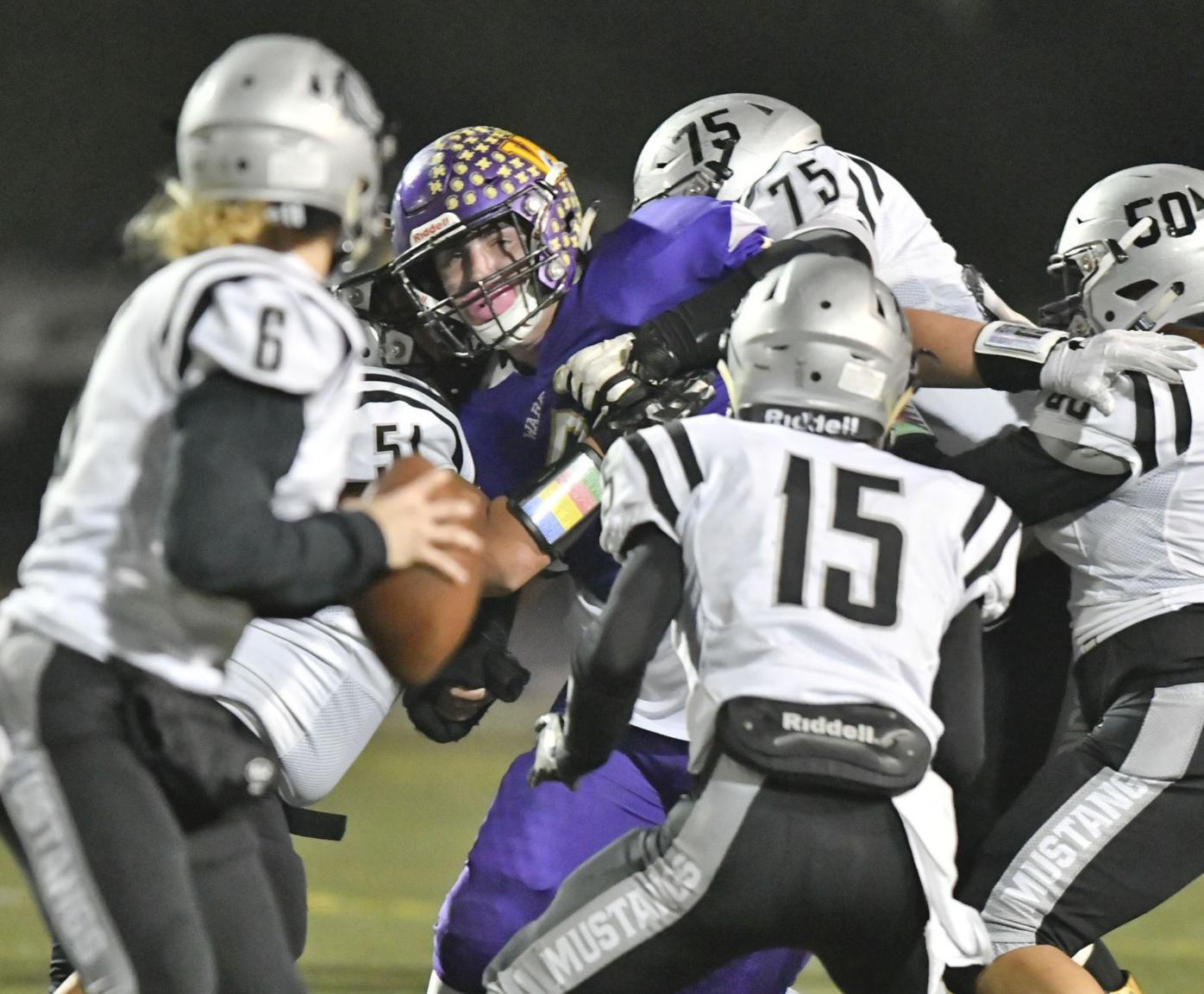 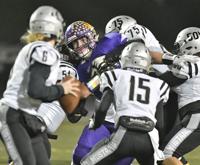 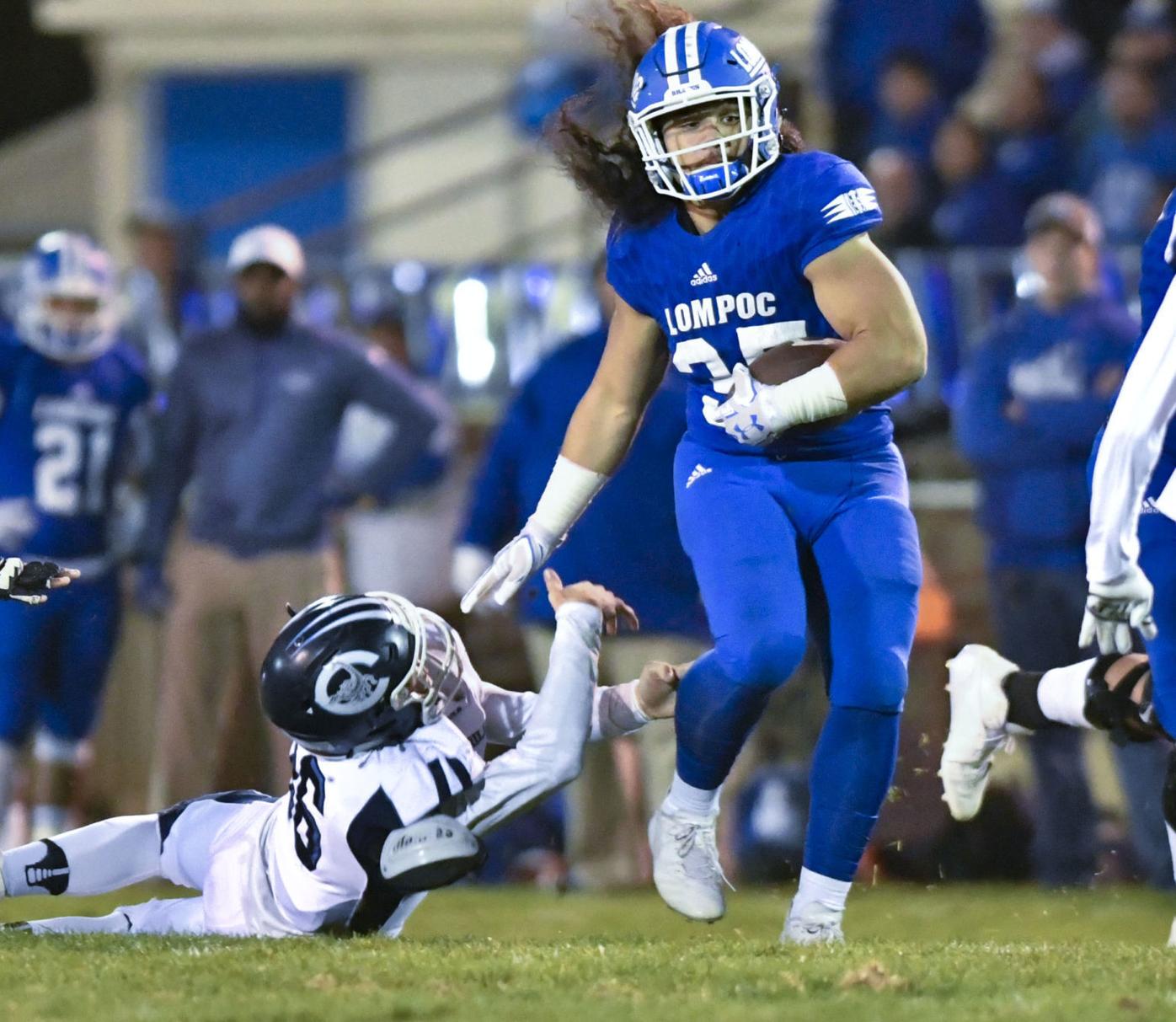 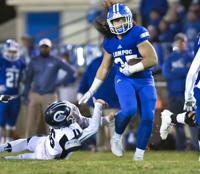 Lompoc's Toa Taua carries the ball against Camarillo during a first-round game in 2017. 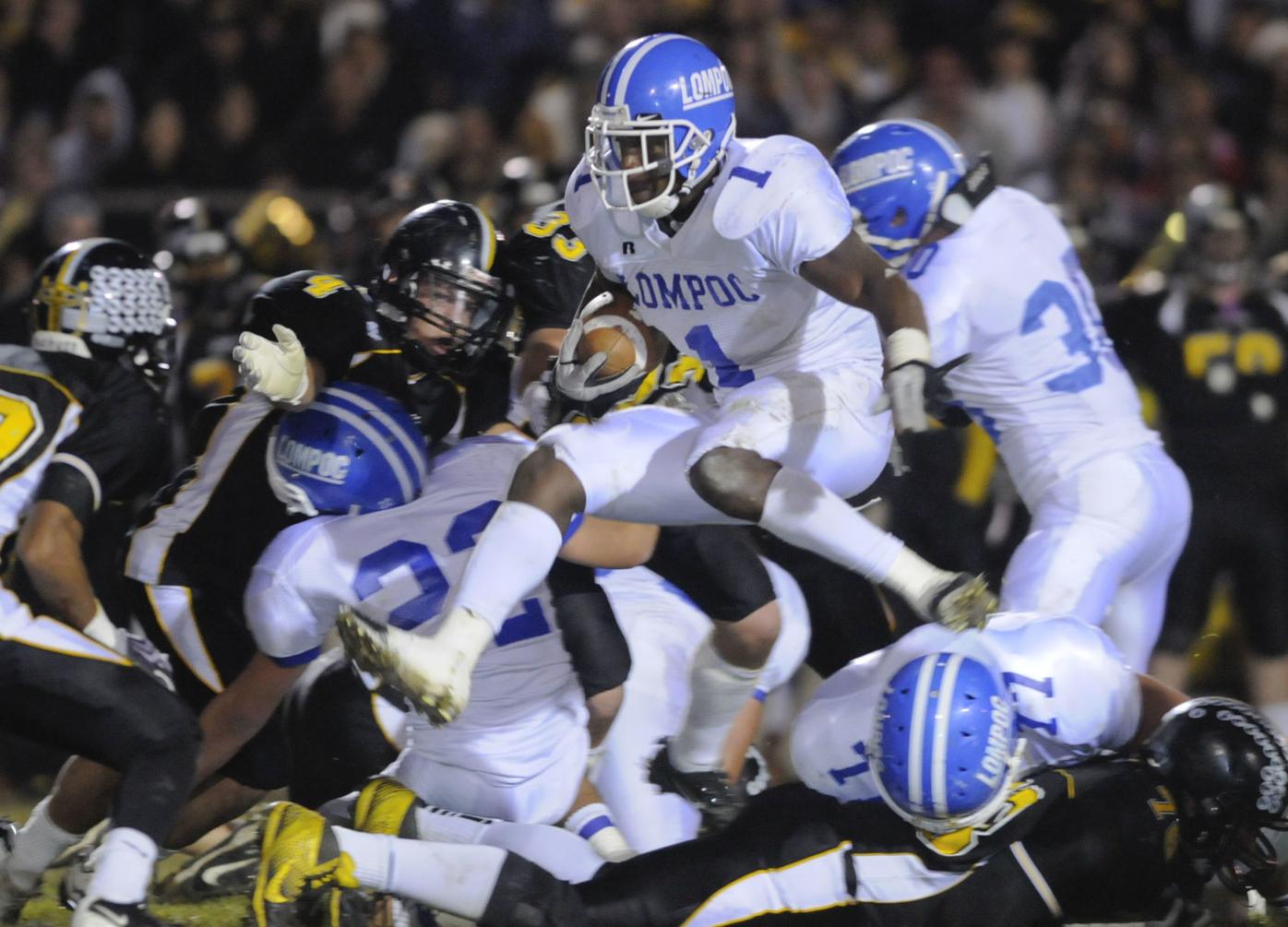 Lavon Coleman hurdles a pileup in the first quarter against Cabrillo in the CIF Southern Section Northwest Division title game in 2011 at Huyck Stadium. Coleman is the No. 2 seed for Northern Santa Barbara County. 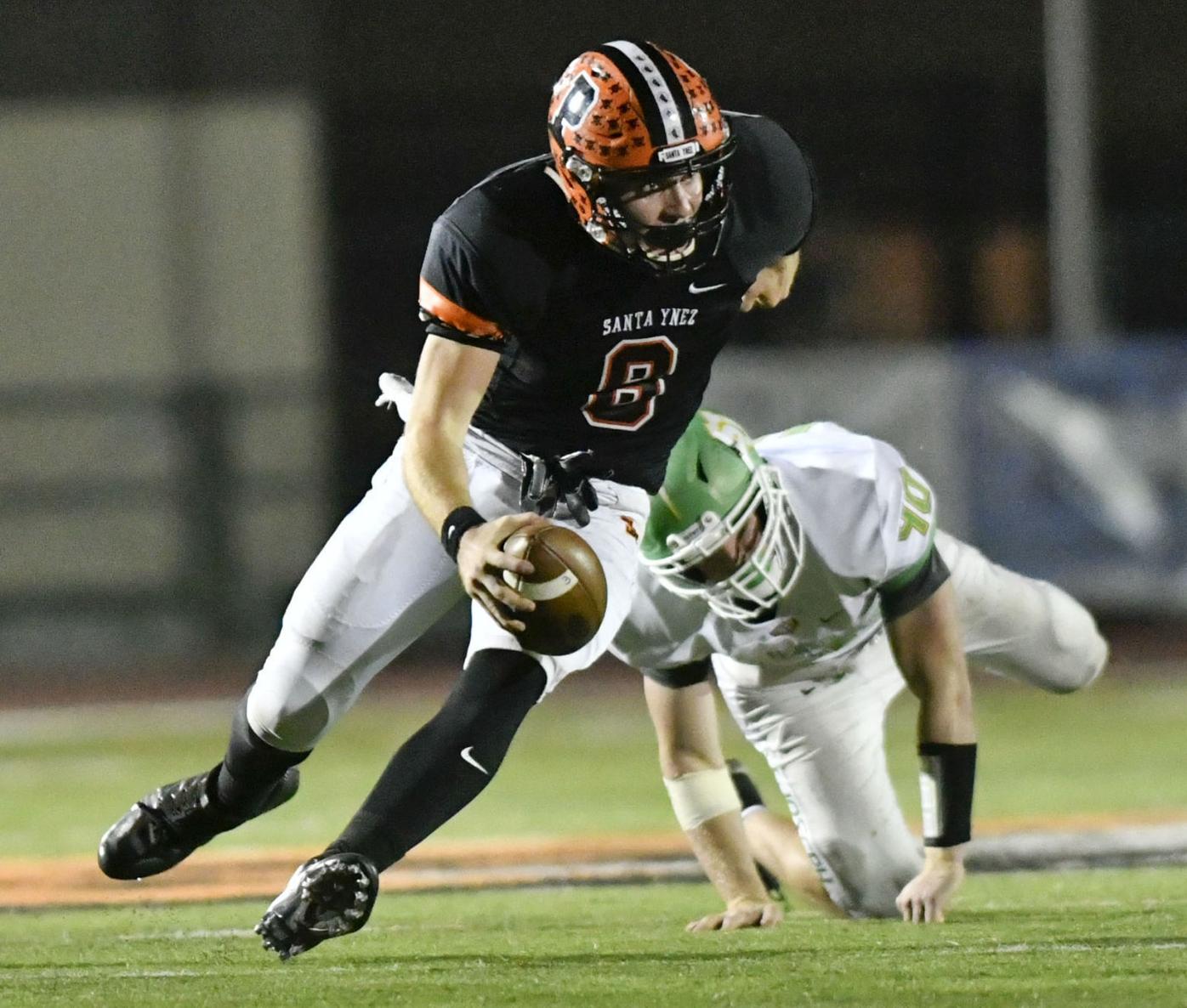 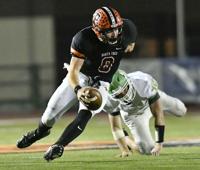 Lompoc's Toa Taua carries the ball against Camarillo during a first-round game in 2017.

Lavon Coleman hurdles a pileup in the first quarter against Cabrillo in the CIF Southern Section Northwest Division title game in 2011 at Huyck Stadium. Coleman is the No. 2 seed for Northern Santa Barbara County.

There was one minor upset in the first round as the rest went to chalk.

The Santa Maria Times is conducting its first-ever Player of the Decade poll and the first-round matchups were released last week. The sports staff at the Santa Maria Times, Lompoc Record and Santa Ynez Valley News polled area coaches to determine a list of nominees from San Luis Obispo and Santa Barbara counties.

UPDATE: Here are the vote totals for each matchup as of 3 p.m. on July 14.

Lompoc High players earned three of the eight Northern Santa Barbara County spots and two of those players have advanced to the next round.

Ainuu Taua, a former LHS defensive lineman and the No. 4 seed, was upset by Santa Ynez' Mike McCoy the No. 5 seed.

Toa Taua was the No. 1 seed for Northern Santa Barbara County. Taua edged the No. 8 seed Fenton Will, a former St. Joseph High linebacker, 382-281 to advance.

The starting lineups for the MLS match between the L.A. Galaxy and Portland Timbers were released Monday afternoon.

Lavon Coleman, who starred with the Braves before playing running back at the University of Washington, also eased into the next round with a 260-151 win over Santa Ynez graduate Gabe Prendergast.

Toa Taua and Coleman will both have their hands full in the next round.

Taua will face McCoy, who received the second-most votes of all the contenders in the opening round with 413. McCoy edged Ainuu Taua 413-316.

Coleman is set to face off against Caleb Thomas, a former Righetti lineman who is now at Tulane. Thomas cruised past his first-round opponent, former Santa Maria quarterback Blake Truhitte, the No. 6 seed, 448-168. Thomas, the No. 3 seed, received the most votes out of all first-round competitors.

Before his second coaching stint with the St. Joseph girls, Torres had a successful run with the St. Joseph boys, guiding the Knights to two sectional divisional championships. He coached the Knights for 27 combined seasons in both boys and girls basketball and won a total of seven CIF Southern Section championships (five in girls and two in boys) and two CIF state titles in girls basketball.

Eight nominees were chosen from each Northern Santa Barbara County and all of San Luis Obispo County. The SLO County first-round winners will be announced Thursday at 5 p.m. as that contest is still live.

The eventual champion from each area will square off to determine the Central Coast Player of the Decade.

The Northern Santa Barbara County matchups will go live online Wednesday. Vote at santamariatimes.com; lompocrecord.com and syvnews.com. The votes from each site will be combined to determine the winners.

Arroyo Grande graduate Seth Jacobs is the No. 1 seed.

Jacobs, who went on to play linebacker at Oklahoma State, will face the No. 8 seed Nick Kimball, a former Nipomo High standout. Kimball played at Hancock College and the University of LaVerne.

Jacobs had an all-around standout career at Arroyo Grande, playing some quarterback, running back, receiver, linebacker and safety. He scored 22 career touchdowns while also making 344 total tackles with eight interceptions.

Kimball, the 2014 All-Area MVP, caught 31 touchdown passes over his final two seasons at Nipomo, with 21 of those coming in 2014 when the Titans won a CIF Southern Section title.

Jacobs led Arroyo Grande to its most recent CIF title, a Western Division championship in 2011.

Player of the Decade: Seth Jacobs vs. Nick Kimball

Vote on all three sites

Raw vote totals from all three sites will be combined and counted to determine winners. (Don't focus on the percentages).

Mission Prep grad Patrick Laird, who also grew up in Arroyo Grande, is the No. 2 seed.

Laird piled up 4,551 rushing yards in his days with the Royals, scoring 50 touchdowns on the ground. He had 3,117 yards and 32 touchdowns as a senior in 2013. He walked on at Cal and made the team, eventually topping 2,000 career rushing yards with the Golden Bears. He is currently in the NFL as a running back with the Miami Dolphins. He scored a rushing touchdown last season, the only player from the area to score an NFL touchdown last decade.

Laird will go up against No. 7 Emilio Corona, a 2020 graduate of San Luis Obispo High. Corona, a quarterback, led the school's recent resurgence, capturing 18 wins over two seasons.  Corona accounted for 81 touchdowns over his final two campaigns.

No. 3 Bradley Mickey vs. No. 6 Matt Albright

Arroyo Grande grad Bradley Mickey is the No. 3 seed.

Mickey is currently a defensive back at Cal Poly. He was named the 2015 All-Area MVP as a two-way star with the eagles. He rushed for more than 1,200 yards and topped 1,100 receiving yards while also intercepting 21 passes on defense with 205 total tackles in his varsity career. He scored 31 total touchdowns and accumulated nearly 2,500 all-purpose yards.

Mickey will square off with the No. 6 seed Matt Albright, Nipomo's former quarterback.

Albright had two dynamic seasons at QB for the Titans, helping them win a CIF title in 2014 with Kimball at receiver. Albright threw 62 touchdowns in his junior and senior seasons, topping 5,600 yards. He was named Northern League MVP in 2014 and landed All-CIF honors.

Albright's resume: 62 career TD passes, 20 career INTs; Threw for 5,672 yards in two seasons; completed over 60% of passes (423 for 700); Northern League MVP in 2014. Won CIF title with Nipomo. Played at Hancock College and the University of LaVerne.

No. 3 Bradley Mickey vs. No. 6 Matt Albright

No. 4 Bailey Gaither vs. No. 5 Garrett Owens

Former Paso Robles great Bailey Gaither is the No. 4 seed. Gaither caught 41 touchdown passes with the Bearcats and also led that team to a CIF title in 2014 (where they beat Mickey's Eagles in the semifinals). Gaither has gone on to play at San Jose State, where he has over 1,500 receiving yards with the Spartans.

Gaither will face off with former Arroyo Grande standout Garrett Owens, who was a standout receiver and defensive back while also becoming one of the greatest placekickers the area has ever seen.

Owens topped 1,300 receiving yards while also making 160 total tackles and intercepting 10 passes for the Eagles. He also handled all kicking and punting duties there. He went on to play at Oregon State, where he became the Beavers' starting kicker. He transferred to Iowa State as a senior and earned the starting role there, too, making 17 field goals in his final college season.

No. 4 Bailey Gaither vs. No. 5 Garrett Owens

Vote on all three sites

Raw vote totals from all three sites will be combined and counted to determine winners. (Don't focus on the percentages).

The sports staff at the Santa Maria Times, Lompoc Record and Santa Ynez Valley News is looking for the top football player from Northern Santa Barbara County and San Luis Obispo County over the last 10 seasons of high school ball.

See who our nominees are thus far.

San Luis Obispo's football team went 2-18 in the two seasons before Emilio Corona took over the quarterback position in 2018.

Football players can put up some staggering statistics at the high school level. Often times a star running back also doubles as his team's to…

Player of the Decade: Bailey Gaither is among Central Coast's greatest receivers

Surely Bailey Gaither loves his hometown of Paso Robles, but it looks like San Jose is growing on him as well. After all, Gaither is entering …

Player of the Decade: A look back at Caleb Thomas' days of dominance at Righetti

Garrett Owens was a solid offensive player during his days at Arroyo Grande High.

Player of the Decade: Toa Taua put together historic career at Lompoc High

Anyone who flips on Toa Taua's freshman highlight tape at Lompoc High will see a No. 35 in blue that does not look or play like a freshman.  F…

Player of the Decade: A look back at Fenton Will's stellar career in the middle of St. Joseph's defense

Fenton Will was a highly-skilled football player during his days at St. Joseph.

Every once in a while, a special type of player comes around.

The physical tailback known for his punishing running style once declared himself the 'YAC President' during his days at Lompoc High. He made …

Tom Goossen, who coached Arroyo Grande's football team to a CIF Southern Section title in 2011, once said Seth Jacobs would probably be his te…

“I had a stress fracture my freshman year,” so that cancelled her potential first collegiate track season after what she described as a successful initial collegiate cross country campaign.

"I feel good about the military aspect. It’s always good to give back to the country I live in," Langley said. "A lot of my dad's side has been in the Army so I am a little familiar."