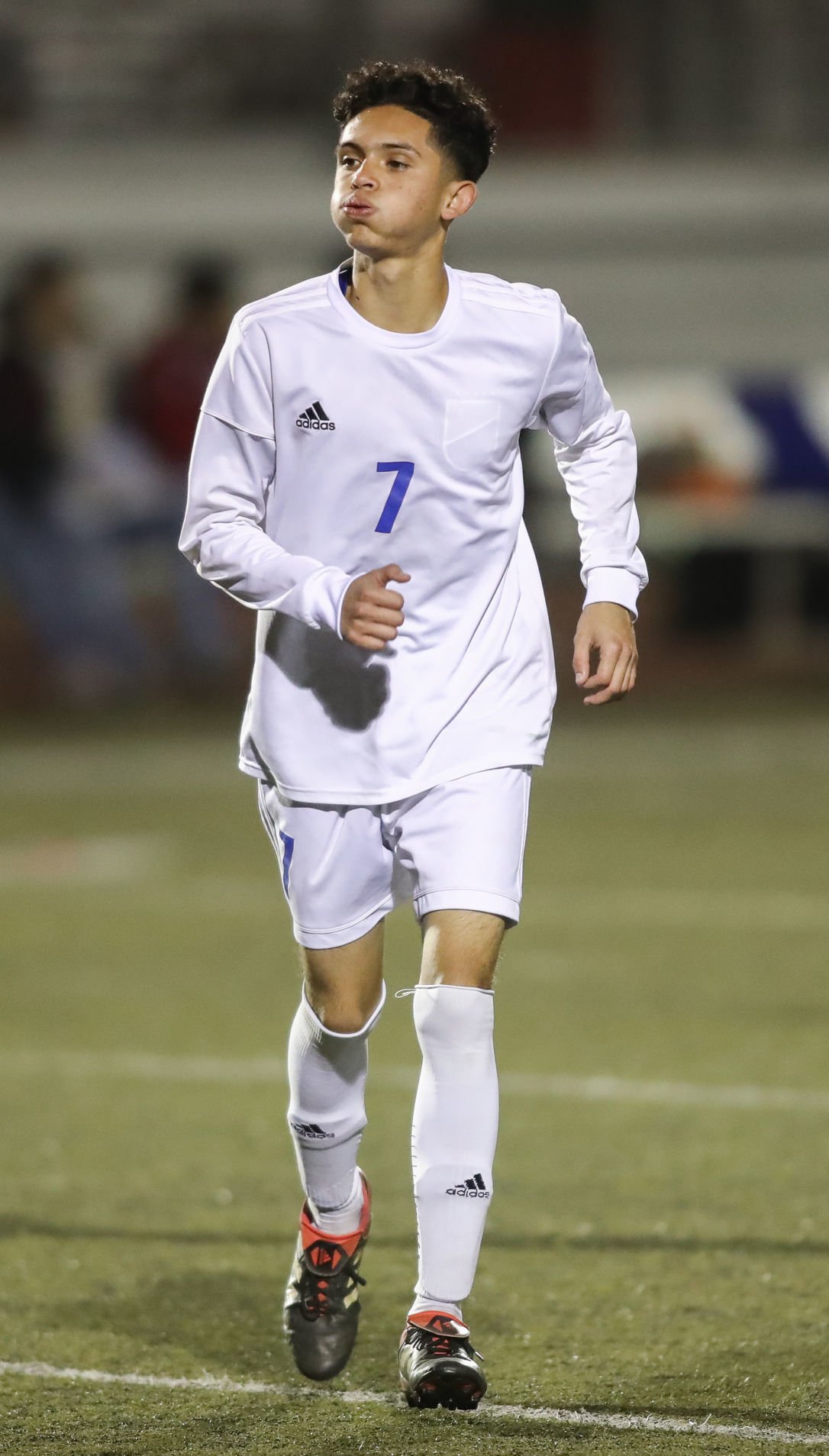 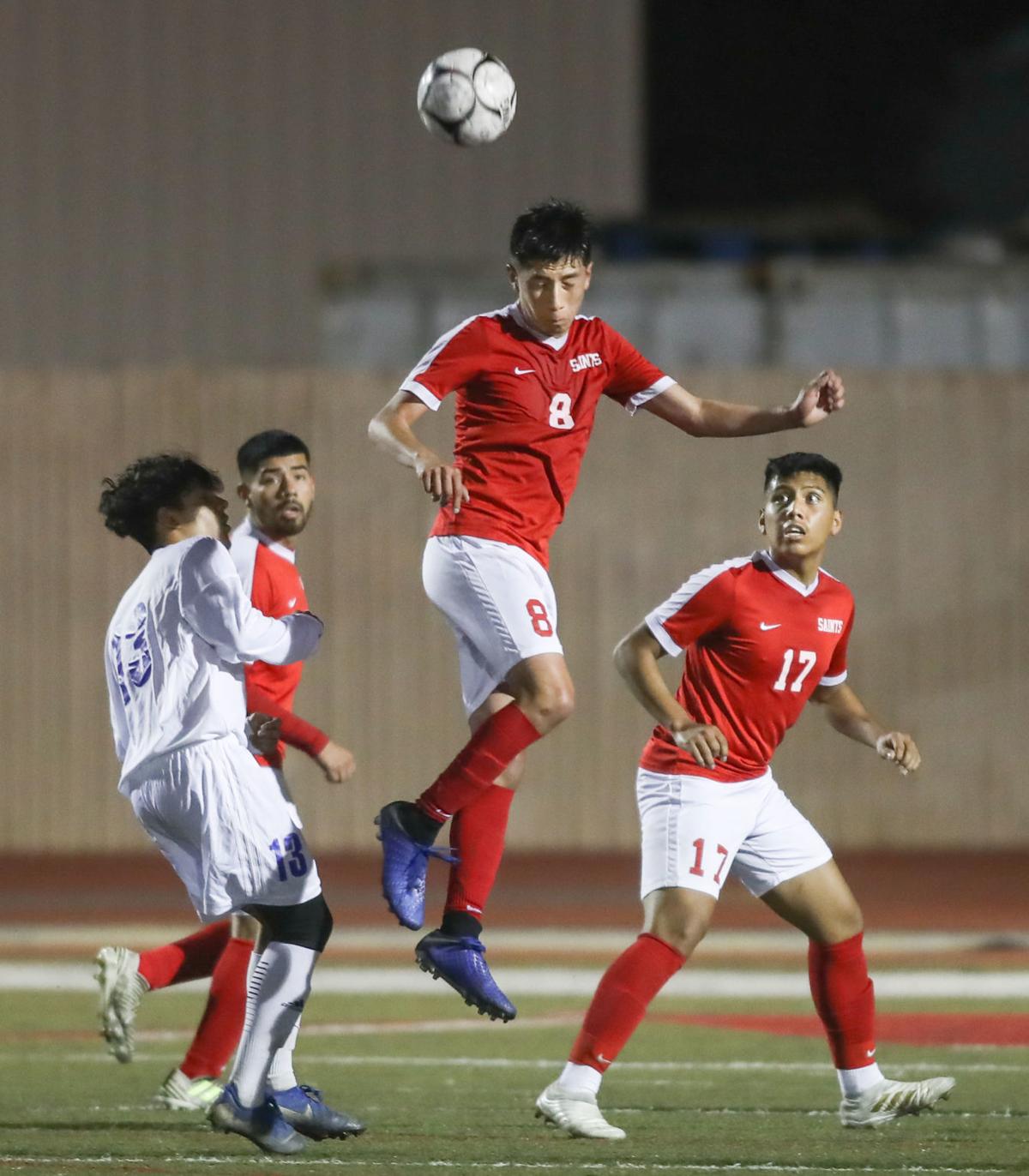 Roman Gutierrez elevates to head the ball during a soccer game in Santa Maria Thursday night. Lompoc scored two goals in the first half and Santa Maria scored twice in the second for a 2-2 draw in a non-league game. 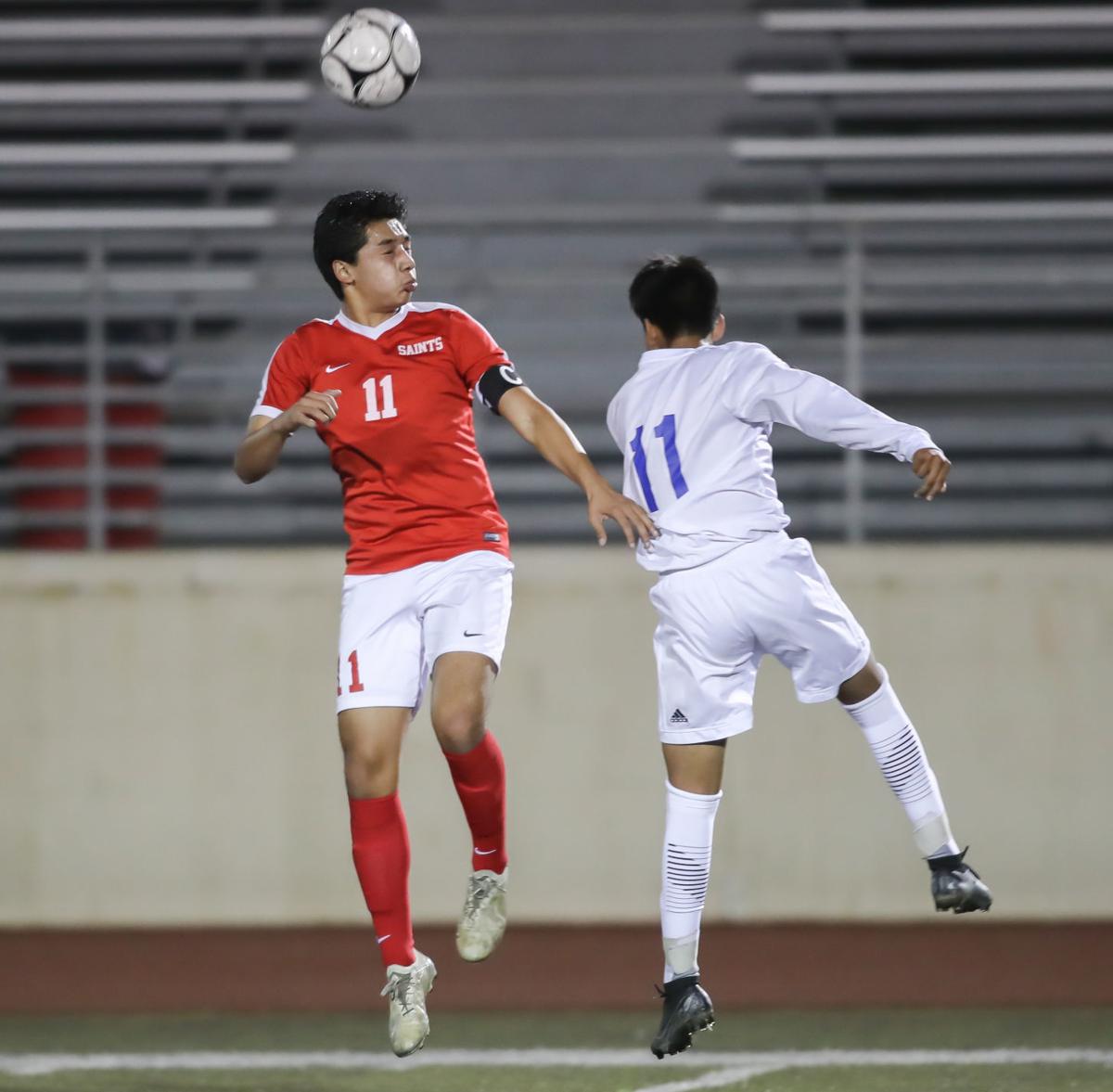 Gilberto Gomez of Santa Maria heads the ball away from Erick Jimenez during a soccer game in Santa Maria on Thursday night. 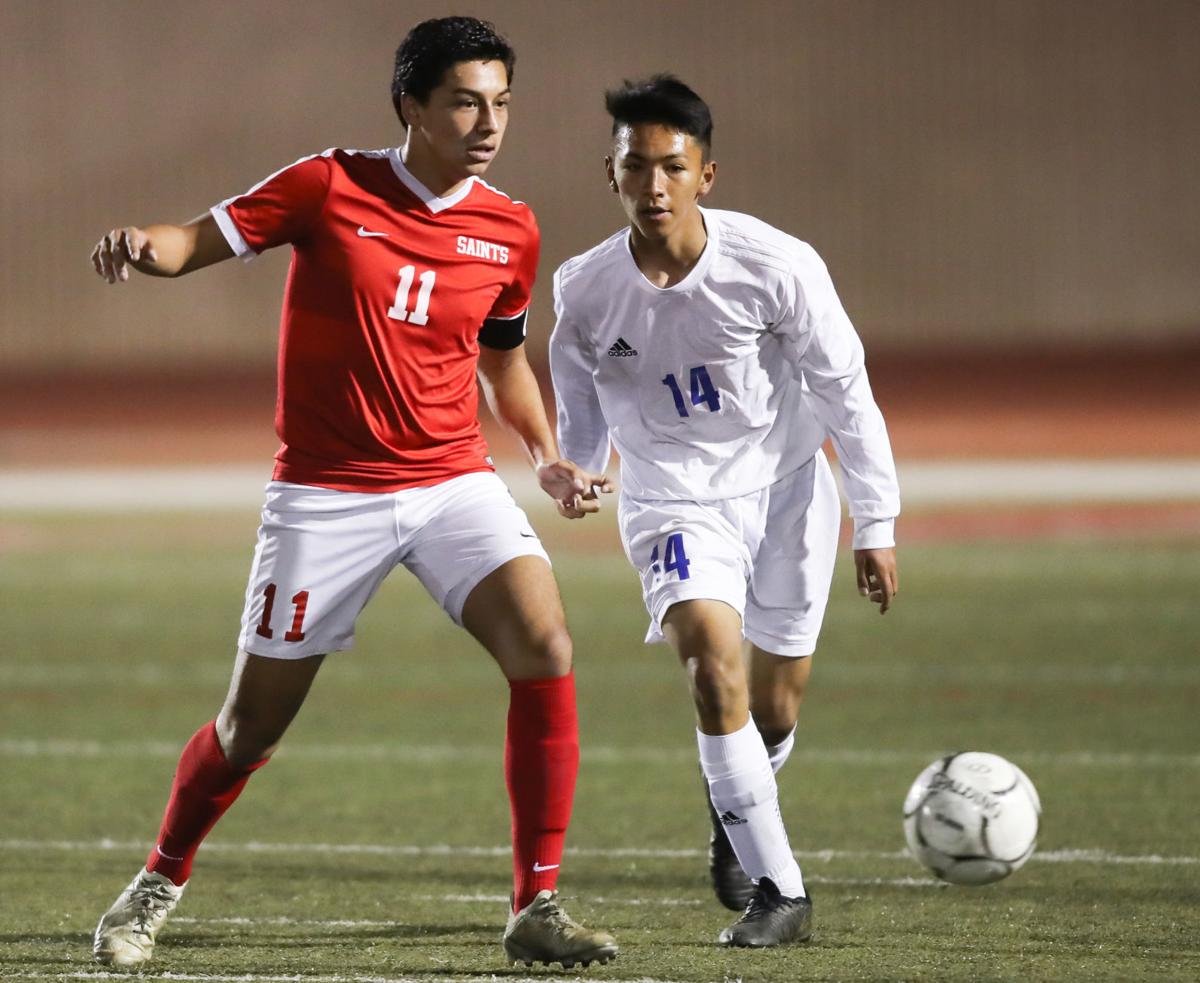 Gilberto Gomez of Santa Maria battles Lompoc's Juan Gutierrez for the ball during a soccer game in Santa Maria.

The first Santa Maria try on its possession in the 17th minute of the second half hit the right goal post.

The Lompoc defense blocked the second.

Roman Gutierrez knocked the third try into the net. Gutierrez’s third-chance goal finished the scoring, and the Saints salvaged a 2-2 tie with the Braves at Santa Maria’s Ralph Baldiviez Stadium Thursday night.

The cross-sectional game featured two teams who are typically among the top boys soccer squads in the area.

Photos: Lompoc and Santa Maria battle on the soccer pitch

“I know it’s early in the season, but I have to take my hat off to (our) guys for the effort they gave in the second half,” said Santa Maria coach Eduardo Cuna.

The veteran Santa Maria coach was not nearly as happy with how his team played in the first half.

The Saints offense often looked disjointed before the break, and Alfredo Botello, with his ball-handling, helped along a Braves offense that gathered steam as the first half went along.

Lompoc’s Victor Mendez popped free twice, and he capitalized both times. Mendez scored in the 27th minute and again in the 29th.

“We came out a little flat,” Cuna said.

“We did not completely execute on two opportunities we had in the first half. Lompoc has two chances, and (Mendez) put them in."

The Santa Maria offense carried the attack from the outset in the second half.

The Saints got deep in the Lompoc end in the 12th minute after the break. Nathan Chavez put in a rebound shot to get his team on the board.

Santa Maria had two near misses after Gutierrez tied the game. One Saint shot hit the right post. Back-up Lompoc goalie Gio Cortez knocked away a promising-looking try on another.

Moments after Gutierrez tied the score, a Braves left-to-right shot missed by inches in the last few minutes. Cortez came in for starter Alejandro Lopez, who suffered an injury late in the second half.

Cortez seemed to suffer an injury himself later, and field position player Alberto Mendoza Alvarez moved to goalie as the Saints were preparing a free kick, and that left the Braves a man down on the pitch.

“In the second half, we created more shots,” said Cuna.

“That’s what we’re about,” said Cuna. “Controlling possession and creating shots. The more you have the ball, the less the other team has to score on you”

Both games are non-league ones.

The St. Joseph Knights evened their record at 1-1 with a shutout at home over the Nipomo Titans.

Freshman Zorah Coulibay had two of the Knights’ three goals, scoring in the 32nd minute off a Janelle Brickey assist and in the second half off an Avery Nelson assist.

Kaihla Lopez put the Knights’ second score into the net in the 35th minute off a Cali Griffin assist.

Garcia is also coaching the girls’ junior varsity team and had to travel to Nipomo High for their game, a 5-1 win, before heading back to Orcutt to coach the varsity game.

The Knights are back on the field Monday at home against Mission Prep.

The Pioneer Valley Panthers (4-0) put in a strong defense effort keeping the St. Joseph Knights from getting any shots on goal during a crosstown rivalry match.

"They only got off one shot at the goal but it wasn't on goal so our goals keepers had no saves in the game," said Pioneer Valley coach Alan Brafman. "We didn't have may shots either but we got two to go in.

Christian Aparacio scored both Panther goals, with an unassisted goal in the 17th minute and a shot off a pass from Nick Tello in the 39th.

George Mendez manned the goal in the first half. Alexander Lara took over in the second.

Pioneer Valley plays two games in Visalia next Tuesday, against Golden West at 11 a.m. followed by El Diamante at 2 p.m.

The Pioneer Valley girls are also scheduled to play the same schedule on Tuesday.

The Titans moved to 2-0 on the season with a win at Paso Robles Thursday night.

The Pirates previously topped the Dragons 15-9 last Monday and followed that up with a 17-1 win over Lompoc on Tuesday. The first two games were at the Santa Ynez High pool.

Roman Gutierrez elevates to head the ball during a soccer game in Santa Maria Thursday night. Lompoc scored two goals in the first half and Santa Maria scored twice in the second for a 2-2 draw in a non-league game.

Gilberto Gomez of Santa Maria heads the ball away from Erick Jimenez during a soccer game in Santa Maria on Thursday night.

Gilberto Gomez of Santa Maria battles Lompoc's Juan Gutierrez for the ball during a soccer game in Santa Maria.