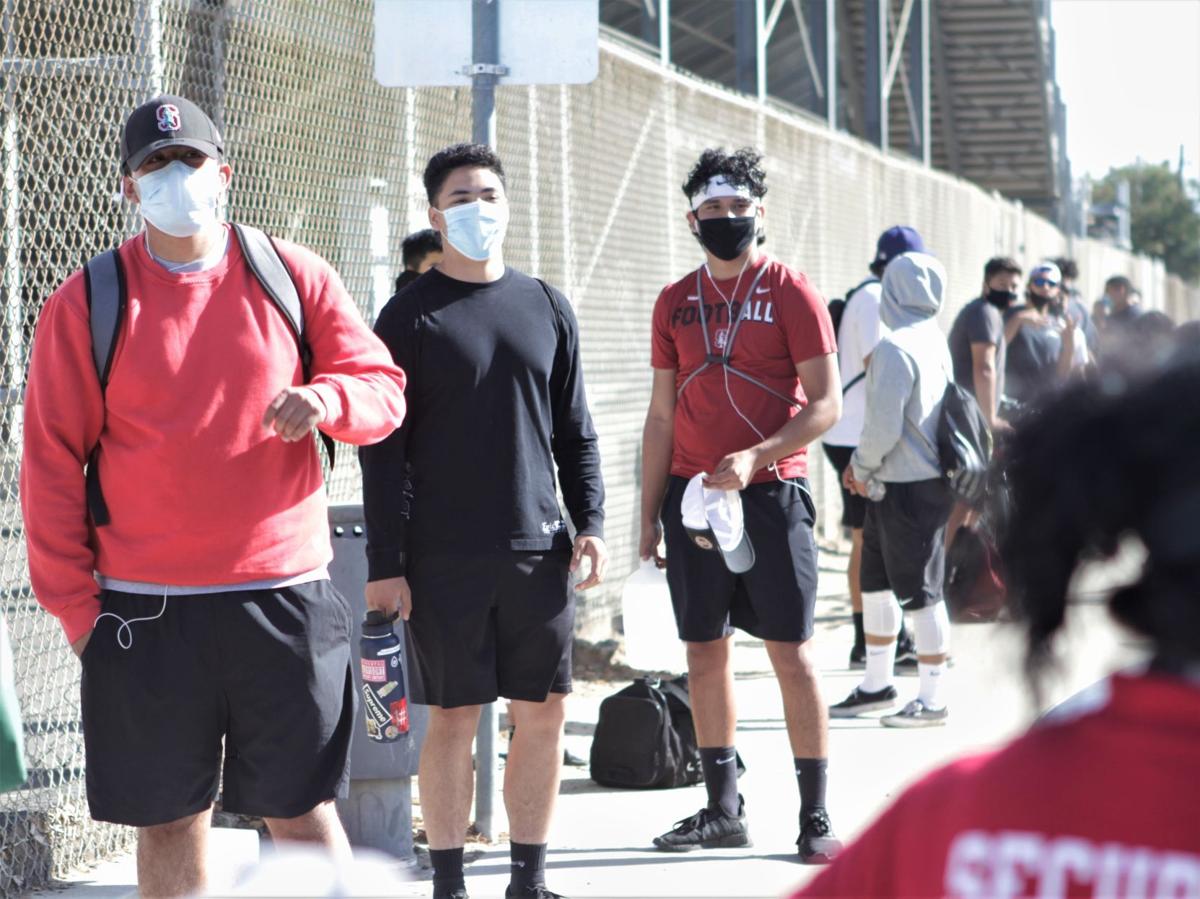 Santa Maria High School football players wait to be admitted into the stadium for their physical conditioning session Friday afternoon. Santa Maria, Pioneer Valley and Righetti wrapped up their first week of conditioning drills Friday, the first such athletic activities on campus since the COVID-19 pandemic canceled the spring sports season in March. 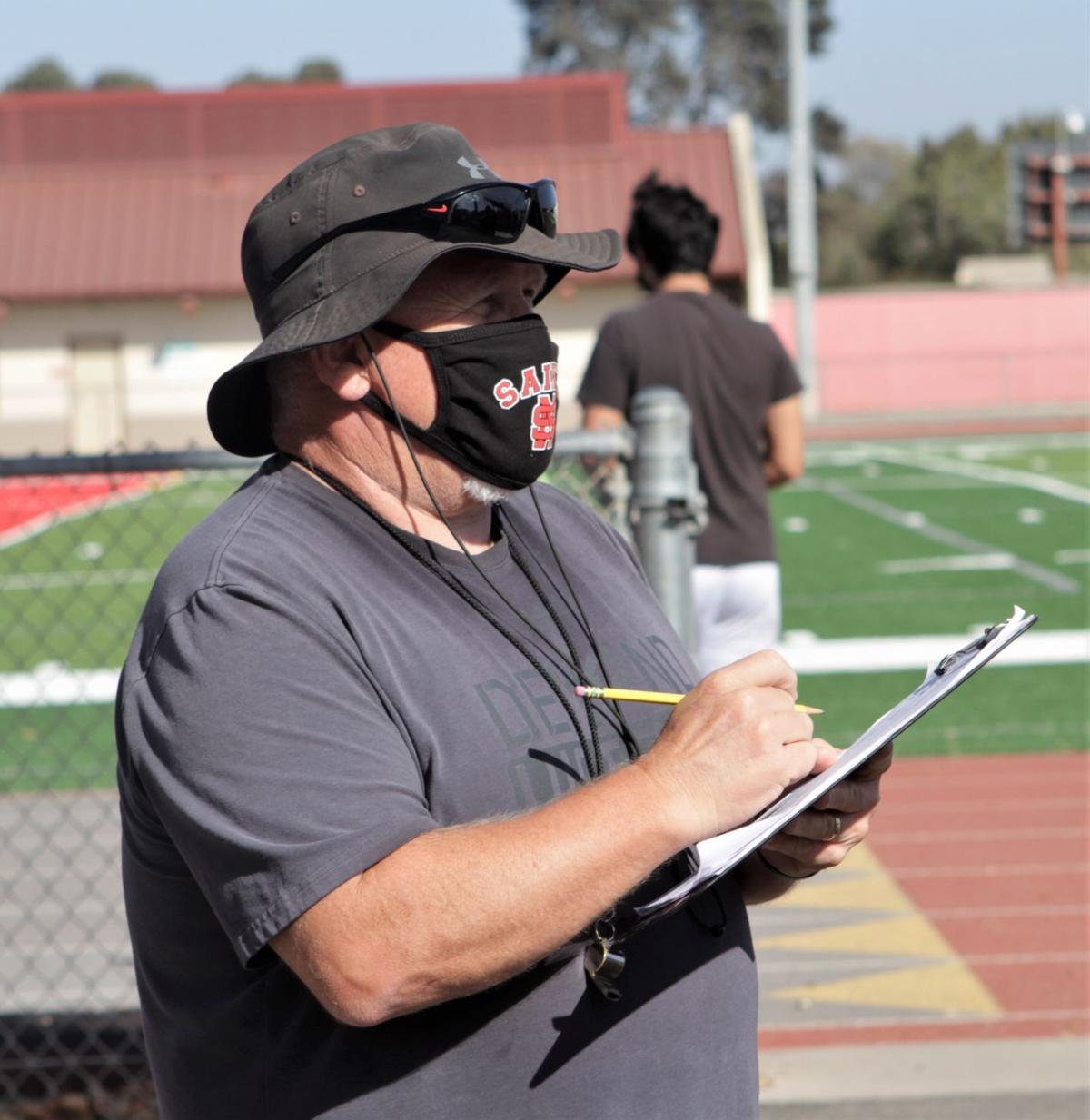 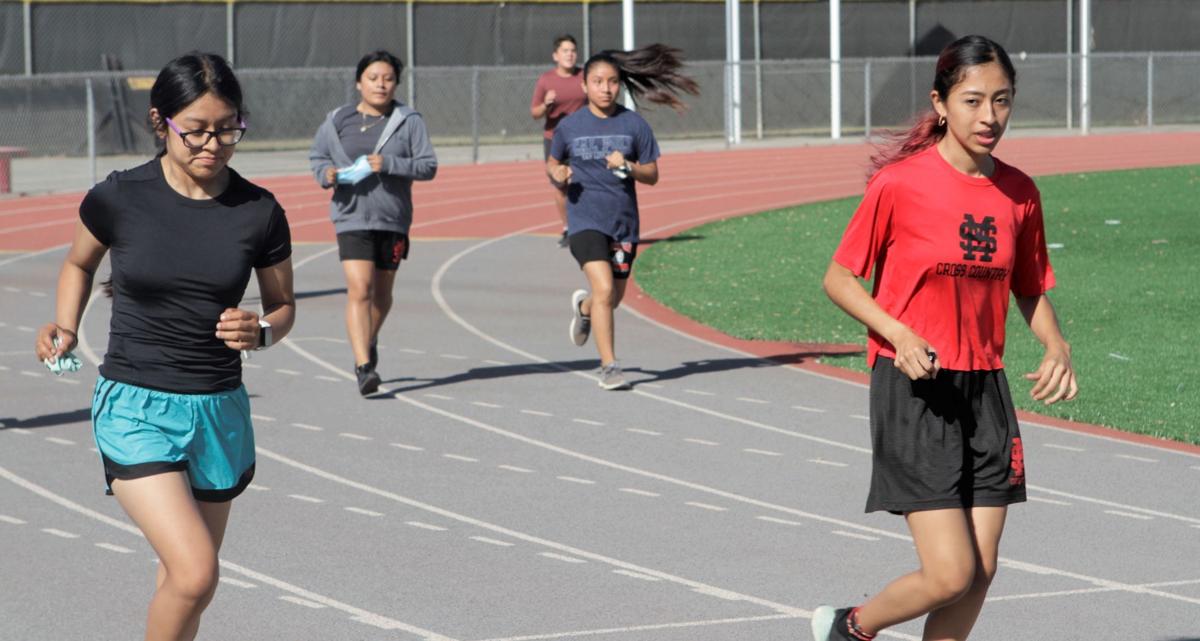 Though they were sandwiched between reminders of the new normal, high school athletes in the Santa Maria Valley had a few moments of the old normal this week.

Santa Maria Joint Union High School District welcomed student-athletes back to campus for the first time since the spring sports season was suspended and eventually canceled in March due the coronavirus pandemic.

On a warm Friday afternoon at Santa Maria High School, students lined up near the entrance behind the football stadium on Thornburg Street. They were asked several questions, such as if they've had any symptoms of COVID-19 or had been around anyone experiencing COVID-19 symptoms or had a positive diagnosis over the last 14 days. Students then had their temperatures checked before entering.

But once on the field or the track, the athletes had a few moments of normalcy. Cross country runners jogged and talked with friends during the picture-perfect afternoon under the Santa Maria sun. Football players laced up their cleats on the school's newly refurbished football turf and got to work.

Though not everything was normal.

All students had to wear their masks upon entering and could only remove them while training. Wallace, who is also the school's cross country coach, had about 40 of his runners in attendance Friday while the Saint football team had about 40 varsity athletes on hand.

The students were kept in small pods to minimize spread of the coronavirus. The athletes will continue working within the same pods for extended periods of time.

Just being outdoors was a clear benefit, Diaz said.

"What I like about it is seeing the joy on the kids' faces just to be back doing something," the assistant principal said. "The kids really want a sense of normalcy so it's good to watch them and come back. They're a little happier, they're happy in their pods. It's working out great for us.

"We understand that it's different and we are trying to make this easy and a friendly atmosphere for the kids. Every area has the same protocols going, so we're doing this all over the school."

Ellington's main focus was getting his players' blood pumping.

"It's all about agility and getting them back into the motions of running and getting out here," Ellington said. "We're doing a little bit of football stuff. There's no equipment or anything like that. It's just nice to see people out here and have some type of normalcy, you know what I mean?

Ellington did say he felt the kids were "a little more out of shape" than they'd be coming out of a normal offseason period, which is understandable due to a mix of lockdown or quarantine orders over the last six-plus months.

"It's been a rollercoaster, just in life in general," Ellington said. "You hope that things get better, then you realize that they're not, then you get your hopes up and then back down. It's a rollercoaster. You don't want to get too high because things could get shut down at any moment. But at the same time we are excited. I'm trying to be level and focus on the time we have now."

Santa Maria High School football players wait to be admitted into the stadium for their physical conditioning session Friday afternoon. Santa Maria, Pioneer Valley and Righetti wrapped up their first week of conditioning drills Friday, the first such athletic activities on campus since the COVID-19 pandemic canceled the spring sports season in March.