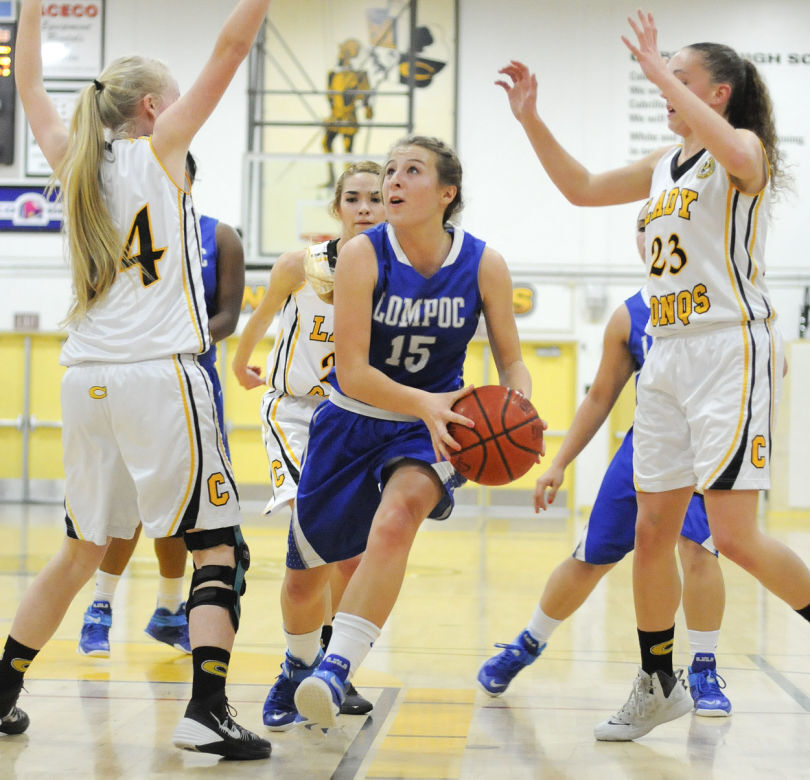 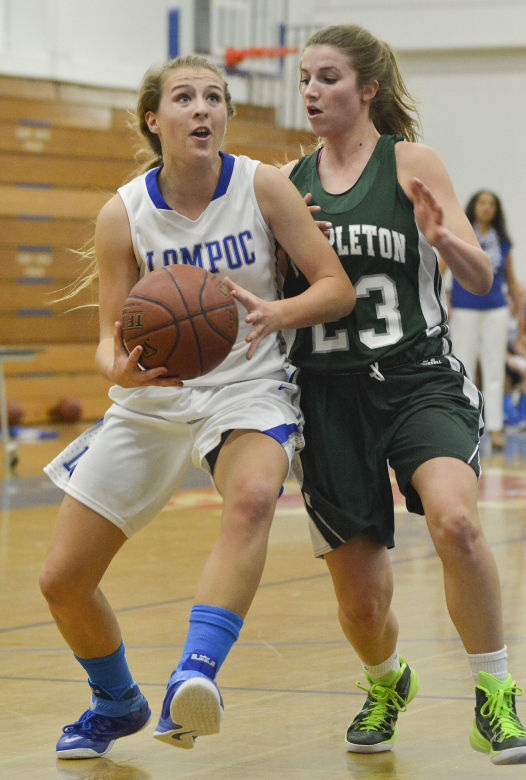 Lompoc's Rylee Sager goes up for a shot past Templeton's Annie Elterman during a Los Padres League girls basketball game at Lompoc High in January of 2015. 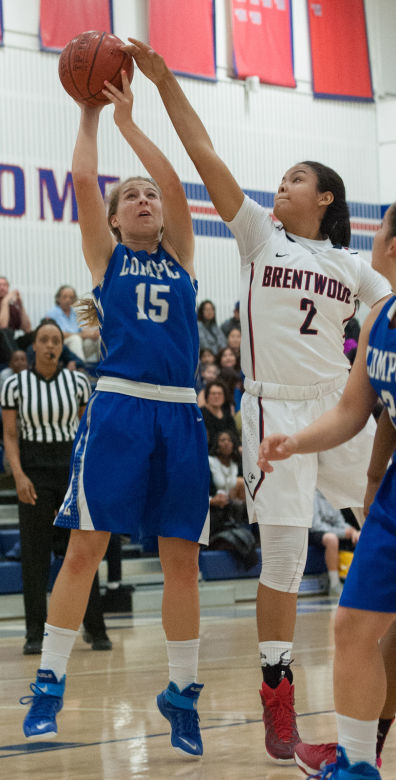 Lompoc’s Rylee Sager tries to put the ball up past Brentwood’s AJ Simmons during the Feb. 25, 2015 playoff game at Brentwood.

Just about every other Player of the Decade nominee claims basketball as their best sport. Actually, for most, basketball is their only sport.

Sager also landed All-CIF recognition in both basketball and softball, a feat not many athletes achieve. For her work on the hardwood, Sager is a Player of the Decade nominee.

The 5-foot-7 guard was a contributing player at Lompoc High as a freshman and an impact player every year thereafter. She was durable, playing in 107 games in four years, and productive, scoring 1,104 points in that span. But, unsurprisingly, Sager was a versatile basketball player just as she was a versatile athlete.

Sager was probably Lompoc's best scorer, defender and rebounder every time she stepped on the court. In addition to scoring over 1,100 points, she also secured over 700 rebounds, assisted on over 300 baskets and swiped more than 300 steals.

Sager helped guide the Braves to the CIF Southern Section Division 4AA semifinals as a senior, where they lost 43-42 to Duarte. Sager led that 2015-16 team in scoring and assists, and was second in rebounding and steals.

Sager earned All-CIF Southern Section honors in basketball in 2014-15 and 2015-16 and led the Braves to three straight LPL championships. She was named the Northern Santa Barbara County Athletic Round Table Athlete of the Year in 2016.

In all, Sager played four years of softball and basketball and two years of both golf and cross country for the Braves and was an eight-time First Team All-League pick. She also earned 12 varsity letter scholar-athlete awards during her four years at LHS. She helped the Braves win a CIF-SS title in softball as a senior.

After high school, Sager walked on to the softball team at Sacramento State, where she wrapped up her athletic career earlier this year after the season was scrapped due to the coronavirus pandemic.

“My story is about never giving up on yourself. People start giving up because they fear regrets," Sager told the Times earlier this year. "For me, regret is the act of giving up. Life is about believing in your aspirations so heavily that you will do whatever it takes to get it. My advice for people is to follow your dreams and don’t let fear get in the way. From my hustle, grind and sacrifices, I never gave up on myself, and for that, I wouldn’t be where I am today.”

The 16th and final Player of the Decade nominee will be announced Saturday before a tournament-style voting contest will be held to determine the girls basketball Player of the Decade. Readers will be able to vote online at santamariatimes.com; lompocrecord.com and syvnews.com. Players from Northern Santa Barbara County and Southern San Luis Obispo County whose final seasons where in between 2009-10 and 2019-20 are eligible.

Vreeland recorded 109 total tackles as a sophomore in 2015, then added 115 total tackles the following year before closing out his varsity career with a 106 tackle effort as a senior in 2017.

The Other Guys: Scotty Cusack was lightning in a bottle

Cusack never topped 1,000 yards rushing in a single season during his three-year varsity career at St. Joseph. Nevertheless, just by watching him play, you'd see he was one of the best the Central Coast had seen over the last decade.

Lompoc's Rylee Sager goes up for a shot past Templeton's Annie Elterman during a Los Padres League girls basketball game at Lompoc High in January of 2015.

Lompoc’s Rylee Sager tries to put the ball up past Brentwood’s AJ Simmons during the Feb. 25, 2015 playoff game at Brentwood.