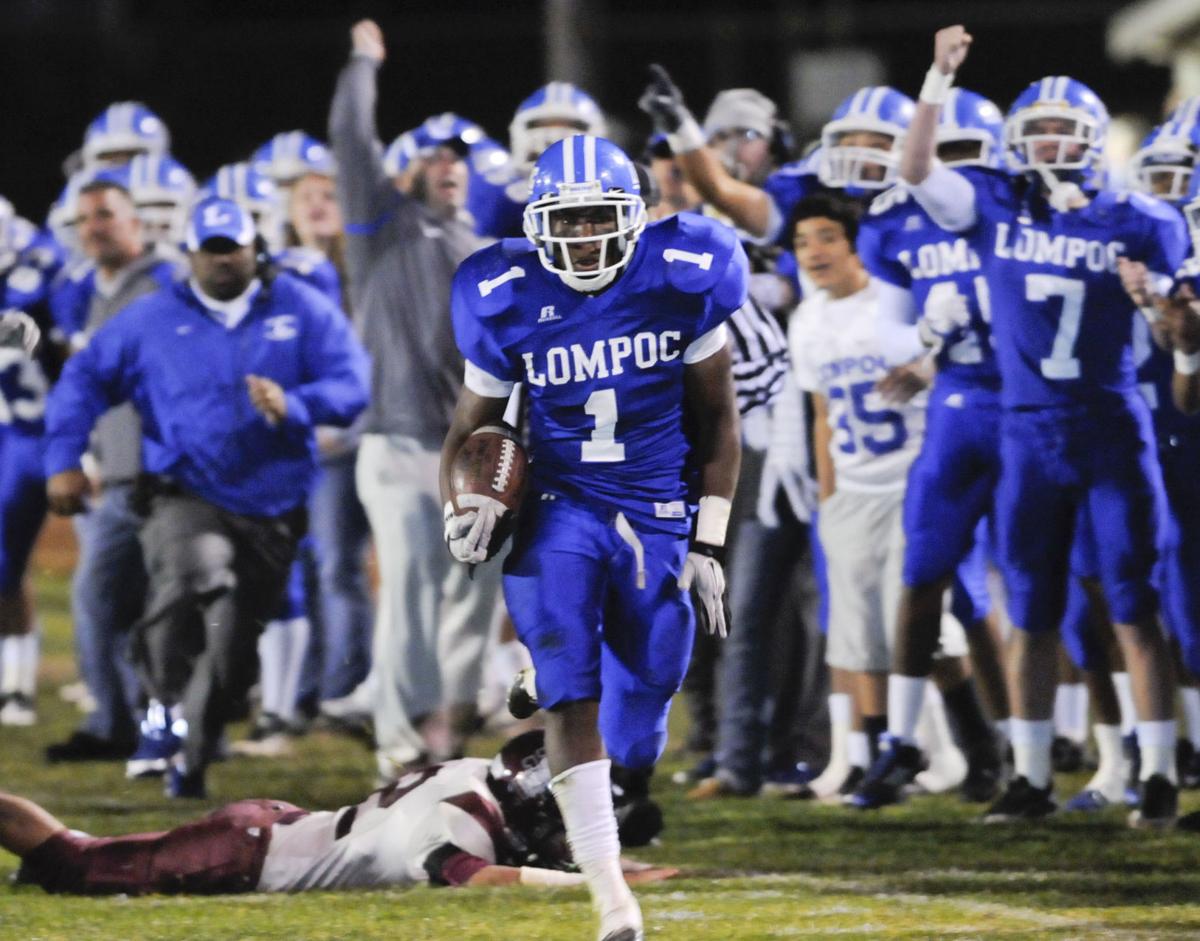 Lavon Coleman of Lompoc takes off on a long touchdown run in the first half as the Braves' sideline celebrates in the CIF Southern Section Northwest Division semifinal game against Torrance on Dec. 2, 2011. 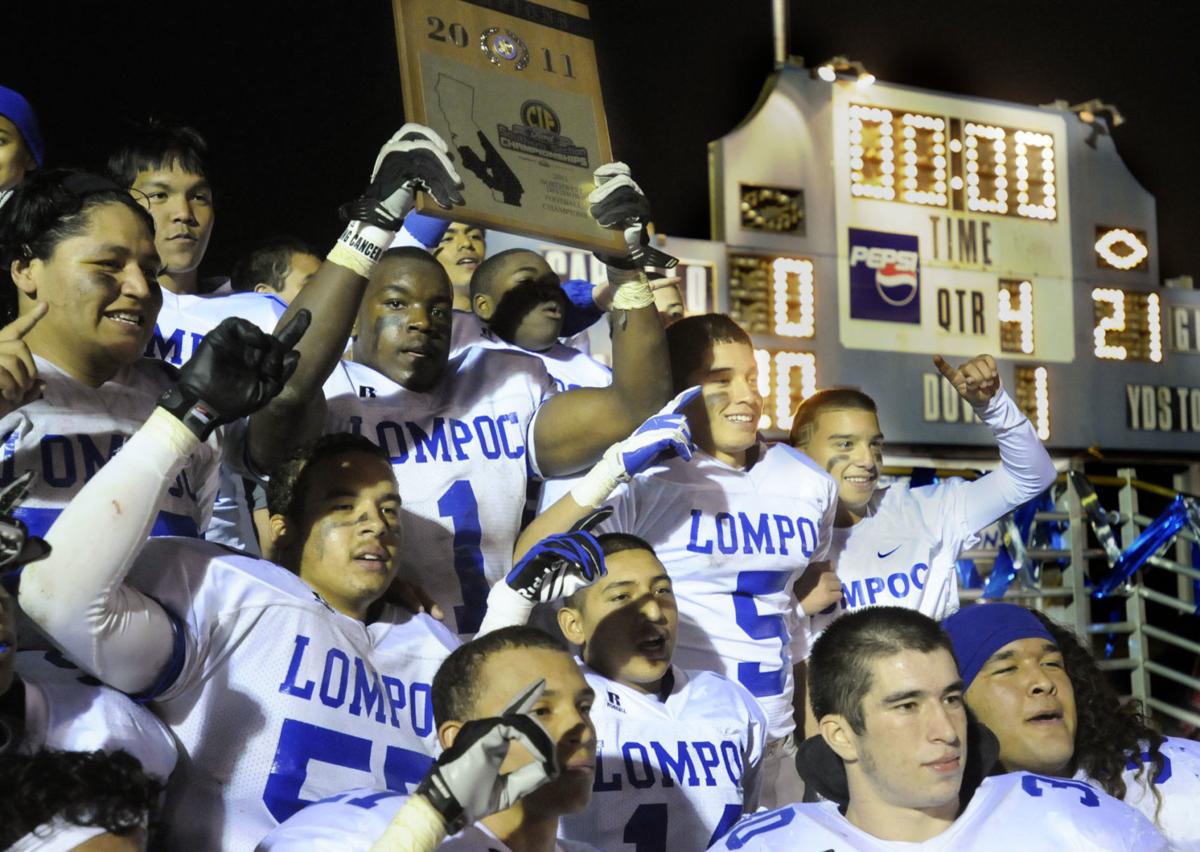 Lompoc's Lavon Coleman holds the CIF Southern Section Northwest Division championship plaque after he and the Braves beat Cabrillo 21-0 in 2011. 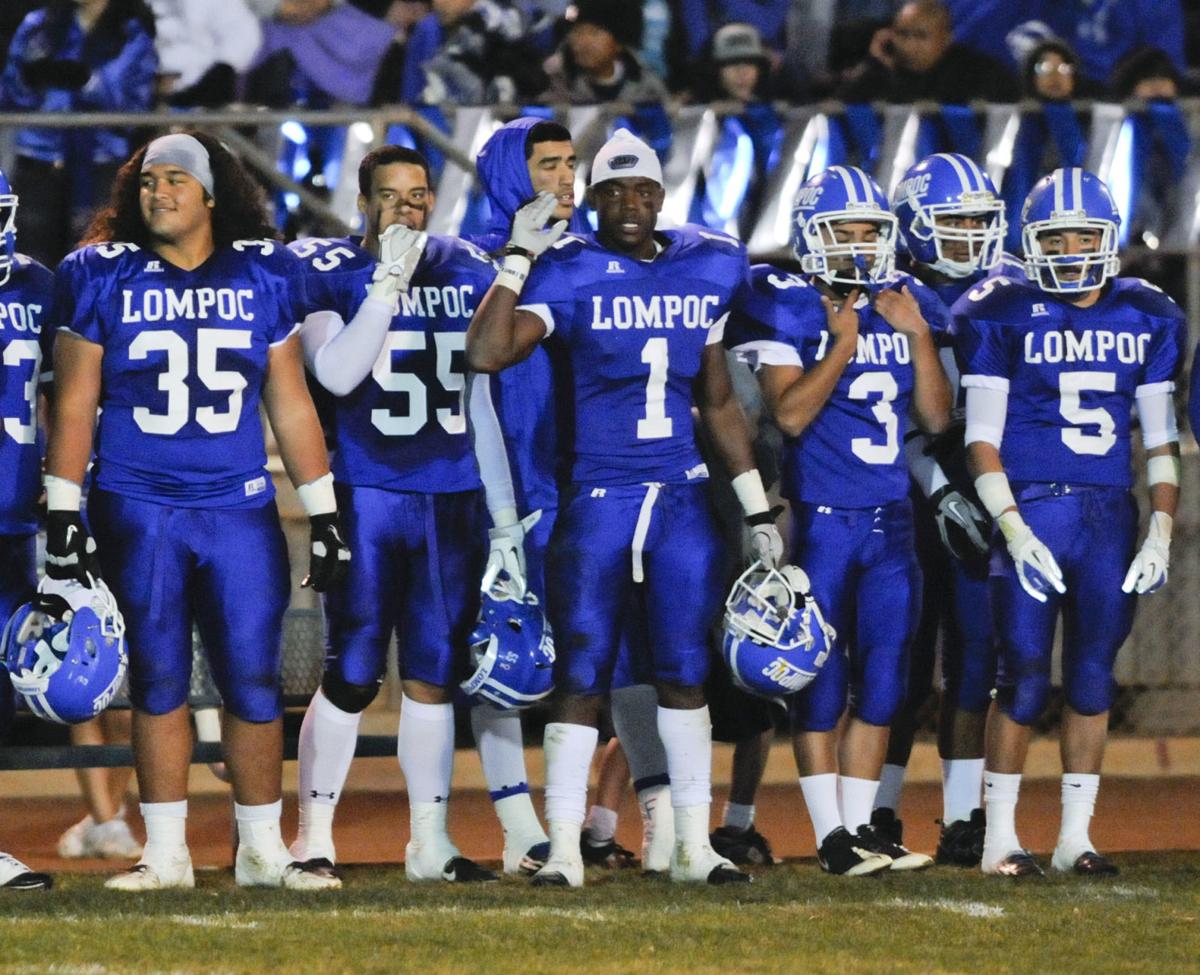 Lompoc's Lavon Coleman leads the Braves' starters as they cheer their teammates after they came out of the game during the CIF semifinal football game vs. Torrance in 2011. 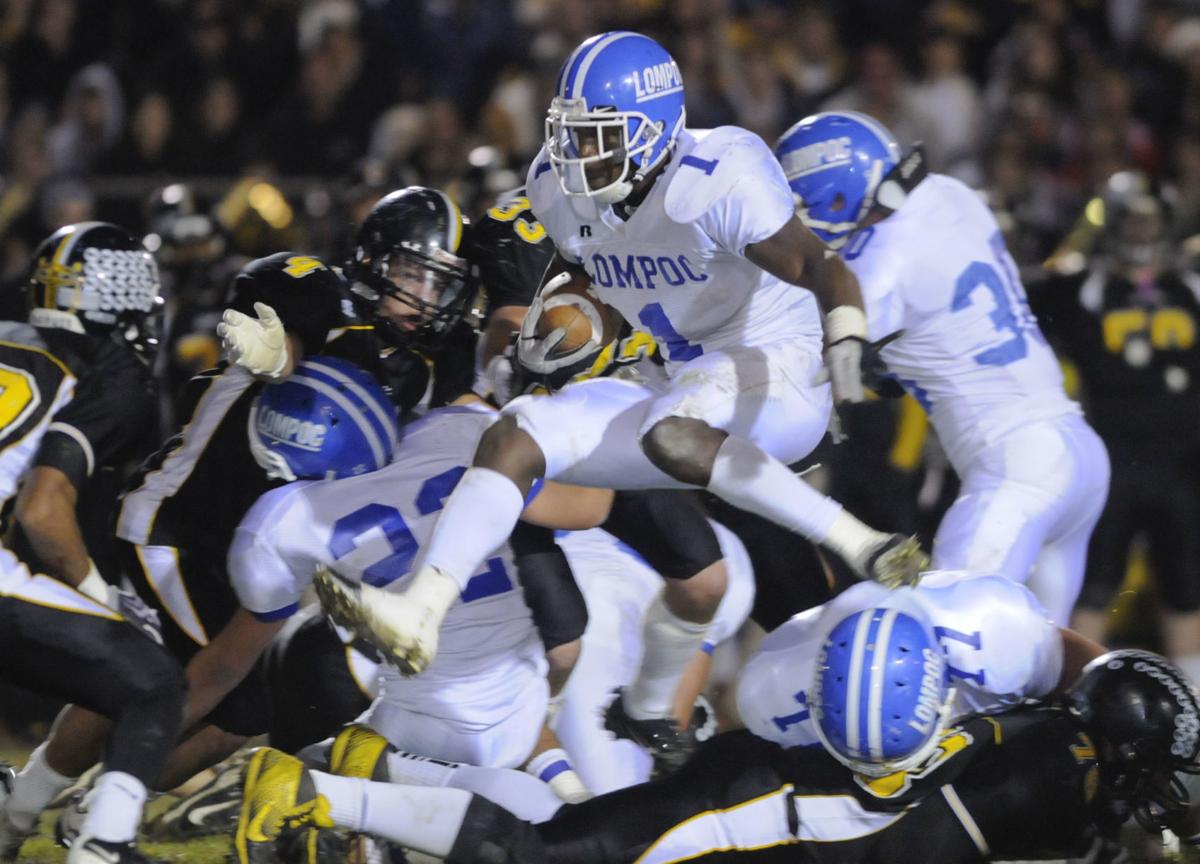 Lavon Coleman hurdles a pileup in the first quarter against Cabrillo in the CIF Southern Section Northwest Division title game in 2011 at Huyck Stadium.

Lavon Coleman certainly had the swagger. He had the game to back it up, too.

The physical tailback known for his punishing running style once declared himself the 'YAC President' during his days at Lompoc High. He made his declaration shortly after carrying the ball 36 times for 177 yards against Arroyo Grande and standout linebacker Seth Jacobs in 2011. (YAC meaning 'yards after contact', a value all respectable running backs look to build up).

The 2011 All-Area MVP went on to break Napoleon Kaufman's single-season school rushing record that year with 2,038 yards. He also had 28 touchdowns that season.

During his three-year varsity career at Lompoc, Coleman scored 48 touchdowns and racked up more than 3,500 yards rushing. He also helped the Braves capture two CIF championships.

“He looked like a college football player when I first met him,” Lompoc coach Andrew Jones once said of Coleman. “He was a fun guy to be around. Always had a smile on his face but was a true competitor.”

Coleman was called up to varsity in Jones' first season as the Braves' head coach as a sophomore in 2010. He is the fourth nominee for the Santa Maria Times and Lompoc Record's Player of the Decade award, joining Jacobs of Arroyo Grande, Blake Truhitte of Santa Maria and former Lompoc teammate Ainuu Taua.

"Lavon was a special player. He could carry the load when we needed him to," Jones says now of Coleman. "It took multiple guys to get him to the ground. The game I always think about was the opener his junior year (vs. Arroyo Grande). Him and Jacobs going at it. Lavon's one of the strongest players I've ever been around. Both on the field and in the weight room."

Jacobs had 24 tackles in that game where Coleman had 177 yards and three scores as Lompoc won 38-28. Both Arroyo Grande and Lompoc went on to win CIF championships in that 2011 season with Lompoc going undefeated and Arroyo Grande not losing against after the loss to the Braves.

Amid coronavirus pandemic, Olympic Trials qualifier Parker Reynolds finally has some water to train in

Olympics hopeful Parker Reynolds, amid the COVD-19 pandemic, has finally found some water to train in.

The water is just not in a pool.

Coleman had 652 rushing yards and eight scores on 69 carries as a sophomore. The Braves beat South Torrance to win the CIF Northwest Division title.

During Coleman's record-breaking junior season in 2011, he rushed for more than 100 yards in 12 of his team's 13 games. He had at least 150 yards in every playoff game that season, scoring nine rushing touchdowns in his team's four post-season games. Lompoc beat Cabrillo 21-0 to win its second straight Northwest title.

Coleman was nagged by injuries as a senior, playing in only eight games. He finished the year with 128 carries for 887 yards and 10 scores.

After graduating from LHS in 2013, Coleman played for the University of Washington on a full-ride scholarship, eventually spending five years in Seattle after a redshirt season.

Joe Bailey: Senior Spotlight series allows us to shine a light on the struggle and the triumph

Among graduates from high schools in Santa Barbara and San Luis Obispo counties who went on to play major college football, Coleman put together one of the more productive careers while at Washington. (Two San Luis Obispo County players are currently on NFL rosters, in Patrick Laird, of Mission Prep, and Josh Oliver, of Paso Robles. Nipomo grad Akeem King is currently a free agent).

Coleman played in 50 games with the Huskies, piling up exactly 2,000 rushing yards on 374 carries with 12 career rushing touchdowns. He also caught 31 passes for 252 yards and three more touchdowns. Coleman, who graduated from Washington, spent a training camp with the Houston Texans after leaving Seattle and going undrafted in 2018. He was later picked up and assigned to the Seattle Seahawks and Green Back Packers' practice squads before spending two games on the active roster toward the end of the 2018 season with Green Bay.

The Huskies won one Pac-12 Conference Championship during Coleman's time at Washington, even playing in the College Football Playoff in 2016 where they lost to eventual champion Alabama in the Peach Bowl.

Lavon Coleman runs with the Huskies

Santa Ynez seniors sign: Henry Allen will stay close for water polo while Nico Rocha is off to Europe for soccer

Ernesto Gomez was a four-year track runner at Pioneer Valley and a varsity runner the last two - though his senior season, as everyone else’s …

Lavon Coleman of Lompoc takes off on a long touchdown run in the first half as the Braves' sideline celebrates in the CIF Southern Section Northwest Division semifinal game against Torrance on Dec. 2, 2011.

Lompoc's Lavon Coleman holds the CIF Southern Section Northwest Division championship plaque after he and the Braves beat Cabrillo 21-0 in 2011.

Lompoc's Lavon Coleman leads the Braves' starters as they cheer their teammates after they came out of the game during the CIF semifinal football game vs. Torrance in 2011.

Lavon Coleman hurdles a pileup in the first quarter against Cabrillo in the CIF Southern Section Northwest Division title game in 2011 at Huyck Stadium.