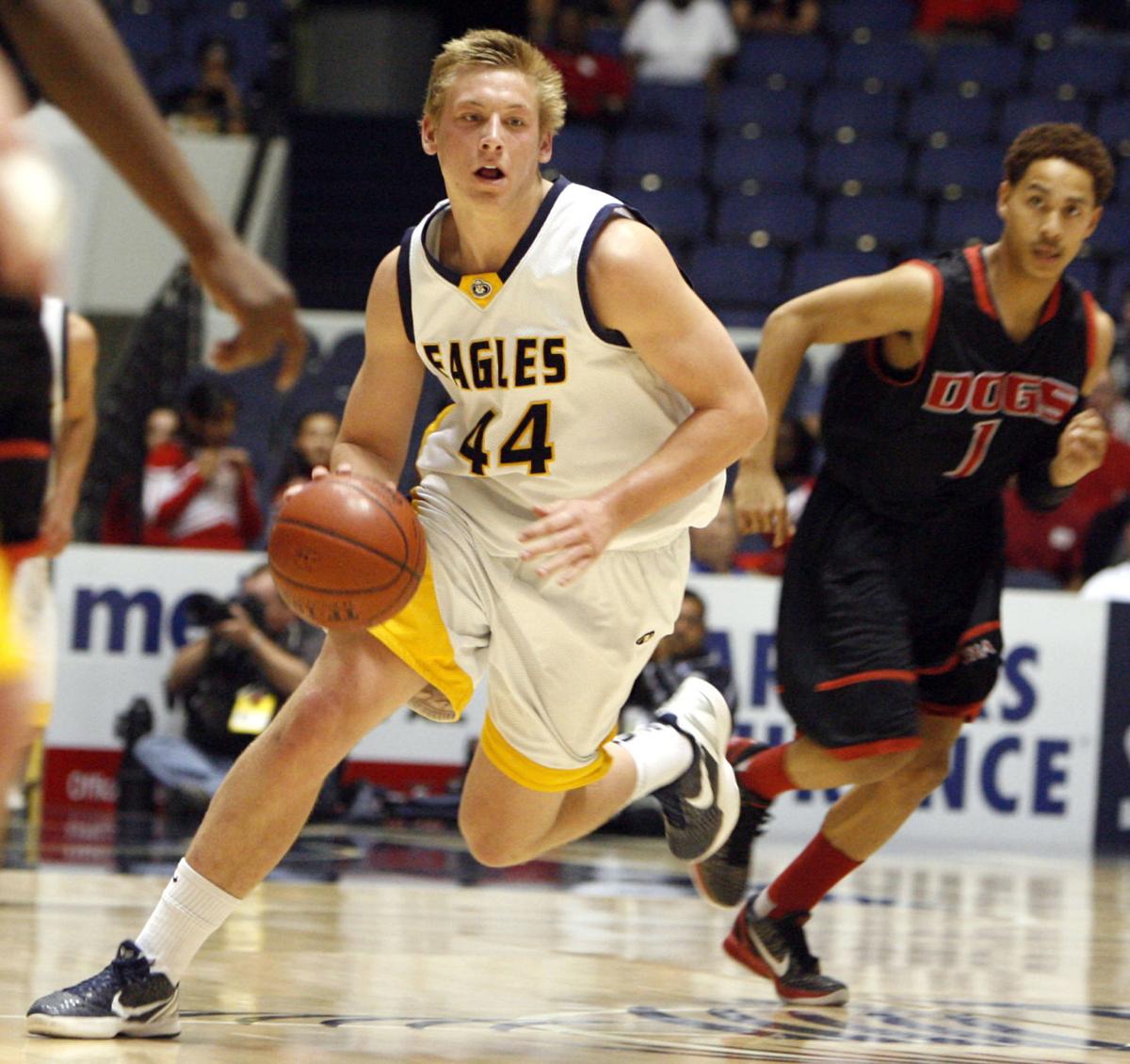 Arroyo Grande's Brent VanderVeen drives against Pasadena in a 50-35 loss in the 2012 CIF Southern Section Division 3AAA finals in Anaheim. 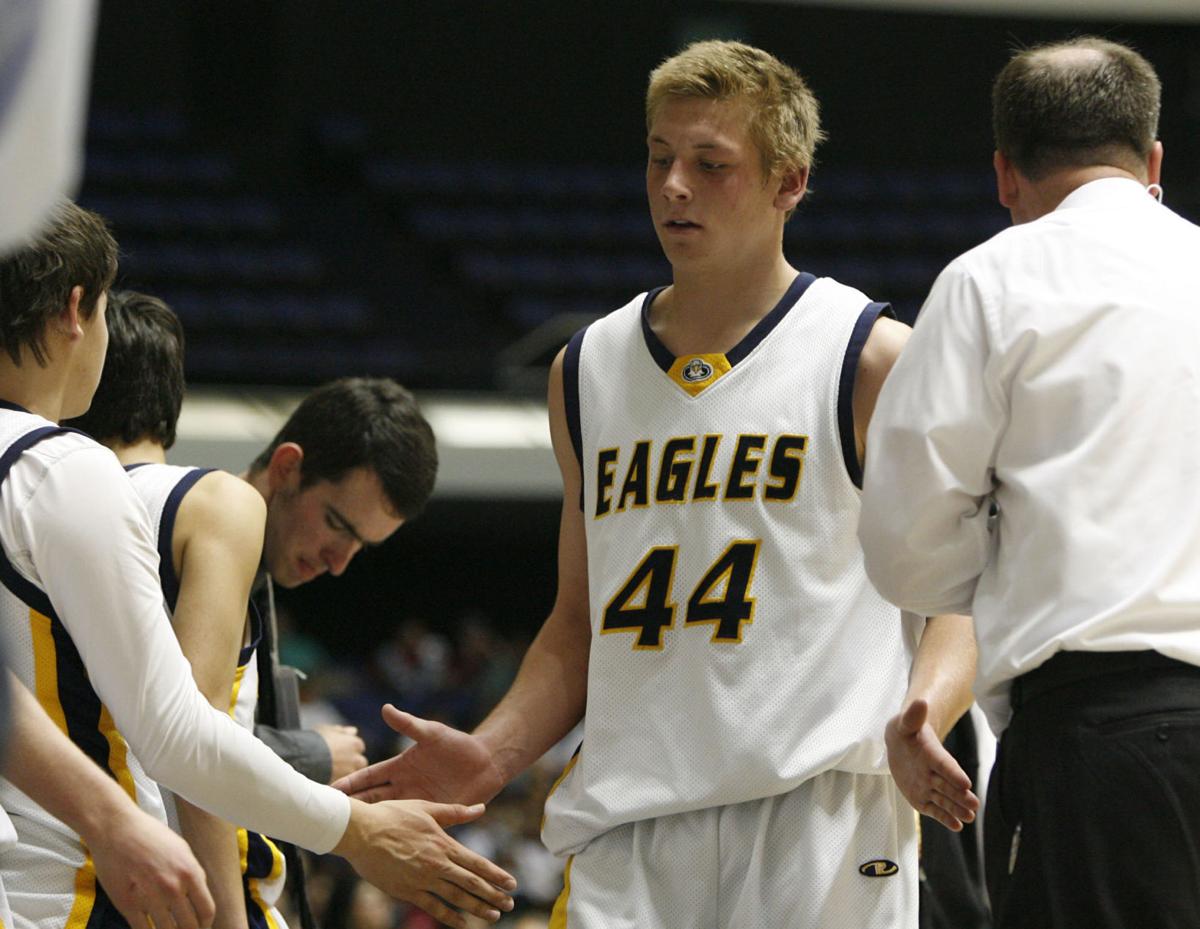 Arroyo Grande's Brent VanderVeen checks out during the 2012 loss to Pasadena High School in the CIF Southern Section Division 3AAA finals in Anaheim. 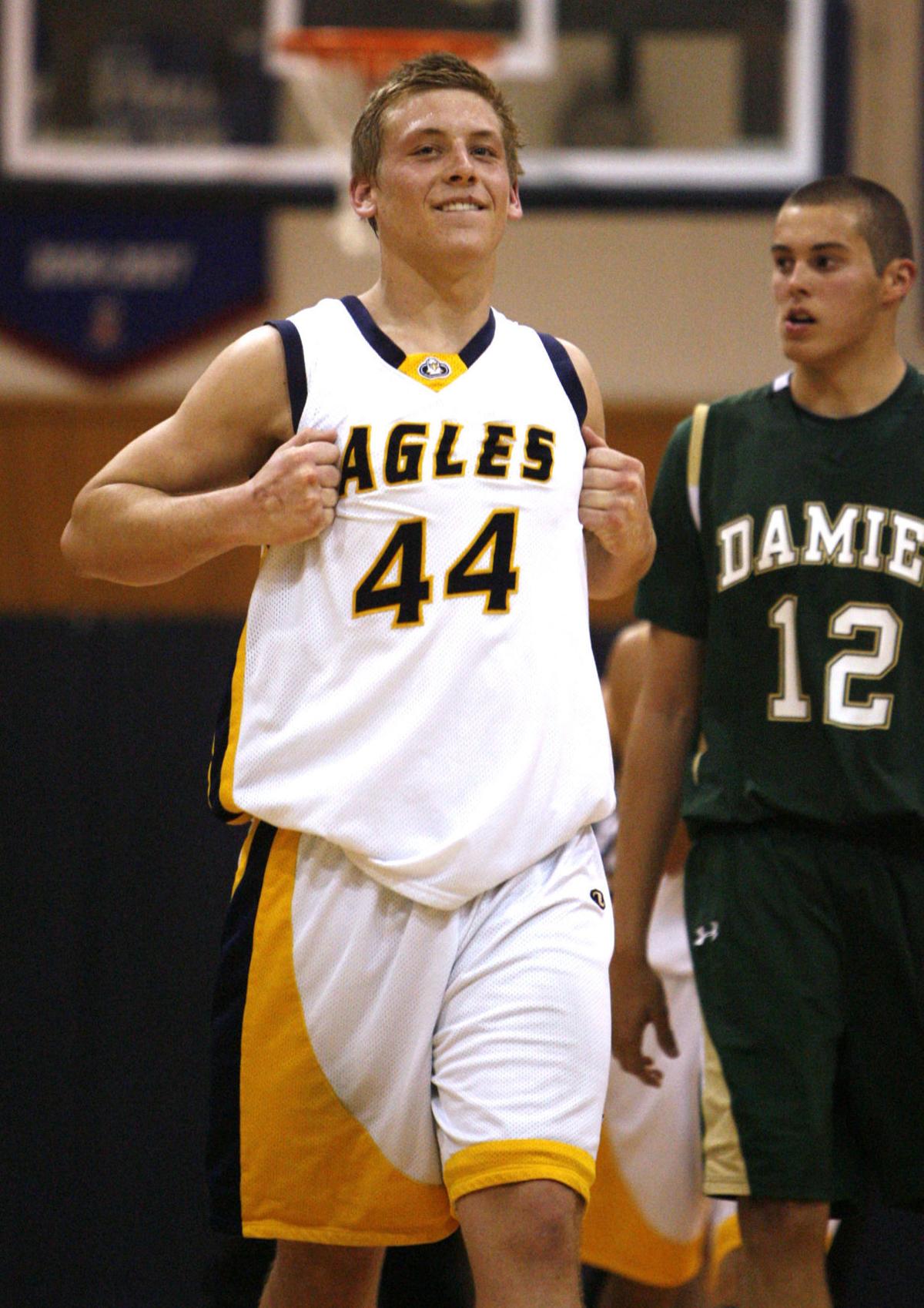 Arroyo Grande High School's Brent VanderVeen reacts during a 50-43 win against Damien High School that sent the Eagles to the CIF Division 3AAA semifinals in 2012. 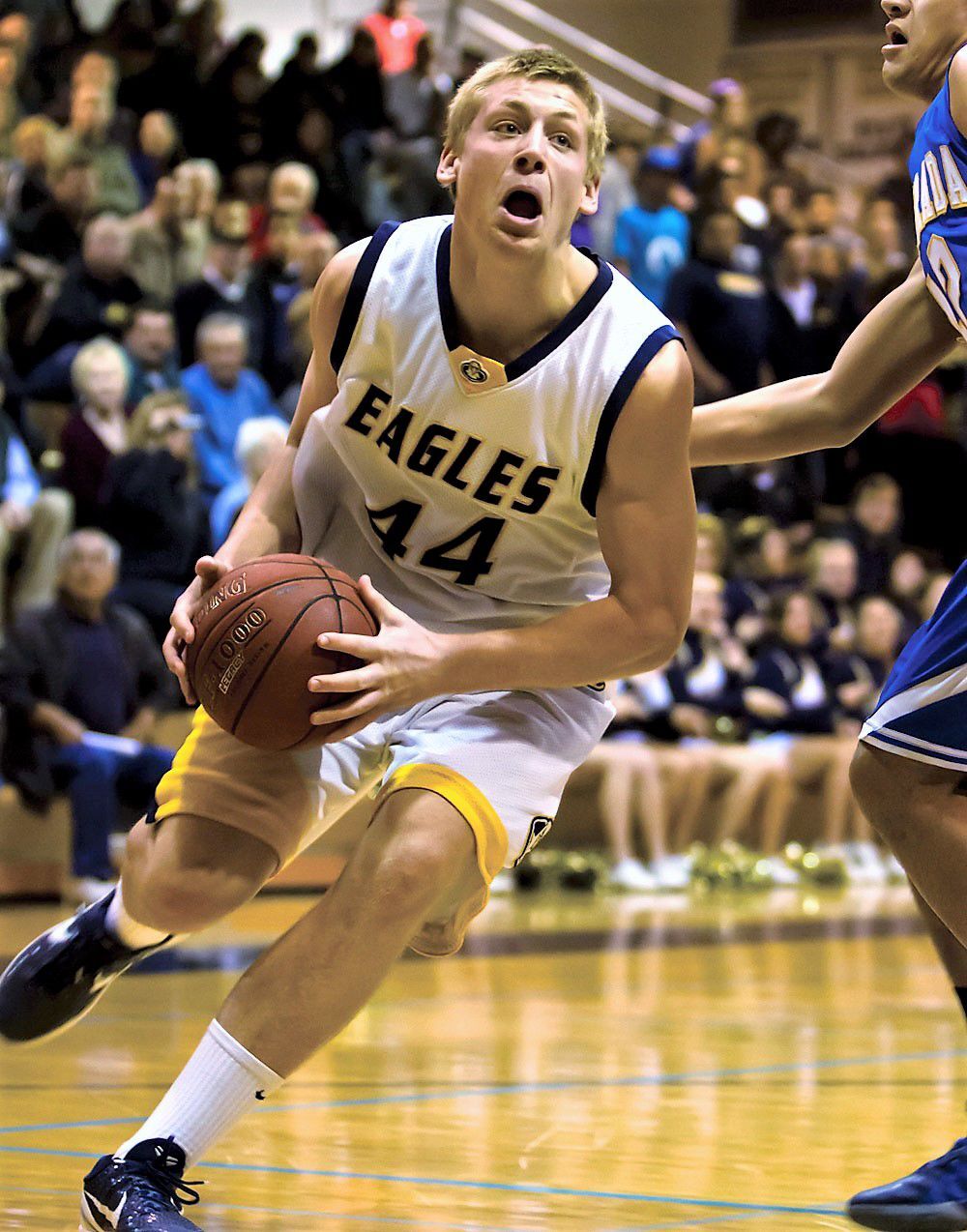 Brent VanderVeen of Arroyo Grande drives in for a shot during a playoff game against La Mirada in 2012.

Brent VanderVeen led the Arroyo Grande High football team to a CIF Southern Section title and a 24-4 record in two-plus seasons as the Eagles' starting quarterback.

He then signed to play for Oregon State on a full-ride football scholarship.

But was basketball VanderVeen's best sport? Perhaps, but VanderVeen was also an exceptional basketball player. (He could play some baseball, too).

When his senior football season wrapped up, VanderVeen took his 6-foot-5 frame from the backfield to the low post, transforming into a physical center on the Arroyo Grande basketball team.

VanderVeen practically carried the Eagles to the CIF Southern Section Division 3AAA title game as a senior in the 2011-12 season, just months after leading the Eagles to their CIF title in football.

Arroyo Grande eventually lost to Pasadena in the CIF final that year, but VanderVeen took home a slew of awards, including being named the Times' All-Area MVP and the SLO County Player of the Year.

Ryan Glanville, Arroyo Grande's basketball coach, said of VanderVeen in 2012: “There were a lot of things with Brent that made him such a good player. Number one, he was a very smart player. He was the same way on the football field, I’m sure. He led us in points, rebounds, blocked shots. He was also an outstanding passer.”

VanderVeen scored 16.3 points a game, adding 13.4 rebounds, during his senior season. He played 19 games that year after leading the Eagle football team to a 13-1 record at quarterback. During that following basketball season, VanderVeen helped the Eagles to a 15-game win streak, a rare league title (ending an 11-year drought) and their first CIF final since 1970.

Glanville said of VanderVeen, “Brent is just one of those athletes who are pretty unique, pretty special.”

VanderVeen had a skillset rarely seen in the modern game. He could be a bruising presence in the paint, able to defend and score down low. But he also had the qualities of an athletic quarterback, able to pass and jump and handle the ball.

Growing up, VanderVeen said, he didn't have a favorite sport, though basketball was certainly in the mix. He then started to find his own on the football field. Though most players of his stature would land on the varsity team as a freshman, or sophomore at the latest, VanderVeen delayed his varsity football career until his junior season.

“The summer before my sophomore year (football coaches) gave me the choice of moving up to varsity or staying down at JV,” VanderVeen told the Times in 2012. “I was only going to play half time on the varsity, so I stayed down.”

That seemed to work out OK. VanderVeen led the Eagles to back-to-back CIF title game appearances and the 2011 title in football. He then guided the basketball team to a PAC 7 League title and another CIF final. The 2011-12 Eagle team was 7-7 following a devastating 70-45 loss to Righetti, which also made a CIF final that year.

The Eagles then reeled off 15 straight wins, ending with the loss to Pasadena in the CIF final. The Eagles also won a state playoff game that year.

VanderVeen went on to play quarterback at Oregon State, though the coaching staff there eventually moved him to tight end, where he played in nine games before leaving the team in 2015.

It's almost time to vote in our boys basketball player of the decade poll, have you taken a moment to read about the nominees? Go through this collection of profiles and get ready for the voting.  We have been working to highlight the decade's best players in several different sports over the last few months, and now we continue with boys basketball. We've really enjoyed the level of participation we've had with the football and girls basketball polls, so share these profiles and the contest with your friends to get the word out and support our local athletes.

Is there a sport in which the athletes rely more on their physical ability than basketball? The sport is dominated centers, forwards and guard…

A telltale sign of a player's greatness is when opposing coaches respect them as much as their own. David Terrones had that trait. Of course, …

Player of the Decade: Let's not forget the greatness of Chad Brodhead

Player of the Decade: Gabrys Sadaunykas left his mark at St. Joe's

Gabrys Sadaunykas wasn't at St. Joseph for very long, but he certainly left his mark there. As a senior, Sadaunykas, a native of Vilnius, Lith…

Player of the Decade: Gage Gomez quickly rose to stardom at Arroyo Grande

Arroyo Grande High School has a proud basketball tradition filled with memorable players. Gage Gomez is up there with the best of them. Gomez …

Player of the Decade: Bryan Smith's a named that shouldn't be overlooked

The name Bryan Smith may not ring a bell to those who have a passing interest in Central Coast basketball. With a name like Bryan Smith, that'…

Arroyo Grande's Brent VanderVeen drives against Pasadena in a 50-35 loss in the 2012 CIF Southern Section Division 3AAA finals in Anaheim.

Arroyo Grande's Brent VanderVeen checks out during the 2012 loss to Pasadena High School in the CIF Southern Section Division 3AAA finals in Anaheim.

Arroyo Grande High School's Brent VanderVeen reacts during a 50-43 win against Damien High School that sent the Eagles to the CIF Division 3AAA semifinals in 2012.

Brent VanderVeen of Arroyo Grande drives in for a shot during a playoff game against La Mirada in 2012.