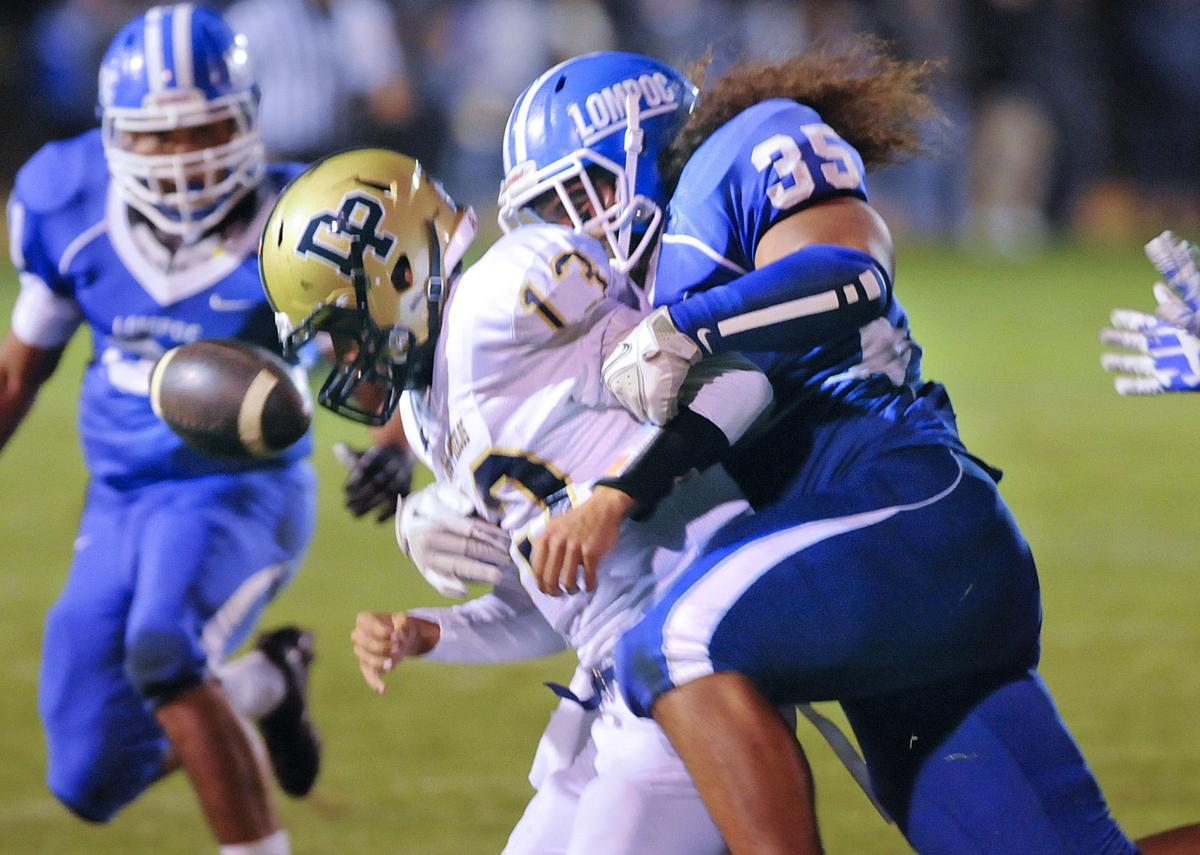 Lompoc's Ainuu Taua forces a fumble by Dos Pueblos quarterback Barrett Burnes. Lompoc recovered the ball during the 2013 game at Huyck Stadium. The former standout defensive lineman who went on to play at UCLA is the second nominee for Player of the Decade. 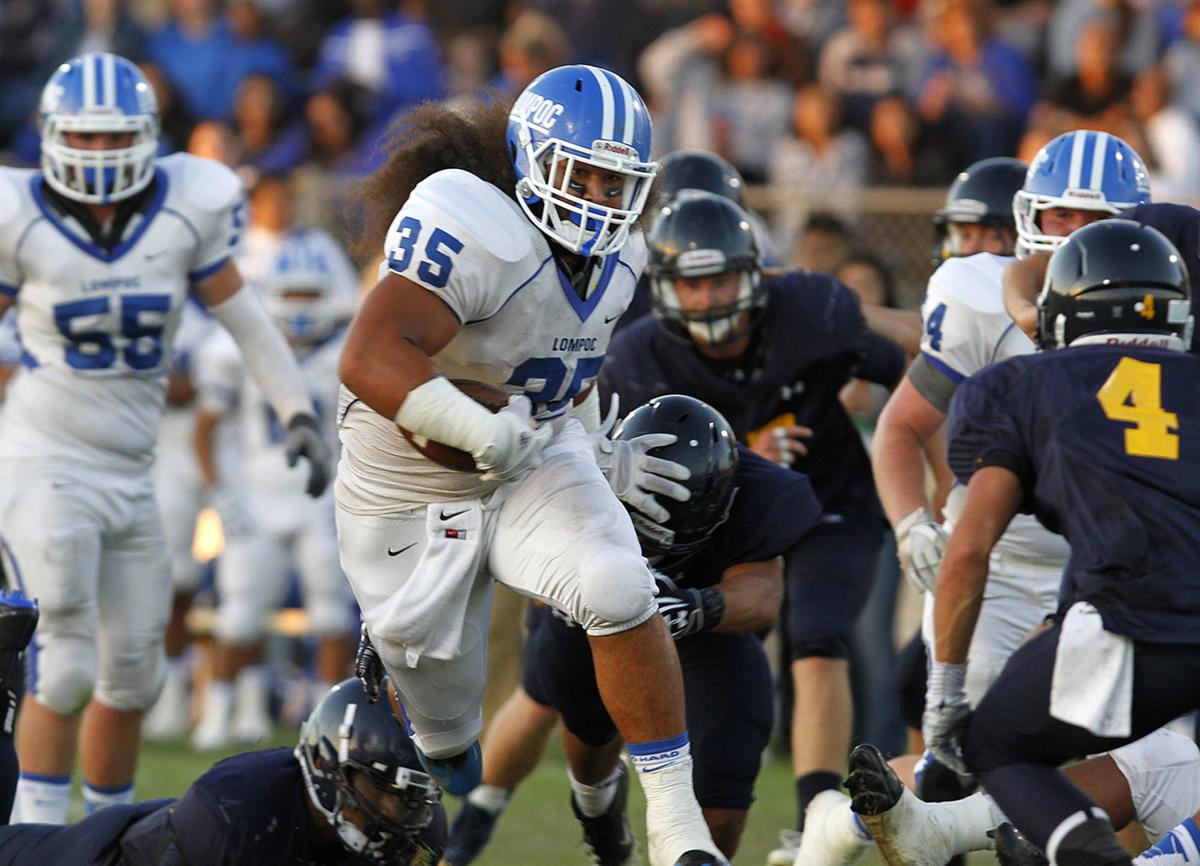 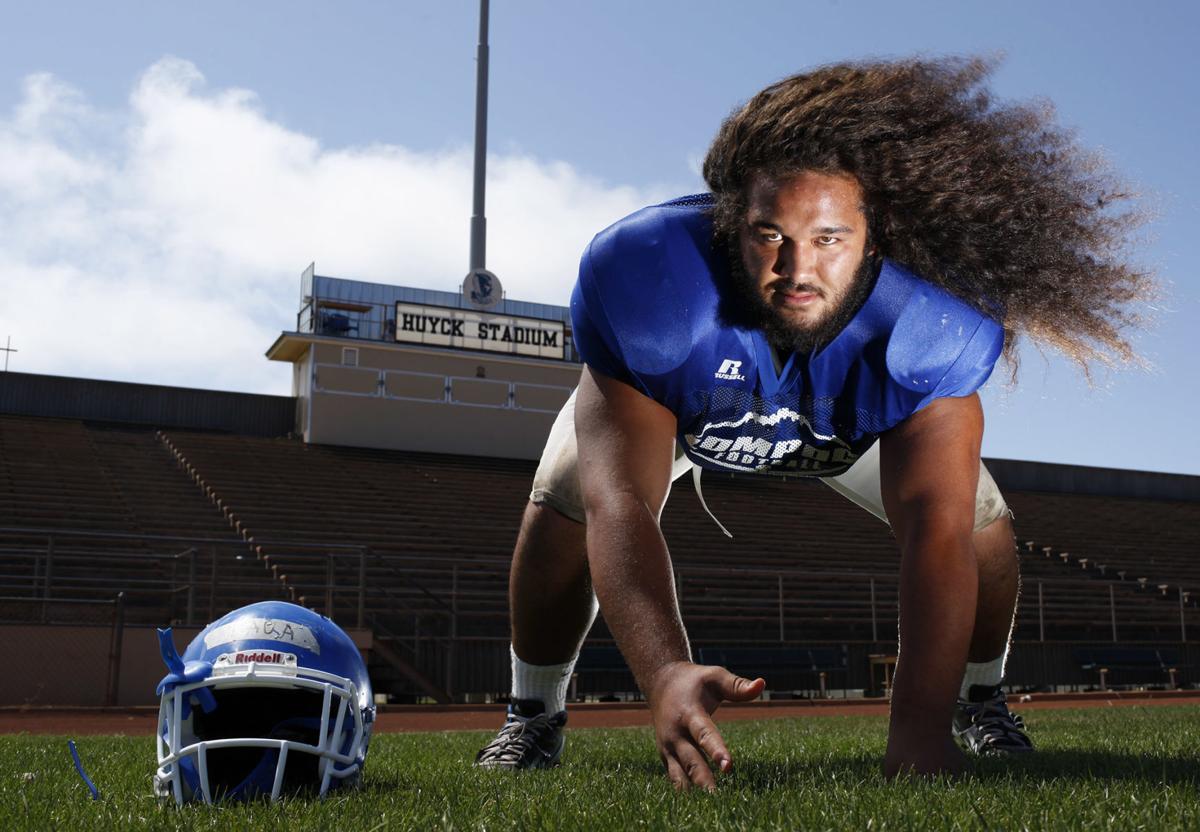 Lompoc High lineman Ainuu Taua won the All-Area MVP honor for the 2013 season. He was also an Army All-American before signing to play for UCLA, where his career ended in 2017. 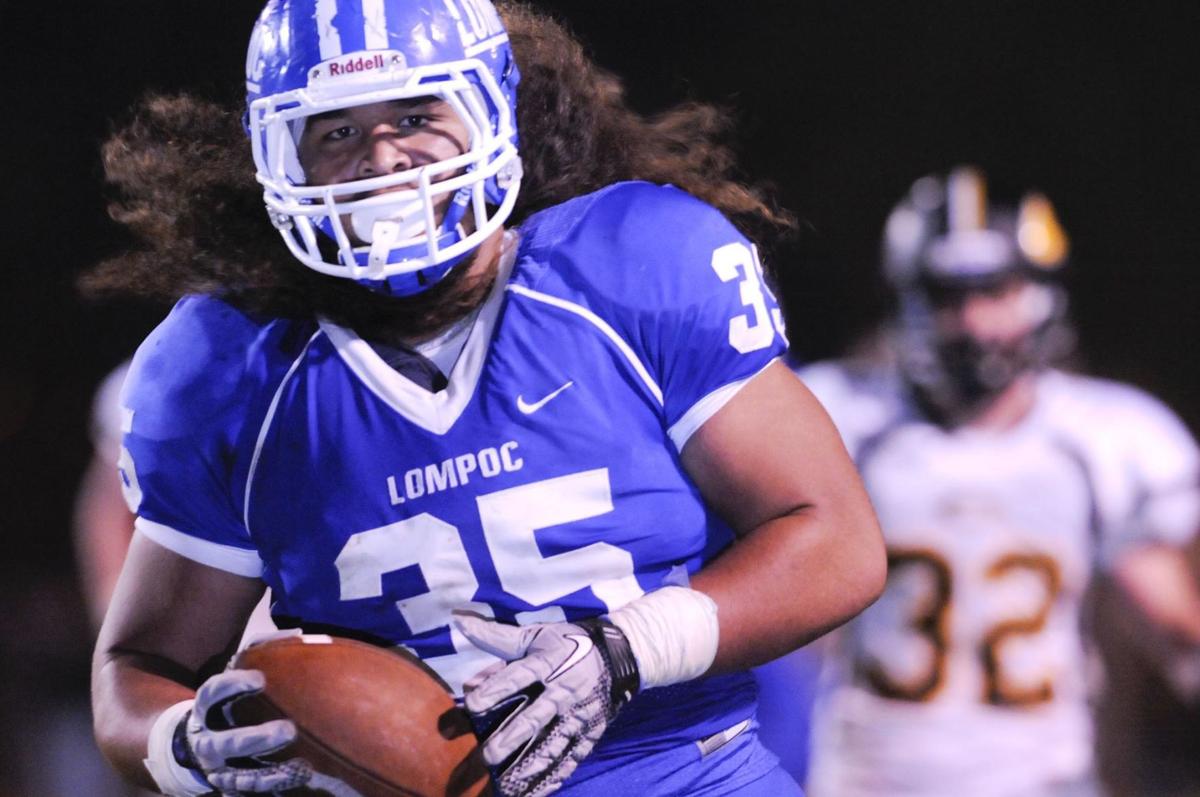 Lompoc's Ainuu Taua catches a touchdown pass in the Big Game against Cabrillo. Taua, who graduated from LHS in 2014, went on to play for UCLA through 2017.

Dominance can be subtle in football, appearing and disappearing in a flash. Sometimes it's there, hidden in the trenches, surrounded by a dozen big-bodied men in the middle of the field.

Ainuu Taua possessed that type of dominance. He could out-muscle an entire defense for four quarters and not have his name called by the public address announcer once.

Make no mistake about it, though. Taua also possessed the flashy, jaw-dropping type of dominance as well, wrecking entire offensive lines en route to blowing up quarterbacks.

Either way, to those in the know, especially local coaches, the former Lompoc High defensive lineman was clearly one of the most dominant players of the past decade. College coaches noticed, too, as Taua piled up Power Five offers en route to a career at UCLA.

Taua, who graduated from Lompoc High in 2014 and played defensive line and fullback at UCLA, is our second nominee for Player of the Decade. The sports staff at the Santa Maria Times, Lompoc Record and Santa Ynez Valley News polled area coaches for nominees and will allow readers to vote for Player of the Decade after all the nominees have been announced. Arroyo Grande's Seth Jacobs, the first nominee, was announced last week.

Santa Ynez coach Josh McClurg added: "Ainuu was by far the best player we have ever coached against."

Zane Sheckherd wraps up another productive season at Sonoma State

The 5-foot-11, 270-pounder racked up major honors as a senior for the Braves. He was named the Los Padres League MVP, the All-Area MVP and an Army All-American, playing in the All-American Bowl in San Antonio. He then signed with UCLA in February of 2014 and spent his redshirt freshman season with the Bruins that fall under coach Jim Mora.

At UCLA, Taua bounced around from defensive lineman to fullback back to the defensive line. He ultimately transferred out of UCLA initially to Nevada, but never played again after 2017. Taua chose UCLA over Oklahoma and Ole Miss.

He played in 26 games at UCLA where he made 11 total tackles and caught two passes for 16 yards. Taua tore his ACL, MLC and dislocated his knee cap on a kick return in November of 2017. Taua, who usually blocks on returns, fielded a short kick and was tackled awkwardly.

During his days at Lompoc High, Taua sacked the quarterback 21 times. He had 130 total tackles, 80 of which were solo. The Braves also employed him as a tight end and he caught six touchdown passes. He rushed for two scores as well.

“He’s probably the only guy in the area that you really had to game-plan around,” Jones said of Taua in 2014. “You really had to have some certain things, certain checks and things to go away from him because he just disrupted so many things, especially defensively.”

Football: Former Lompoc star Ainuu Taua ready to move up and down the UCLA defensive line

After schools statewide closed in March, so did all team workouts. So Dulay has developed a solo workout routine — well, not exactly solo. Her father, Santa Maria Reds president Rob Dulay, hits ground balls to her off the hitting tee — of her own.

The Orcutt Academy senior carries a 4.7 GPA and was that school’s nominee for the Northern Santa Barbara County Athletic Round Table Male Scholar Athlete of the Year honor.

Cabrillo High School senior Antoinette Terrones has zero peripheral vision, yet she will be playing intercollegiate soccer, either for Denver-based Regis University or Hawaii-Hilo.

Lompoc's Ainuu Taua forces a fumble by Dos Pueblos quarterback Barrett Burnes. Lompoc recovered the ball during the 2013 game at Huyck Stadium. The former standout defensive lineman who went on to play at UCLA is the second nominee for Player of the Decade.

Lompoc High lineman Ainuu Taua won the All-Area MVP honor for the 2013 season. He was also an Army All-American before signing to play for UCLA, where his career ended in 2017.

Lompoc's Ainuu Taua catches a touchdown pass in the Big Game against Cabrillo. Taua, who graduated from LHS in 2014, went on to play for UCLA through 2017.