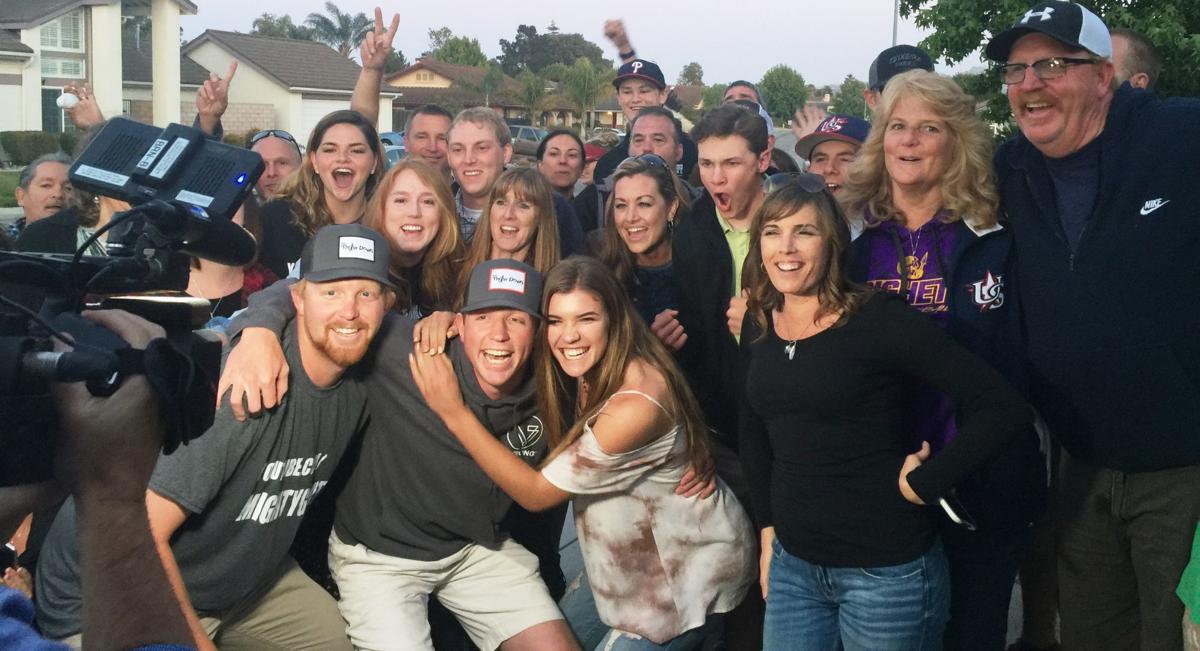 Righetti grad Matt Sauer, center, poses for photos with friends and family after being selected in the second round of the Major League draft on June 12. Sauer's senior season and his being drafted by the Yankees is one of the top sports stories from the 2016-17 school year.

Righetti grad Matt Sauer speaks with media after being drafted by the New York Yankees on June 12. Sauer's year has been voted the third-best story of 2017 by the Lee Central Coast News sports staff. 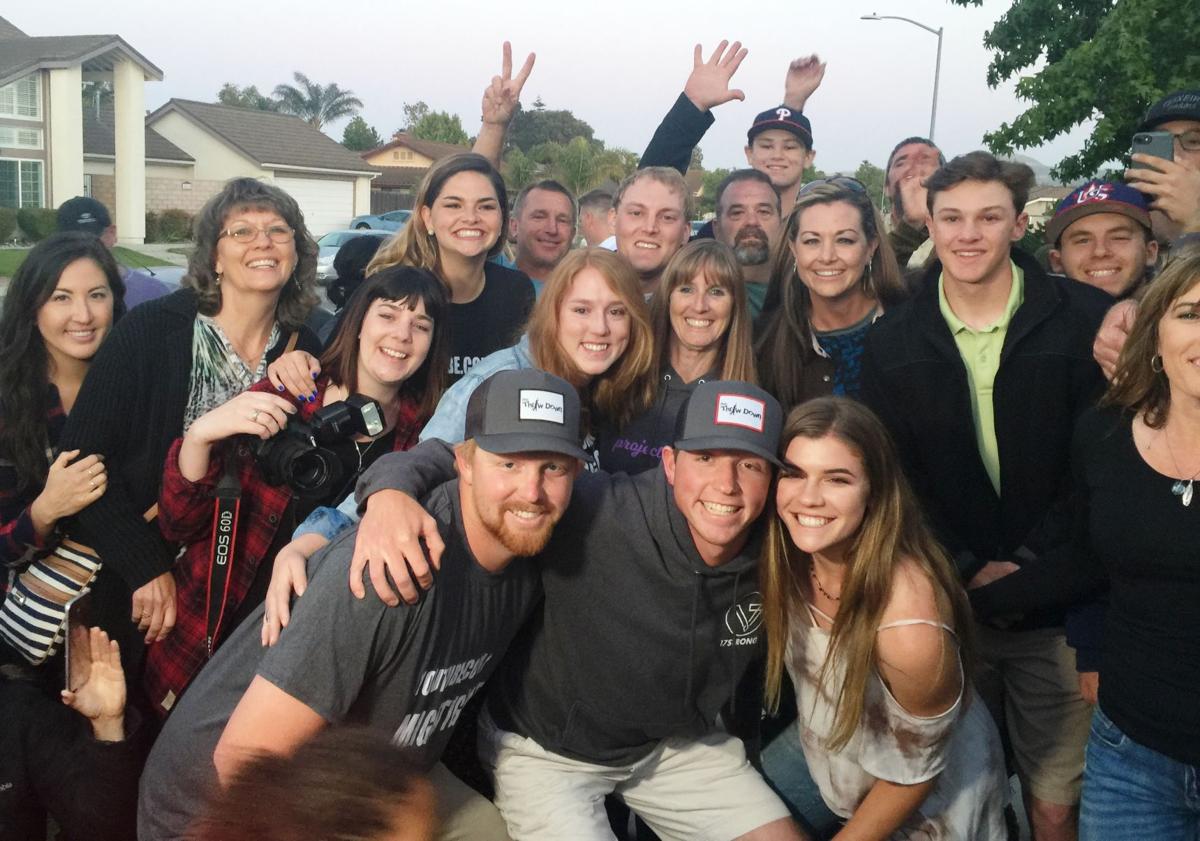 Righetti grad Matt Sauer, center, poses for photos with friends and family after being selected in the second round of Monday night's Major League draft.

From small-town Orcutt to the Big Apple.

That's the transition Righetti grad Matt Sauer is embarking on.

Sauer, a 6-foot-4, 200-pound right-handed pitcher, was selected with the 54th overall pick on Monday night by the New York Yankees in the second round of Major League Baseball's first-year player draft.

"It's going to be a lot different going from Santa Maria to New York City, but I think I'm ready for it," Sauer said moments after getting the call from New York.

Dozens of friends, former teammates and family members filled the Sauer family home in Orcutt on Monday night to watch the draft on TV. About midway through the first round, the Yankees informed Sauer's representation that if he's available with the 54th pick, they'd take him. That's exactly what transpired.

Sauer goes to the Yankees at No. 54. pic.twitter.com/YOYrWscxJ2

"I can't be any more blessed. I'm so excited," Sauer said after working in a few dozen hugs. "I'm so happy that my friends and family were here to witness this. It's just amazing."

We're glad you came around ... Welcome to the Yankees! https://t.co/VOrUywqhkC

Sauer spent four seasons as a member of Righetti's varsity baseball team. He could be the second Warrior to don pinstripes in the Bronx. Righetti grad Robin Ventura was selected 10th overall by the Chicago White Sox in the 1988 draft and played for the Yankees in 2002 and 2003.

Sauer, who had committed to pitch collegiately for Arizona, said he will likely sign with the Yankees.

New York offered a signing bonus substantially higher than the No. 54 slot is allotted. According to Baseball America, the No. 54 pick's minimum bonus was $1.23-million. The Yankees reportedly offered Sauer a bonus more than twice that, at $2.5-million.

The moment began to sink in for Tamera Sauer, Matt's mother, when he informed her that the Yankees are flying the family out to their Tuesday night game at Angel Stadium.

"Blessed," Tamera said as she fought back tears when asked to sum up her emotions. "He's a great kid. He's got his dream. With all our kids we've been involved in everything they've done. Whatever their passion is, we've supported them. Matt's passion was baseball and we kind of helped him along the way. He did the hard work and we just helped him get there."

And now I'm the biggest Yankee fan in the world https://t.co/fixPw0aHGk

Nick Sauer, a 2010 graduate of Righetti, said the Yankees selecting his younger brother in the second round Monday may finally force him to admit that Matt is the better athlete.

"I guess right now would be the time where I'll say, 'Ok. You one-upped me,'" Nick Sauer said.

What got Matt to this point?

"His competitive edge," Nick said. "I've never seen somebody as competitive as him. It could be wiffle ball in the backyard, me and him one-on-one, and he would NOT lose. It was just that type of relationship and that's just the type of person he is... Just so much anger if he was losing."

Fellow 2017 Righetti grad Zach Andersen, who first caught Sauer in the summer of 2014, was also swept up in the magnitude of the evening.

"I love that kid," Andersen said. "He's the best pitcher I've ever caught or ever seen, man. He's something special and I can't wait see him do big things in the big city, man."

Sauer's velocity exploded at the start of his senior season and he soared up the draft rankings. His fastball sits in the mid-90s and is paired with a sharp breaking pitch and an occasional changeup.

Sauer is a tremendously gifted athlete. He also played shortstop, second base and first base for Righetti and was the Warriors' top hitter with a .427 average. On the mound this year, Sauer had 0.98 ERA with four complete games and a pair of shutouts. He struck out 142 batters in 78 1/3 innings, allowing just 42 hits while walking 31. But Sauer, like his brother Nick, was also a talented basketball player, though he focused on baseball his senior year.

"Matt's the most deserving guy I've ever met," Andersen said. "He's so humble and so talented. And he doesn't let anybody know how talented he is, he'll just show you. On the baseball field, in practice, he doesn't give anything less than 110-percent.

"Just wait five years, he'll be the ace of the rotation sooner than you think."

Sauer said he was a bit awestruck at the prospect of playing for the Yankees, who have won 27 World Series. He hopes to be a part of one of those World Series championships in the future.

"Hopefully one day I'll get a ring with them," Sauer said.

Righetti grad Matt Sauer, center, poses for photos with friends and family after being selected in the second round of the Major League draft on June 12. Sauer's senior season and his being drafted by the Yankees is one of the top sports stories from the 2016-17 school year.

Righetti grad Matt Sauer speaks with media after being drafted by the New York Yankees on June 12. Sauer's year has been voted the third-best story of 2017 by the Lee Central Coast News sports staff.

Righetti grad Matt Sauer, center, poses for photos with friends and family after being selected in the second round of Monday night's Major League draft.