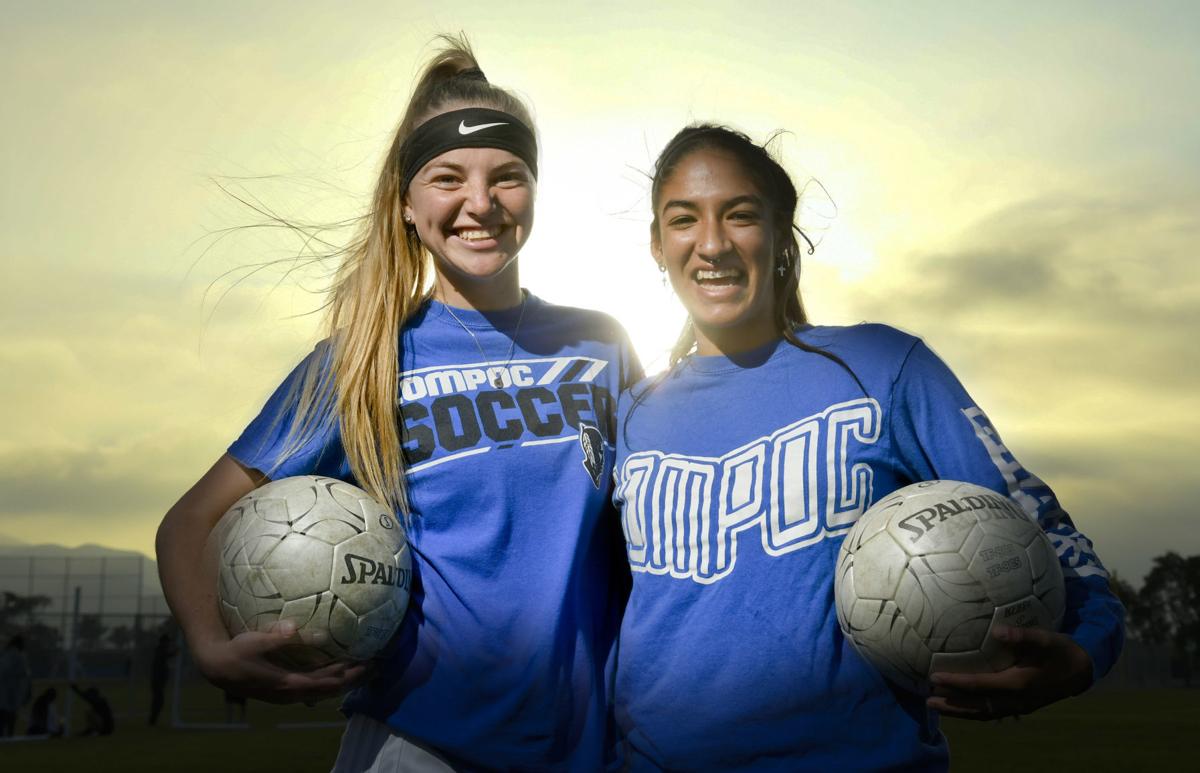 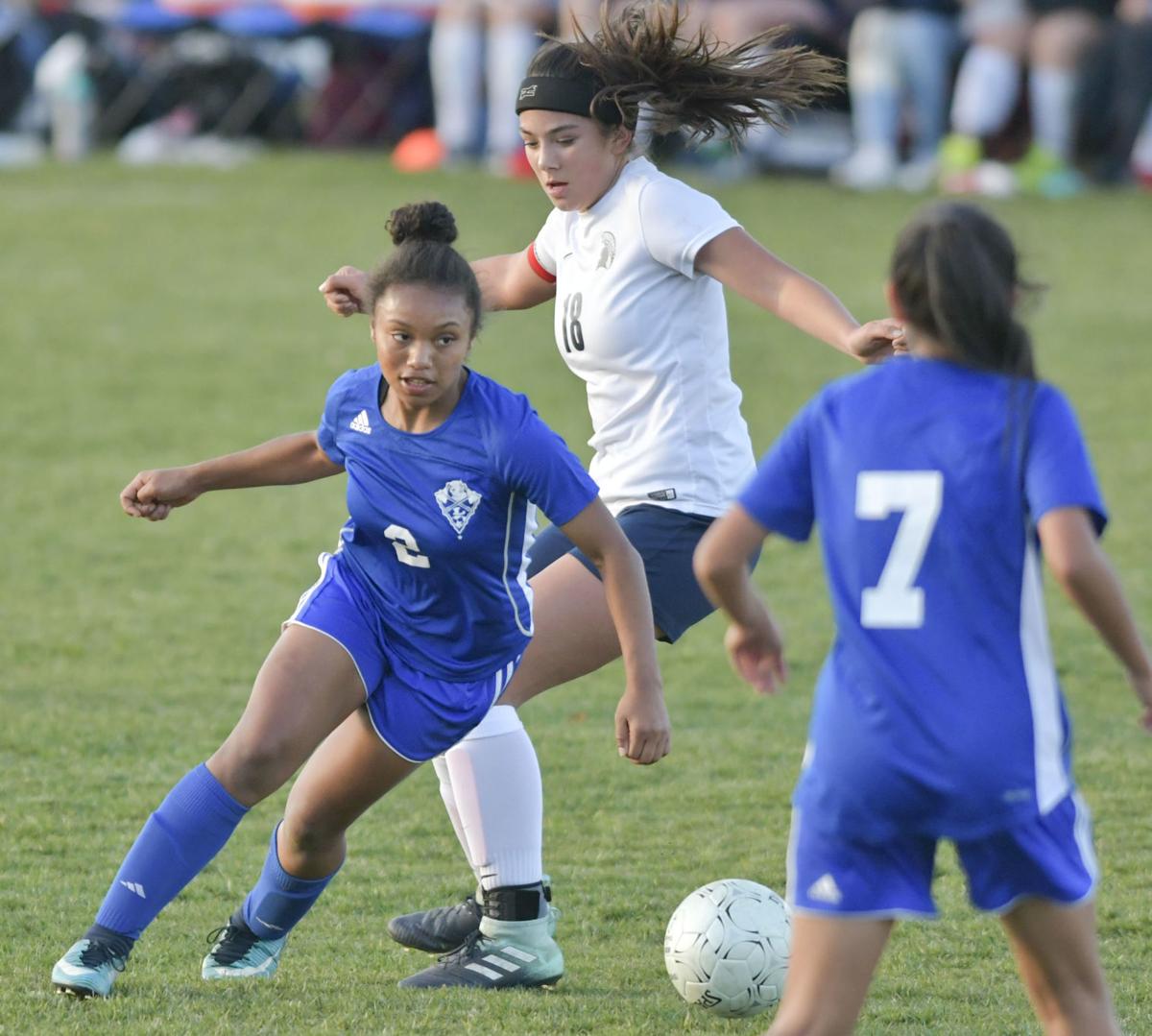 Lompoc's Ayziah Simmons gets past Orcutt Academy's Alexx Ascencio in front of the Spartan goal, as Amy Bommersbach (7) of the Braves waits for a pass during their non-league contest in a 2018 game. Both Simmons and Bommersbach are expected to lead the Braves in 2019 and 2020.

Before last season, Lompoc High girls soccer found itself trying to get used to the step in competition in the Channel League.

Now this season, the Braves are expected to be the team everyone will try to topple in the C.L.

The Braves finished 7-1-3 in league games and went 11-4-3 overall; propelling them to one of the Channel's best marks in the six-team league.

Fifth-year head coach Jason Cochrane – who is additionally entering his eighth season with the Braves girls soccer team after starting out as an assistant – is aware that competition on Tuesdays and Thursdays will raise a notch, as teams will aim to give LHS its best game.

The 16-year-old junior from Buellton seamlessly blends a full college prep workload while competing on three of the Pirates’ athletic teams and has started a school club — and he does it all while maintaining a perfect 5.0 grade point average.

“Last year, we felt like we were going to be really fighting to keep ourselves in it for a CIF spot. We talked about goals from last year and our goal was to just make it to CIF playoffs,” Cochrane said. “I don’t think we ever envisioned fighting for a league title all the way to the last game of the season. The girls were always prepared and always ready for a fight. We put ourselves in a really good spot last year.”

And the enthusiasm plus expectations for another league crown haven’t changed.

“We feel good about going into this year. We have a little more knowledge on what to expect and what teams will bring what,” Cochrane said. “It’s a much more competitive league. Every game is literally a game that can decide the way it goes down the stretch.”

The one team that handed Lompoc its lone league loss: Dos Pueblos, which was the second C.L game for the Braves.

Lompoc went 7-0-2 the rest of the way – including toppling the team that challenged them the most during the Braves’ Los Padres League years: Santa Ynez.

Brayan Nunez has been a catcher in baseball since his Little League days.

Cochrane likes the fact he didn’t lose much talent to the June 2019 graduation. A good core of players are returning at Huyck Stadium.

“I’m returning most of my captains, I’m bringing back three,” Cochrane said. “And when you can put Ayziah Simmons on the roster, you’re good.”

Simmons is the same Brave who has turned into one of the more dangerous girls soccer players to game plan for – with her knack for using her track speed and constantly attacking the net. According to Max Preps, Simmons scored 24 goals in 15 games last season.

Cochrane, though, believes LHS will be much more than just Simmons.

The Streak is at 17, and the Hancock College football team has clinched a share of the Pacific League title.

“We’re bringing in some strong players. We have a couple of freshmen who are showing really well,” Cochrane said. “Some of the returners have progressed dramatically. We’re going to be looking to Alondra Banales to do some work up at the top. We might be getting some attacking players that I’ve been playing as defenders. You might see Amy Bommersbach or a Katie Guzman on the score sheet. With the year we’ve graduated some players, we now have some depth. We’re going to be deeper this year than we have in the past.”

Not only is LHS itching to make another run at the league title, but also aiming to shed the bitter taste left behind by Beverly Hills – the team that eliminated Lompoc in the CIF Southern Section Division 4 playoffs.

Cochrane has turned his attention to helping redeem the Braves from that contest, plus get them ready for the 2019-20 haul.

“After the season, you’re like ‘It’s great to get that rest.’ But shortly thereafter, you get that itch again right away,” Cochrane said. “Once you see the players and you start scheming in your head a little bit and kind of picturing what could be, you start to get a little excitement.”

AJ Pateras' run as Cabrillo's football coach is over.

Lompoc's girls soccer team moved to 2-0-1 on the season with a dominant win over Mission Prep on Tuesday.

Lompoc's Ayziah Simmons gets past Orcutt Academy's Alexx Ascencio in front of the Spartan goal, as Amy Bommersbach (7) of the Braves waits for a pass during their non-league contest in a 2018 game. Both Simmons and Bommersbach are expected to lead the Braves in 2019 and 2020.