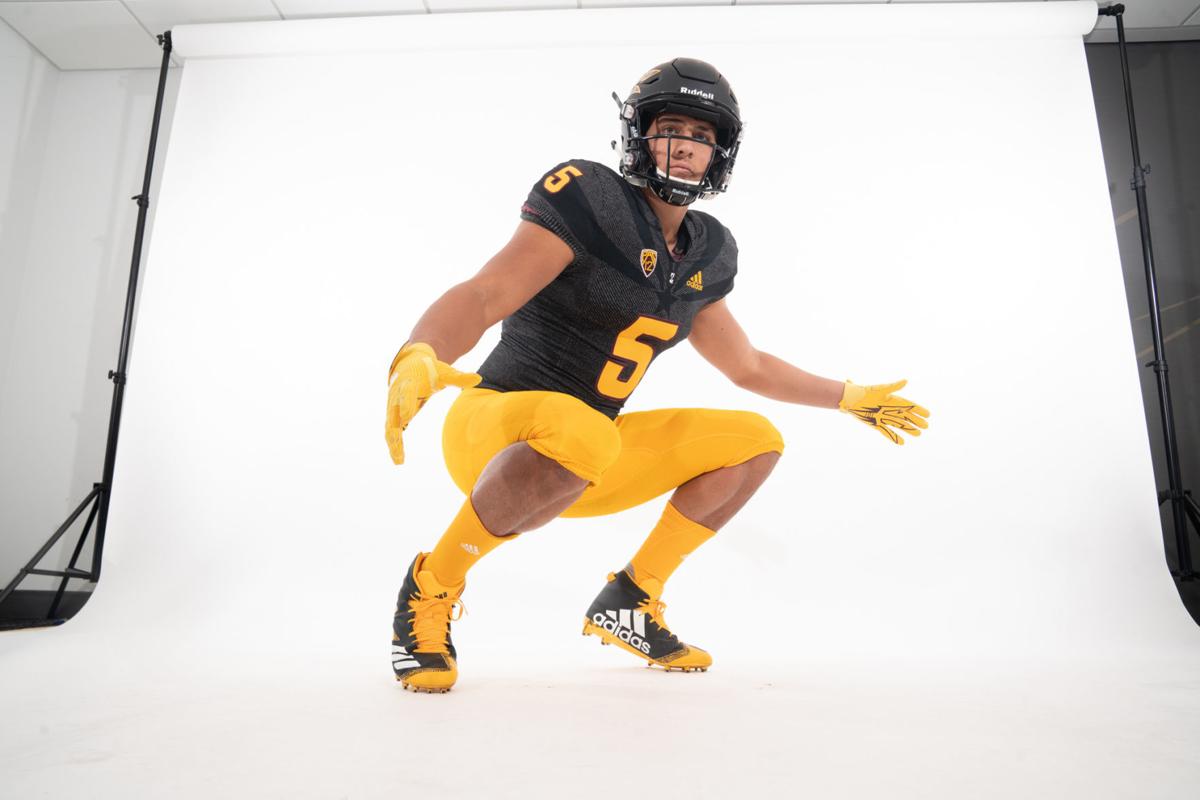 Lompoc's Ryan Morgan poses for a photo during his visit to Arizona State to play tight end. 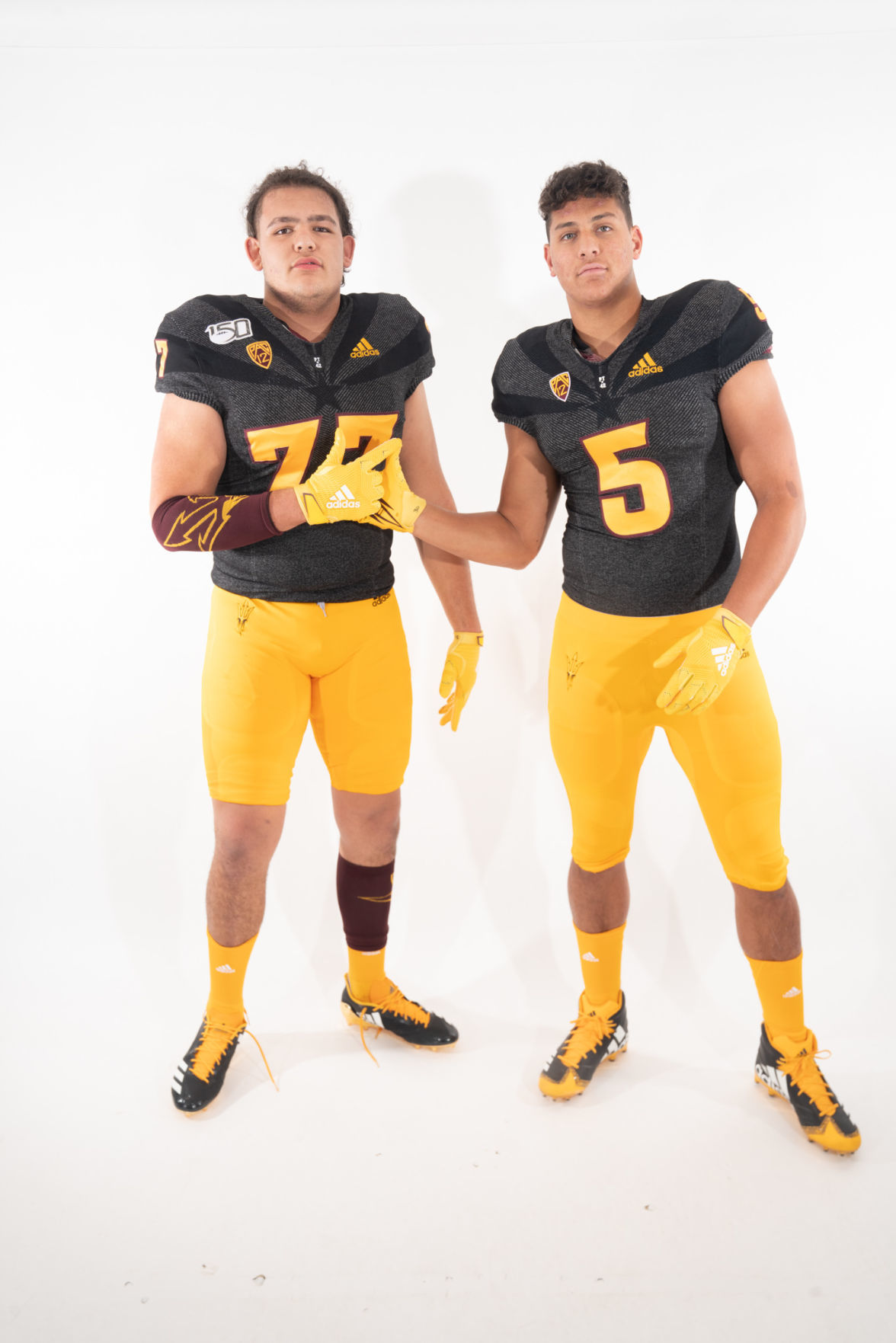 Lompoc High seniors Jacob Nunez, left, and Ryan Morgan pose for a photo during a visit to Arizona State. The duo, who are cousins, has committed to Arizona State to play football. 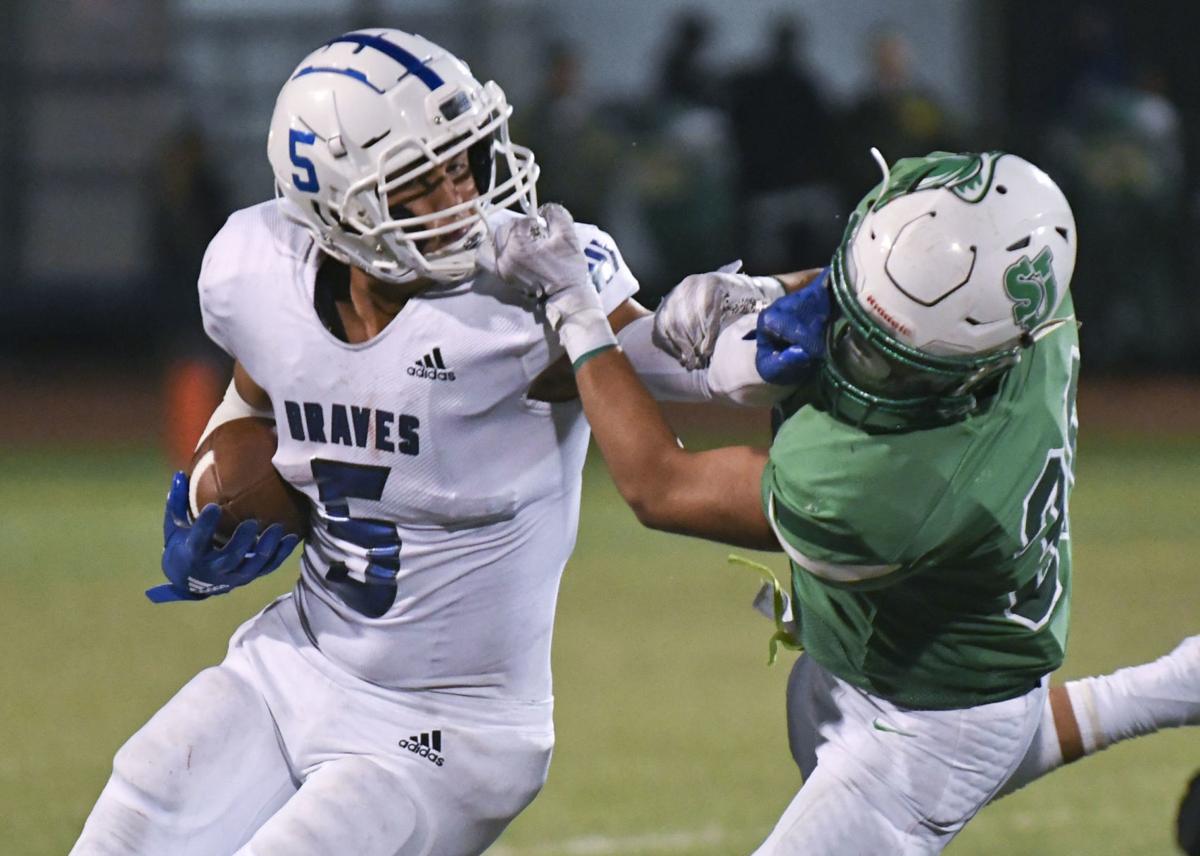 Lompoc's Ryan Morgan runs against St. Joseph's Josiah Acosta during a game in September. Morgan has committed to play for Arizona State. 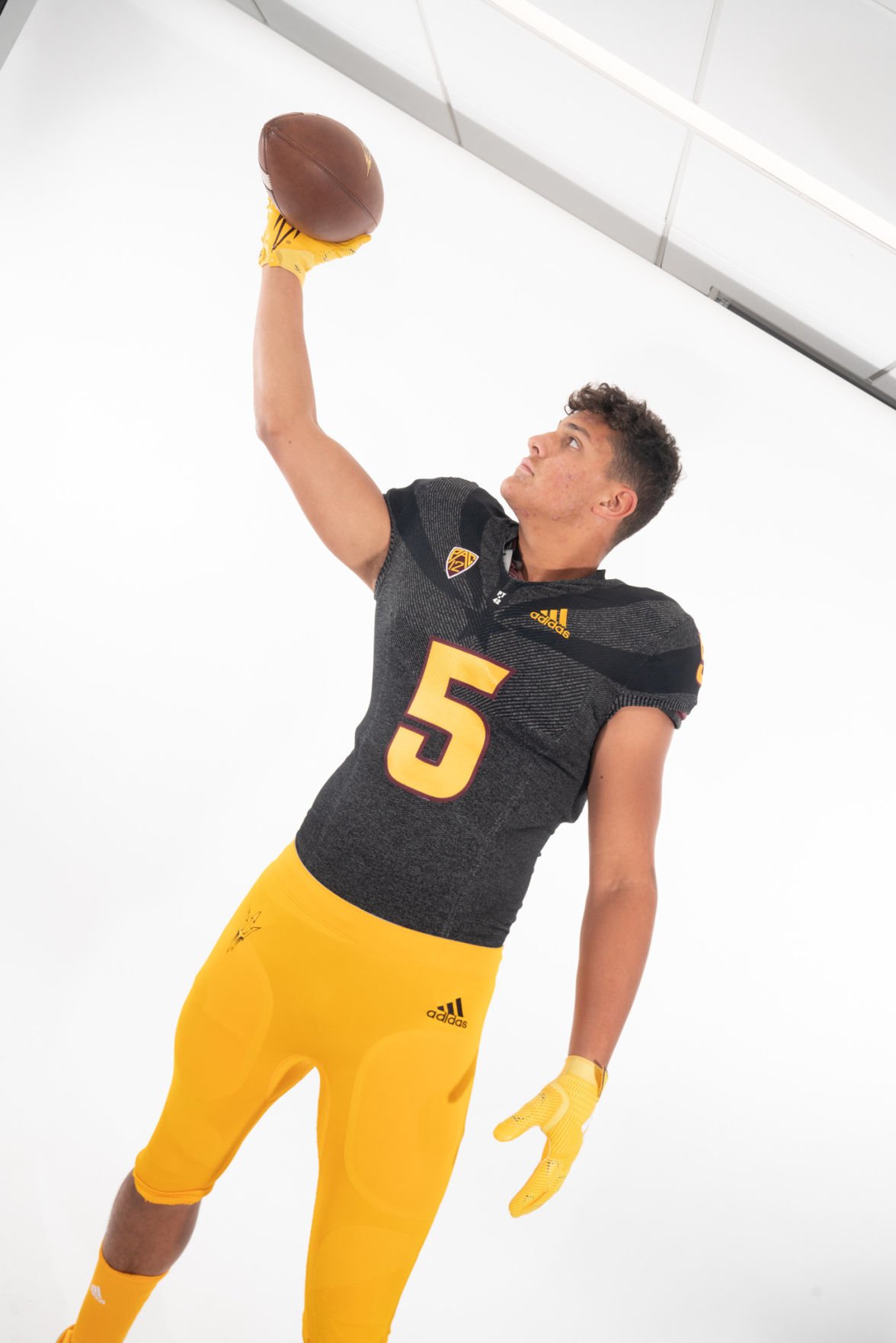 Lompoc's Ryan Morgan during his visit to Arizona State. 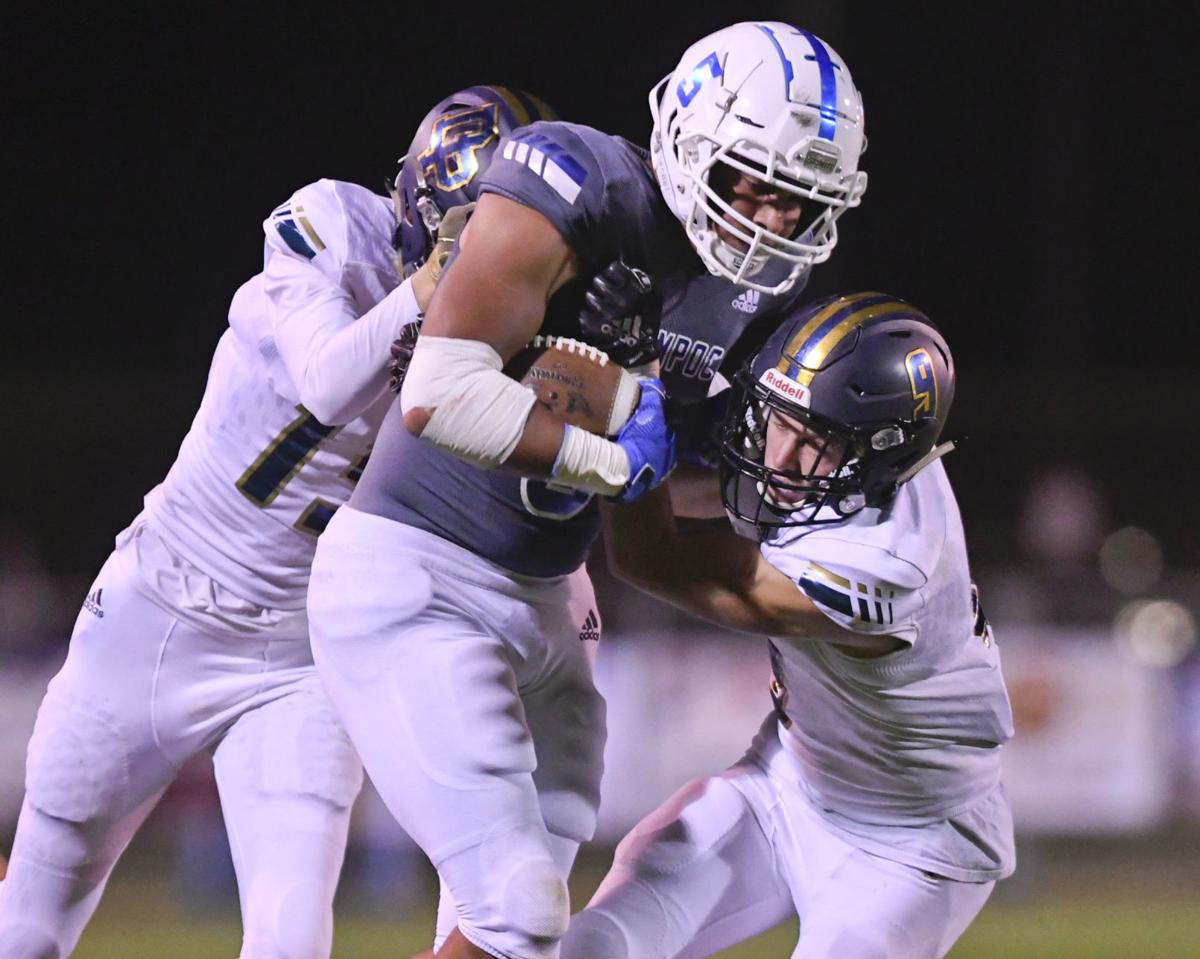 Lompoc's Ryan Morgan tries to shake off Dos Pueblos' Baylor Huyck and Conner Gleissner after catching a pass during a game in October.

Lompoc High's Ryan Morgan came to an unexpected fork in the road and found himself facing a decision he never thought he'd have to make.

Before his senior season began, the athletic tight end landed two college offers: One from UNLV and another from Wyoming.

He chose Wyoming, verbally committing last summer. The choice was easy at the time. Morgan had gained little recruiting attention after missing most of his junior season with a broken collarbone. The chances of him landing an offer from a Power 5 schools seemed slim.

In fact, before his first two offers arrived, Morgan was sure he'd go to Hancock College first and then try to land a scholarship from there.

Lompoc came into the season with the most talented roster on the Central Coast.

But something changed as Morgan put together a stellar senior year with the Braves.

Ultimately, he received another offer, one from Arizona State, a Power 5 school and member of the Pac-12. It's also the same school where Jacob Nunez, Morgan's cousin and teammate at LHS, had committed to over the summer.

"I tried to look at it from different points of view," Morgan said. "I tried a few different perspectives. One was as my parents. I know that they want what’s best for me and I tried to think about what they would do. Obviously, Arizona State is a lot closer to home and I'd be playing in the Pac-12. Combine that with the coaching staff there and, in my parents’ point of view, I thought they would choose ASU.

This time, there was no collapse in the fourth quarter. On this night, Lompoc ensured that it wasn’t going to endure a repeat of last week’s final 12 minutes of the game – and rolled past Bishop Diego 17-7 on Friday night at Huyck Stadium.

"I also tried to look at it from the perspective of someone who doesn’t know me. There's this kid that has these three offers and one is from a school where my cousin is going. I'll have family in Arizona with Jacob being there. I'll have family at every game. All that combined and it made the choice a little bit easier."

Morgan visited Arizona State the Saturday after Thanksgiving and chose the Sun Devils not long thereafter.

His commitment to ASU is an incredible turnaround from 12 months ago when Morgan lost his junior season to injury.

"I think it was on the sidelines after I broke my collarbone, I just thought to myself. Not that my football career is going to be over, but it was a major step back for me," Morgan said. "I’ve learned that junior year is supposed to be the year where you get the most (recruiting) attention. I felt like that opportunity was ripped away from me. I was glad that it wasn’t a super serious injury.

"Honestly, I wasn’t expecting a scholarship and the plan was to attend Hancock and get one from there."

Central Coast 60: See who lands the top spot among the area's best

Here's the final entry into the 2019 Central Coast 60, where I try to break down the best players in the area.

Morgan eventually healed up and, for the first time in his career, began to put himself out there more, attending college football camps. UNLV and Wyoming both offered him after seeing him at a USC camp earlier this year.

"I got the offers from Wyoming and UNLV and that was one of the best days of my life," Morgan said. "Obviously, it opened the door for so many opportunities and I wasn’t expecting another scholarship."

Lompoc coach Andrew Jones, understood the decision to decommit from Wyoming and choose ASU was difficult for Morgan, but knew he could handle it with poise.

"Ryan, just overall, from character to the classroom to the person, just in general, and as an athlete, he's the full package," Jones said. "He's one of the best kids I've ever coached, from top to bottom. He has every attribute as a kid that you look for."

Morgan and Nunez are the fourth Pac-12 commits that Jones has coached in 10 seasons at LHS. They join former Washington standout Lavon Coleman and former UCLA defensive lineman Ainuu Taua. Another one of Jones' former players, Toa Taua, is wrapping up his sophomore season at Nevada.

On the 805 recruiting trail: Lompoc's Ryan Morgan goes from zero offers to two — in less than 24 hours

Ryan Morgan went from being offer-less, to wondering if his broken collarbone from last season would hold him back, to now landing two scholarships in fewer than 24 hours

Morgan's parents, mother Claudia Terrones and father Scott Morgan, were both college athletes at Gonzaga. Terrones played basketball and Morgan played both basketball and baseball with the Bulldogs. Ryan says his parents' guidance and input has been invaluable through this process.

"Without them none of this would be possible," Morgan said of his parents. "They've helped me through everything I’ve been through. They are the reason I am who I am. Them having that college experience helped give me the opportunity to compete at that level. Growing up, I was told 'This is how college and professional athletes will prepare and this is how they'll play.'

"My parents, they're the most important part."

His team has a long way to go, Valley Christian Academy boys basketball coach Christopher Maples said afterward, but his guys did nab their fi…

Lompoc's Ryan Morgan poses for a photo during his visit to Arizona State to play tight end.

Lompoc High seniors Jacob Nunez, left, and Ryan Morgan pose for a photo during a visit to Arizona State. The duo, who are cousins, has committed to Arizona State to play football.

Lompoc's Ryan Morgan runs against St. Joseph's Josiah Acosta during a game in September. Morgan has committed to play for Arizona State.

Lompoc's Ryan Morgan during his visit to Arizona State.

Lompoc's Ryan Morgan tries to shake off Dos Pueblos' Baylor Huyck and Conner Gleissner after catching a pass during a game in October.