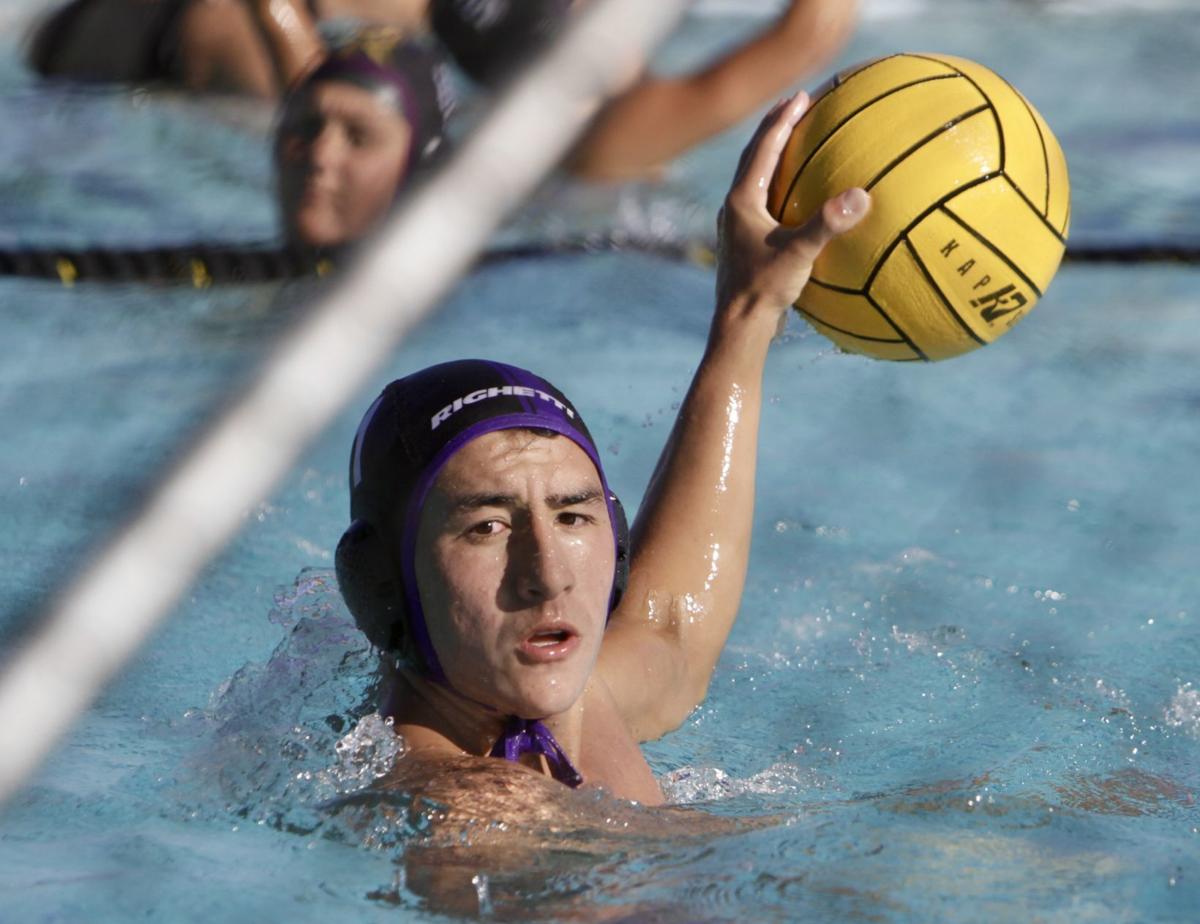 Righetti's Kai Karamitsos looks in on goal during a Mountain League game against Morro Bay this past season. Karamitsos was named the league's MVP and the Northern Santa Barbara County Athletic Round Table Scholar Athlete of the Year. 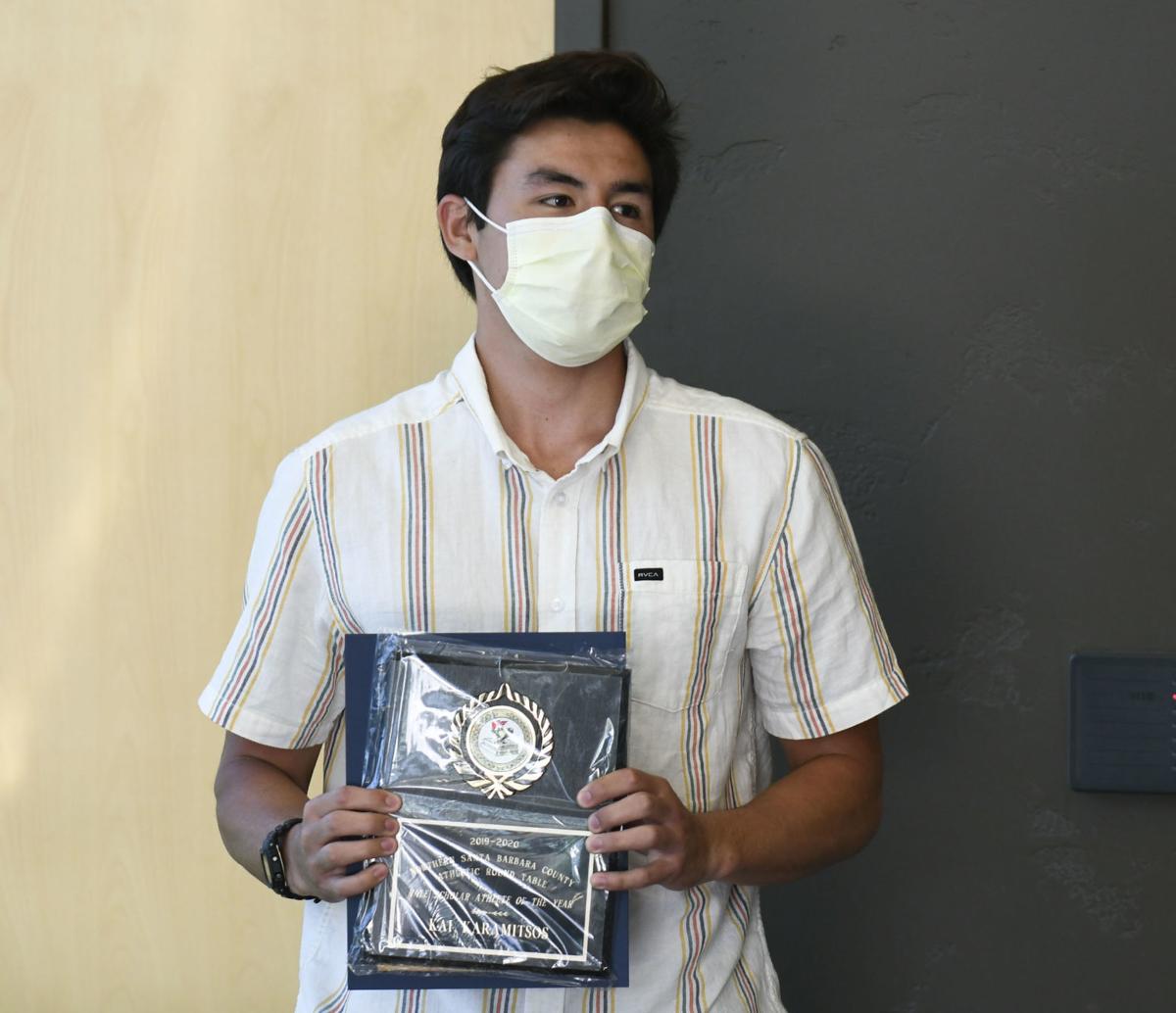 Righetti's Kai Karamitsos receives the Male Scholar Athlete of the Year scholarship during a presentation of awards for the 2020 Northern Santa Barbara County Athletic Round Table at the Joe Centeno Administration Building in Santa Maria in May. 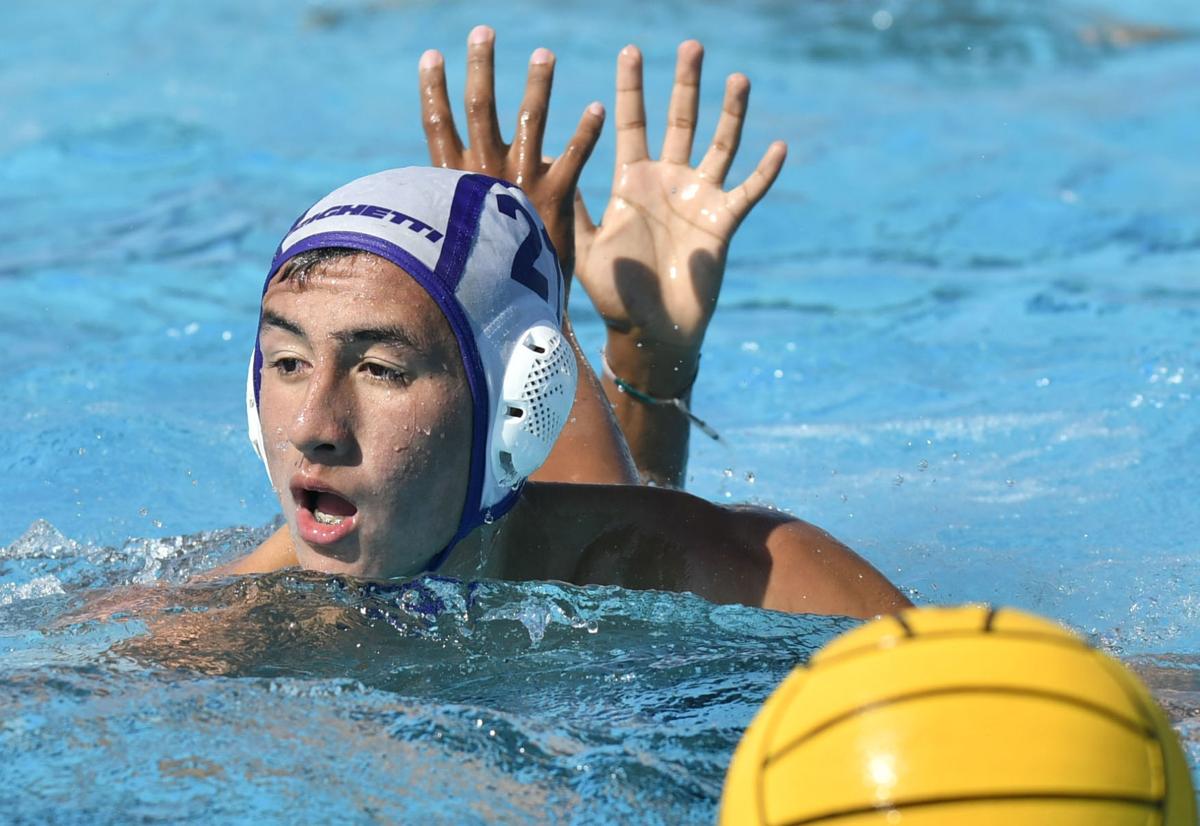 Righetti's Kai Karamitsos, seen as steals the ball from an Arroyo Grande player, was named Northern Santa Barbara County's Scholar Athlete of the Year and the Mountain League MVP in water polo.

When Kai Karamitsos graduated from Righetti High School in June, he did it as one of his school's most distinguished athletes and students.

The four-year water polo and swim standout earned league MVP honors as a senior and was ranked as one of the top students in his class with a GPA closer to 5.0 than 4.0.

For his efforts, Karamitsos was named the Northern Santa Barbara County Athletic Round Table's Scholar Athlete of the Year in May.

From the Vault: John Madden didn't just coach at Hancock College, he found a home on the Central Coast

Madden, who was Hancock's head football coach for the 1962 and 1963 seasons, didn't just coach football on the Central Coast. He wove himself into the fabric of the area.

But another act that separated Karamitsos from the pack is something that wasn't always seen.

While he was excelling in the classroom and the pool, leading Righetti to another league water polo title in front of packed stands, Karamitsos was doing what he could to get youngsters on a similar path. Karamitsos spent the little extra time he had as a volunteer coach for a youth water polo program that was run out of the Righetti High pool.

In that role, Karamitsos, who typically left his house at 5:45 a.m. to attend swim or water polo practice, would spend up to two extra hours on the pool deck as a coach.

"Righetti is a school with over 2,400 students and it's easy to get lost in the crowd, or worse yet, find yourself in the wrong crowd," Karamitsos said in his scholarship application for the Round Table. "I feel like a big brother welcoming them into our program and showing them the importance of camaraderie with their teammates and coaches. I had a similar experience as a cabin leader at the elementary school science camp."

With that approach, it's easy to see why Karamitsos was chosen as the Scholar Athlete of the Year for Northern Santa Barbara County. Before his final semester at Righetti wrapped up, Karamitsos carried a 4.71 GPA. He plans on studying environmental science or marine biology at UC Santa Barbara, where he also may try to join the highly-regarded water polo team -- if he gets the chance amid the COVID-19 pandemic.

"UC Santa Barbara has a really good program for both," Karamitsos said of his major choices.

The utility player was a water polo All-American at Righetti.

"There's a chance," Karamitsos said of possibly playing water polo at UCSB when he received his Scholar Athlete of the Year award in May.

Karamitsos wrote that he found dominance in the pool at Righetti despite having no experience in the sport before he entered high school.

"With no prior experience in water polo, through time commitment and hard work, I've developed into a high-level player," Karamitsos wrote in his scholarship application.

That title gave Nipomo High three CIF championships in its history: The football team and the boys swimming squad each won one when Nipomo was a member of the CIF Southern Section.

How did he become an MVP water polo player and top-ranked student ? Well, Karamitsos says it wasn't solely talent.

"My greatest strength is dedication -- to academics, athletics and social life," Karamitsos wrote. "...This isn't due to what some consider innate ability, but more so my strong work ethic."

Most of Karamitsos' days consisted of training in the morning for at least an hour, six hours of classes and more work in the pool for three hours before homework in the evening.

Andy Guyader has been Cabrillo's football coach for months. He still hasn't been able to meet his players in person.

Amid the coronavirus pandemic, Guyader has been forced to make all his first-year preparations in the digital world. He's developed video workout programs to help kids stay in shape and asked players to show their progress by submitting videos or photos of what they've been working on, with all communication taking place on Zoom or other digital services.

For Karamitsos, though, his efforts in high school just laid the foundation for his future at UCSB.

"In the next few years, I'll have to be more dedicated than ever, but I know I'll find a way to enjoy the challenge," he said.

Difference-makers: The late Joni Gray was an advocate for youth sports and the foundation of the Round Table

Active throughout her life in community events, Gray had a particular passion for the Round Table. She took over as the organization’s president in 2010.

Righetti's Kai Karamitsos looks in on goal during a Mountain League game against Morro Bay this past season. Karamitsos was named the league's MVP and the Northern Santa Barbara County Athletic Round Table Scholar Athlete of the Year.

Righetti's Kai Karamitsos receives the Male Scholar Athlete of the Year scholarship during a presentation of awards for the 2020 Northern Santa Barbara County Athletic Round Table at the Joe Centeno Administration Building in Santa Maria in May.

Righetti's Kai Karamitsos, seen as steals the ball from an Arroyo Grande player, was named Northern Santa Barbara County's Scholar Athlete of the Year and the Mountain League MVP in water polo.