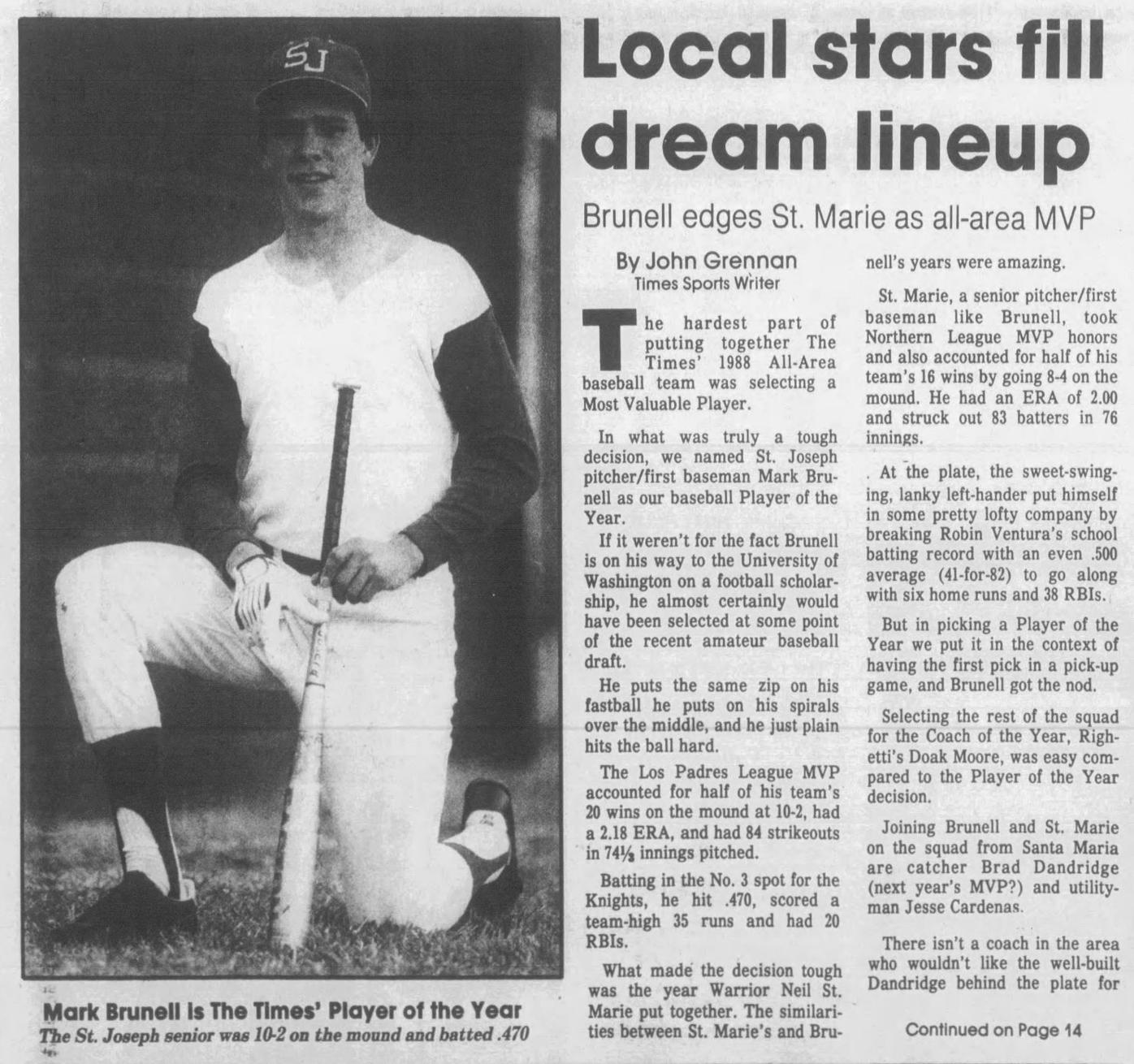 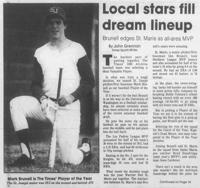 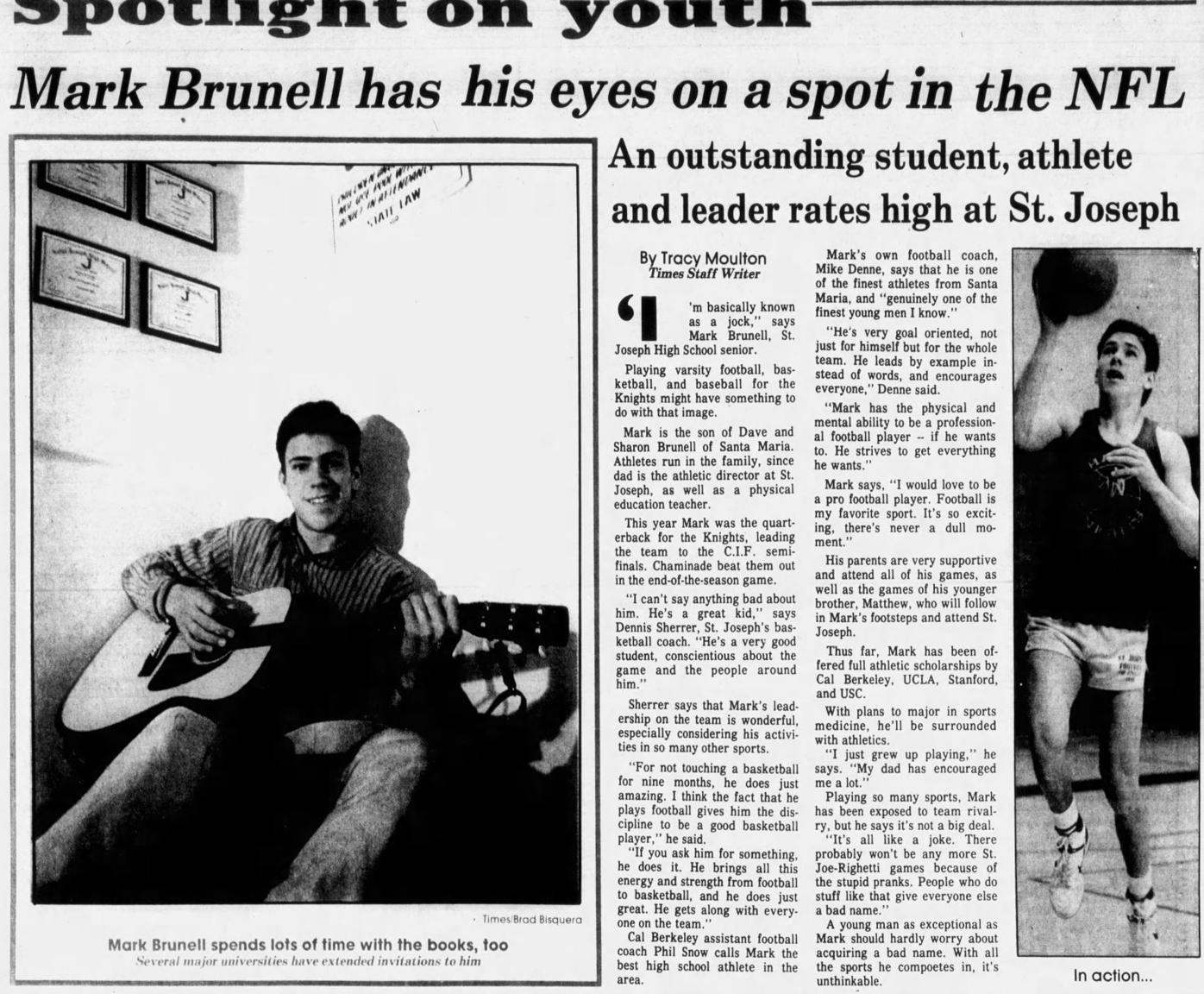 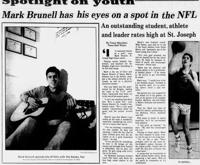 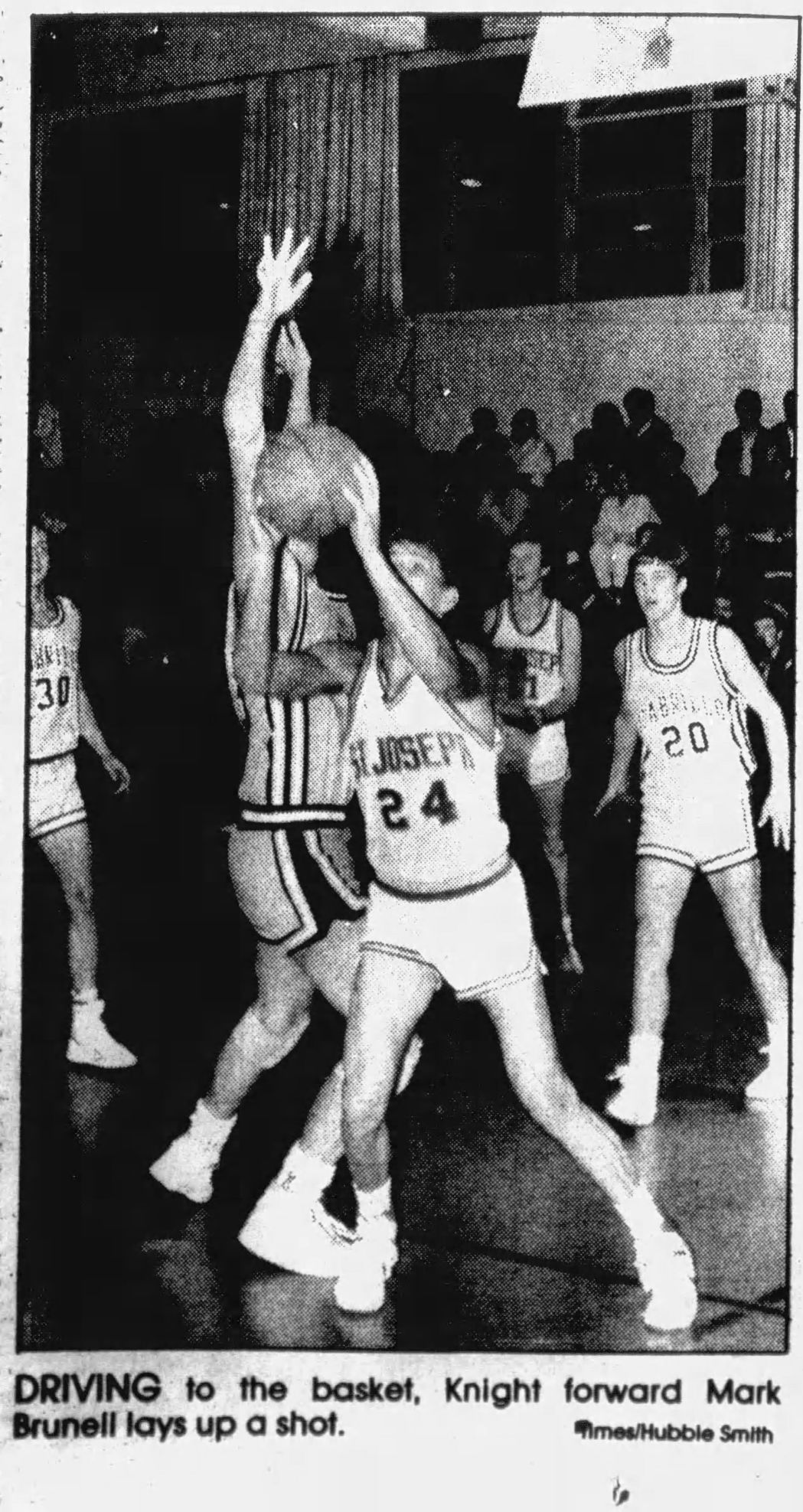 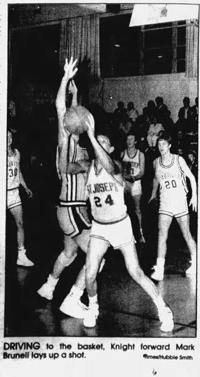 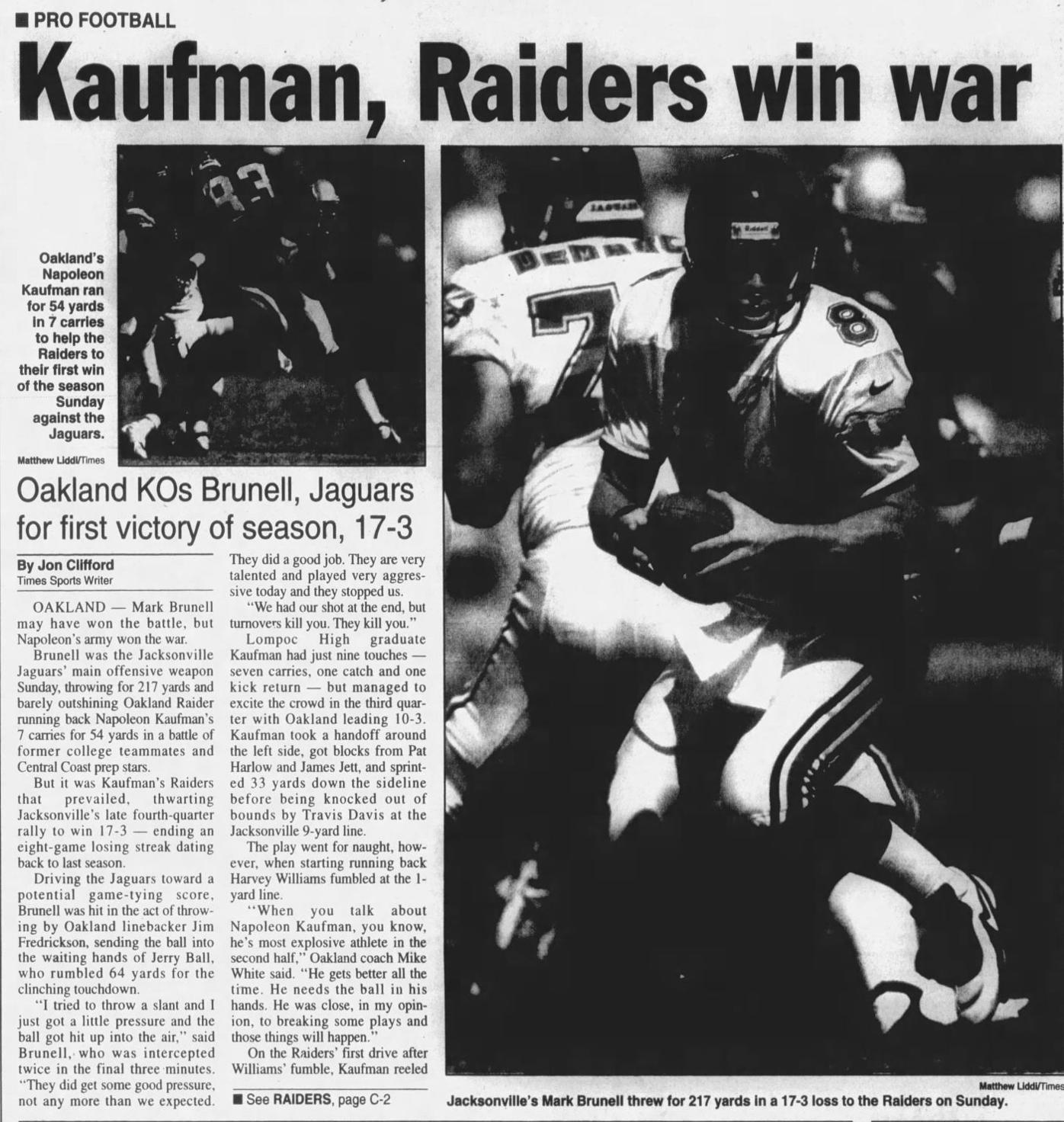 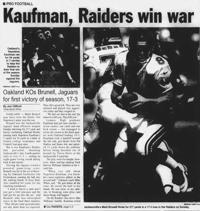 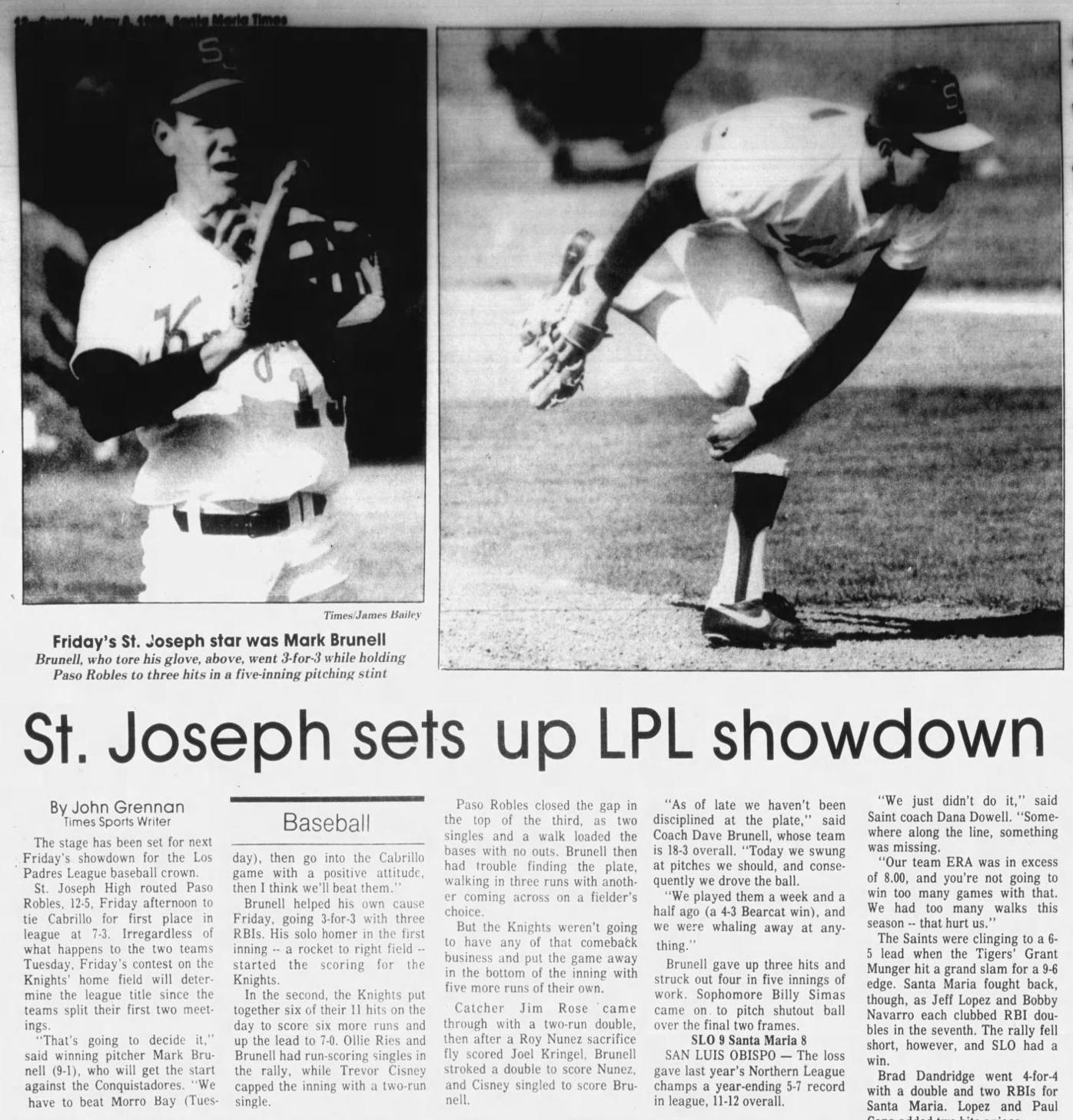 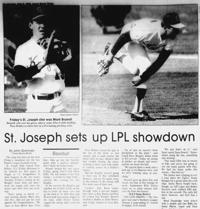 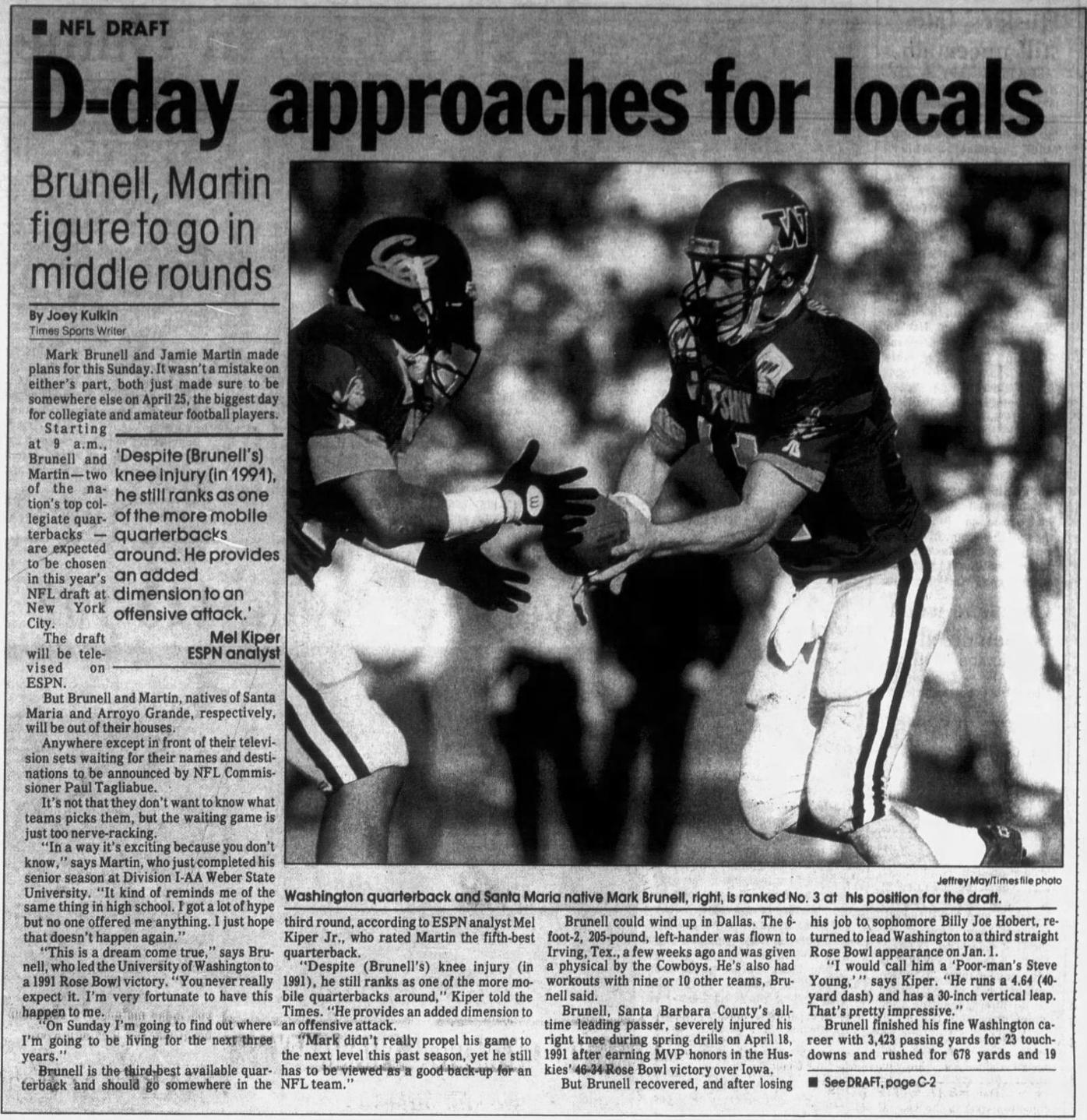 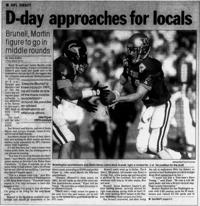 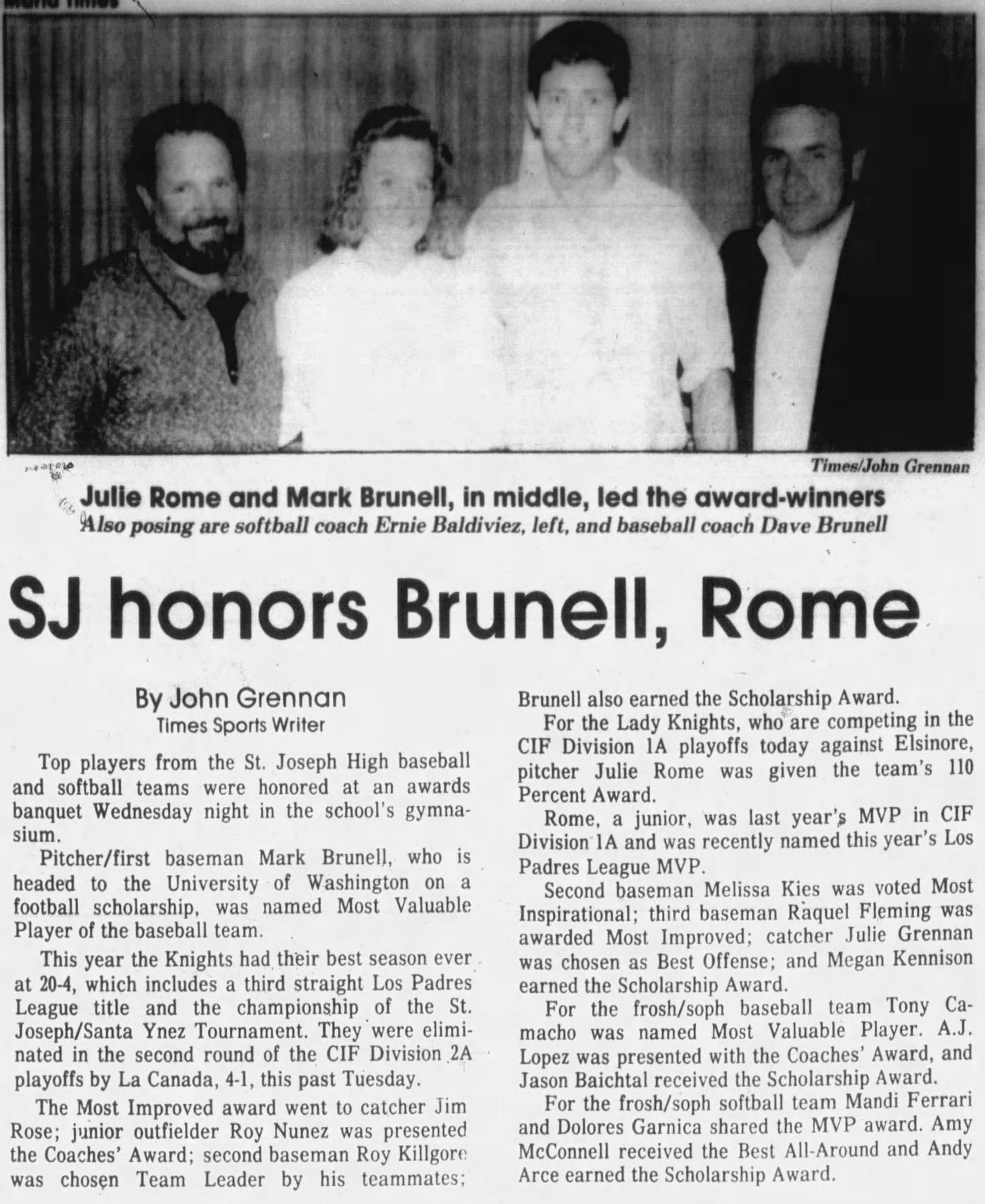 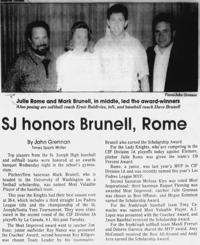 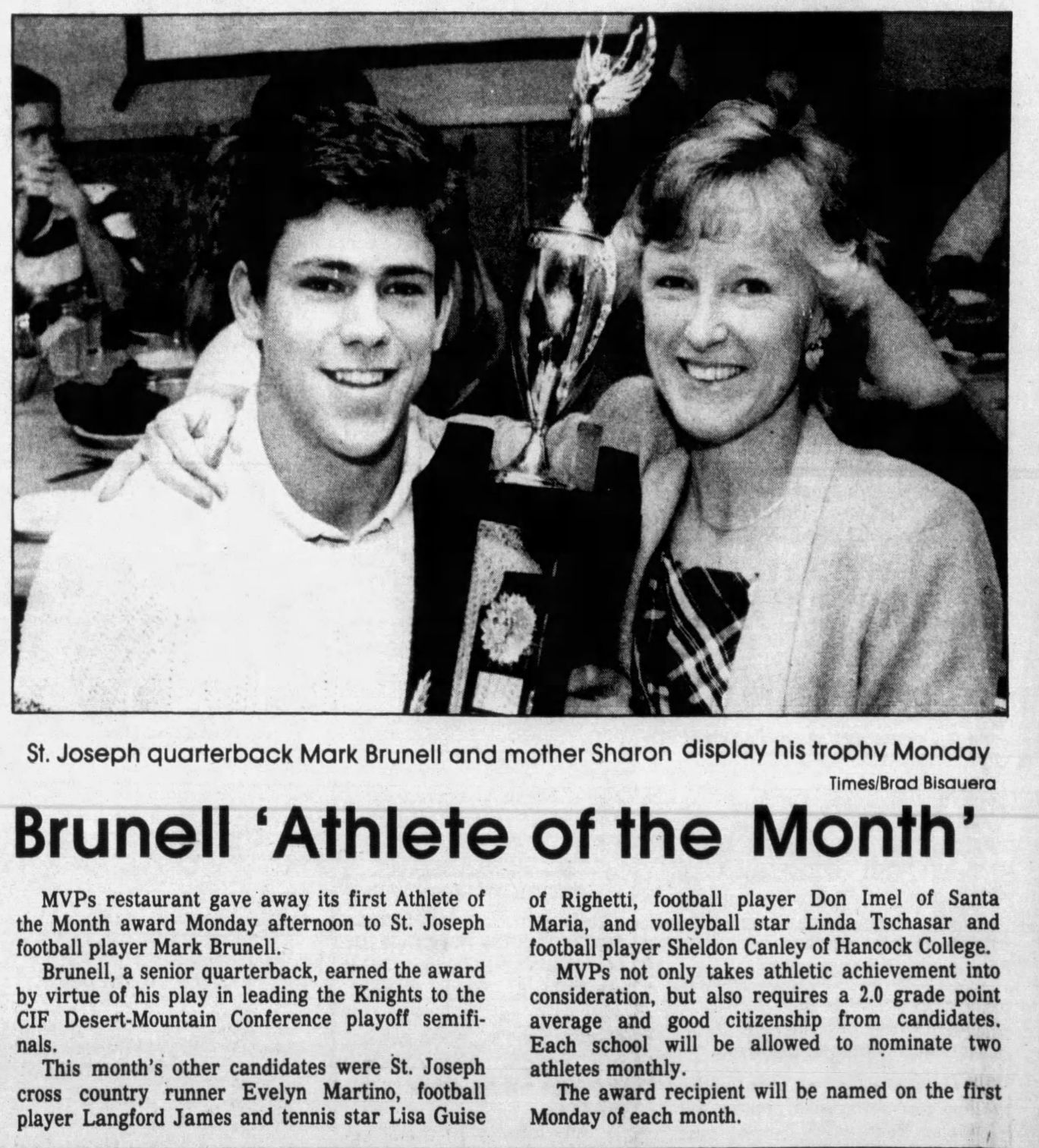 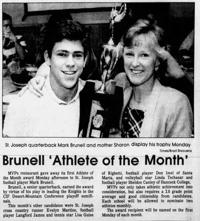 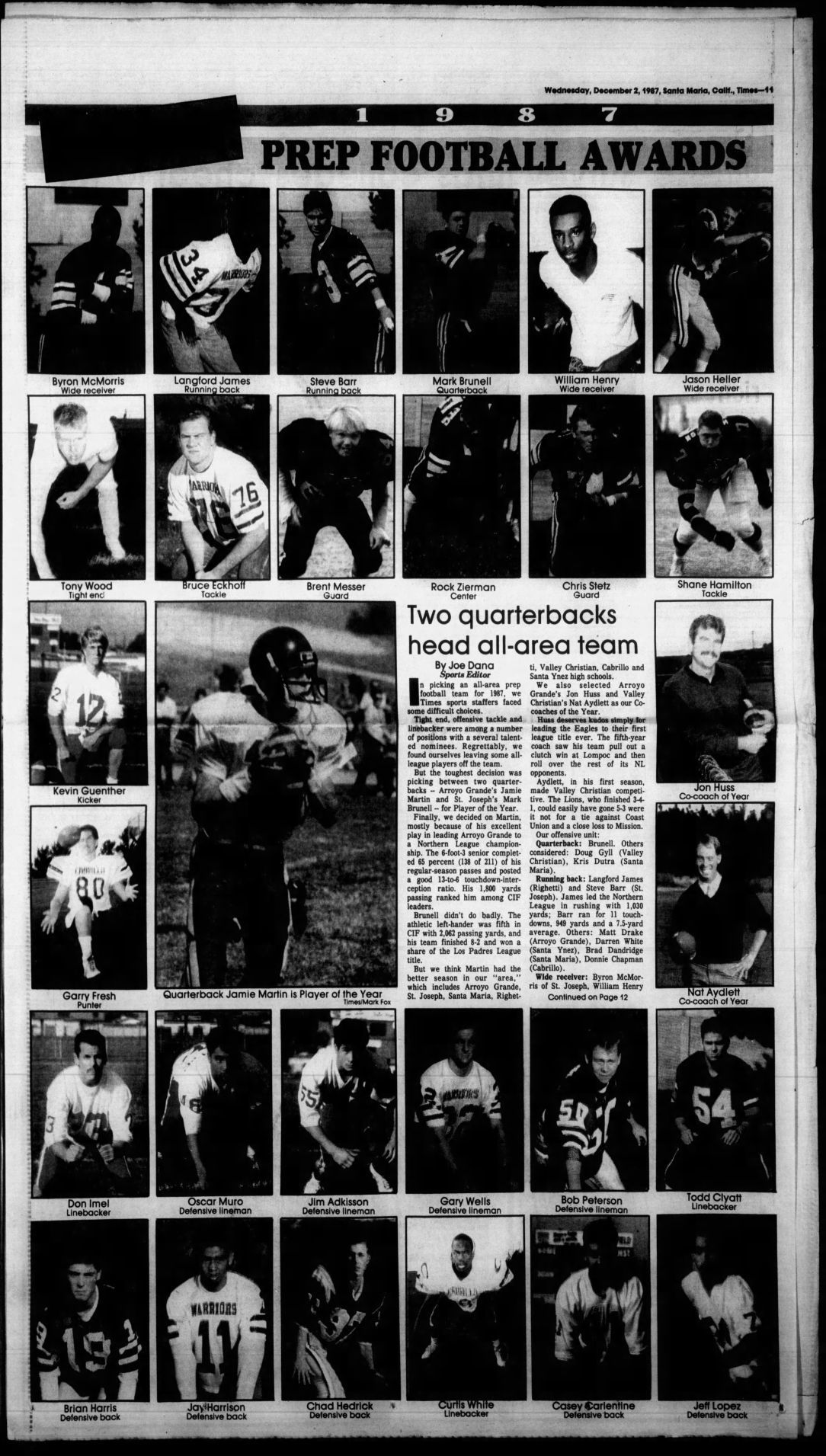 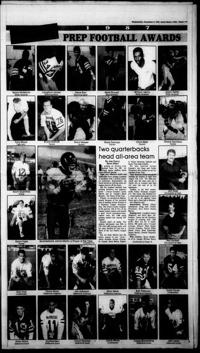 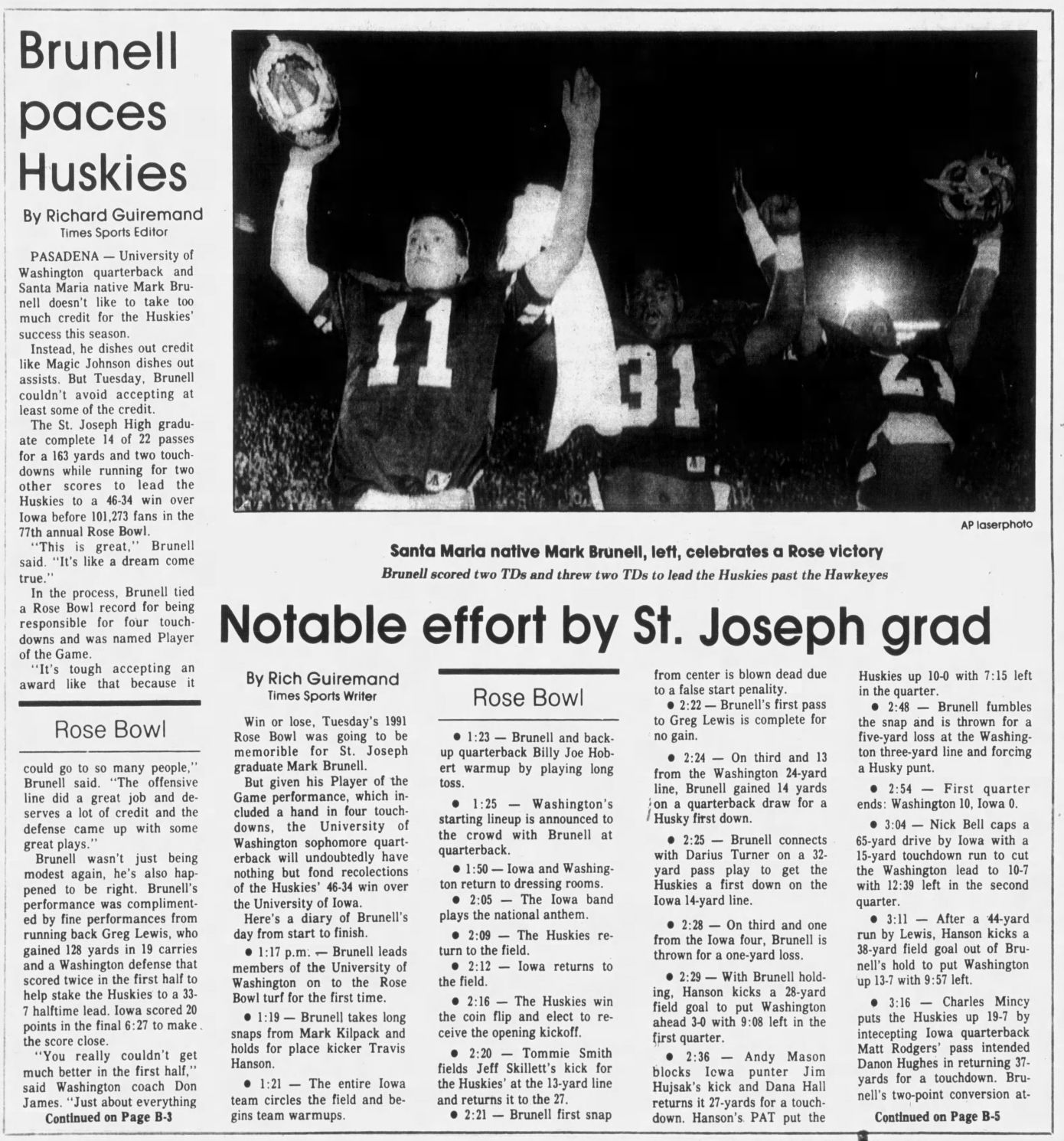 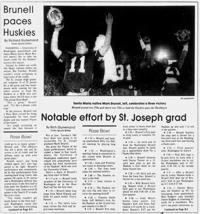 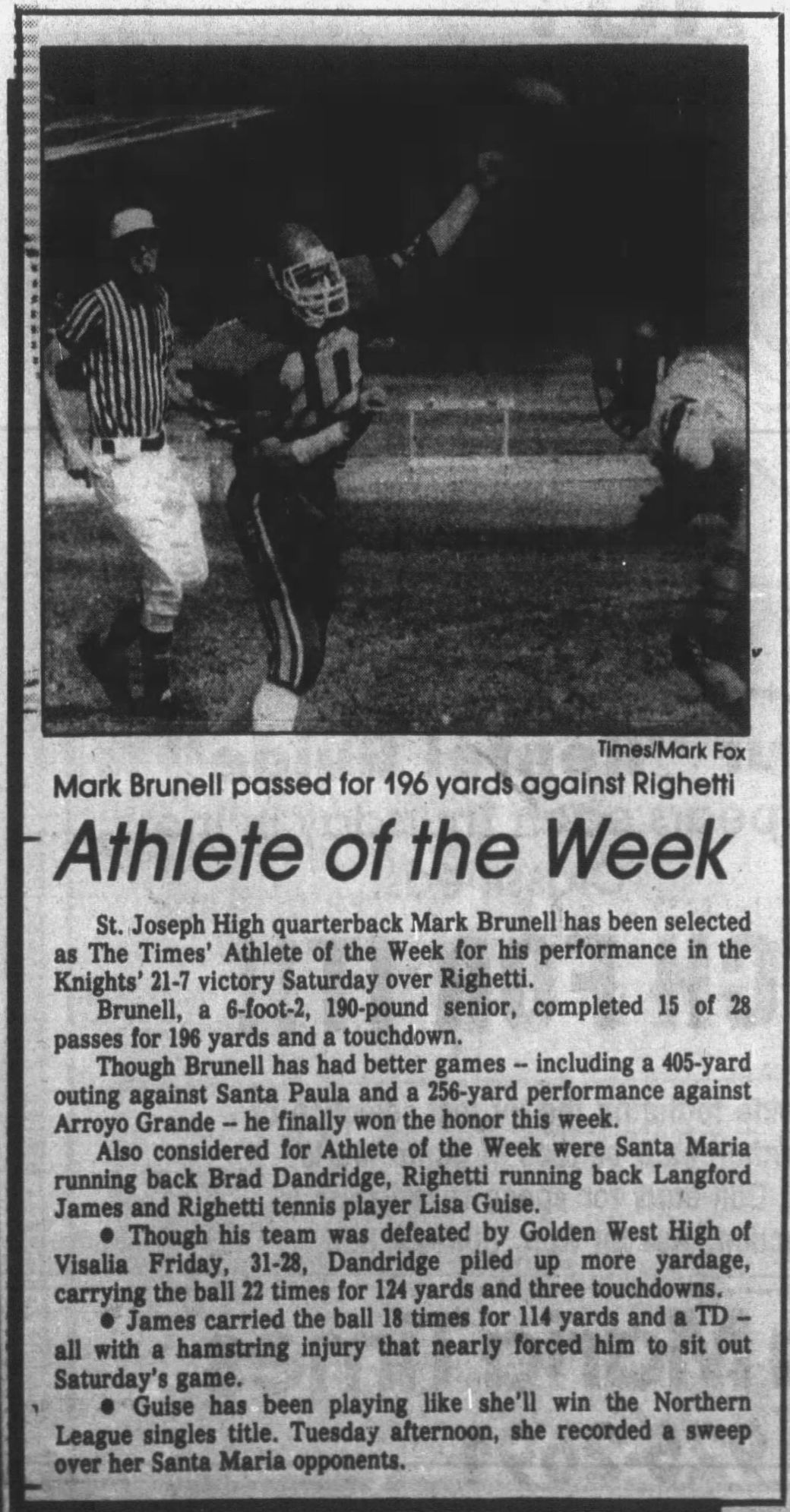 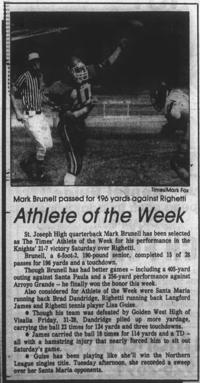 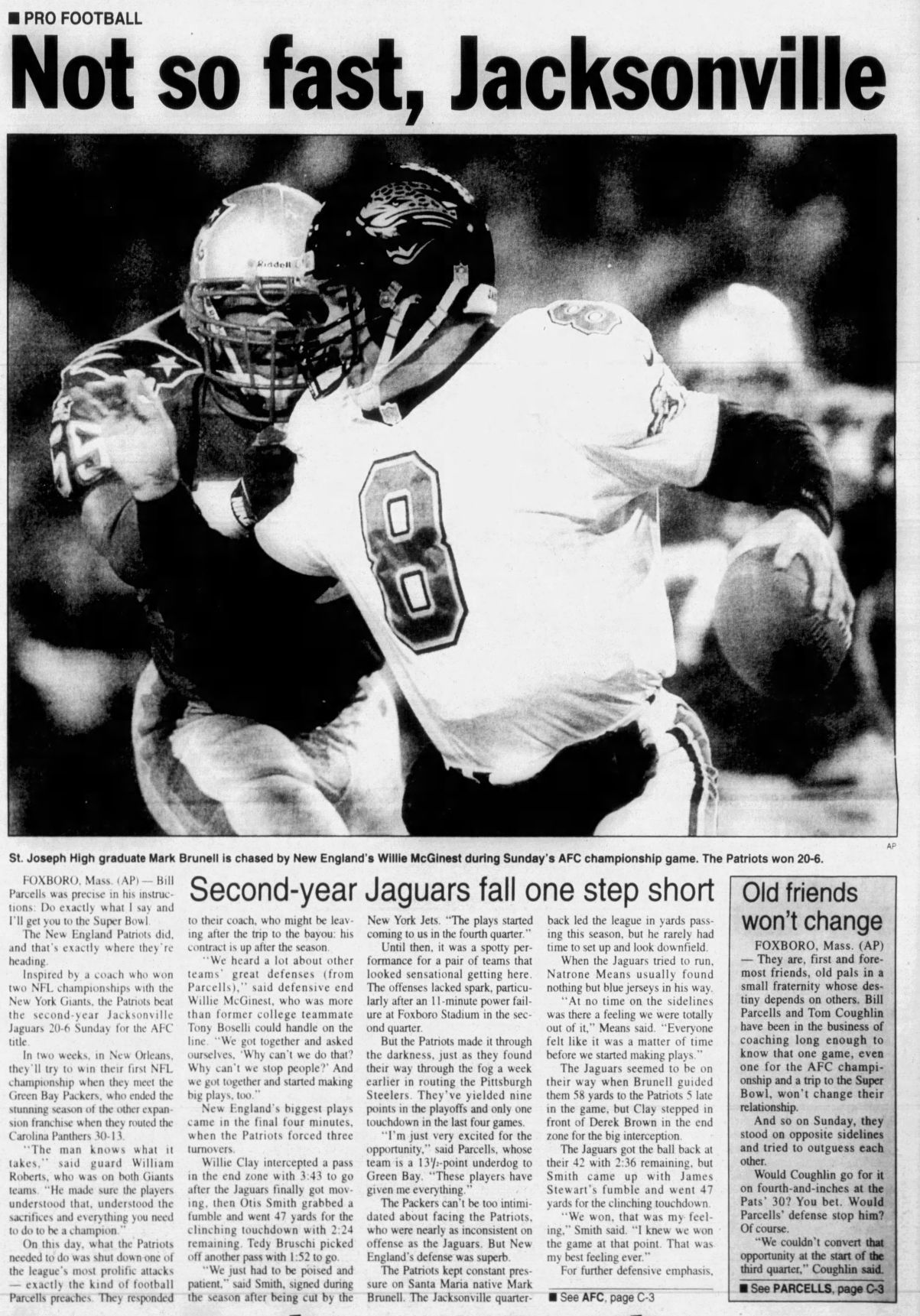 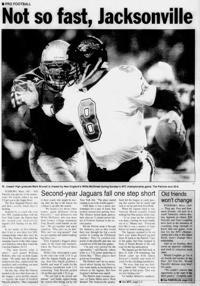 The most successful NFL player from Santa Maria.

Photos: Mark Brunell's journey from St. Joseph to the NFL

His journey football journey took him from St. Joseph High School to the University of Washington and, ultimately, the NFL.

And it was all documented in the Santa Maria Times. (Yet, just another example of the value of local journalism).

Here, in January of 1988, Mark is nearing the end of his St. Joseph High School career. He has offers on the table from USC, Stanford and UCLA, among others, to play football, but he's also a basketball and baseball standout that's beloved by his teachers, coaches and teammates.

The month prior, Brunell was named the Athlete of the Month at a ceremony at MVPs Restaurant after he led the Knights' football team to the CIF Desert-Mountain Conference semifinals. He poses for a photo with his mother Sharon.

A week before that, though, Brunell lost out as an honor to another future NFL quarterback.

Arroyo Grande's Jamie Martin was named the 1987 All-Area MVP by the Santa Maria Times. Look closely and you can see all the top players from the 1987 season in this solid layout job from the Times' design crew.

That season Brunell was a senior QB for the Knights and had some big-time performances, including a 405-yard effort against Santa Paula. He was named Athlete of the Week after leading St. Joseph past Righetti in a different game, throwing for 196 yards and a TD in a 21-7 win over the Warriors.

Later that season, in the second round of the playoffs, the Knights pulled out a 42-26 win over Santa Clara as Brunell carried the ball 10 times for 95 yards. The Knights would ultimately fall in the semifinals.

Brunell would go on to have a stellar spring for the St. Joseph baseball team and was named the All-Area MVP after racking up 10 wins on the mound while crushing it at the plate.

Don't forget that Brunell was also a standout basketball player at St. Joseph and likely had a future at the college in level in at least baseball and football and possibly basketball.

Then of course came the NFL in 1995. Brunell, the left-handed QB, was drafted by the Green Bay Packers in the fifth round and then ultimately traded to the expansion Jacksonville Jaguars two years later. Brunell then starred for Jacksonville.

Brunell helped the Jaguars to the AFC title game in their second season in 1996, after going 4-12 in their first season. Jacksonville finished 9-7 and made the playoffs after the 1996 regular season, Brunell and the Jaguars then beat Buffalo in the AFC wild card game and knocked off Denver 30-27 in the divisional round.

A win away from the Super Bowl, Brunell and the Jags lost to Drew Bledsoe and the Patriots 20-6 in the AFC Championship Game.

Brunell was later traded to the Washington Redskins prior to the 2004 season and then went to the New Orleans Saints, where he won a Super Bowl as Drew Brees' backup.

Brunell's NFL career ended in 2011 with the New York Jets.

After his NFL career, Brunell got into coaching, spending two seasons at Jacksonville Episcopal as head coach in 2013 and 2014.

With more than 100 years as your local newspaper, today and every Thursday, to reminisce and honor the rich history of the Santa Maria Valley, the Santa Maria Times editors will reach into the archives to give you "Throwback Thursday". To access this memory and more, subscribe to Santa Maria Times' digital archives at SantaMariaTimes.com/archives

More in Collection: 'From the Vault' series allows you to take a look back at our historic archives (10 of 12)