The Other Guys: Scotty Cusack was lightning in a bottle
Share this
1 of 3 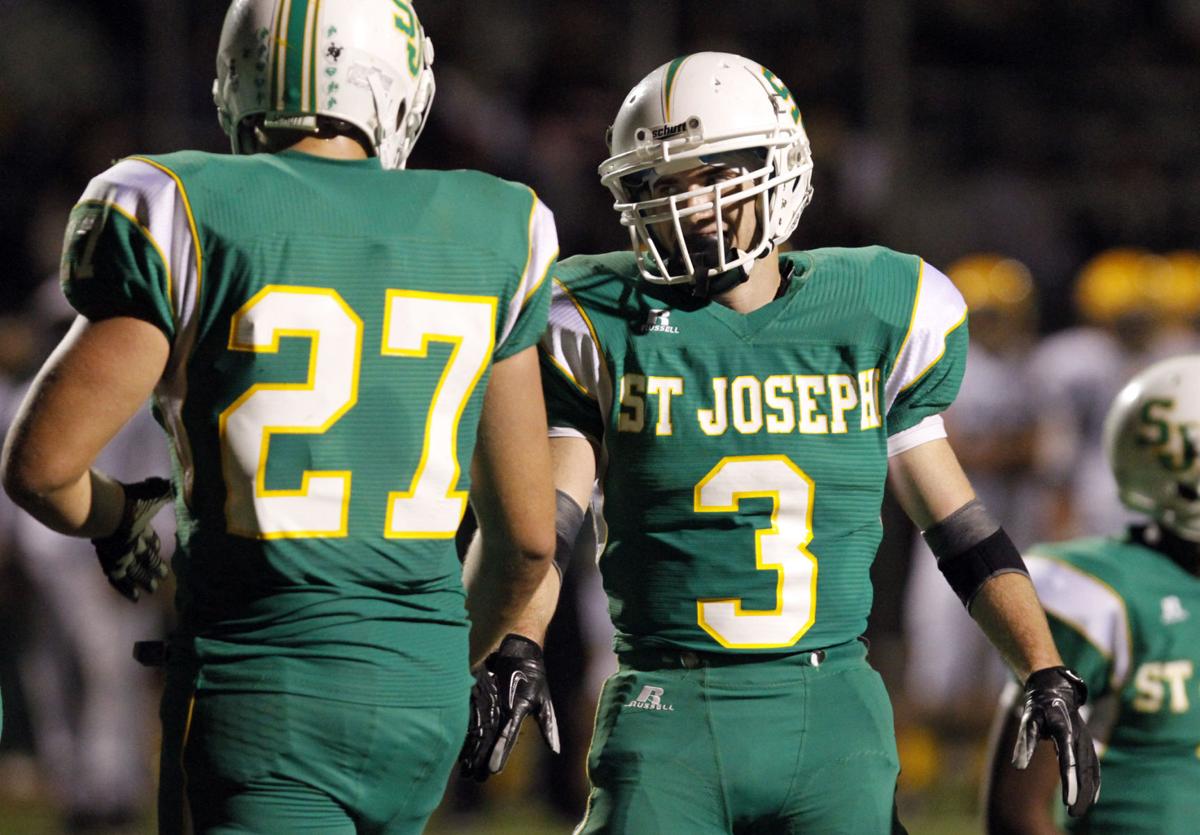 St. Joseph High School's Wesley Williams congratulates Scotty Cusack on a touchdown in a 51-28 win against West Bakersfield High School during the Knights homecoming game in 2012. 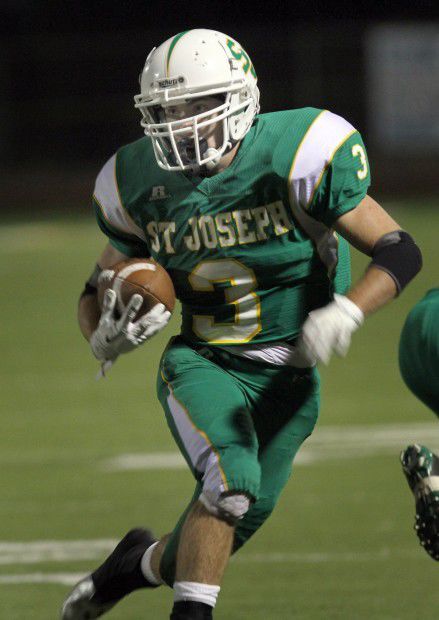 Scotty Cusack produced over 2,900 total yards for St. Joseph before graduating in 2013. 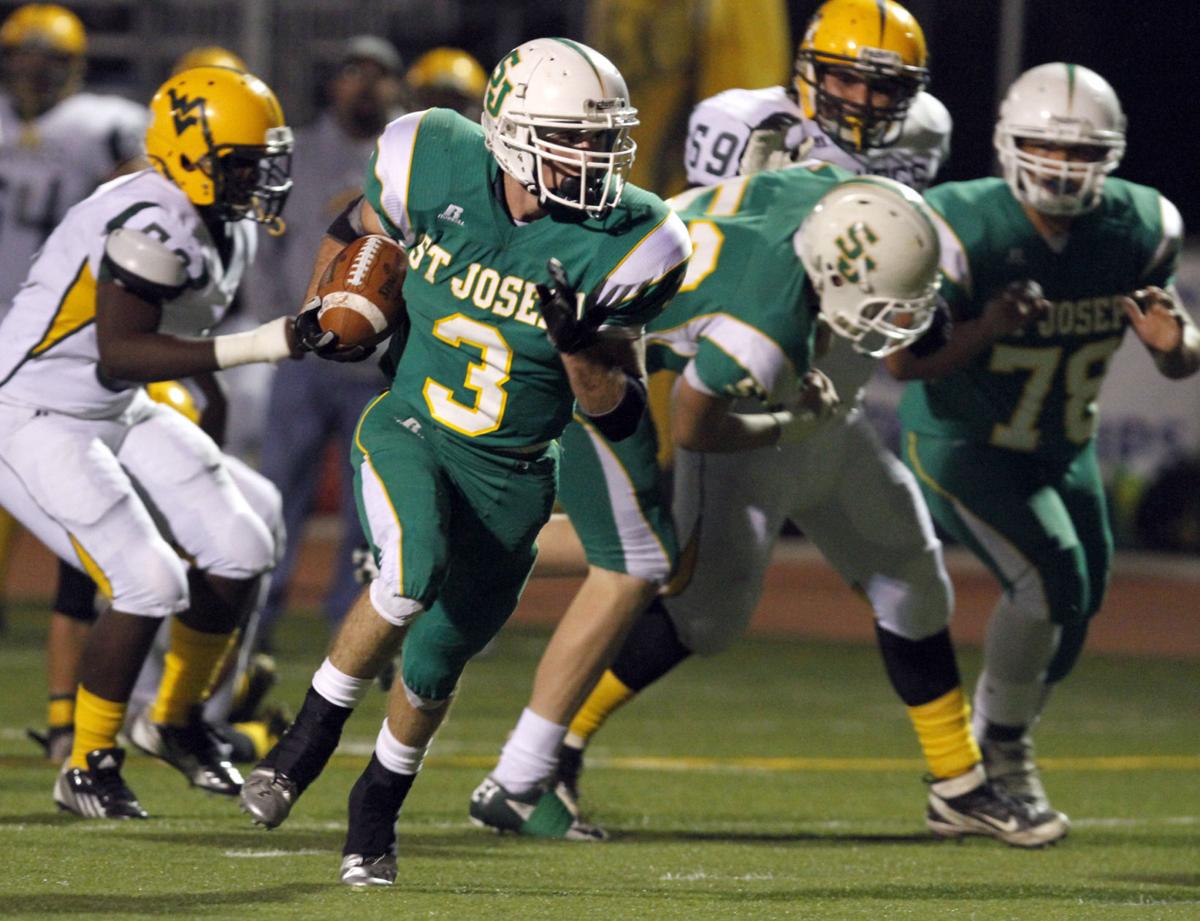 St. Joseph High School running back Scotty Cusack runs the ball in the 51-28 win against West Bakersfield High School in the Knights homecoming game in 2012.

And that's very true in football.

Sometimes you just have to trust your eyes.

Player of the Decade: Results from week one of voting.

It's taken awhile, but all Player of the Decade nominees have been announced.

Nevertheless, just by watching him play, you'd see he was one of the best the Central Coast had seen over the last decade.

Though Cusack's statistics aren't jaw-dropping, thanks mainly to a series of injuries, he still put together an impressive senior season.

Cusack, following in the footsteps of brothers K.J. and Patrick and his father Pat, was a lightning quick scatback for the Knights.

In fact, for his career, Cusack only has 124 documented carries, but those went for 1,389 yards and 17 touchdowns. (That means he scored a touchdown on 13% of his carries and averaged over 11 yards a carry).

But Cusack also caught 38 passes as a senior, taking those for 658 yards (17.3 yards a catch) and six more scores.

St. Joseph has Cusack playing 19 games in high school, scoring 28 total touchdowns, 17 on the ground, seven through the air and four on returns.

Cusack averaged over 150 yards a game when including kicks and punt returns, totaling 2,914 in 19 career games.

Gridiron success is expected in the Cusack family so much so that there was this statistic: Pat Cusack, older son Patrick and Scotty all held the record for longest kick returns in school history with each scoring on 97-yarders.

Cusack's career at St. Joseph is being highlighted as part of our "The Other Guys" series, which aims to feature standout football players who may have been overlooked during their careers. Submissions for athletes to be featured as part of the series can be sent to the author.

Former St. Joseph star Aly Beebe is the No. 1 seed.

Beebe, who helped the Knights win back-to-back CIF Southern Section titles during her freshman and sophomore seasons, won a CIF State title her junior season as she developed into one of the most dominant players in the entire state, if not the country.

Beebe signed with Stanford after graduating from St. Joseph in 2012, though never played for the Cardinal and eventually retired after numerous injuries to her knee.

No. 2 Ashlyn Herlihy vs. No. 15 Ravynn Anielski

Arroyo Grande graduate Ashlyn Herlihy is the No. 2 seed. Herlihy averaged 22 points, 9.7 rebounds, 1.4 steals and 5.5 blocks per game as a senior at Arroyo Grande. She was named the Times' All-Area MVP as a junior.

Herlihy went on to play at Santa Clara. She redshirted there in 2016-17 and has grown into a starting role the last two seasons, averaging over 10 points and 7 rebounds a game.

Herlihy will face No. 15 seed Ravynn Anielski in the first round.

Anielski was named the Times' All-Area MVP that year and she earned Ocean League MVP honors.

Former Righetti standout Molly Schlemer is the No. 3 seed. The 6-foot-5 post averaged 15 points and 8.3 rebounds a game in her final season with the Warriors. She also blocked 2.5 shots a game.

Schlemer will face No. 14 seed Syenna Ramirez. She averaged over 17 points a game as a senior at St. Joseph, going from role player to the best player on her team.

Ramirez culminated her St. Joseph career with a 427-point senior season. In addition to scoring 17 points, Ramirez added 2.2 assists, 4.3 rebounds and 3.3 steals per game that season.

Another former Righetti star, Mariah Cooks, is the No. 4 seed. Cooks was named the PAC 7 League MVP as she averaged 21.7 points per game and 12 rebounds in league play as a senior.

She led the Warriors to the quarterfinals of the playoffs averaging 22 points and 12.6 rebounds per game. She also earned All-CIF honors. Cooks went on to play four seasons at Washington State in the Pac-12.

Cooks will face Simone Swain, the No. 13 seed, in the first round. Swain won a CIF-SS title at Valley Christian.

Tatiana Dunlap, another former St. Joseph standout, is the No. 5 seed. Dunlap, an all-time great defender, scored over 1,300 points in three seasons with the Knights.

During her senior season, the 5-foot-8 guard averaged 23.7 points, 3.0 assists, 9.2 rebounds and 2.6 steals per game as the Knights went 19-9. Dunlap played at Cal State San Bernardino and Cal Lutheran.

Santa Ynez grad Hailey King, the No. 12 seed, will face Dunlap in the first round.

King, who suffered a torn ACL and missed nearly all of her junior season before she made it back to the Pirate lineup as a senior in 2010-11, scored 427 points in her final prep season, leading Santa Ynez to the Los Padres League title, the Pirates' most recent league championship in girls hoops. King played at Cal State Fullerton.

No. 6 Kaitlyn Flowers vs. No. 11 Danielle Morgan

Morgan topped 1,000 career points with the Braves, finishing her prep career with 1,186 points.

Erin Jenkins, the former Cabrillo standout, is the No. 7 seed. Jenkins and Beebe are the only back-to-back All-Area MVPs of this past decade.

Jenkins currently plays at Northwest Nazarene University. Jenkins averaged 20.3 points, 8.6 rebounds, 3.4 assists and 3.3 steals per game as a senior with the Conqs.

Jenkins meets the No. 10 seed, Shnyia Tell, in the first round. Tell earned one All-Area MVP honor during her time at Pioneer Valley.

At 5-foot-10, Tell averaged 10 rebounds a game for her entire four-year varsity career. She averaged a double-double in both her junior and senior seasons.

No. 8 Danita Estorga vs. No. 9 Heather Madrigal

Danita Estorga, yet another former Righetti great, is the No. 8 seed. Estorga, currently playing at Biola University, averaged 15.6 points, 8.2 rebounds, 2.8 assists, 2.5 steals and 1.4 blocks per game over her final two seasons with the Warriors.

She helped Righetti go 47-10 in the final two years with the program. They went 26-2 in league those two seasons.

Estorga will meet Heather Madrigal, the No. 9 seed, in the first round. Madrigal won four CIF titles in four years in high school, winning either a CIF State championship or a CIF Southern Section crown every year.

Madrigal went 48-0 in league in high school, spending the first three years at St. Joseph before transferring to Arroyo Grande.

"His presence will definitely be missed, on the sidelines and in the lives of those who knew and loved him:” Ben Castro, youth basketball coach, dies at age 44

“(Coach Ben) made sure being on the team felt like you were part of a family," Alijah Paquet said. "I want to thank him for allowing me to become best friends with people I probably would not have otherwise met.”

Bailey: Why did CIF Southern Section opt for 10-game football season with no bye weeks?

But one question I haven't been able to quite figure out: Why did the CIF Southern Section choose to forego a bye week for the football season, forcing all member schools that are playing a 10-game season to play all 10 games in consecutive weeks.

Nipomo and Arroyo Grande high school student-athletes began voluntary on-campus workouts Oct. 5. This week, the athletes were finally able to use some athletic equipment. But they could never, under any circumstance, share that equipment with a teammate.

St. Joseph High School's Wesley Williams congratulates Scotty Cusack on a touchdown in a 51-28 win against West Bakersfield High School during the Knights homecoming game in 2012.

Scotty Cusack produced over 2,900 total yards for St. Joseph before graduating in 2013.

St. Joseph High School running back Scotty Cusack runs the ball in the 51-28 win against West Bakersfield High School in the Knights homecoming game in 2012.