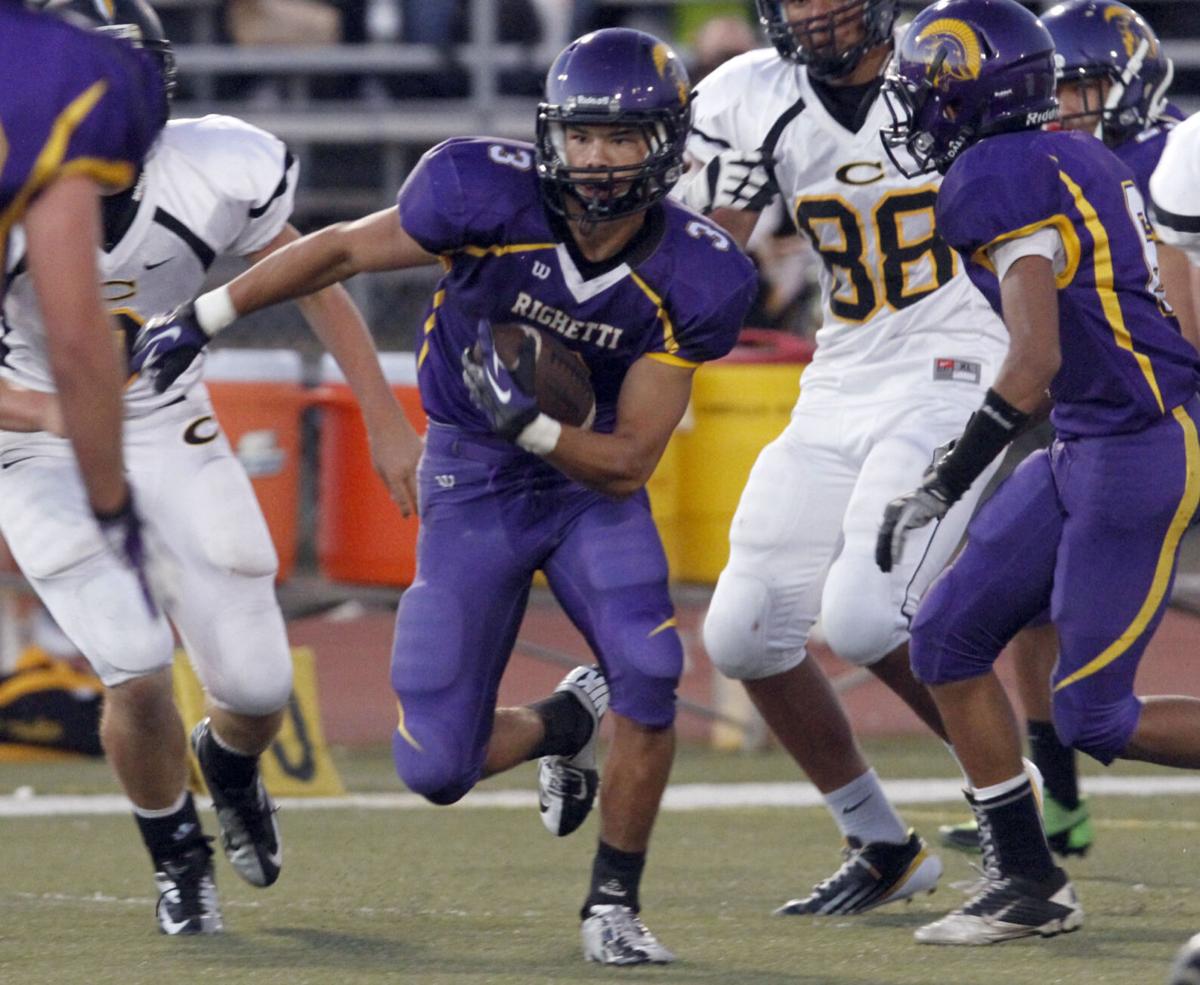 Righetti High School's Luke Wilson carries the ball through traffic in a 55-15 win against Cabrillo High School in 2012. 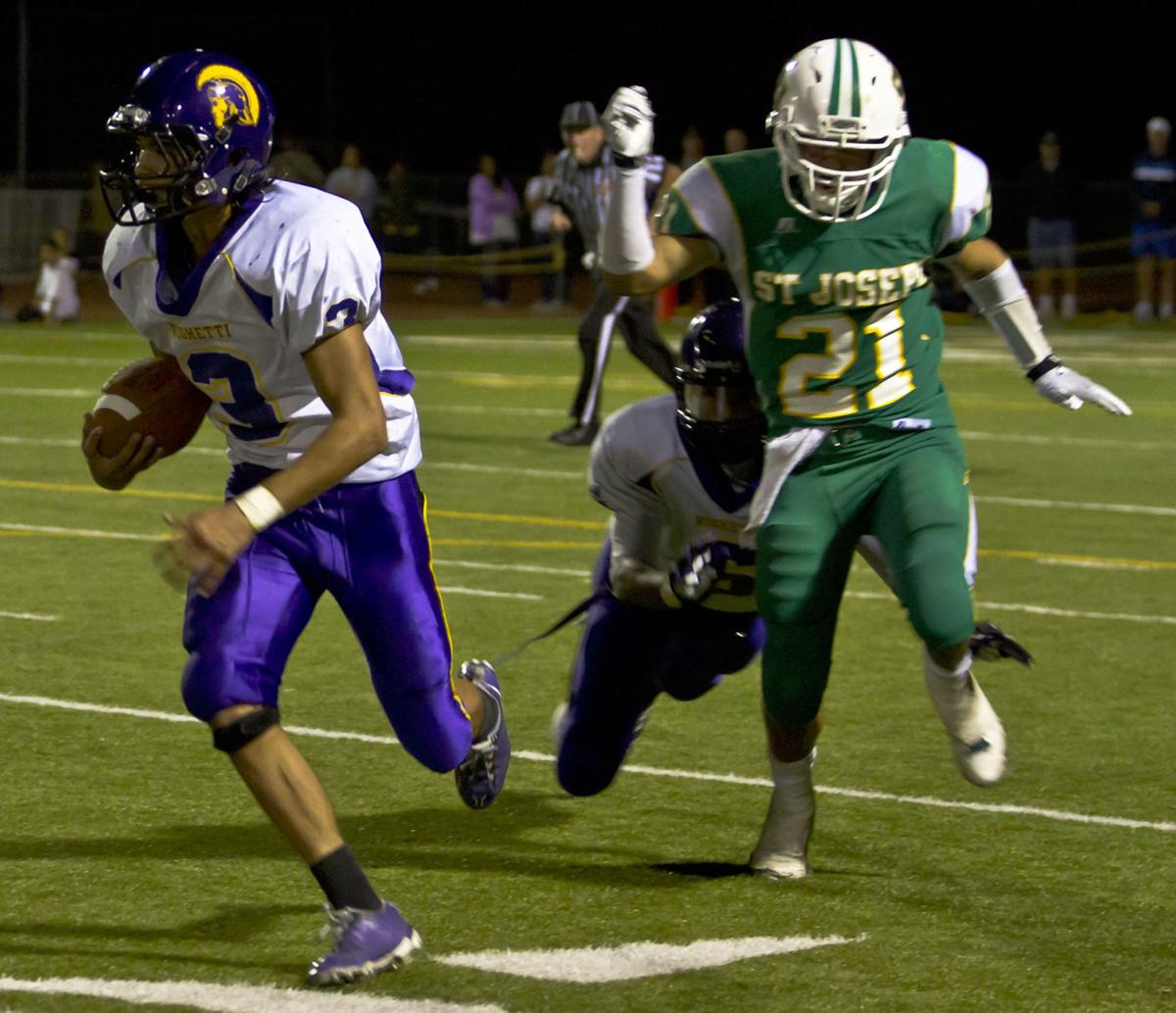 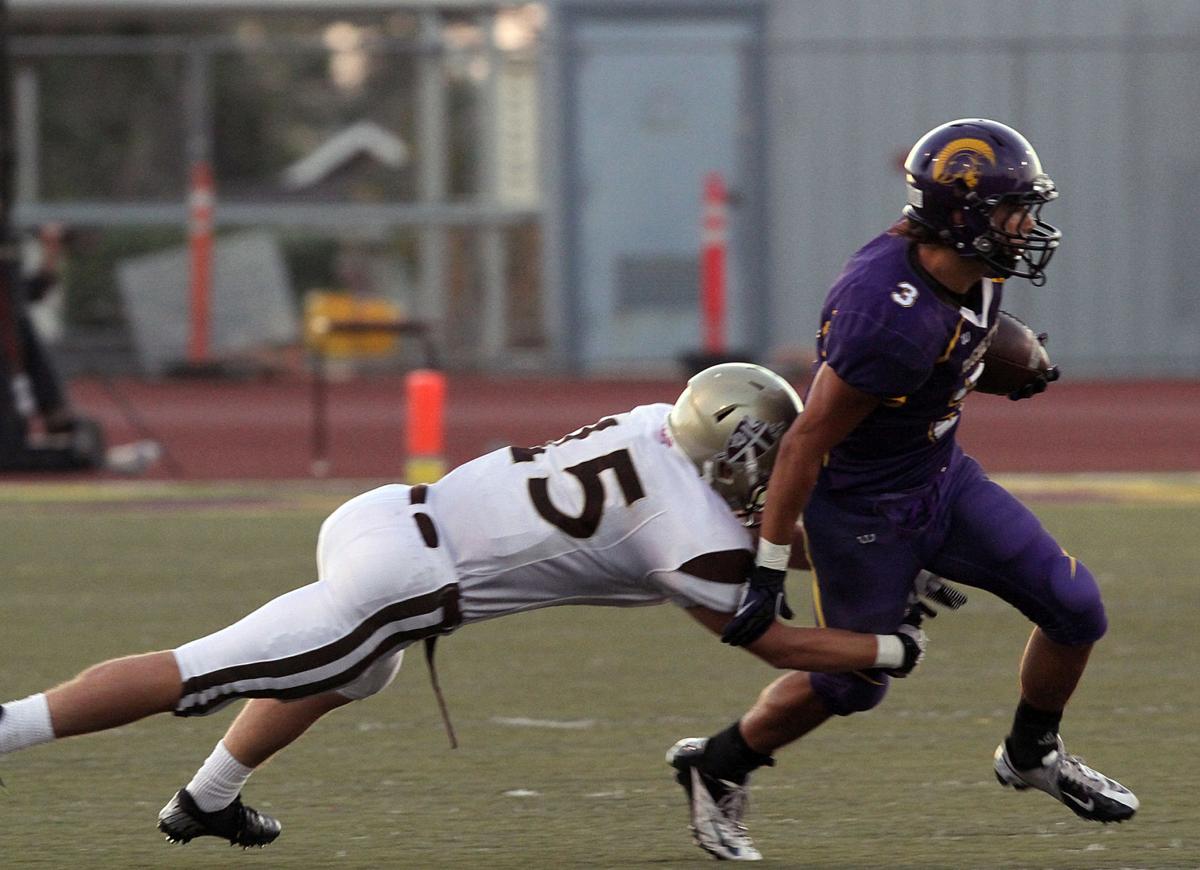 Righetti High's Luke Wilson fights off tackles as he runs the ball against visiting St. Francis High School in September of 2012.

Luke Wilson had a historic athletic career at Righetti High.

But Wilson did it. He also went on to wrestle at Cal Poly, battling through an injury-plagued career with the Mustangs.

Though Wilson achieved remarkable individual success on the mat at Righetti, let's not forget how good the kid was in the ultimate team sport: Luke Wilson was also a hell of a football player.

Wilson, who played under his father Gary, was a standout defensive back and receiver for the Warriors. He formed a dynamic duo with quarterback Troy Prober in 2012 as Wilson caught 68 passes that year for 1,064 yards and seven touchdowns.

Wilson had some monster games that season. He finished with 11 grabs for 140 yards and a score vs. Paso Robles. He had 176 yards on nine catches with three scores and somehow the Warriors lost 38-35 to San Luis Obispo. The following week, Wilson had eight catches for 160 yards in a tough 46-34 loss to Arroyo Grande.

Wilson had at least 80 receiving yards in eight of the 10 games the team played and at least 60 yards in every single game, though the Warriors finished 3-7 overall and 2-4 in the PAC 7.

Though he was clearly his team's best receiver, Wilson was also his team's best defensive player. He averaged nearly 14 tackles a game that year, finishing with 138 total tackles in the 10 games. He had double-digit tackles in nine games, finishing the season with a 21-tackle effort against Pioneer Valley. He had 18 stops against Atascadero in a 31-14 win and 16 tackles in a 55-15 win over Cabrillo.

For his career, Wilson caught 77 passes for 1,156 yards and seven touchdowns. He made 106 solo tackles and 214 total tackles in two seasons, intercepting six passes in 18 varsity games for which stats are available.

Following that stellar football season, Wilson won his state title in wrestling. He was the second seed in his weight class as he went 5-0, winning by pin twice in Bakersfield. He went 41-2 on the mat his senior year.

The Other Guys: Lompoc's Nikko Hayes was fun to watch

Wilson red-shirted at Cal Poly in 2013-14 and missed the entire following season due to three surgeries he underwent. Wilson was finally healthy enough to wrestle in 2016-17 won 10 of his 26 matches.

Hancock College athletes get back on the grind

After what Hancock College Athletic Director Kim Ensing described as a time consuming, painstakingly careful process, Hancock student-athletes have resumed on-campus workouts in the midst of the COVID-19 pandemic.

“Before they can begin (workouts), athletes have to complete a COVID-19 questionnaire and get a temperature check,” Ensing said.

Righetti High School's Luke Wilson carries the ball through traffic in a 55-15 win against Cabrillo High School in 2012.

Righetti High's Luke Wilson fights off tackles as he runs the ball against visiting St. Francis High School in September of 2012.