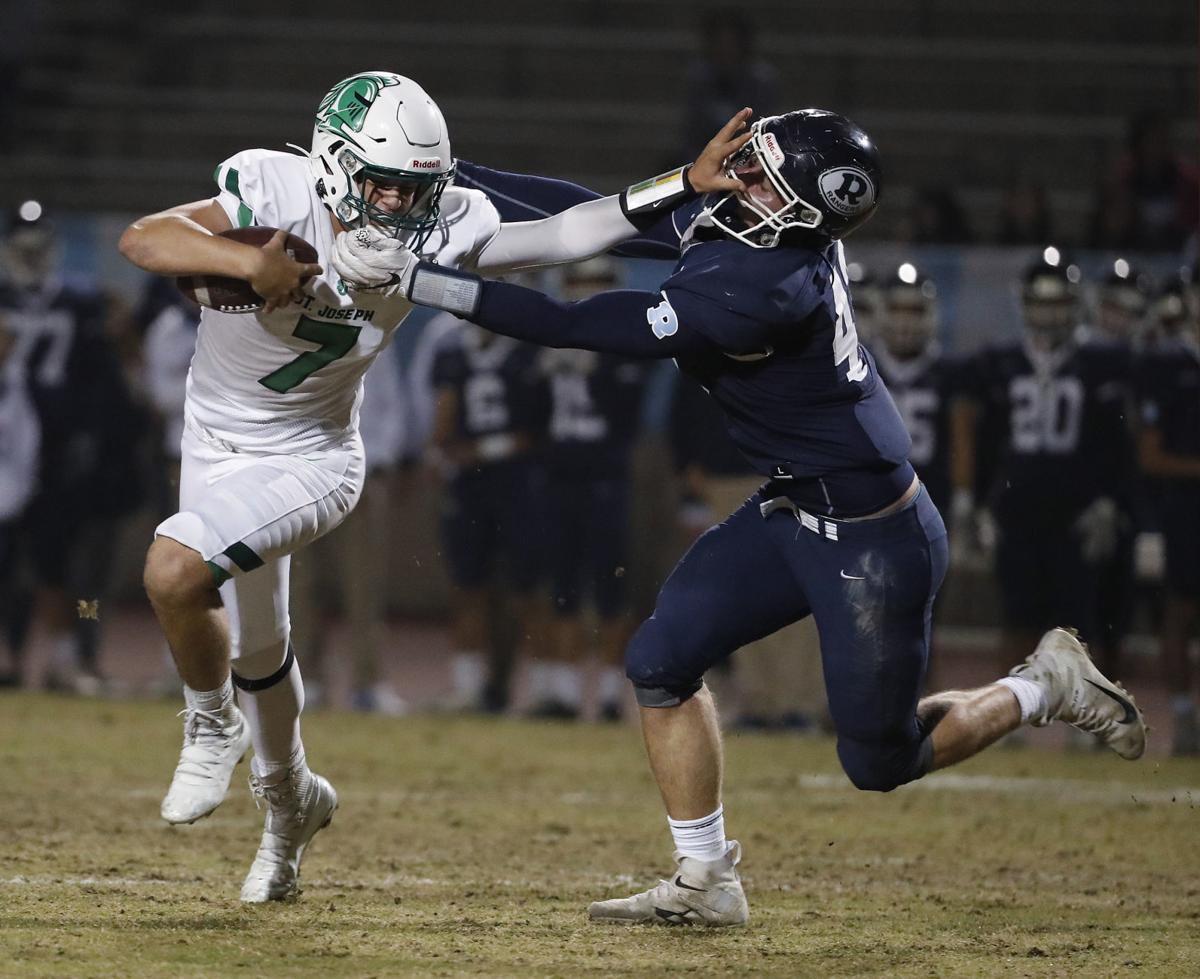 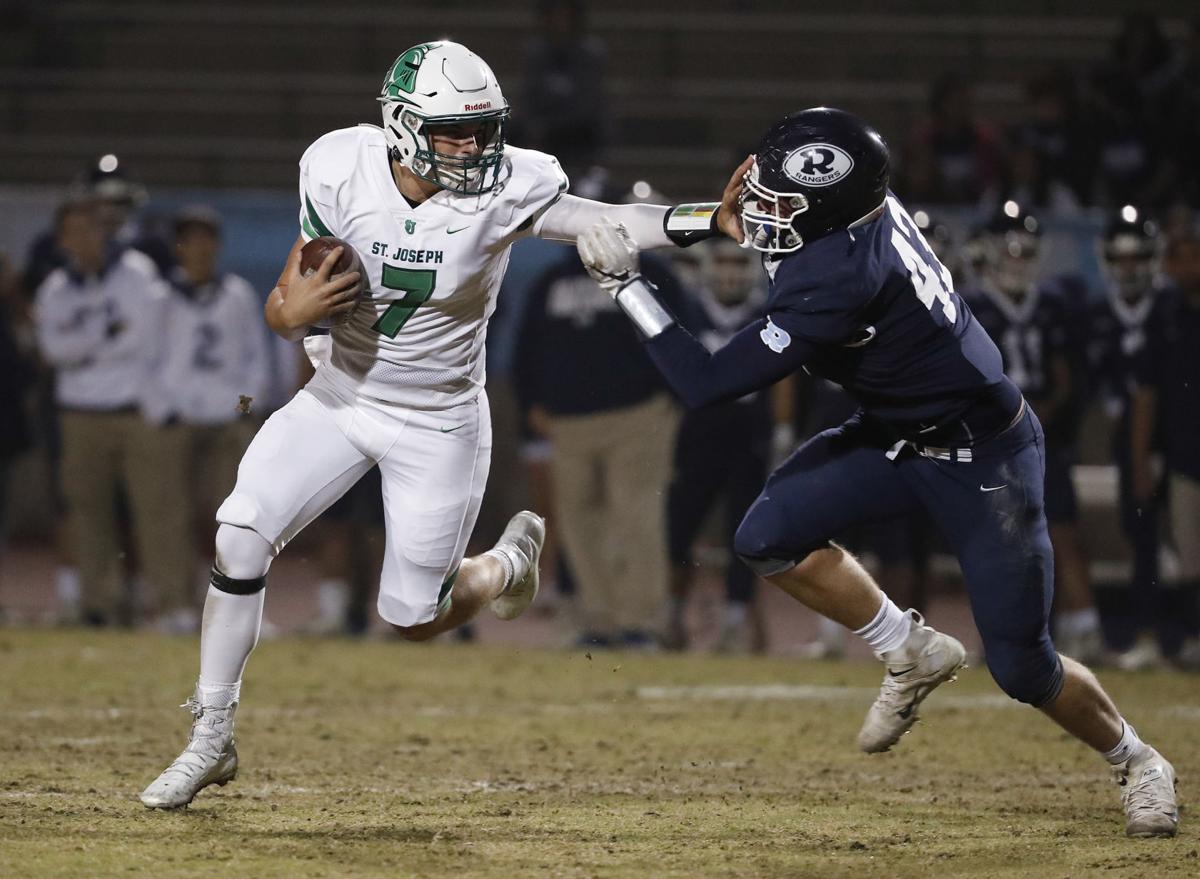 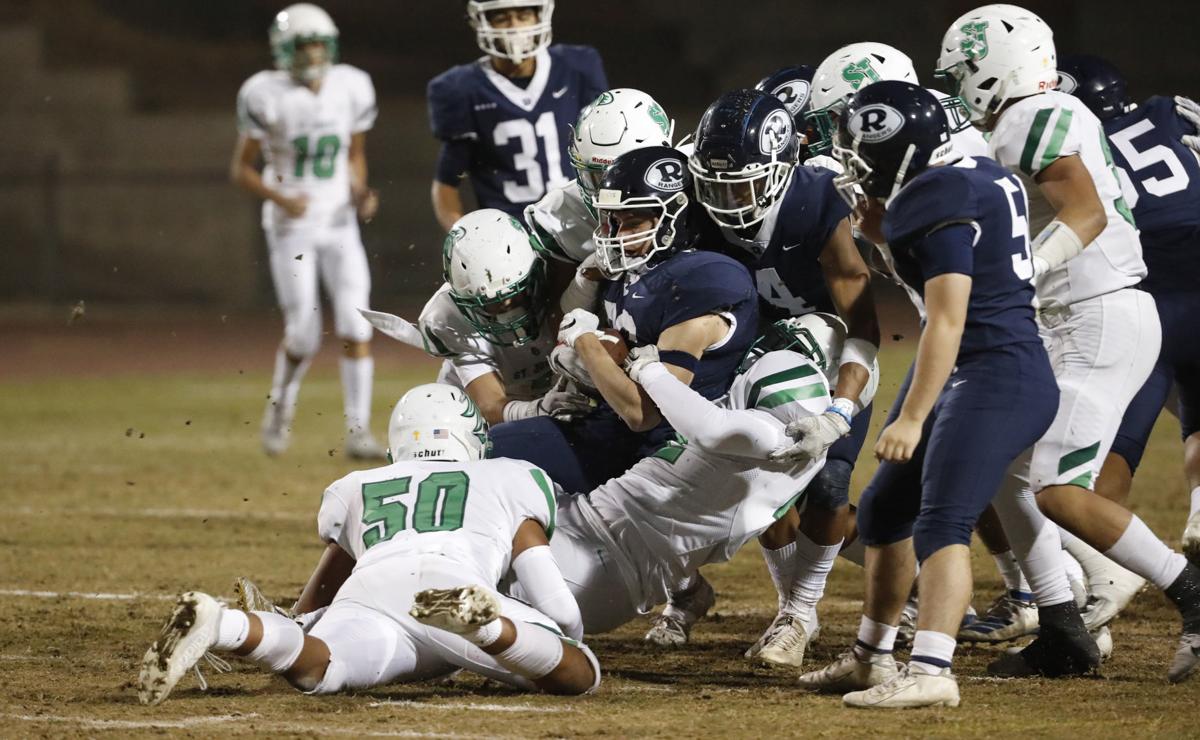 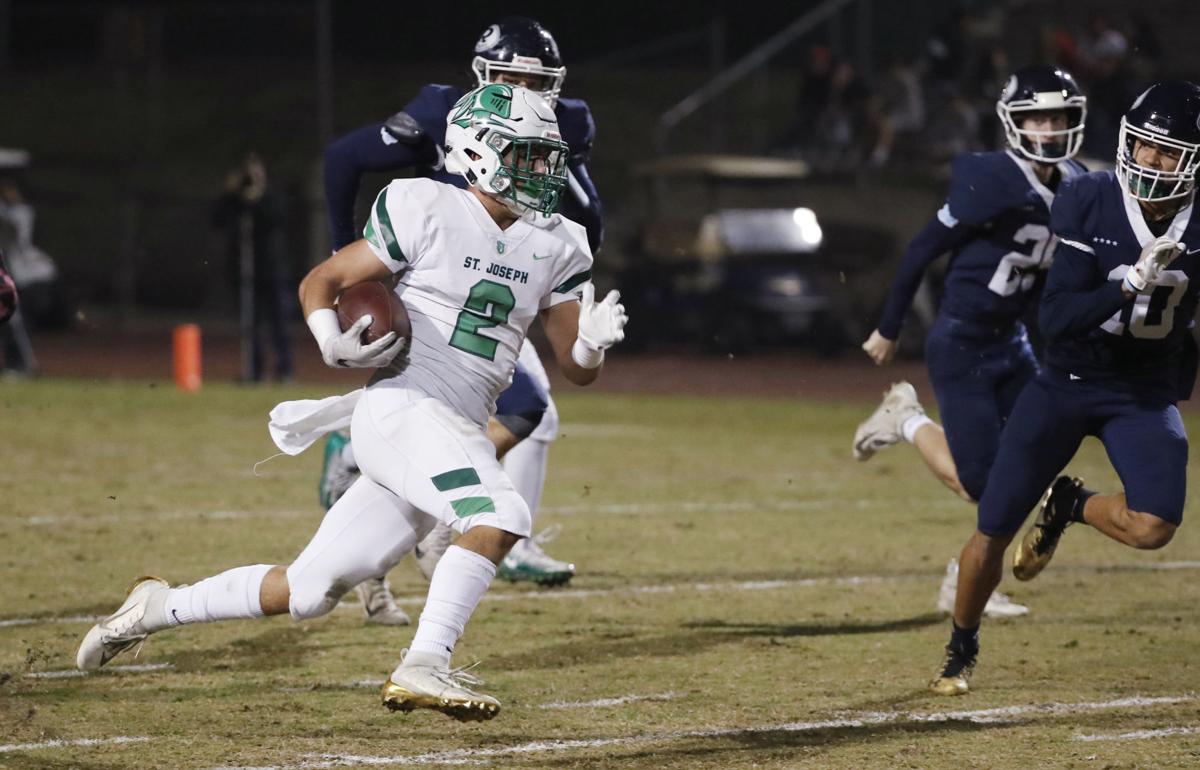 St. Joseph running back Devin Guggia hits the hole for a chunk of yards against Redwood during their CIF playoff matchup in Visalia last Friday. Guggia had 152 yards rushing and three touchdowns to earn Male Athlete of the Week honors on Monday.

The streak is now at seven.

And the Knights are into the semifinals.

St. Joseph set the tone early and eased past Visalia Redwood 28-21 in the quarterfinals of the CIF Central Section Division 2 playoffs. The Knights will play at Fresno San Joaquin Memorial next Friday in the semifinals of the playoffs.

Yes, this St. Joseph team stood at 2-3 on the year after the Sept. 27 home loss to Lompoc.

And, yes, the Knights haven't lost since.

St. Joseph quarterback Hunter Barnhart, a senior who made his first start with the Knights in that loss to Lompoc, improved to 7-1 as the Knights' starter with Friday's win at the Mineral King Bowl in Visalia Friday.

Barnhart was on the receiving end of the first St. Joseph touchdown of the night, catching a short pass in the end zone on a reverse pass from Mark Crisp, who began the season as St. Joseph's starting quarterback but missed the previous nine games with a broken collarbone.

Barnhart, at 6-foot-2, went up high for the pass and it was tipped up in the air before Barnhart was able to come down with the ball on his back. That score came in the waning moments of the first quarter.

Redwood then put together a drive deep into St. Joseph territory, but Devin Guggia, another St. Joseph junior, intercepted a Ryan Rios pass to end the scoring threat.

The Knights and Rangers then exchanged punts. St. Joseph then drove down with the help of a screen to Guggia, a deep out to Darien Langley and an Noah Skarda catch inside the 10. That drive was capped by Guggia's seven-yard touchdown run for a 14-0 lead two minutes before halftime.

Redwood marched down the field and answered to tighten the score up to 14-7 as Christian Roldan caught a Rios touchdown pass with 23 seconds left before half.

The Knights received the kickoff to start the opening half and used designed runs to Barnhart with Guggia runs sprinkled in. Guggia scored from yards out to put the Knights up 21-7.

Devin Guggia scores from 8 yards out to five St. joseph a 14-0 lead at Redwood. Knights hurried to the line. One stutter step from Guggia and he finds a lane and then the end zone. pic.twitter.com/WvW2U6bpKV

Patrick Heard had a big pass break-up on the Rangers' next drive on fourth down, giving St. Joseph the ball back. That would lead to another St. Joseph touchdown from Guggia, this one from nine yards.

Diamond Davis scored on a 40-yard catch-and-run to cut into the Knights' lead. Michael Madrigal then recovered the onside kick but the Rangers blocked the St. Joseph punt and recovered on the Knights' 3-yard line and would score on a 3-yard Cadin Shafer run a play later, cutting St. Joseph's lead to 28-21 with 1:48 left.

Guggia then recovered the next onside kick and the Knights were just able to run out the rest of the time on the clock. Barnhart, took a fourth-down snap with two seconds left and raced away from the line of scrimmage for a 20-yard loss to make sure the clock hit all zeroes.

Now the Knights will travel to Fresno for the semifinals. There they will face Memorial, which won the 2018 Division 3 title and lost in the State final. The Panthers, 9-1 on the season and the No. 2 seed in the Division 2 bracket, beat Stockdale 42-13 Friday. The Panthers feature, perhaps, the top player in the entire Central Section in Jalen McMillan, a receiver committed to Washington. The Panthers also have Mac Delana, a Fresno State receiver commit. The duo combined for 24 touchdown receptions in the regular season.

Hanford, unbeaten and the No. 1 seed in the division, will host Tulare Western in the other semifinal. Hanford pulled past No. 9 Bakersfield Garces 33-20 Friday night while Tulare Western, the fifth seed, beat No. 13 Dinuba 47-10 on Friday.

More in 2019's Best: Collection of this year's top sports stories on SantaMariaTimes.com (9 of 15)

The Hancock College football team bid farewell to the Pacific League Saturday by putting the wrap on a third straight unbeaten league campaign.

So, what is St. Joseph's reward for a playoff upset on the road? Well, a shot at an even bigger upset. The Knights play at Fresno's San Joaquin Memorial tonight in the semifinals of the CIF Central Section playoffs and Joe Bailey will have LIVE coverage from the game right here.

St. Joseph running back Devin Guggia hits the hole for a chunk of yards against Redwood during their CIF playoff matchup in Visalia last Friday. Guggia had 152 yards rushing and three touchdowns to earn Male Athlete of the Week honors on Monday.