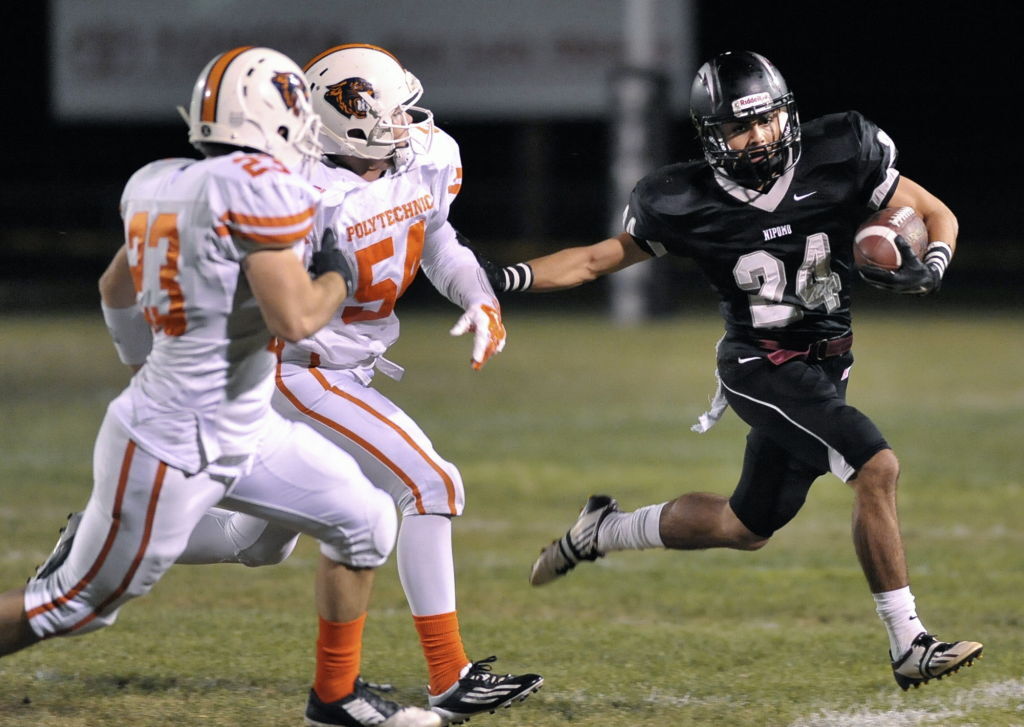 Nipomo's Nick Kimball runs with the ball during a CIF Southern Section Northwest Division game against Pasadena Poly in the semifinal round of the playoffs on Nov. 29, 2014. Kimball had 21 touchdown catches in his senior season in 2014 and was named the All-Area MVP that year. 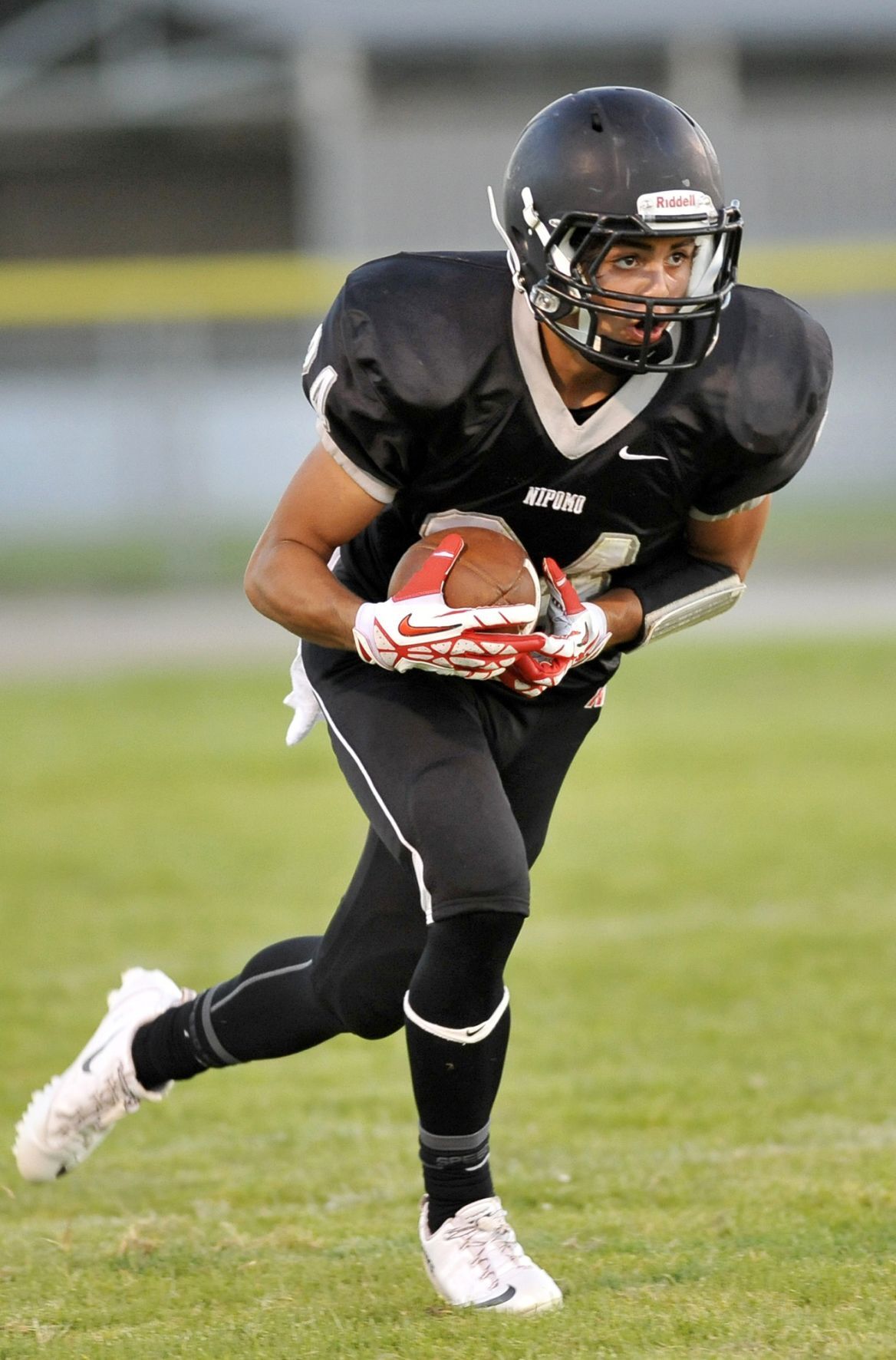 Nipomo's Nick Kimball carries the ball against Pioneer Valley during the opening game of his junior season in 2013. 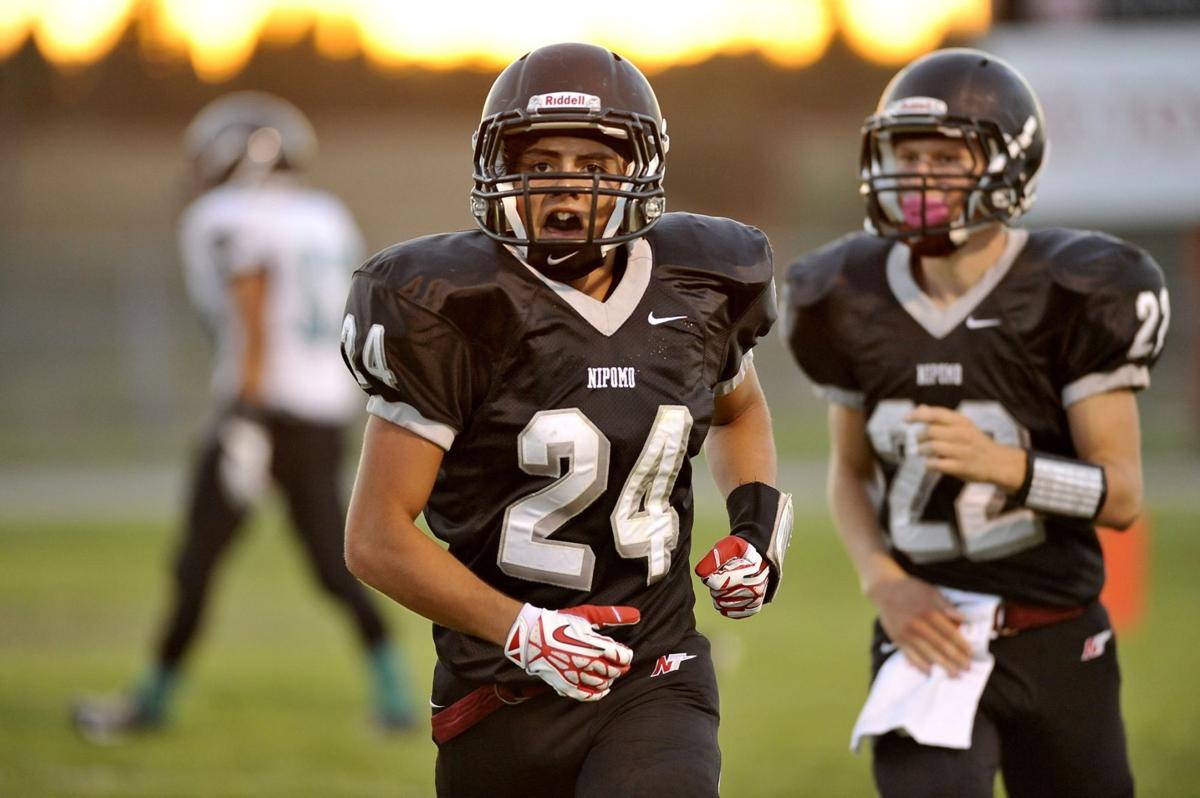 Nipomo's Nick Kimball reacts after scoring against Pioneer Valley during the opening game of his junior season in 2013. 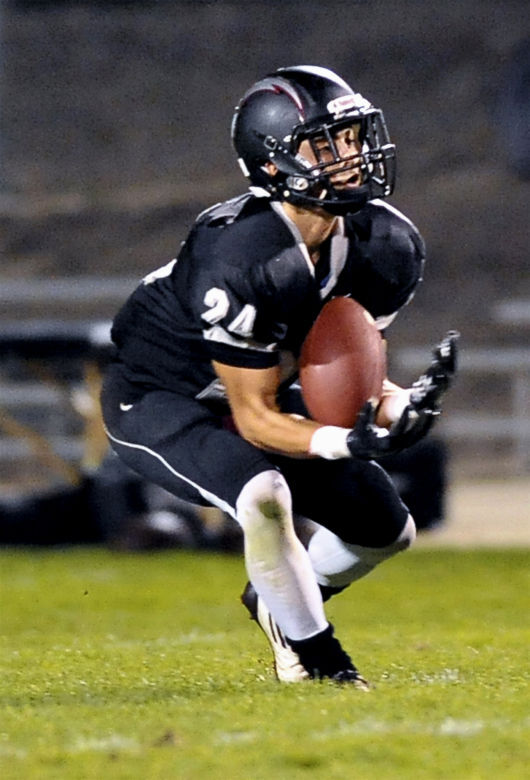 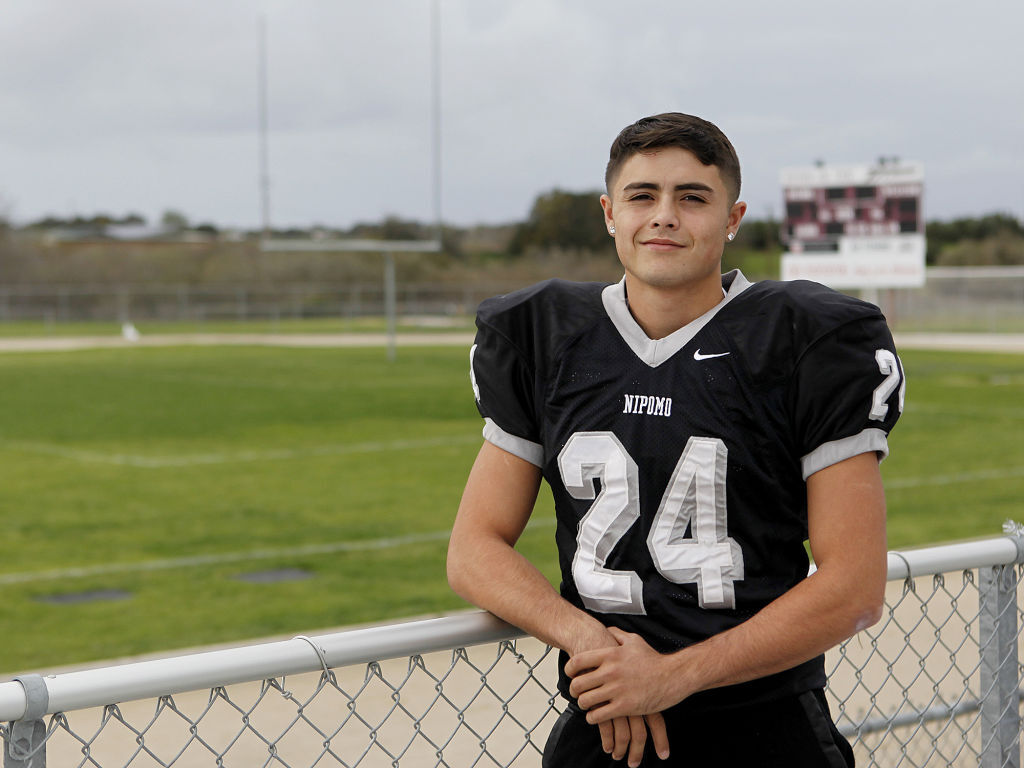 In fact, his senior season was one of the better all-around campaigns the area has ever seen.

Teaming up with standout quarterback Matt Albright, Kimball hauled in 21 touchdown passes in 2014.

He had a touchdown catch in 11 of the Titans' 14 games. He twice made four receptions for touchdowns in a game, including his five-catch, 197-yard performance in a playoff win at Shadow Hills. Kimball had six games with at least two touchdown catches.

The senior finished that season with 52 catches for 1,240 yards and the 21 scores, averaging about 24 yards a catch.

There's more, though. Thanks to inconsistency and injuries in the kicking game, Kimball also handled most of the Titans' punting and place-kicking duties that year.

The highlight of Kimball's season, however, was the team's success. Kimball's play helped the Titans win the Northern League title and advance to the CIF Southern Section Northwest Division title game, which they won 22-19 over Arrowhead Christian on Dec. 6, 2014.

Of course Kimball had the game-winning play in that contest, taking a short swing pass 39 yards to the house to help Nipomo seal the win.

In a CIF-SS Division 4 title game in November of 2015, the top-ranked Warriors scored 11 of the last 12 goals and eased to an 11-2 win, completing a back-to-back divisional title run under Righetti co-coaches Kyle Shaffer and Rob Knight.

"I expected to play both ways. I didn't expect to play defense as much but whatever helped the team is what I did," Kimball said after being named the All-Area MVP in 2014. "I did whatever I could do to contribute to the team winning."

Kimball paired up perfectly with his quarterback Albright, who threw 62 touchdowns in two seasons as the Titans' starting quarterback.

"I think it's a great choice. I just tried to give him a chance to make a play with the ball," Albright said in 2014 of Kimball being named All-Area MVP. "Every time he got the ball in his hands he had a chance to score, and he did score most of the time. Almost 50-percent of the time he touched the ball he scored."

Kimball caught 31 touchdown passes from Albright in two seasons. In all, Kimball had 82 catches over his career, meaning, with 31 touchdown catches, nearly 38 percent of his receptions went for touchdowns.

St. Joseph's Ryan Blaise Smith is one of the few receivers with a better mark than Kimball's 2014 campaign. Smith was named the All-Area MVP in 2000 after he led the state in catches (99) and yards (1,634) as he set single season St. Joseph records for those categories as a senior.

Kimball went on to play at Hancock College and earned All-Conference Second Team honors as a freshman for the Bulldogs in 2016 when he finished with 25 receptions for 367 yards and four touchdowns. Kimball had 29 catches for 365 yards and a score in his sophomore season at Hancock. Kimball then transferred to the University of LaVerne, where he and Albright played last year.

Nipomo's Nick Kimball runs with the ball during a CIF Southern Section Northwest Division game against Pasadena Poly in the semifinal round of the playoffs on Nov. 29, 2014. Kimball had 21 touchdown catches in his senior season in 2014 and was named the All-Area MVP that year.

Nipomo's Nick Kimball carries the ball against Pioneer Valley during the opening game of his junior season in 2013.

Nipomo's Nick Kimball reacts after scoring against Pioneer Valley during the opening game of his junior season in 2013.