Player of the Decade: Bradley Mickey was the ultimate weapon at Arroyo Grande High
Share this
1 of 5 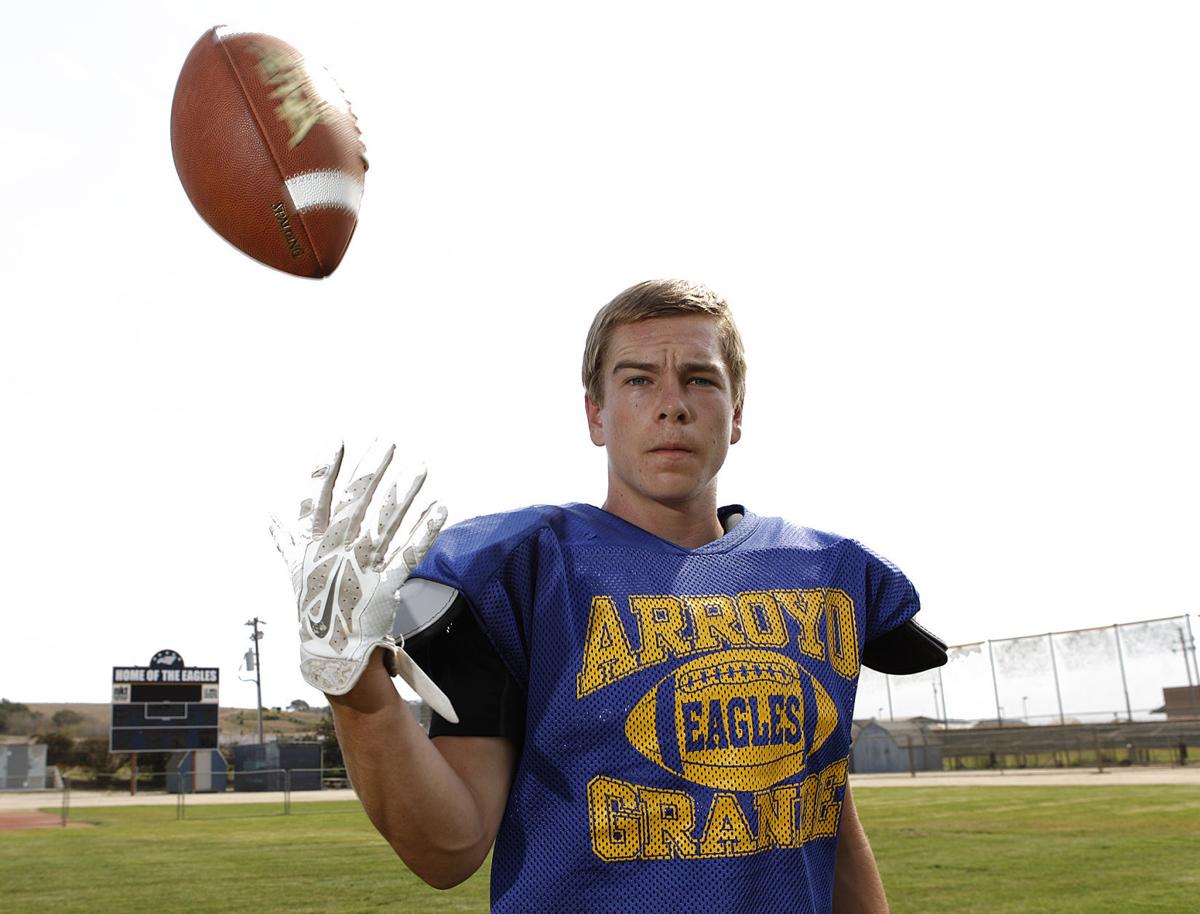 Arroyo Grande High senior Bradley Mickey was named the Santa Maria Times All-Area MVP in 2015. He was the All-Area Defensive Player of the Year in 2014. 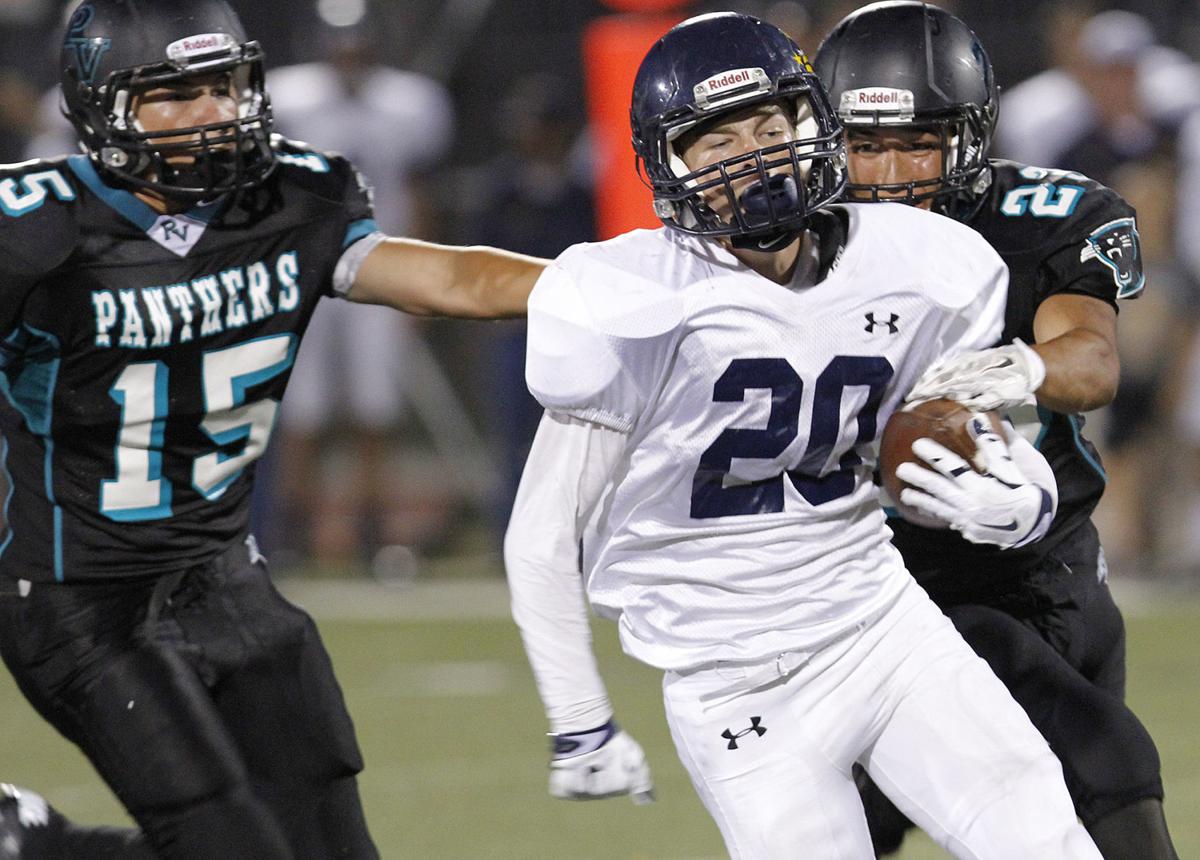 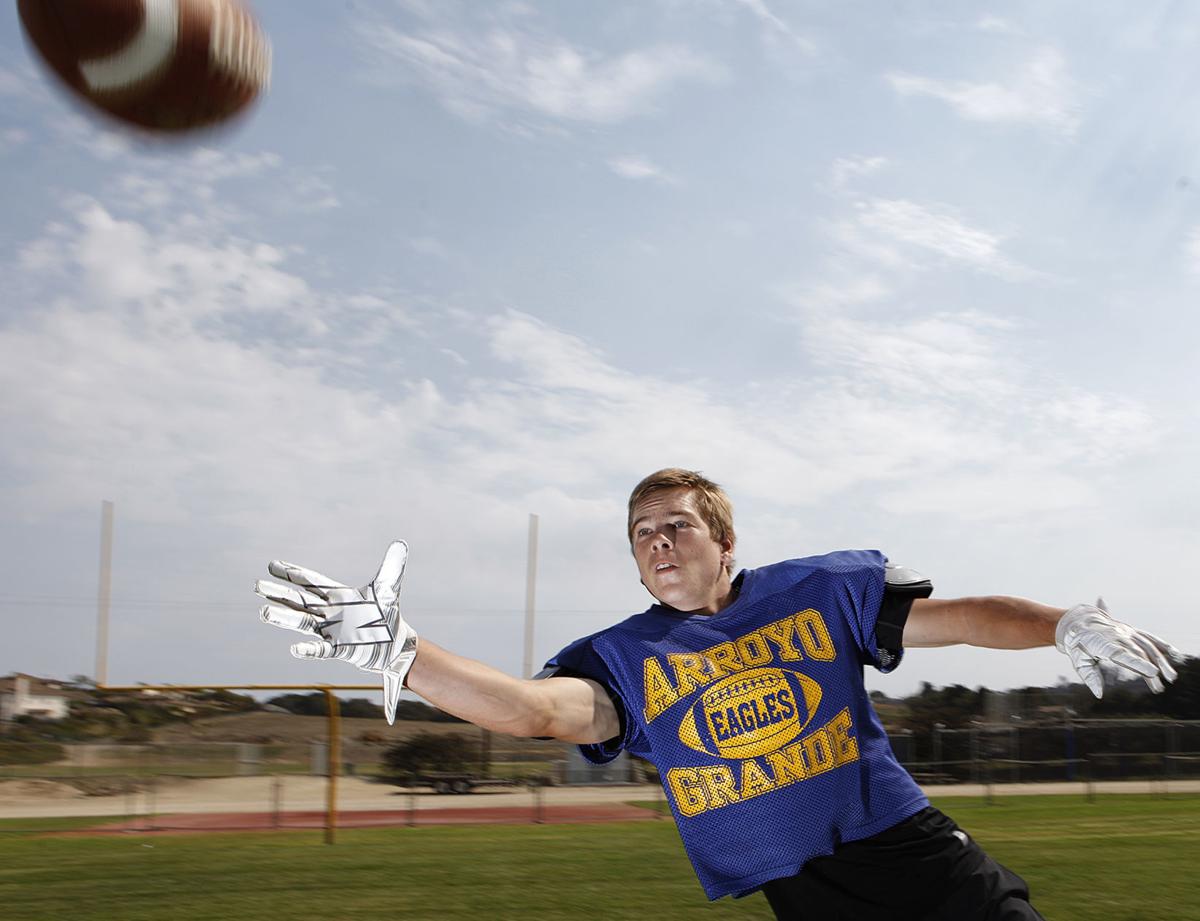 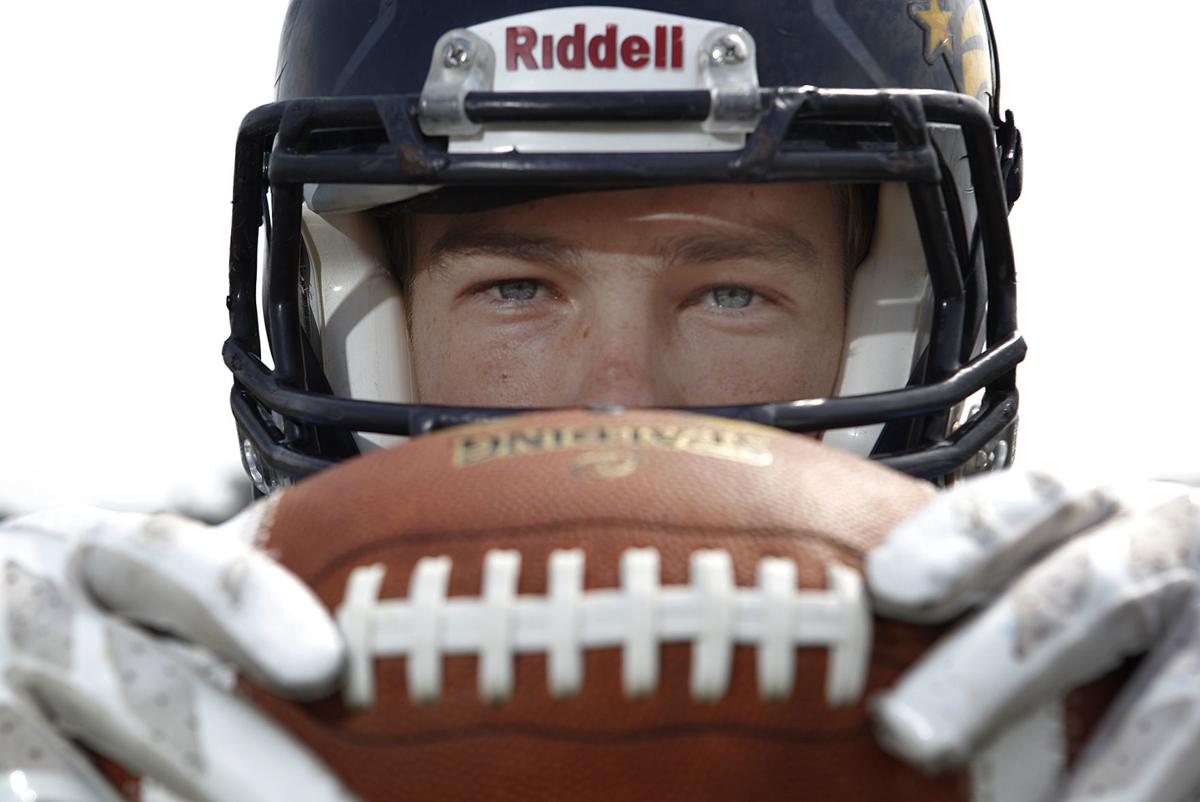 Arroyo Grande High senior Bradley Mickey pulled out all the stops in 2015, leading the Eagles in a dominant PAC 5 League championship season. Mickey led the Eagles in rushing and receiving yards while also playing top-level defense, with 69 tackles and six interceptions. He was named the All-Area MVP that year. 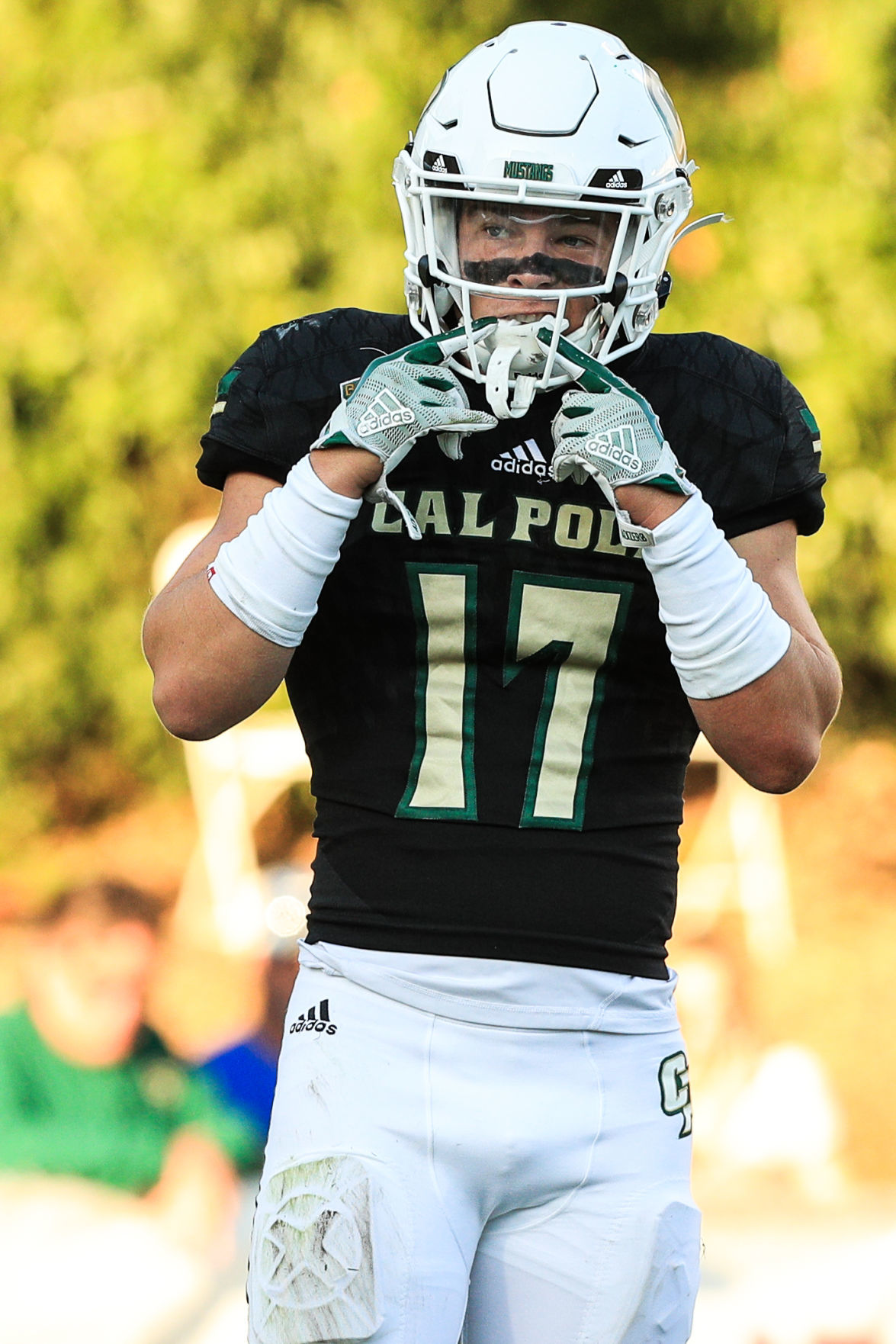 He also led the Eagles in rushing yards. And total touchdowns.

While doing all that on offense, Mickey was also working on defense. He led his team in interceptions and was third in tackles that year as the Eagles went 11-2, won a league championship and made the CIF semifinals.

Mickey would be named the All-Area MVP that year as well.

But Mickey wasn't a one-hit wonder. That was pretty much a typical season for the current Cal Poly defensive back.

Mickey is the sixth nominee for Player of the Decade. The list of nominees was compiled by the sports staff at the Santa Maria Times, Lompoc Record and Santa Ynez Valley News, who polled area coaches. Players from Northern Santa Barbara County and San Luis Obispo County are eligible.

Those career numbers likely would've landed Mickey on this list of Player of the Decade nominees.

But, again, Mickey was even better as a defender.

During his three-year varsity career, Mickey intercepted a total of 21 passes. He picked off five as a sophomore, added 10 as a junior and capped his career with a six-piece as a senior. He returned five of those interceptions for touchdowns. He also had a fumble recovery returned for a touchdown.

In all, Mickey broke up 38 total passes in those three seasons.

He scored 30 touchdowns during his prep career and amassed over 700 yards on punt and interception returns alone.

"I just don't want to fail," Mickey said in 2015. "Somewhere in the back of my mind I'm thinking, 'Someone else is working hard to take my spot.' Just knowing I have a weakness — I don't want to have any, so I try to get better."

Mickey's individual numbers never told his story. Having a two-way player lead by example was invaluable to former Eagles coach Tom Goossen, who once said it was "impossible" to appreciate what Mickey meant to the team.

"He brings intensity and passion that permeates to the rest of the team," Goossen said after Mickey was named All-Area MVP in 2015. "He brought an unwillingness to give anything but his best. He refused to accept anything but the best he could be at any particular time."

At Cal Poly, Mickey red-shirted in 2016 and played in four games in 2017. He played in eight games in 2018 and 11 games in 2019, finally breaking into the rotation on defense. He has 32 career tackles with the Mustangs and one interception. He is slated to be a senior defensive back this fall.

The rest of the Player of the Decade nominees will be released in the coming weeks. Mickey joins the previous nominees, Arroyo Grande grad Seth Jacobs, former Lompoc High standouts Lavon Coleman and Ainuu Taua, former Santa Maria quarterback Blake Truhitte and former Santa Ynez receiver Gabe Prendergast. Once all the nominees have been announced, readers will have the opportunity to vote for Player of the Decade.

The physical tailback known for his punishing running style once declared himself the 'YAC President' at Lompoc High. He made his declaration shortly after carrying the ball 36 times for 177 yards against Arroyo Grande and standout linebacker Seth Jacobs in 2011. (YAC meaning 'yards after contact', a value all respectable running backs look to build up).

Taua, who graduated from Lompoc High in 2014 and played defensive line and fullback at UCLA, is our second nominee for Player of the Decade. The sports staff at the Santa Maria Times, Lompoc Record and Santa Ynez Valley News polled area coaches for nominees and will allow readers to vote for Player of the Decade after all the nominees have been announced. Arroyo Grande's Seth Jacobs, the first nominee, was announced last week.

We are on a quest to find the Player of the Decade for 2010-2019. We will be publishing profiles on 10 nominees for the honor over the new few weeks. Then we'll ask you, our readers, to vote for the Player of the Decade. The first nominee up is Arroyo Grande's Seth Jacobs. He played quarterback, running back, receiver, tight end, safety and linebacker with the Eagles before eventually earning a starting linebacker spot at Oklahoma State.

Cal Poly and Wyoming have announced another matchup on the football field. The two teams, who met in 2012 at Laramie, play each other on August 30, 2025, also in Laramie inside War Memorial Stadium.

Meghan Abbott will attend Cuesta College. She plans to play water polo and swim for the Cougars.

Central Coast Classic: A look back at Nipomo's CIF title football win in 2014

Nick Kimball caught a swing pass from Matt Albright at the Redlands Arrowhead Christian 30, ran in for the winning touchdown in the third quarter and the Titans held off the Eagles in the divisional title game.

The program will comprise of two groups of children: 17-14 years of age and children 13 years and under.

Arroyo Grande High senior Bradley Mickey was named the Santa Maria Times All-Area MVP in 2015. He was the All-Area Defensive Player of the Year in 2014.

Arroyo Grande High senior Bradley Mickey pulled out all the stops in 2015, leading the Eagles in a dominant PAC 5 League championship season. Mickey led the Eagles in rushing and receiving yards while also playing top-level defense, with 69 tackles and six interceptions. He was named the All-Area MVP that year.